Oh how I love this toy!  Toy World is still a relatively newcomer to the Transformers 3rd party scene, but at least in my opinion has made a big splash already.  Hardbone is their 4th release thus far, and their first Headmaster figure.  Inspired by the G1 Headmaster, Hardhead, Hardbone is a beefed up version.  Despite the horrible, horrible name he was given, this is an excellent figure. 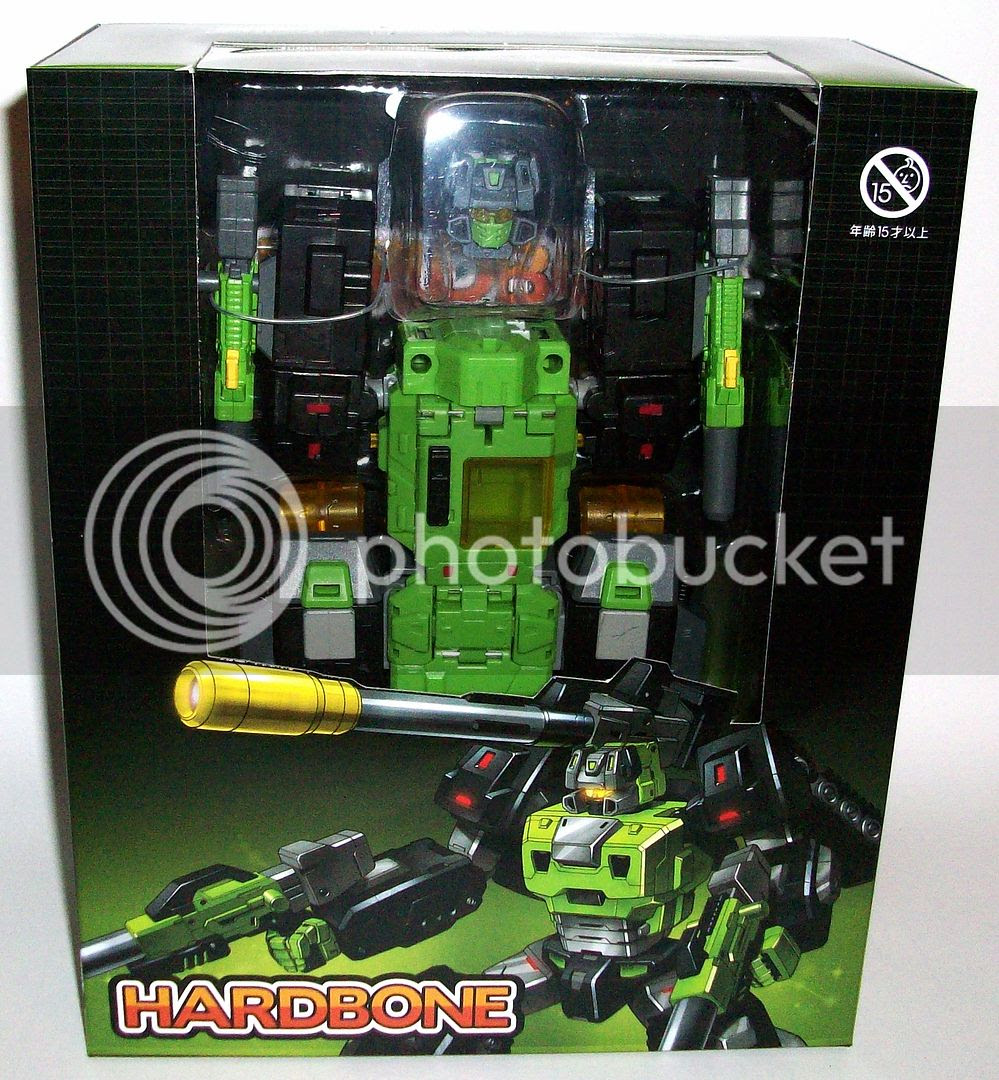 Toy World's packaging for this figure is nicely done.  It's similar to the style of box they used for Hegemon.  The window just shows off enough of the figure (in tank mode) to give you an idea of the toy's size.  The Headmaster robot is also prominently showcased right in the middle. 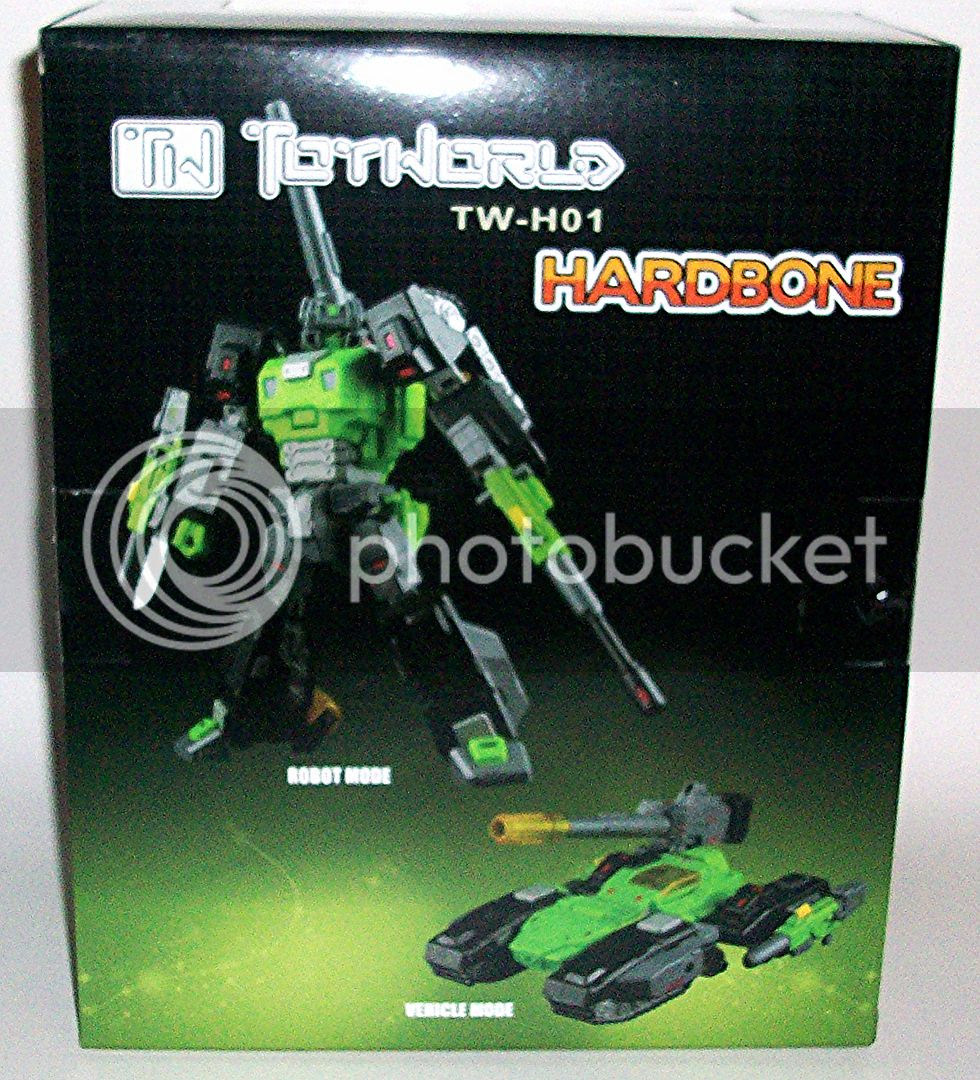 The back of the box is rather bland, but at least you get some pictures of both the awesome robot mode as well as the H framed tank.

One side of the box has some very nice G1-esque box art, while the other side oddly enough shows off the back side of the robot. 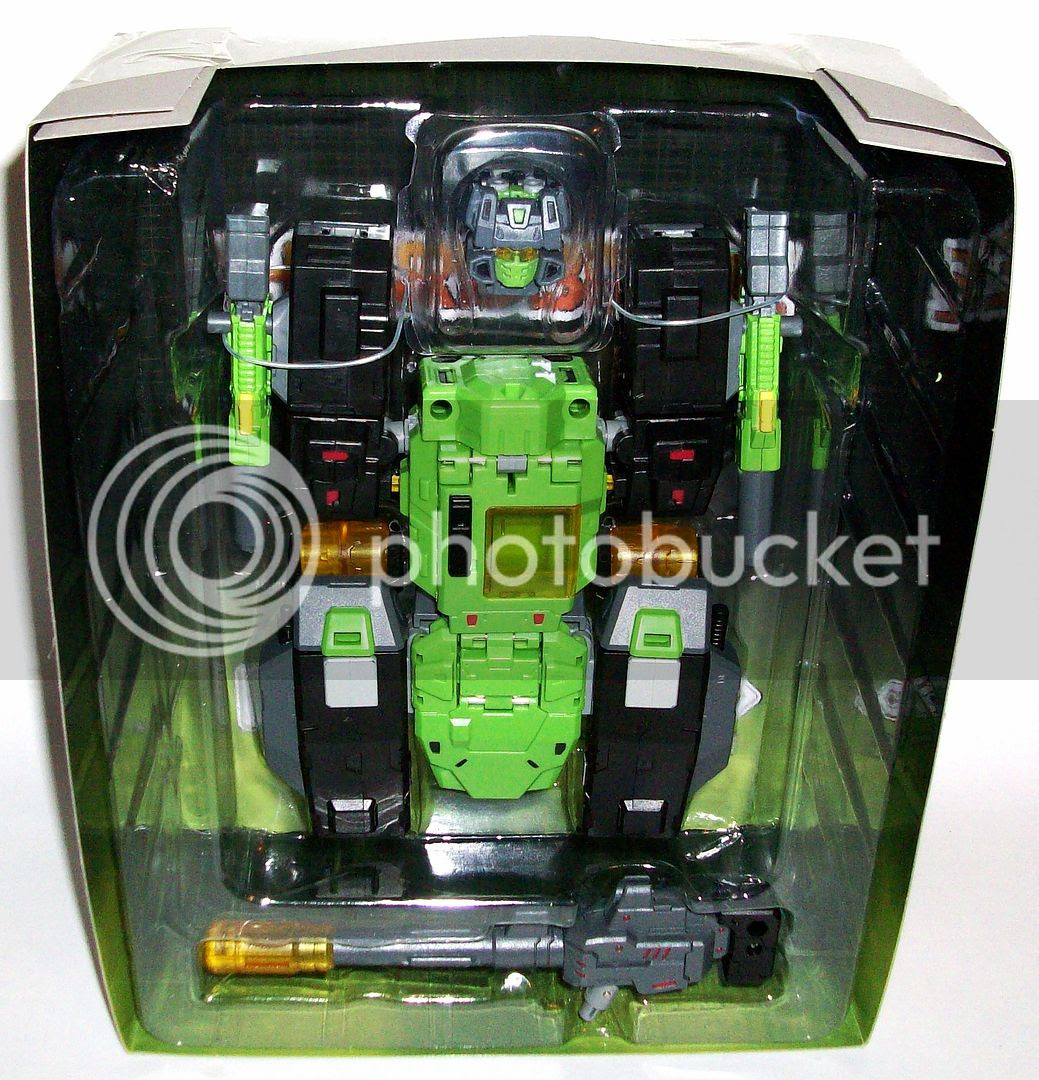 Hardbone comes packaged in a clear plastic tray with (thankfully) with only 2 twisty ties.  The head sits in it's own little tray. 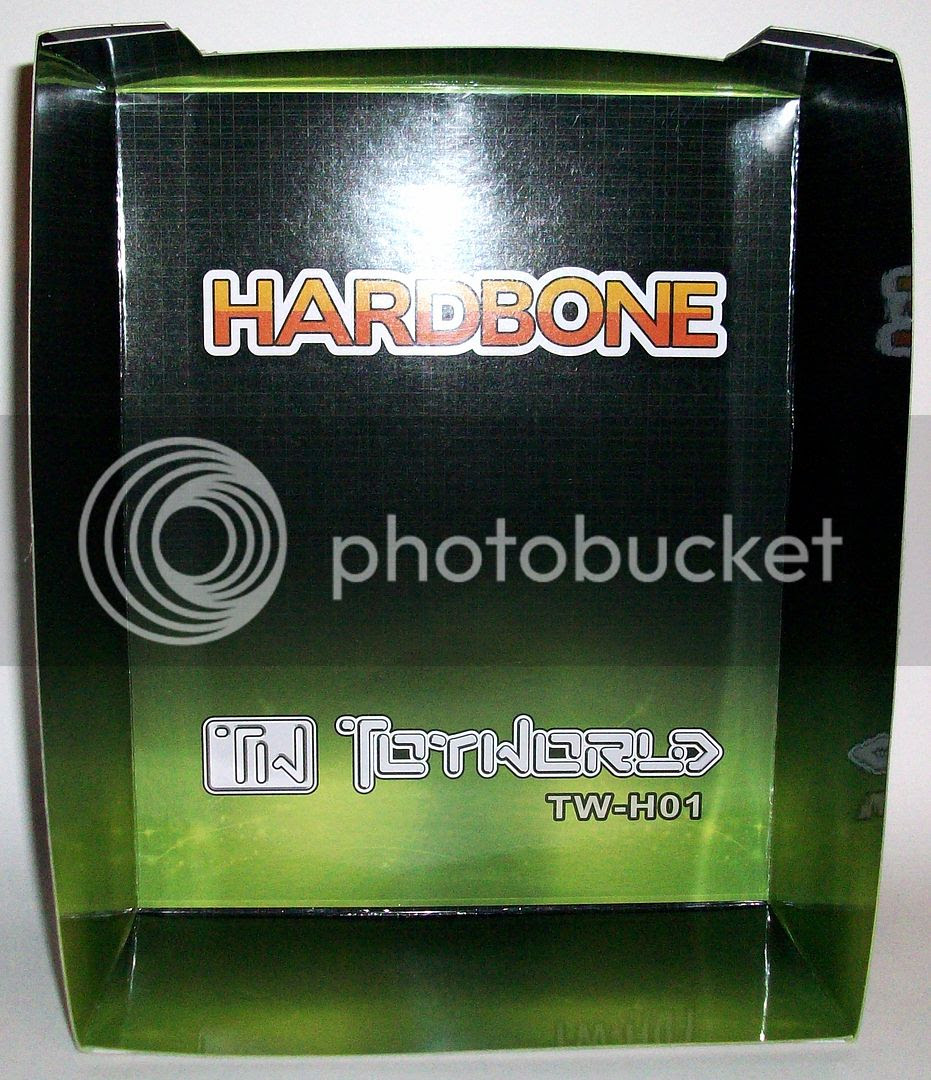 Not sure why I took this picture since the box's tray doesn't feature any cool art like TFC's interior trays, but here you go! 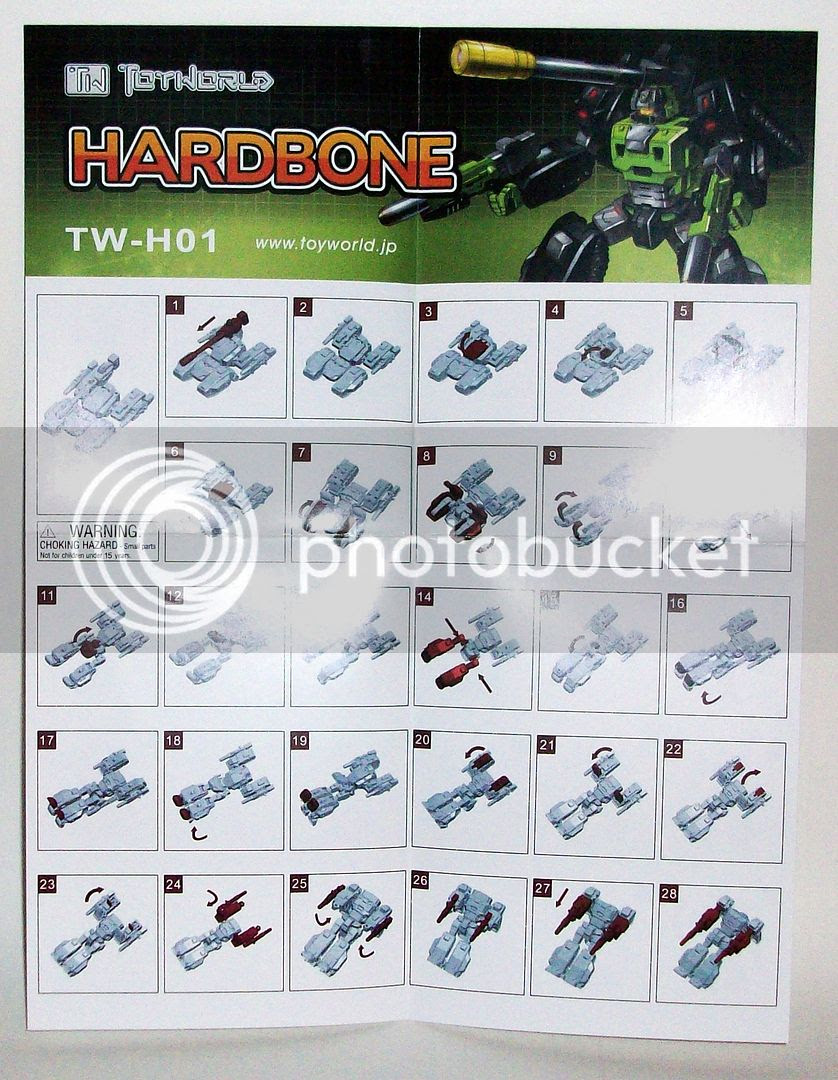 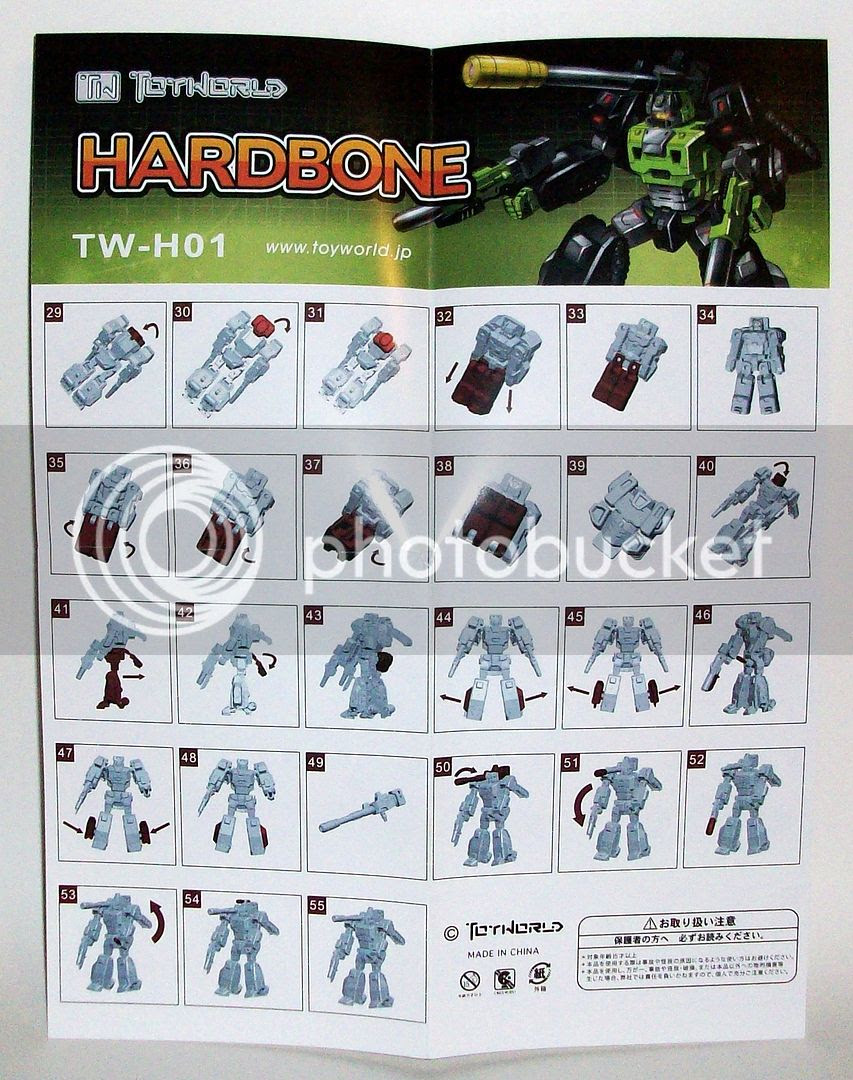 The 2 sided instruction sheet is rather plain and simple, however the images are pretty small.  Thankfully I didn't have any trouble following the transformation steps. 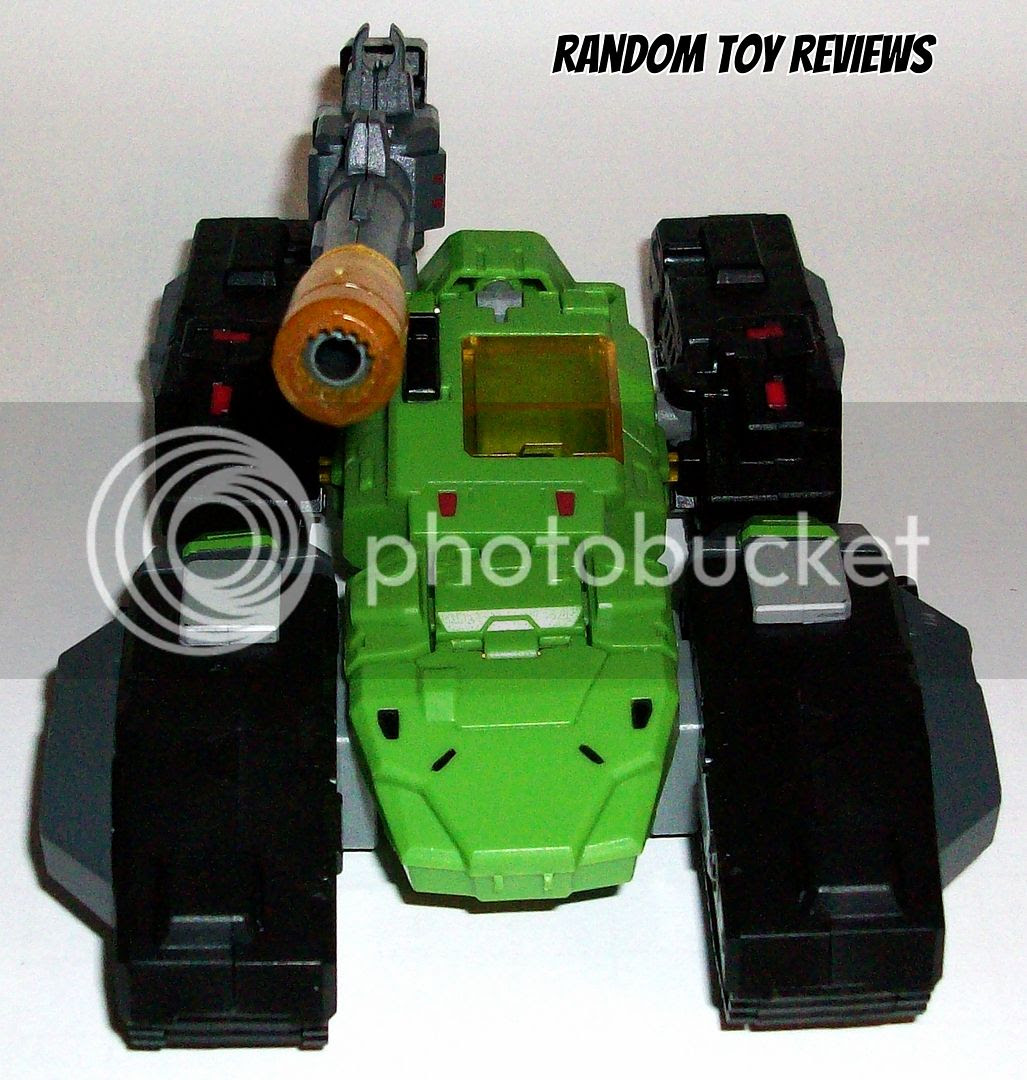 Hardbone keeps the same H frame layout in tank mode that G1 Hardhead used.  I was never a big fan of this style of tank until Armada Megatron was released.  I really like the way the tank looks, but it does have one small problem.  In the middle of the tank is a ratcheting joint that is used for the robot mode.  It seems that is joint is just a bit off and it prevents the front half of the tank from sitting firmly on the ground.  I was really disappointed with this, but it seems that with subsequent transformations this joint doesn't seem to be giving me this problem as much. Looking at the sides of the tank you can really get an idea of just how large his cannon is.  It has a great looking sculpt.  The cannon pegs into the tank via a bendable peg.  Beware that the first time you plug the cannon into the tank it is a very tight fit.  Because the peg swivels it also makes it really tough as it keeps wanting to bend as you insert it into the peg hole.  Thankfully though once plugged in you won't have to take it off as it moves out of the way for transformation.  If you don't like the orange translucent tip on the cannon, don't worry...it's removable.  More on that later though.  The same orange plastic is used throughout the toy, but mostly seen in tank mode.  The small wheels embedded in the tank treads, the rollers behind the tank treads and the canopy all use the translucent plastic. 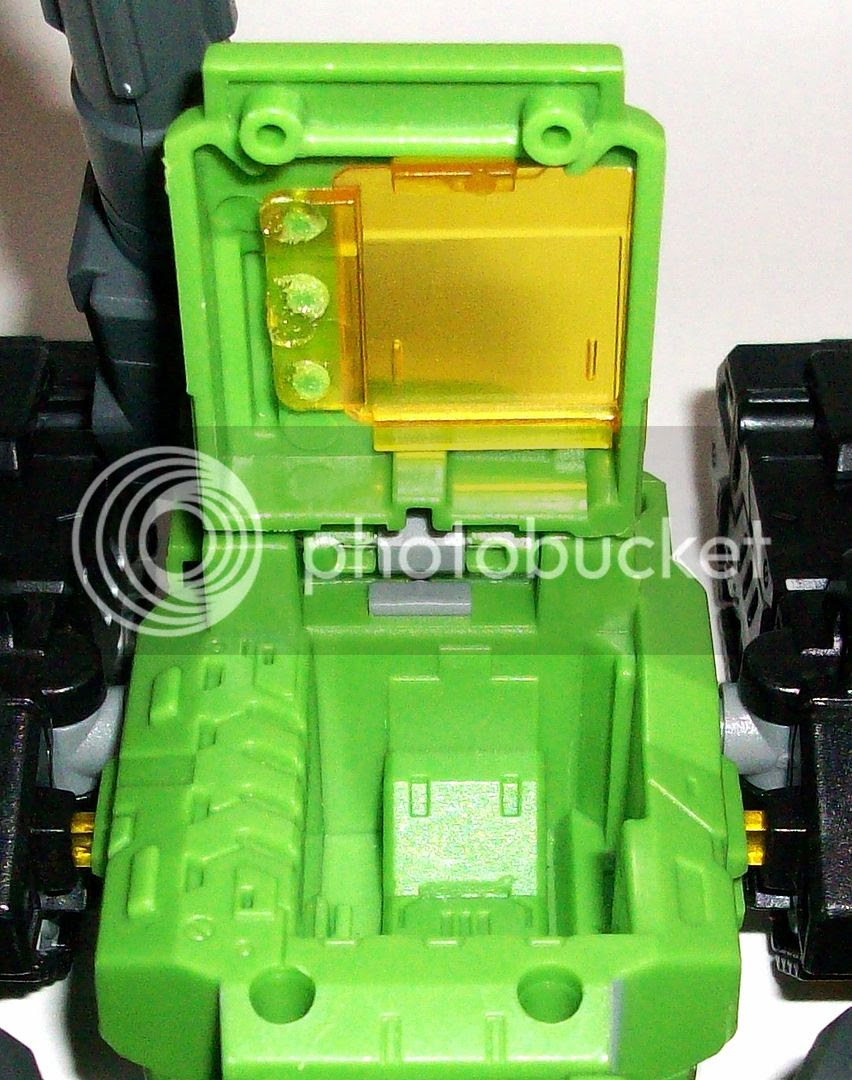 Great detail was used in the cockpit area as well.  Sorry I didn't photograph the Headmaster sitting inside...I was in too much of a hurry to transform this sucker!

Hardbone comes with two identical rifles.  Thanks to the peg holes on the sides of the tank treads you can arm him that much more while in tank mode.  The rifles come pegged into the rear holes right out of the package and they look best in that position, however you can place them in the front set of holes if you wish. 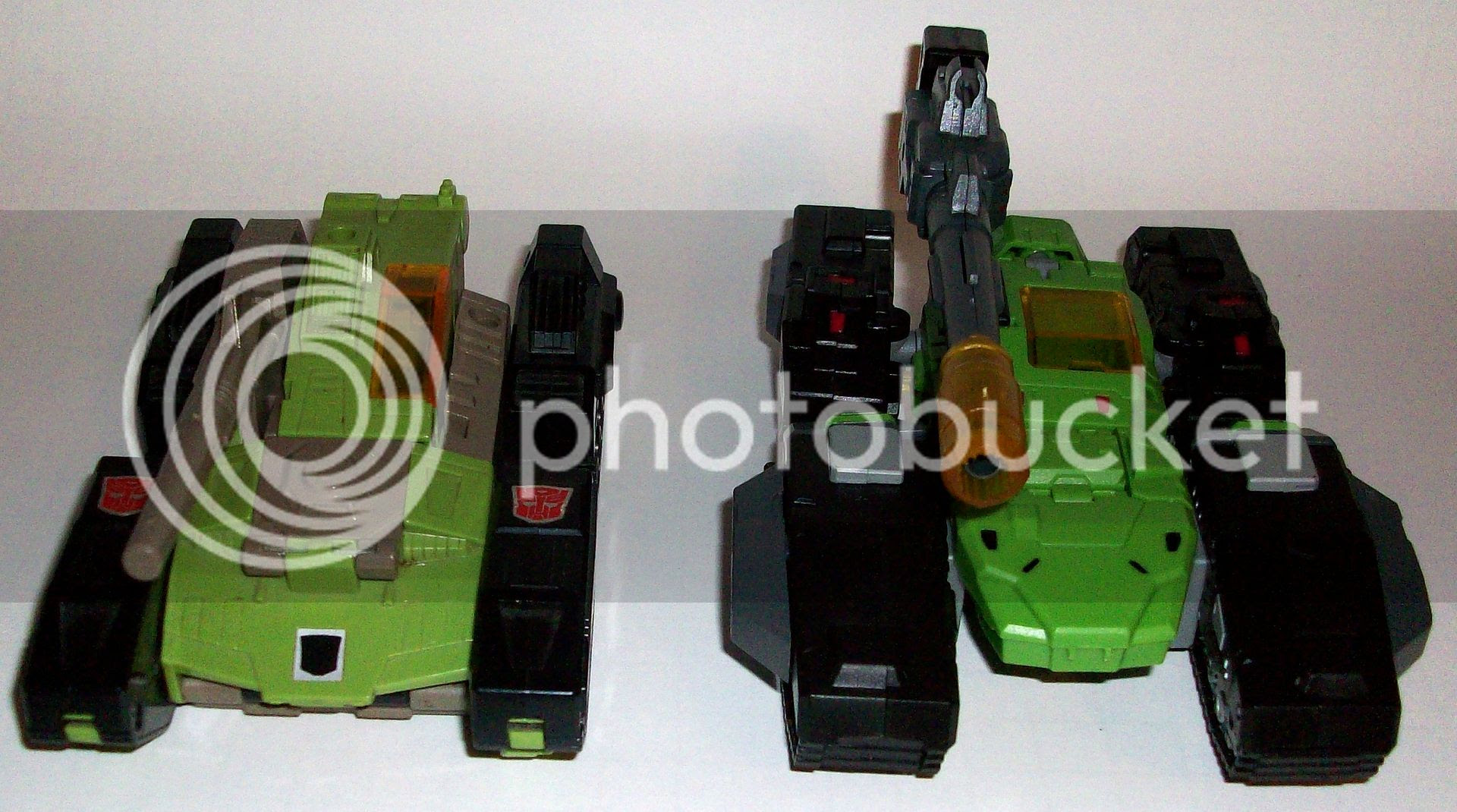 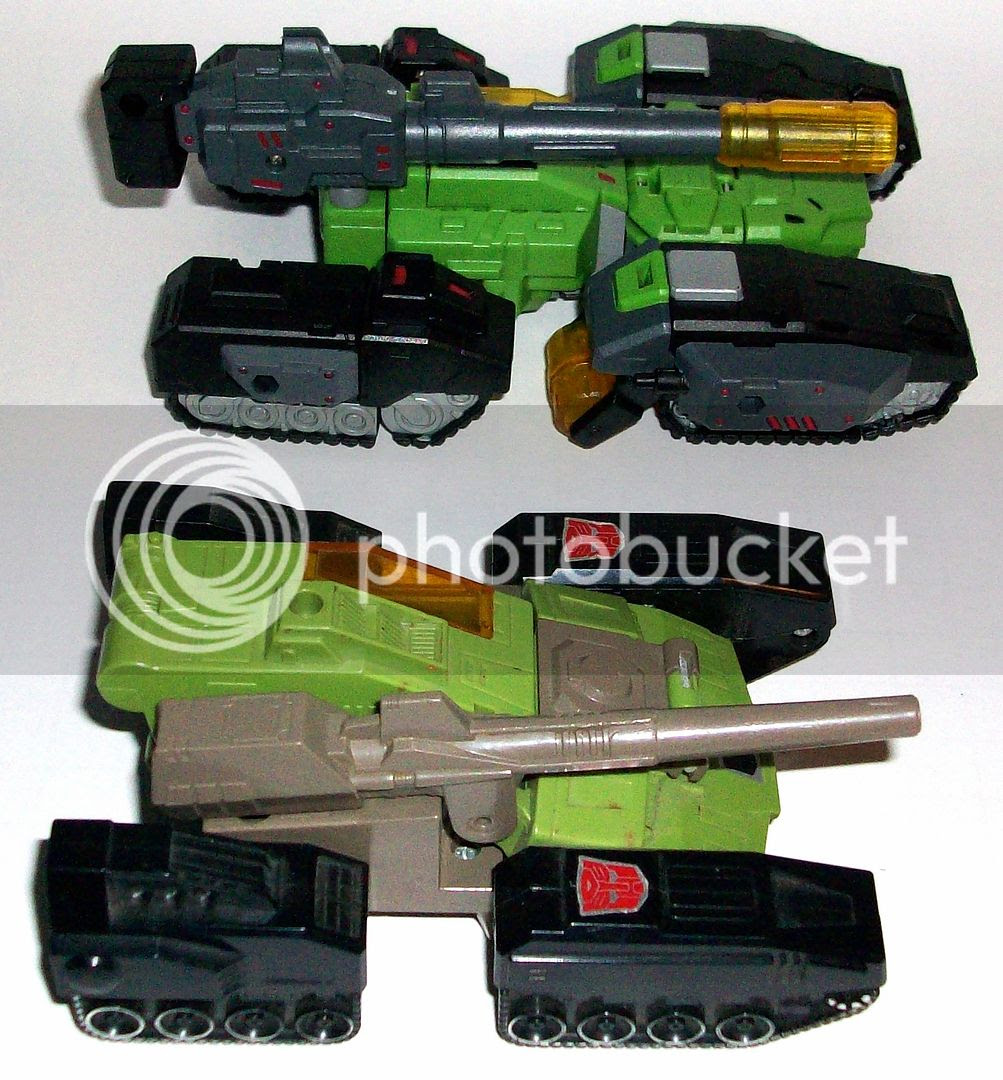 This review wouldn't be complete without having some comparison shots with G1 Hardhead.  The original toy really grew on me once I assembled all of the Autobot Headmasters, but I've gotta say that Hardbone puts Headhead to shame.  While the green on Hardbone is more lime than olive, it looks good with the big black tank treads.  Hardbone needs some big red Autobot stickers so I need to look into that, but there really is no comparison.  Toy World has done a fantastic job upgrading this classic character. 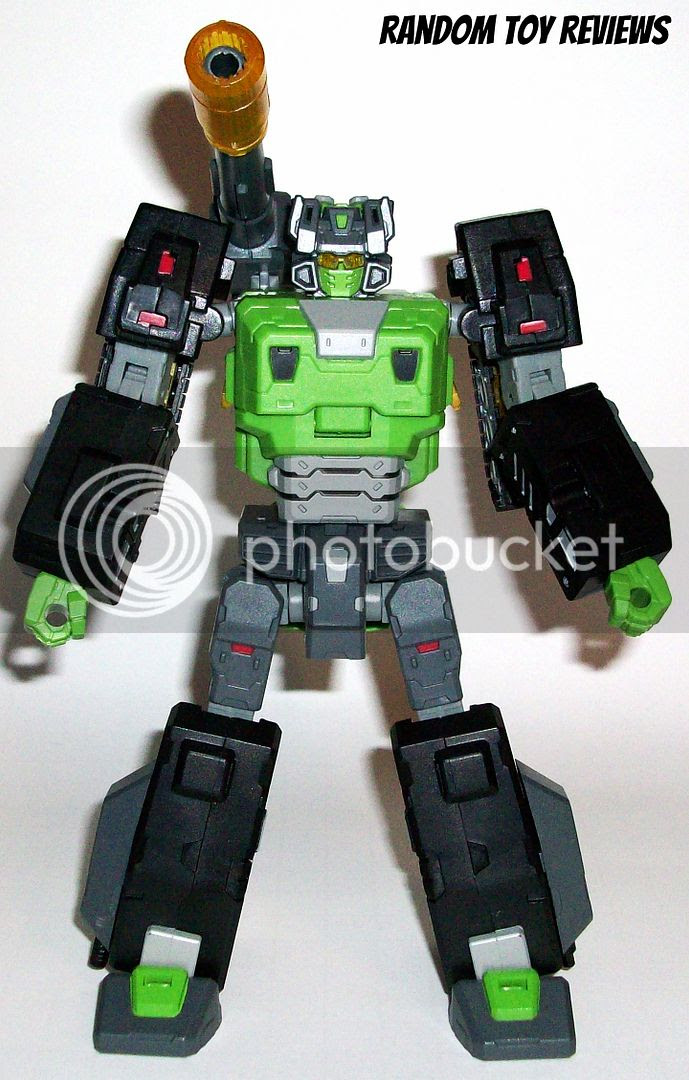 Transformation is rather straight forward, but I did have a hard time pulling out the panels embedded in the treads.  Once I got one side popped open it was a fairly easy transformation, but full of many steps.  What is interesting about this figure is the different type of joints Toy World used to give Hardbone a good range of articulation.  His shoulder joints have resistance when pulling the arms up and out to a certain point, then it kind of clicks.  At first I found this odd and not very appealing, but the more and more I've messed around with this figure the more I liked the shoulder joints.  The hips feature the same style joints.  The elbows and waist use ratcheting joints, while the wrists, thighs, toes and heels feature swivel joints.  The knees feature traditional hinge joints.

I didn't photograph it, but the chest piece does open up and hinge down just like the old G1 Headmasters.  Instead of showing a ratings meter, Hardbone has what looks like a silver engine molded into the chest. 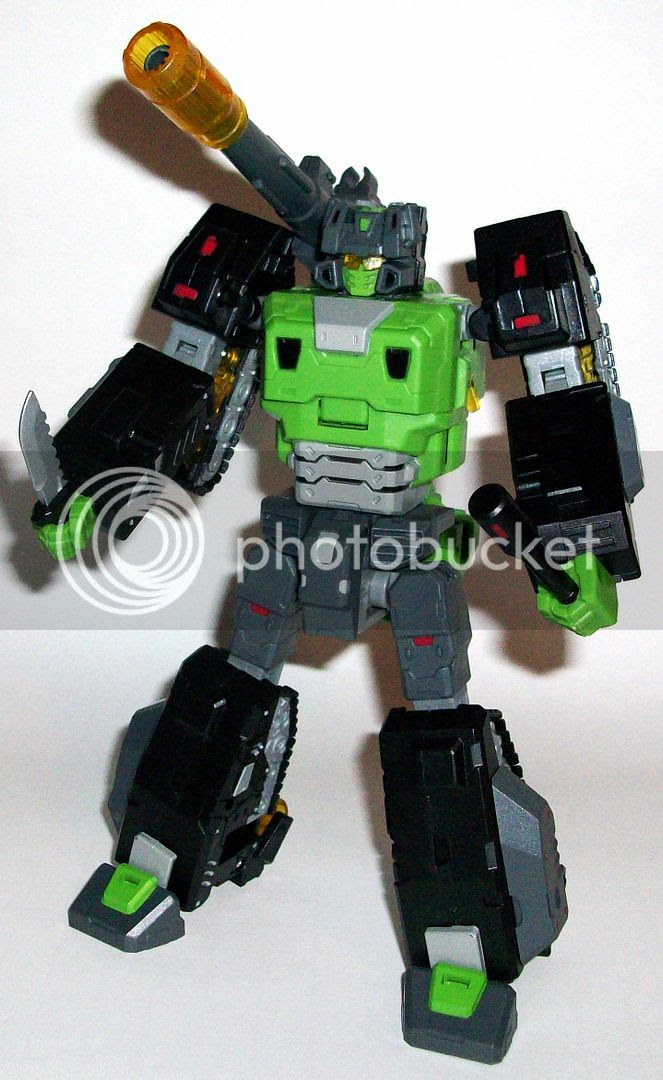 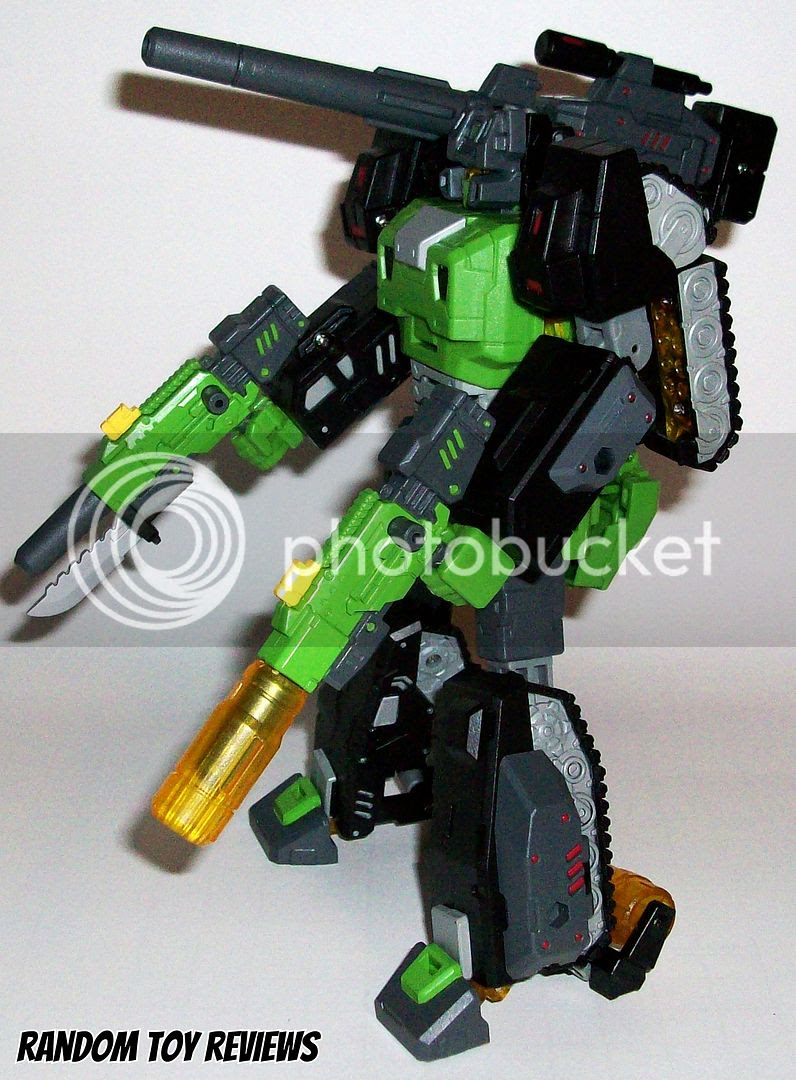 Starting with the knife, the top of the hilt has two small pegs.  These pegs allow you to attach the knife (in either direction) to the underside of either rifle effectively making it a bayonet!  If you look at the top rear portion of the shoulder mounted cannon you'll see that the grenade can clip onto the cannon.  The grenade can also be inserted into the tip of the rifle to give it an extended look (see box images above).

The orange barrel tip is removable and can be placed over the barrel of one of the rifles.  I like the cannon's look without the orange tip as it better resembles the G1 look and the gun just looks beefier with the tip attached. 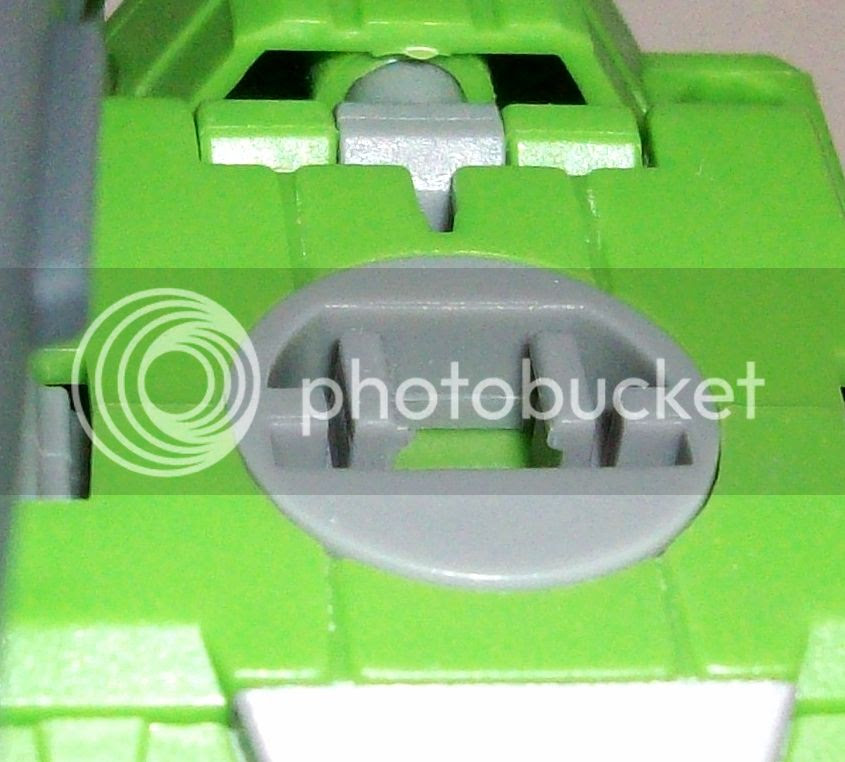 What makes Headmasters so cool of course are the little robots that transform into the head.  Before we look at Hardbone's little robot, let's take a look at how he attaches to the body.  The new Headmaster head plugs into the body using the tiny robot head a la G1, however this port is a separate piece as you may can tell.  What Toy World did here was pretty cool.  Making this port a separate rounded piece allows the port to rotate, giving you the ability to made the head turn a full 360 degrees!  No longer do your Headmasters have to look straight ahead!

I will also mention that the popular Hot Head Headmaster piece by 3rd party company, Head Robots, will work with Hardbone's port.  I don't think it looks good, but it's always nice to have options I suppose.  Sadly the G1 head is not compatible. 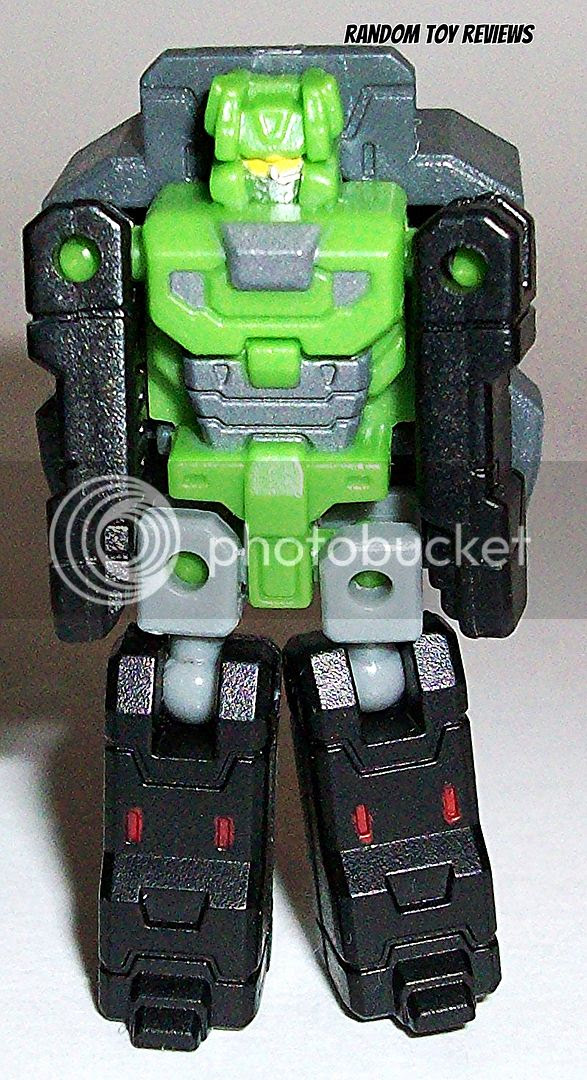 Toy World's first Headmaster robot does share some similarities with Head Robot's Headmaster robots.  The arms, hips and knees feature ball joints.  While this does give improved articulation, I can see the limbs becoming floppy over the years with increased transformation.  Other than that the look of the robot is excellent.  The only negative things I have to say is that the back of the figure is rather 'backpack' heavy.  From the rear view you can still see the robot's face.  There isn't a place that flips down to cover the face like the G1 Headmaster heads featured.  The weight of the robot's upper half also makes it hard to stand the figure up without some support.  They did give the figure some pegs on the back of the feet, but they aren't enough to help stabilize the figure in most cases. 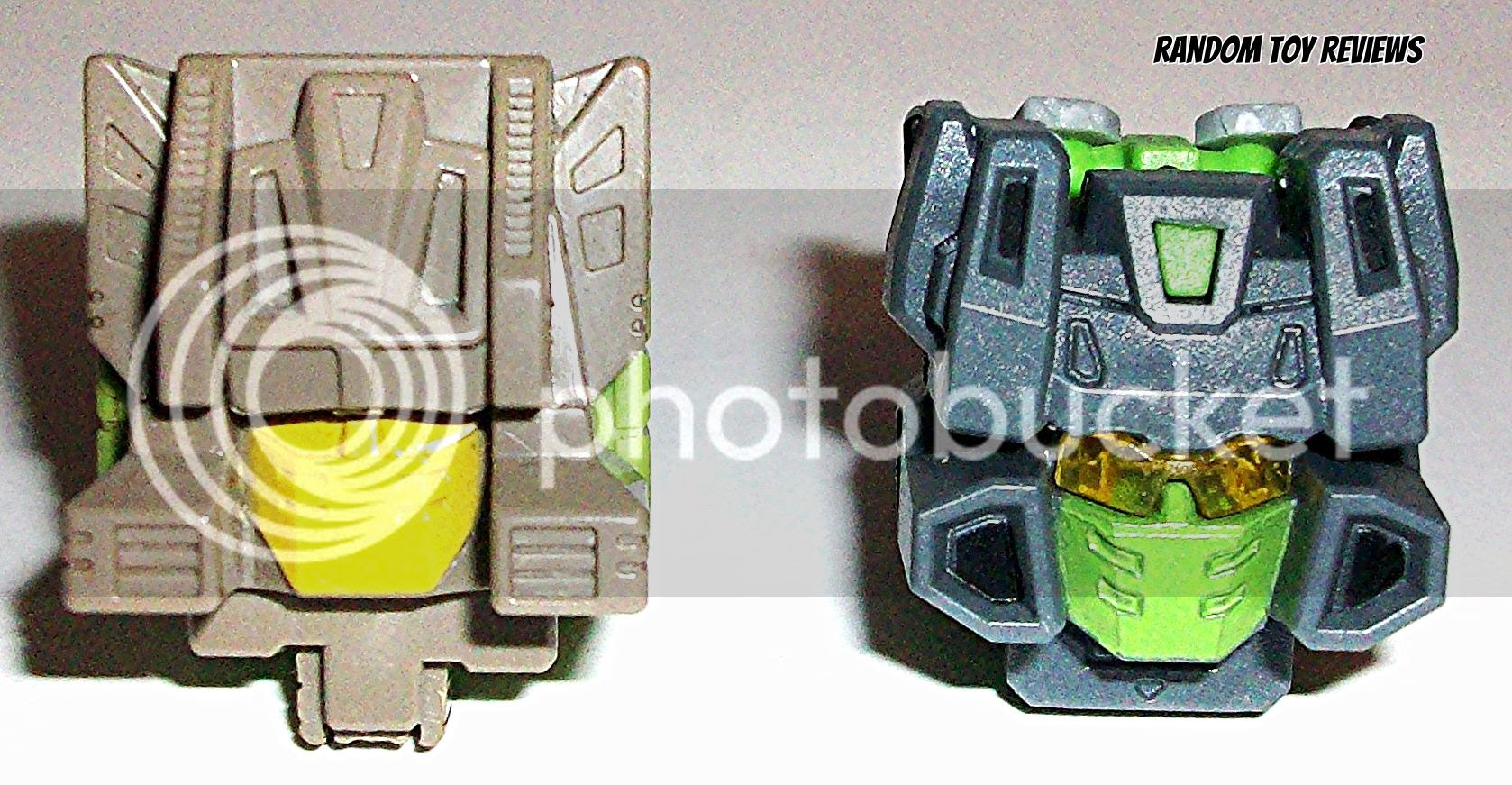 Comparison time again!  Here we have G1 Hardhead's Headmaster partner, Duros and the new version of "not-Duros".  While Toy World did take a few liberties with the design, it doesn't look bad at all.  First of all I like how the head features a charcoal gray as it makes the head better blend in with the rest of the body.  It's not as square as the original which is a plus and the translucent plastic used for the eyes is a very nice touch.  While the eyes don't feature light piping, at least you can clearly see the eyes...something that wasn't so easy to point out on the G1 head.  The mouth plate is dead on to the original look with only the color being changed from yellow to green.  Perhaps Toy World should've kept the original yellow as it may have helped break up some of the green in robot mode, but I'm still happy with the final outcome. In head mode, both of the figures were relatively the same size, but when transformed you can see that Duros is quite a bit taller.  The robot modes don't really favor each other at all, but I still think the new head looks pretty nice.  I did notice that the Headmaster's head/face resembles Hardbone's...nice touch.

The new rifles are a beefed up version of the originals, but identical.  Both new guns feature pegs on either side allowing you to place the guns in either Hardbone's hands or onto his forearms.  I forgot to mention that feature earlier on. 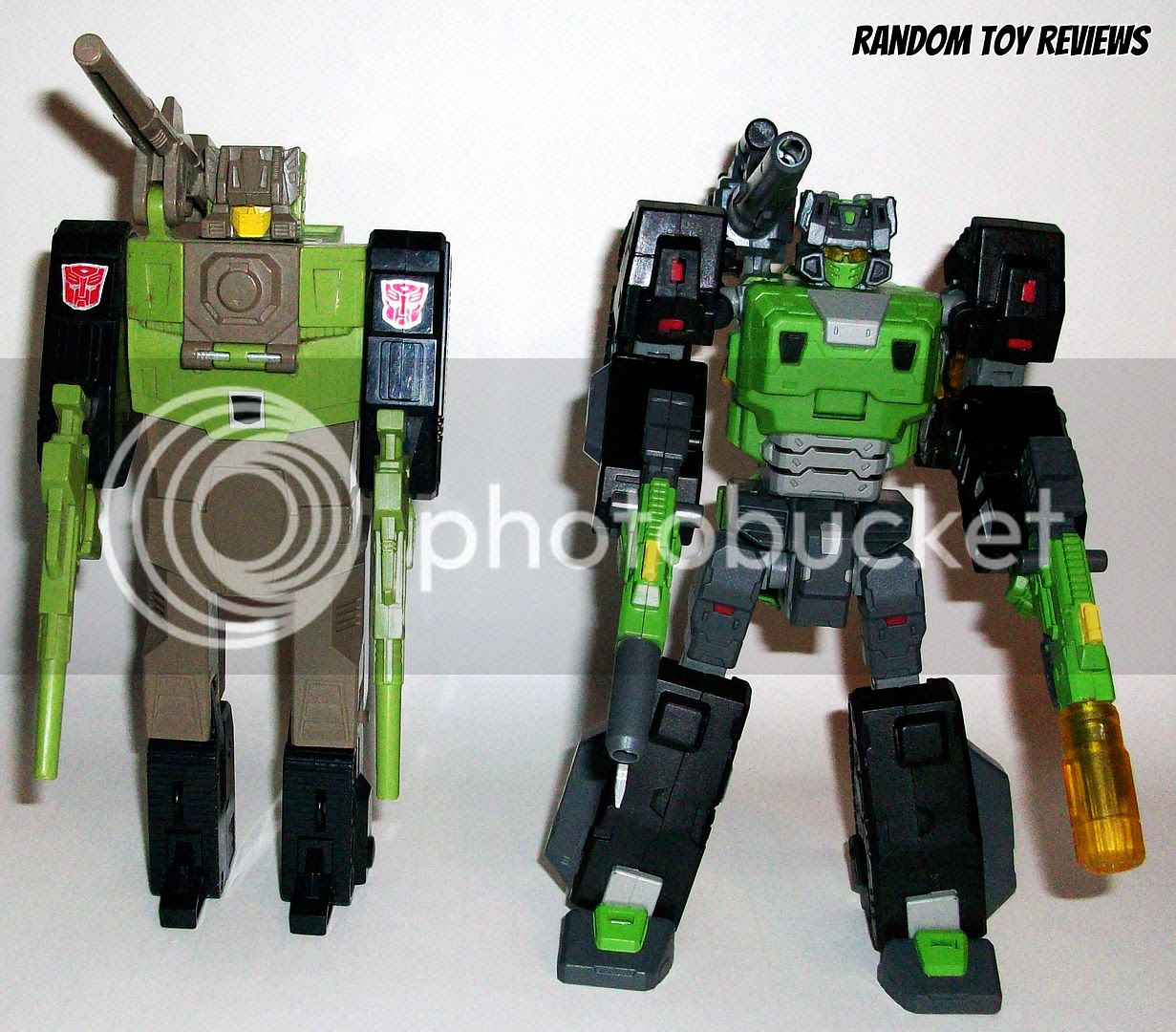 In robot mode both Hardhead and Hardbone a very similar in size.  This surprised me to some degree as Hardbone's tank was a good bit larger.  As I mentioned before there really is no comparison here as to which robot features the better overall design.  I simply love what Toy World has done with this character.

Before I wrap this up I wanted to address one more thing.  A lot has been mentioned about how well will Hardbone scale with FansProject's new Function-X series of Headmasters.  Well, here you go... 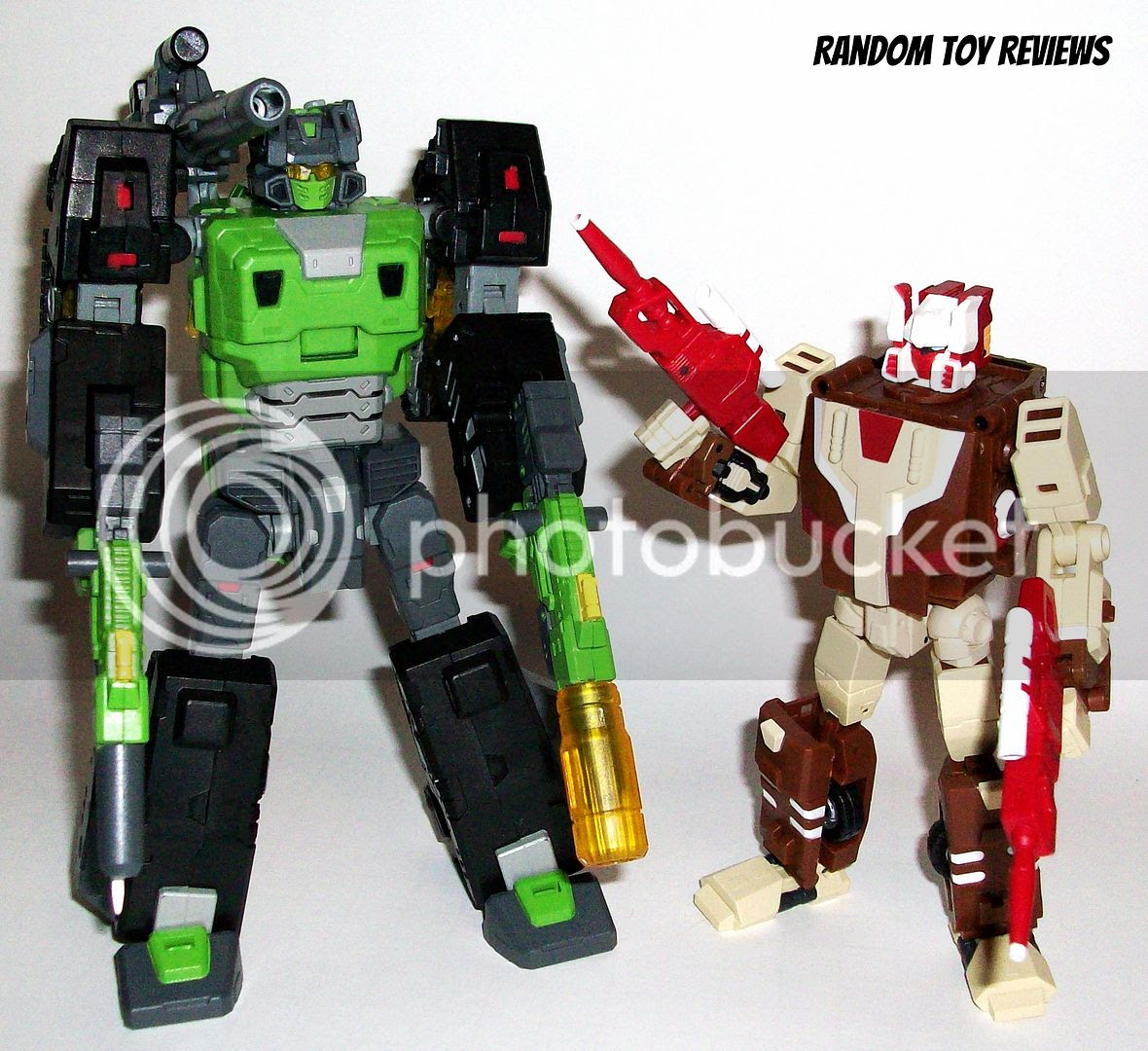 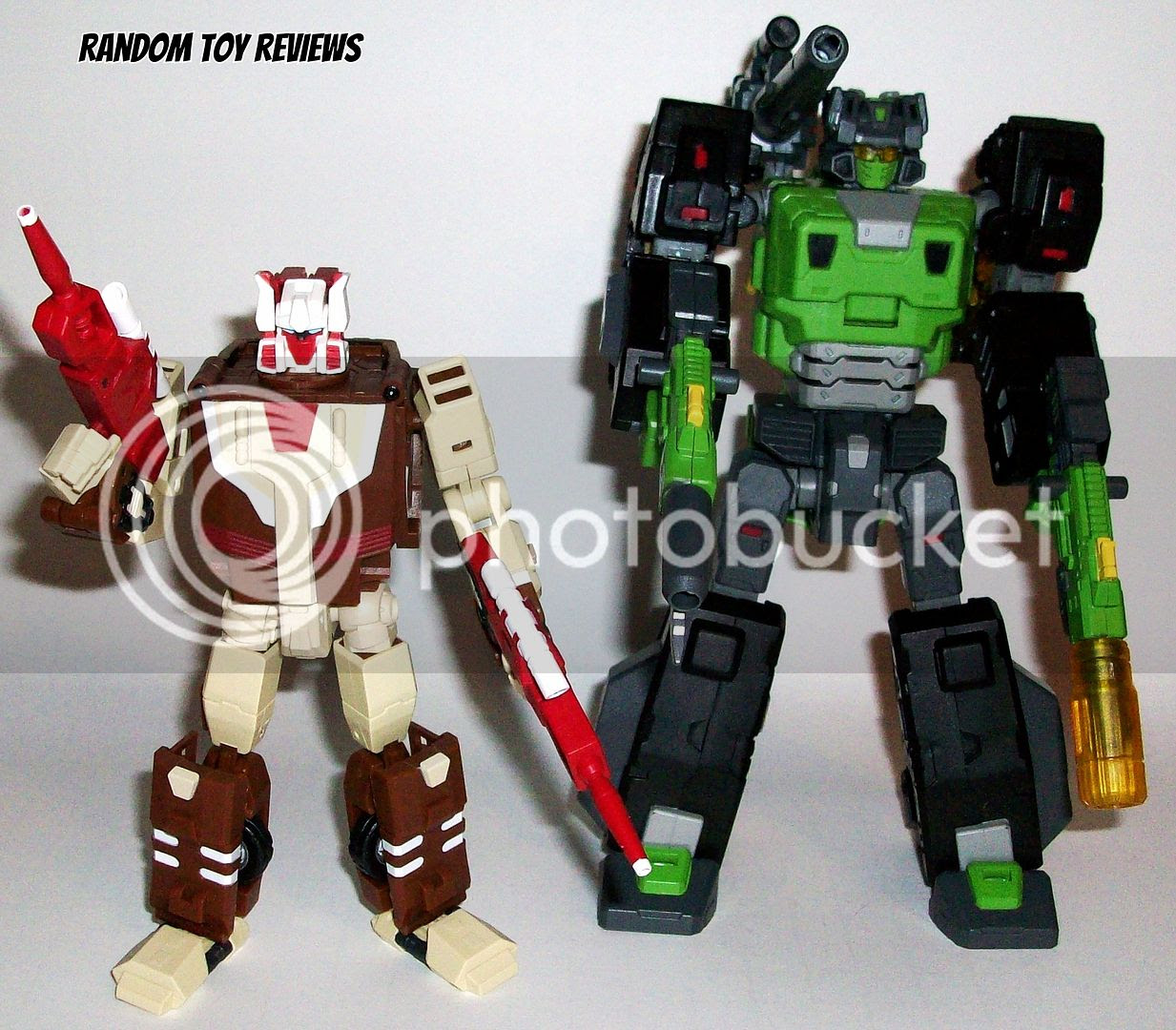 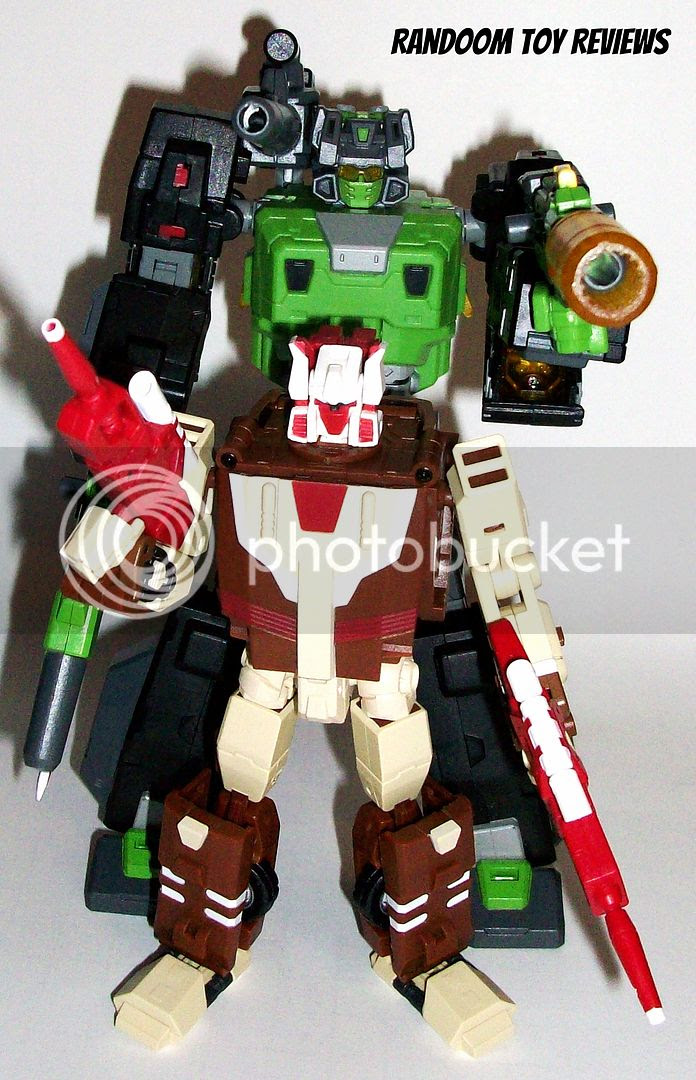 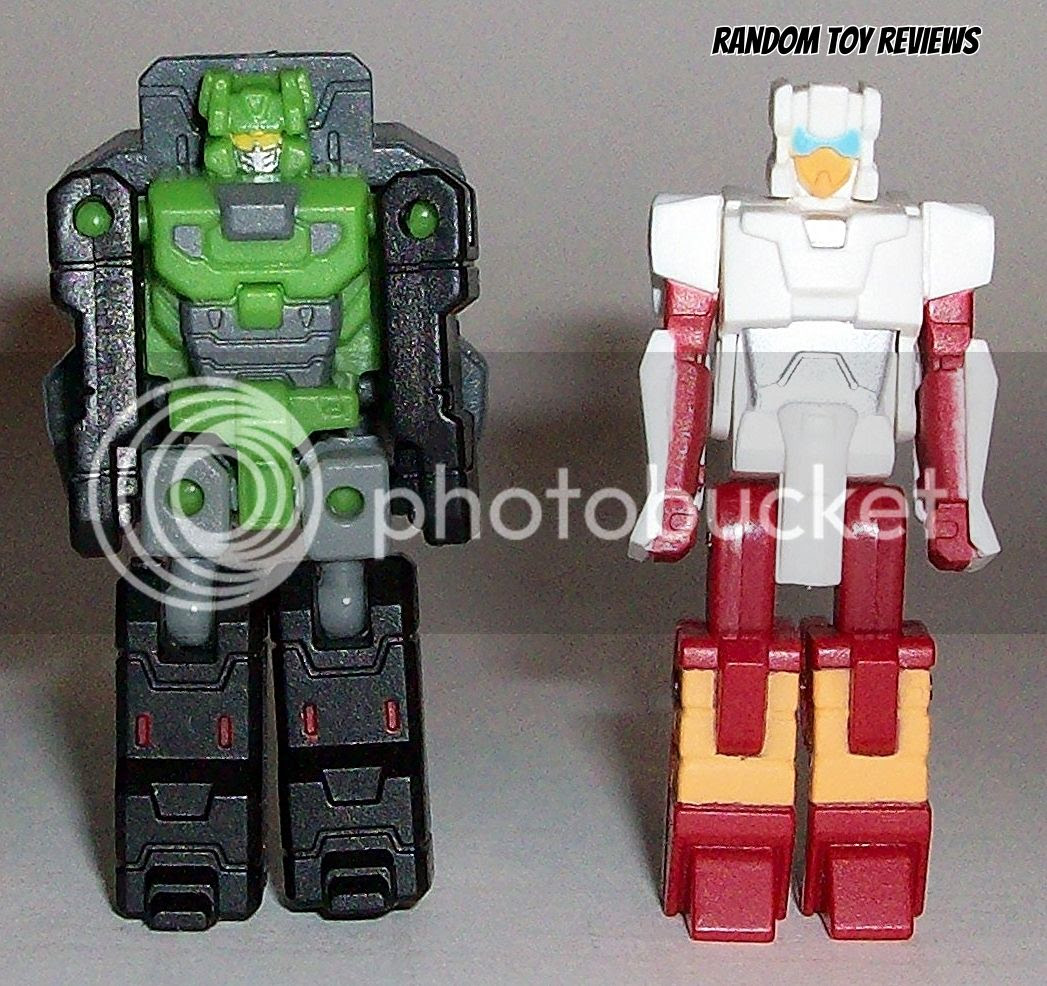 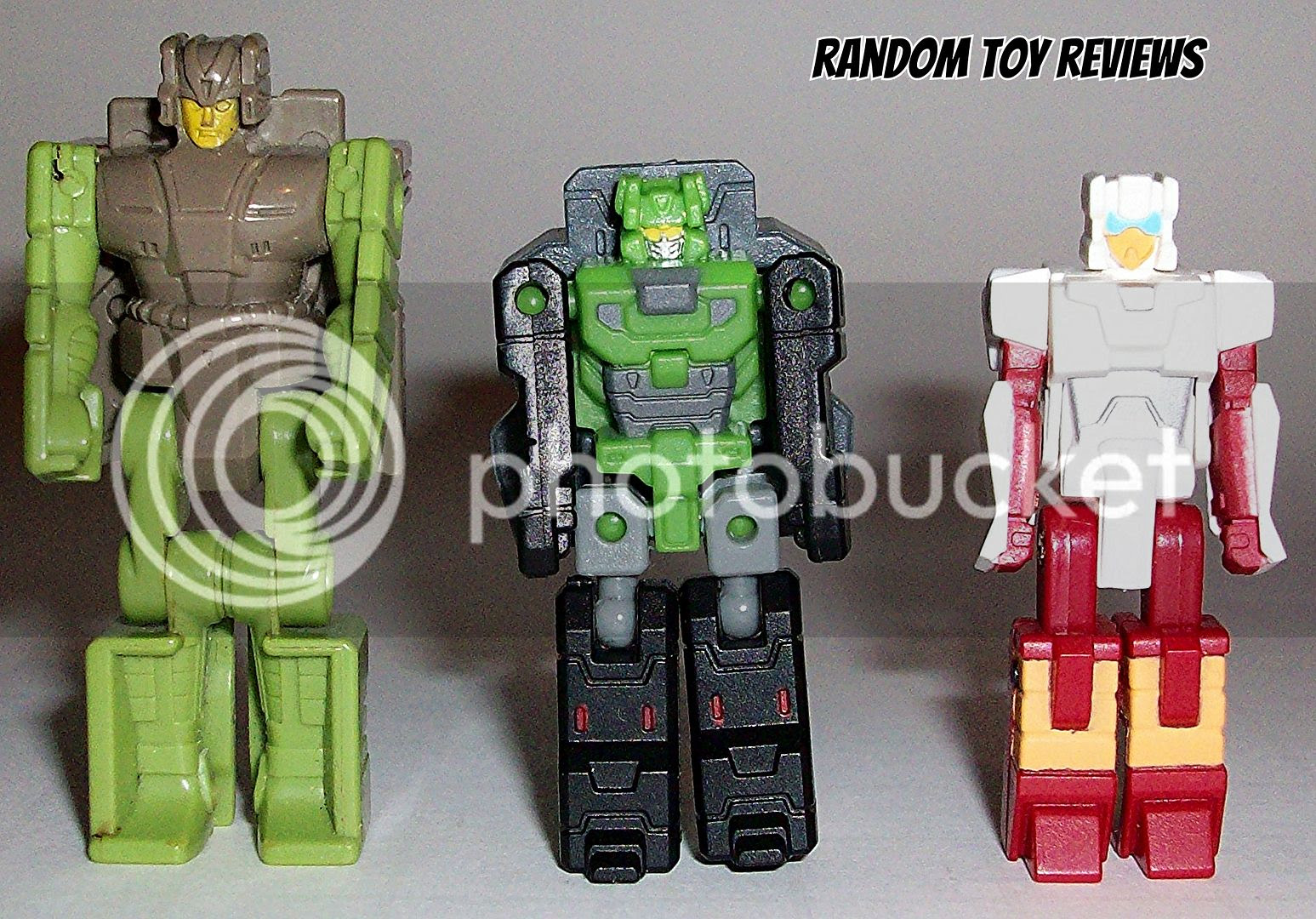 As you can see Hardbone is a good bit bigger than FansProject's Code (not-Chromedome), but it makes sense to me.  The original G1 toys of these characters are roughly the same size, but I personally like the new Hardhead being larger than the new Chromedome.  If Code can be classified as a 'deluxe' size toy, then Hardbone could be classified as a 'voyager' size toy.

Toy World has done an excellent job with this release.  He's large, pretty solid and feels as expensive as he costs.  The plastic quality used seems to be better than on their first release (Hegemon) which is very welcomed.  Hardbone isn't without his flaws, but they seem minor at best.  If you are on the fence regarding this figure I can tell you don't hesitate.  He's worth every penny.  He can currently be found at retailers like Robotkingdom, BBTS and TFSource. 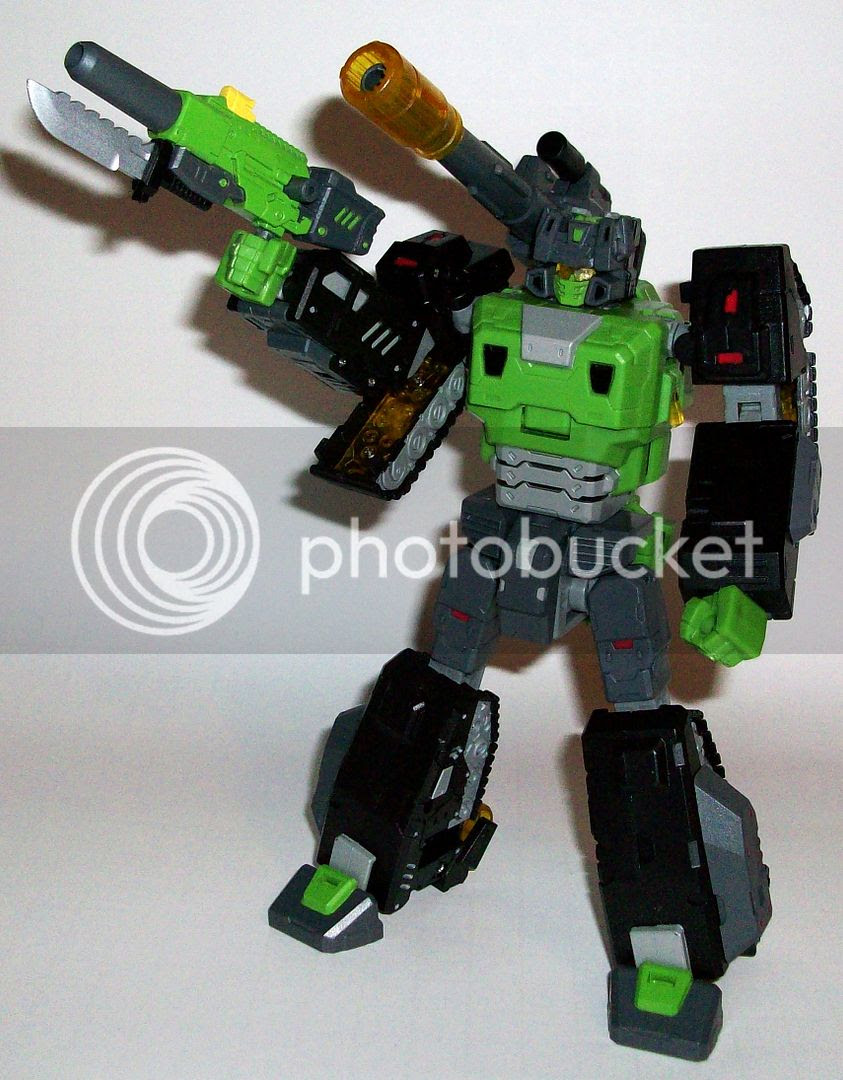 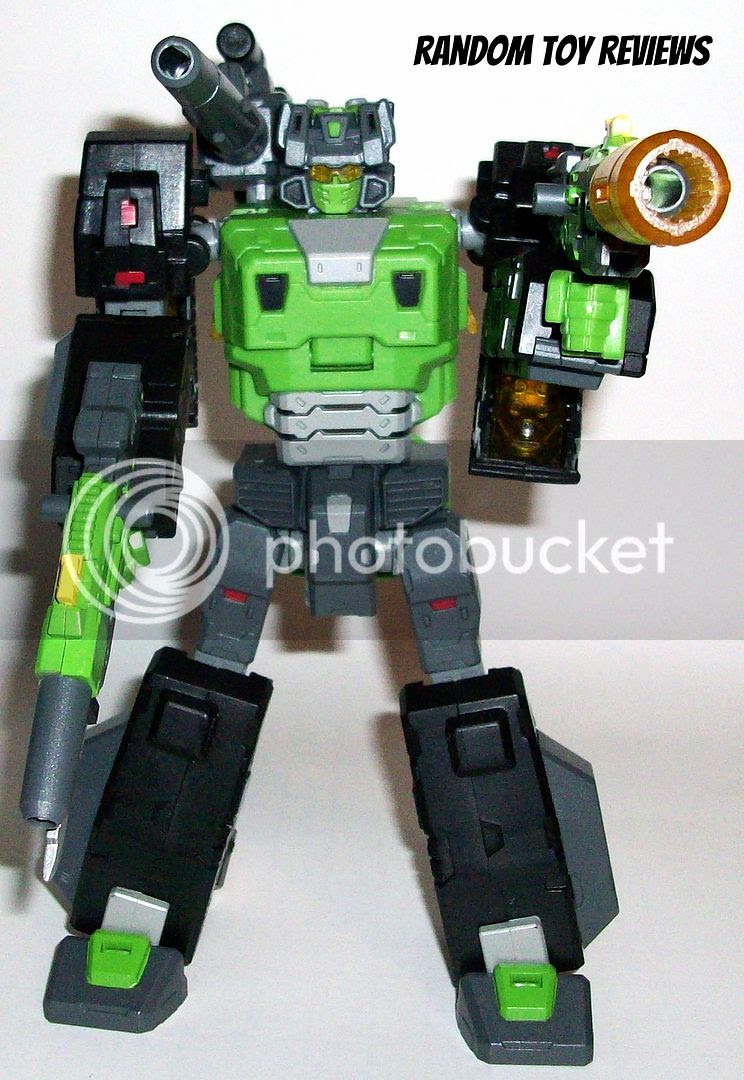