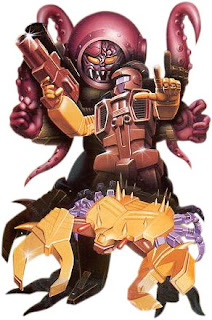 Line: Transformers - Generation One (Hasbro)
Subgroup: Pretenders
Function: Salvage
Motto: "Anything that can sink is worth sinking."
Year: 1989
Price: $14.99 (approximately)

Bio:
The terror of the deep. If he's not stealing sunken treasure or ancient artifacts, he amuses himself by smashing holes in submarines and cruise ships. Electrically-charged, razor-tipped harpoon gun momentarily short-circuits on contact. Also armed with vice-like tentacles that stick to any surface. So strong underwater, he can wrestle a whale to a standstill. Inner robot converts to metal-rending, deep-sea radar and acetylene torch gun.

What? Two reviews in the same day? Well I had so much fun reviewing Bludgeon that I decided why stop? Why not review one of his toy assortment cohorts? This time around we will take a look at probably my favorite of the 3 smaller Decepticon Pretenders, Octopunch. 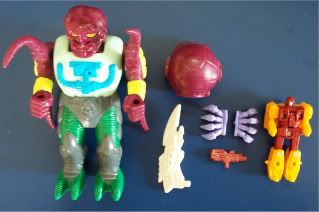 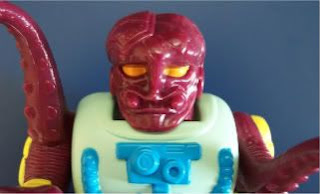 Now I can see why Octopunch wears a diving helmet...that is one ugly mug he's sporting! On the right side of the head is a large metal plate that has been welded together. It's a shame this piece was not painted as it is easy to overlook. I'm not sure what a octopus would look like if it had a humanoid head, but I'm guessing this is pretty close. Just like Bludgeon a lot of care and detail was put into the design of Octopunch's head. 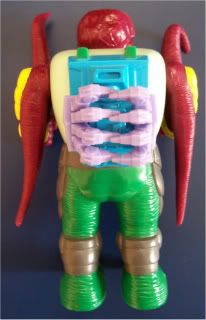 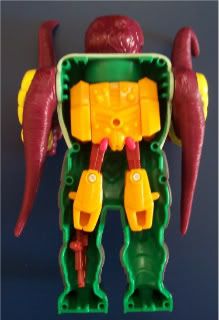 If you flip the back shell portion over you'll see there is a set of small round holes that allow you to clip on the purple crab legs...almost making a back pack if you will. The inner robot fits inside the shell very similar to the larger Pretenders. There is plenty of room in either leg to fit the smaller gun as well. I have to hand it to the designers for making all of the accessories self contained on the toy. The crab legs and gun are rather small and I can see how these pieces are easily lost. The ability to store all the parts on or inside the shell is a very nice feature. 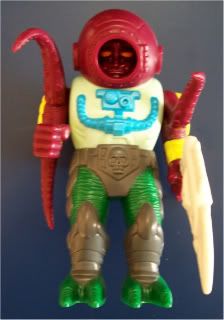 Like just about all of the Pretenders Octopunch has very little articulation. Both arms can rotate a full 360 degrees. It would have been nice if the tentacles on the arms had some sort of articulation, but as they are they are in a fixed position. The plastic is a little softer however so they are slightly bendable. If you are a video gamer as myself you can't help but to think of a Big Daddy from the game BioShock. I love the whole diving suit and the helmet. The large unpainted skull on the belt buckle is a nice feature. I should also mention that Octopunch has a slightly hunched stance. 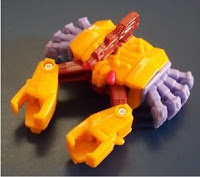 Octopunch's inner robot stands about 2 1/2 inches tall. As part of the beast mode design, the robot arms are in a fixed bent position. The arms still rotate a full 360 degrees though. On the sides of the arms is a small hole that allows the robot to wield the small maroon gun. There are no peg holes in the robot's fists. I find it rather interesting that Octopunch's inner robot shares the same basic color scheme as Bludgeon. Coincidence? Transformation from robot to crab is rather easy. Slide the lever on the chest down to hide the robot head. Fold the arms down by the robot's side. Flip the figure over and attach the crab legs to the peg holes on the side of each arm. Pose the legs/pinchers as you wish. You can open and close the pinchers by pulling on the small tabs on the side.

I love the crab mode. It's small and rather simple, but different and fun to play with. The only paint apps on the figure is the red used for the crabs eyes. There is also a small hole on the top of the crab so it can wield the small maroon gun. 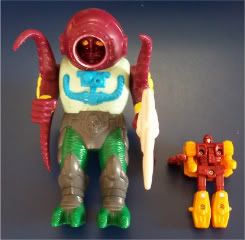 Of all 3 smaller Decepticon Pretenders, Octopunch stands out as my favorite. I can't say that he's my favorite because I never had him in my childhood (I didn't have any of the Pretenders). There is just this unique charm about the toy that sets it apart from other Transformers. This is an easy toy for me to recommend, but like Bludgeon and many of the other smaller 1989 Pretenders he doesn't come cheap. I don't actively track G1 prices, but expect to pay $65.00 plus for a loose complete toy.
at 1:43 PM No comments:

I decided to go old school today and pull out one of my favorite Transformers from the Generation 1 (G1) era, Bludgeon. I also thought it was appropriate that this toy gets a proper review since a new iteration of the character is being released under the current Universe banner this year. So sit back and join me on a journey as we take a look at a toy that truly is "more than meets the eye".

First off, I have to admit that I was not into Transformers when Bludgeon was released in 1989. Somewhere around 1986 or 1987 I decided I was "too cool" to play with toys. I left most of what I had at my grandmothers to basically rot until the Generation 2 & Beast Wars lines got me interested in the Transformers brand again. When I got back into collecting Transformers again I put an early focus on collecting the Pretenders sub-line. I always liked the concept and at the time not many fans/collectors seemed to care about them so they were relatively easy and inexpensive purchases. Enough of my stroll down memory lane, let's take a look at this Master of Metallikato. 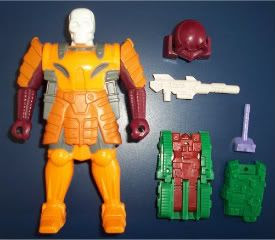 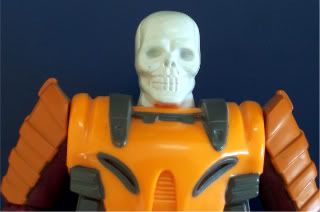 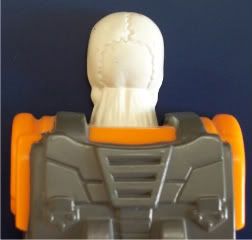 We'll start by taking a look at the outer Pretender shell. Before we jump to the accessories and such I wanted to take a second to look at the awesome head sculpt. For a toy released 10 years ago the level of design given to the head is quite impressive. I feel that Hasbro and Takara did an excellent job giving this a very human looking skull. The eye sockets are just sunken in enough to capture that eerie feel. On the sides, top and back you can see the lines in the skull that divide it up into separate plates. On my particular figure you can see small paint blemishes that have rubbed off onto the skull. The paint application to the armor was also a tad messy as you can see just below the chin. 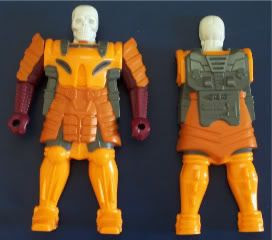 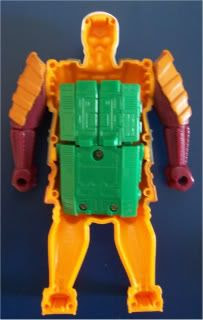 The outer Pretender shell obviously splits into to reveal the inner robot. The top photo gives you a good look at the samurai type armor that adorns the shell. Bludgeon is a master of Metallikato which is a form of Cybertronian martial arts. I wanted to include the picture on the bottom because I've heard a lot of people have had trouble getting the inner robot to fit properly in the shell. The inner robot has to be folded up into tank mode and placed face down point down in order for both outer shell halves to snap together. There is a little room in either leg to place the small purple gun, but more times than not it hinders the halves from snapping together. 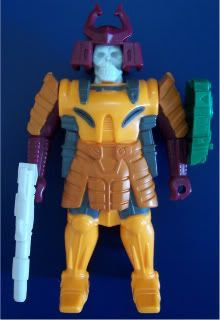 Finally we have Bludgeon all geared up for battle. If you are familiar with the character from the Marvel comics run you would expect the toy to come with a large samurai sword. Sadly his only weapon is a large white rifle. You can use the inner robot's tank turret as a shield. On the side of the arms is a small round peg that allows you to place the shield on either arm. Since this is a Pretender this part of the toy offers very little articulation. The arms do rotate 360 degrees, but that is it. The level of detail however makes up for the lack of movement in my opinion. 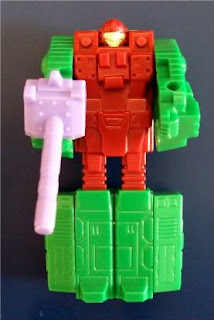 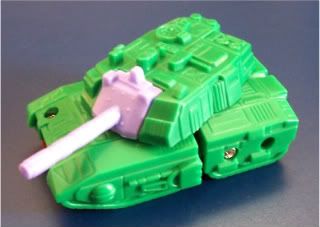 Bludgeon's inner robot is also a fantastic toy in it's own right. Mostly green with maroon on the chest and a splash of yellow for the face. The robot is slightly larger than the standard Transformer Micromaster. Very simple transformation from tank to robot. Simply remove the turret, fold down the rear portion which forms the legs. Pull out and pose the arms as you wish. On the chest is a small flat lever that when slid up reveals the robot's head. The robot can then wield the small purple gun in either hand.

In tank mode there isn't much to say. For whatever reason Hasbro did not include any free rolling wheels on the underside of the tank treads. At least the turret can rotate a full 360 degrees. The purple gun simply snaps onto the turret so unfortunately it can be elevated any more than as you see here. 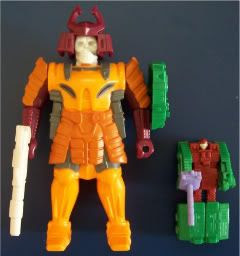 So there you have it, G1 Bludgeon in all his glory. I highly recommend this toy...even if you could care less for Pretenders. If nothing else the toy just oozes the character. I will forewarn any potential buyers that this toy does not come cheap. A quick eBay search will show that this little gem on average commands $75.00 plus. For such a simple Pretender toy that price will be hard for a lot of people to swallow (myself included), but if you can afford him I highly recommend this toy.
at 12:24 PM 2 comments: