Alright, so it's not a toy...but it is actual game play of one of my highly anticipated games this year. That is assuming Nintendo releases it in the US this year! With my current home situation (3 week old daughter) a lot of my hobbies have taken a back seat for awhile, but I will have to find time to work this into my "schedule" @ home once it's made available. So until then this is all I have to fill that Castlevania void.

I did a review of this toy shortly after obtaining it from Japan many many years ago, but I felt like it deserved a 2nd look. I had always intended to do individual reviews of the figures themselves so this review will mainly focus on the volcano play set itself. I'm not sure how widely available it may have been in Japan when it was originally released, but it is rather hard to come across on the secondary market these days. If you are lucky enough to find one in good condition and complete then be prepared to pay $200+. Is it worth the time to track this down or the high price tag? Read on and we'll find out together. 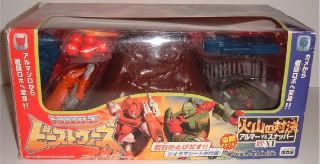 The Volcano Showdown comes packaged in the normal versus arrangement that Takara made popular with the initial release of Beast Wars toys in Japan. Note how the colors fade from left to right, red for Cybertron (Maximal) and purple for Destron (Predacon). This is a large box. It's about xx inches long, xx inches wide and xx inches tall.

I love the CGI art they used for the packaging. Neither of these characters appeared in the U.S. CGI Beast Wars television show so this is especially nice. On the left we have the Cybertron Armor going up against the Destron Snapper. I should mention that neither of these toys were sold individually in Japan unlike many of the other versus sets. Armor was later recolored and released as Bump in the Beast Wars Neo line however. 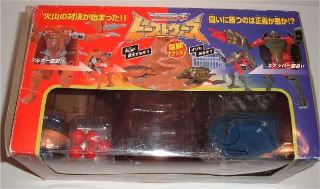 You can see in the top picture here that the volcano comes packaged in a few pieces. I would like to note that mine came with only 5 "volcano rocks" instead of 6. The large blue piece on the right is a cannon that can launch one of the rocks. Packaged underneath the gun are several individual pieces that snap together to form a small jail area. One of the downsides I would say about the packaging is the rather large window that wraps from the front of the box to the top. Mine has several scratches and scuffs all over. Thankfully however there is a thicker clear piece of plastic inside that helps support the bubble from collapsing in and keeps the pieces in place from rattling around inside the box. 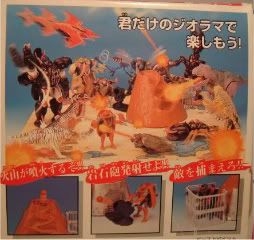 I wanted to blow this section up that appears on the back of the box for a couple of reasons. First off you see a large battle scene in the top portion depicting all of the toys that were currently available at the time of the Volcano Showdown's release. Underneath the battle scene are 3 smaller pictures showing different play features of the set. From left to right is the erupting feature of the volcano, 2nd is the blue gun that can launch a volcano rock and 3rd is the holding pin or jail cell. 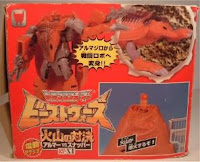 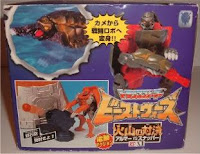 Each end side flap of the box is dedicated to each character, showing a close up of their beast mode as well as an action shot from the playset.

Next we'll look at the "meat" portion of the playset - the volcano. I filmed a short clip of the volcano in action with my wife's older model digital camera and the file extension is something I've never worked with before. So I had a hard time getting the video posted to the blog so I just decided to post a direct link to the video instead. The volcano has a working gimmick and just isn't a ordinary diorama piece. Once you insert one "C" battery in the compartment on the bottom of the volcano and switch it to the on position, you hear a very loud (and annoying) motor inside go to work. You place the volcanic rocks into the bottom channel and it will feed them inside the volcano one by one. It then propels the rocks up the inner shaft and out the top of the volcano to roll back down to the bottom and repeat the process. It took several attempts at times for the rocks to actually obtain the height they needed to escape the volcano's mouth. Other times it would propel the rocks up so high that they would simply land outside of the volcano itself or fall right back into the opening. Most of the time it operated just fine and it seemed to operate best with 2-3 rocks going at the same time.

The volcano has a foot print of about 7 inches and stands 5 inches tall. It is obviously not to scale with most of the Beast Wars toys, but basic sized figures mesh with the set alright. The front of the volcano has the appearance of being solid rock, only a hint of metal existing on the back side. The path for the "volcanic rocks" is obvious as the smooth channels zigzag down from the crest of the volcano. 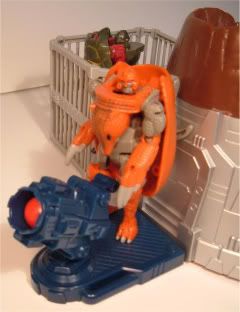 On the right side there are two peg holes for the prison walls. The prison itself isn't very big, only measuring 3.5" x 4". There are two latches to open and close the gate with, but the way the plastic prison walls are constructed they fold in on themselves every time you try to unlatch them. At least you can fit one basic figure in the prison...other than that it isn't very functional. The back side of the volcano has a large metal portion with what appears to be a door in the center. A blue cannon stand snaps onto the base of this metal piece. The cannon itself can hold up to 2 rocks and it appears the cannon was designed to shoot the rocks out, but my specimen doesn't. The trigger on the top rear of the cannon looks as if it would snap down, causing a component inside to launch the rocks. Because the cannon is separate from the base, it can fully rotate on it's own.

There is also a plastic play mat included, but mine had been folded up in the box so long it was very hard to get the mat to lay flat as the plastic is a rather heavy so the creases are deep. It's nothing special, just a worn looking flatland type ground with a little bit of water surrounded by rocks in one corner and some scattered vegetation. This piece in my opinion is really not in scale with the volcano or any other toy.

Ever since I imported my first Beast Wars toy from Japan and saw this set in the included catalog I wanted it. As I mentioned earlier this is not an easy toy to track down. I consider myself lucky as I was able to obtain this in an auction along with the Niagara Falls playset for around $60.00. After toying around with this set however I felt I over paid! I've seen sealed specimens sell on eBay for over $200 which is crazy. Sure it's a neat little toy and it's more than a diorama piece, but it's so small and simple that it just doesn't bring much to the table. I love the figures included in the set and would highly recommend any Beast Wars fan picking those up. However I can't recommend buying the Volcano Showdown VS-X1 set unless you were able to buy it for dirt cheap.
at 3:01 PM 2 comments:

Masters of the Universe Classics: Webstor


Today we'll take a look at last month's Masters of the Universe Classics release from MattyCollector.com. As I'm writing this I'm waiting in my wife's hospital room waiting to become a dad for the very first time! What that means to you, the reader, is this review may be a little sporadic since I guess you could say my mind is a little distracted!

Webstor comes packaged without his body armor or backpack attached...similar to how his vintage figure was packaged. Like most MOTU figures his body is comprised of parts from previously released figures.

I love his head sculpt. The Four Horsemen hit a home run here. The red eyes really pop out on the blue skin and the additional eyes on the forehead are just large enough that they stand out. His large white teeth that protrude from the face gives him a very menacing look. It almost looks as if he's grinning in a devilish way.

Webstor's backpack now features 4 articulated spider legs modeled after the Mike Young Productions / Masters of the Universe 200x series. These attached legs are a ball type joint and allows the legs to be posed a few different configurations. The backpack itself also features a zip line of sorts. One end of the line has a small plastic tab while the other end has a 3 pronged wench or hook. The backpack slides freely along the attached rope. I will mention that the plastic used on the hook is very soft and could easily warp if you tried to hang the hook on anything. I'm sure this was done for various child safety laws. On the back side of the backpack are 4 rectangle pegs that allow it fasten onto the back side of the body armor. I found it a little tricky to get 2 of the 4 pegs to firmly stay in place, but with a little effort they plugged into place and haven't given me any problems.

As I mentioned above the spider legs do have a good bit of articulation allowing you to fold them down behind Webstor. That way if you aren't a fan of the 200x design you can have a more classic looking villain.

I love the spider leg look to Webstor, but I have to say I'm just as impressed with his "classic" look as well.

Webstor also comes with his classic orange blaster that he can wield in either hand. Ever since this figure was revealed I couldn't wait to get my hands on it. I loved he character in the Mike Young Productions cartoon series and this figure does a great job at capturing the animation model...although this figure seems to have more muscle or heft than NECA's staction figure resin statue. Whether you're a fan of the classic design or the more modern 200x do your self a favor and pick this up. As of this post the figure has already sold out on MattyCollector.com, but thanks in part to the subscription service that kicked in in September 2009 the figure lasted much longer on the website. This has also helped keep the price at a respectable level with third party vendors. I've read some reviews were people nit picked about some small blemishes on Webstor's back or with the softness of the plastic, but I honestly don't these things take anything away from the figure. My only quip with this figure is that the rope on the backpack is rather long and can get in the way. Other than that this figure is a must have and fits in well with Skeletor's other evil henchmen.