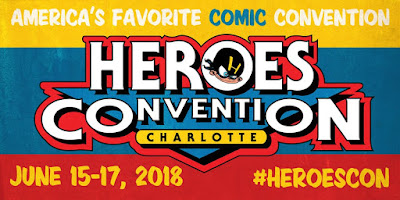 I look forward to Father's Day weekend each year for many reasons. 1) Well, it's Father's day, 2) My birthday usually falls on or near Father's Day and 3) the annual Heroes Convention in my hometown of Charlotte, NC.

For years this has been one weekend where I get to spend some quality time with my older brother and hang out and talk comics. It's time I look forward too each and every year. In the past few years however it seems I've started a new tradition of taking my two daughters with me for one of the 3 days of the convention, usually on Friday. While my wife is sitting Friday out this year due to rolling her ankle on our recent vacation to Maine, my girls none the less are super excited about going.

From birth my wife and I have put books in their crib and now beds. They go to bed each night with books. Now that they are almost 7 and 9 and their reading skills continue to improve, I find each year's trip to HeroesCon w/ them that much more fun. Plus Shelton Drum and his crew do a GREAT job at making the convention family friendly. Usually each year there is a passport kids get at the admission booth where they can go around the floor and collect stamps from different booths and vendors. In exchange for a filled passport, they get free comics. To this day one my youngest daughters favorite was an Uncle Grandpa trade she got for free a few years ago!

We stopped in at Target this evening before seeing The Incredibles II movie and got them each something new to wear to the convention. My oldest, 9 (in October) was more worried about what she would be wearing to the convention than anything else! Love it!

While my girls may not have the same passion for comics that I do, I'm glad they enjoy going to the show with their old man. I'll miss not having my wife in tow this year, but I'm looking for some good quality time spent with my daughters and my brother this weekend...all thanks to comic books.
at 11:33 PM 2 comments:

It's rare that I purchase any 3rd party Transformers toys these days. My reasons for this are varied, but every once in awhile an item is released that catches my eye. This was the case with Zeta's take on the G1 Aerialbots, specifically Fireflight. He was (for some reason) my favorite of the original Aerialbots so I was intrigued by this new "masterpiece" style figure. The price was a lot more affordable than most 3rd party items these days so I took a chance and purchased Fire Fly ZB-01. 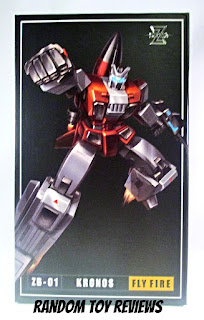 While I'm still not sure if this figure belongs with my Masterpiece collection, the packaging alone does make it look like it should be included. The packaging is nice, but without a lot of frills. The box has as flat black matte look with a thin white border around the front. The name is laid out similar to Takara Tomy's style with the black and yellow rectangles housing the robot's name and in this case, Kronos instead of the character's faction. The artwork for the character is beautiful. I'm not sure who is credited for the work, but they did a great job. They really captured G1 Fireflight's classic look. 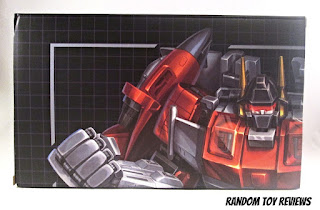 The back of the box shows a portion of the Kronos (Superion) artwork. Apparently each box will have a different piece of art that act as large puzzle pieces if you will. Stack them all together and you'll have a full image of Kronos himself. The last time I saw this used was with Warbotron's version of Bruticus. 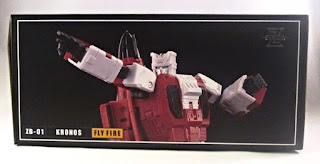 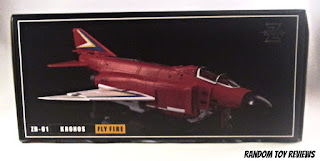 The two sides of the box feature product shots of the actual figure in both robot and jet mode. Again, nothing fancy, but I believe it gets the job done. 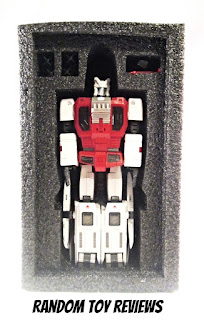 Fly Fire comes wedged into a form fitting block of black foam. I wonder if they hired the guys from Fun Publications to packaging these toys now that they don't have anything to do?! Actually the foam insert is rather nice as it does a good job at protecting the figure. There are three sections that house the figures accessories, two being the jet's missiles and the other being the hand gun. With the lower price point, I kind of expected a plastic insert tray. 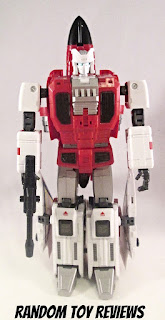 My first impression of the figure upon taking him out of his foam prison was that it felt sturdy. One of the things I always worry about with "unofficial" toys is the quality of plastic used. With my limited experience with 3rd party companies I really didn't know what to expect as I've ran across releases with thin, shoddy plastic and some with high quality plastic. Zeta seems to have used a plastic perhaps one grade down from what you'd find Takara Tomy use in my opinion.

I found the paint applications to be well applied. I didn't see any over spray or any other defects. A few pieces did pop off during transformation, however I'm glad they did that as opposed to the pieces breaking. 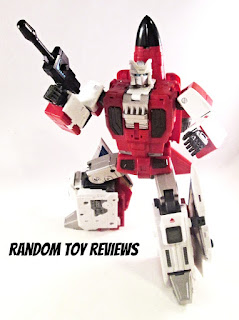 The figure has the articulation that you would come to expect out of a modern masterpiece style figure. Out of the box his joints felt nice and tight, however not so tight that you thought you were going to break something during transformation. I'm not the best when it comes to posing my figures, but I was pleased with all the ways I could bend the limbs and pose the figure. The individually articulated fingers are a little annoying when it comes to getting him to hold his gun, but thankfully the hand has a slit in the palm that matches up to the tab on the gun's handle. This gives the weapon extra stability while being wielded. 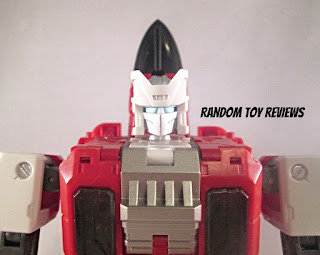 If the designers can't nail the robot's head/face then they shouldn't even bother with the rest of the figure. Thankfully the Zeta guys did a great job capturing Fireflight's likeness. From the forehead crests, to the eyes and mouth plate...fantastic! 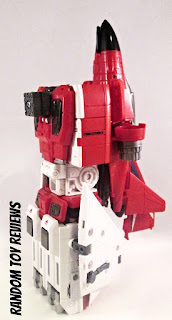 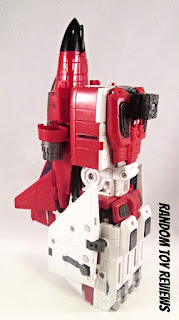 I would assume that their version of Silverbolt will include the necessary combiner parts, however I thought I'd put Fly Fire into arm mode. Transformation was pretty straight forward, however I had a hard time putting the chest back together after rotating the connector port out. In this form he's pretty solid and holds together well. Articulation can be found in the connector port, elbow hinge and at the waist effectively giving it a forearm swivel. 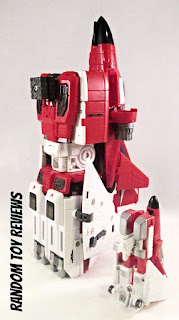 For size comparison, here he is with my G2 Fireflight in arm mode. I didn't want to bother getting into my glass case and de-assembling my G1 Superion. 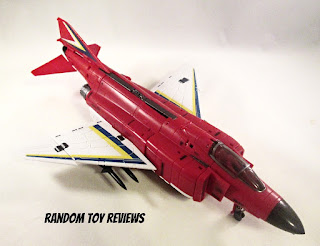 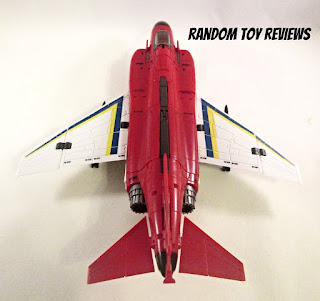 Hands down the best part of this figure is the alt mode. Modeled after a McConnell Douglas F-4 Phantom II, the likeness to the real world jet is quite marvelous. There is quite a bit of detail molded into the plastic all over the jet and the subtle paint applications just add to the beauty. Of course its lacking Autobot symbols on the wings, but overall there is no mistaking this is Fireflight. 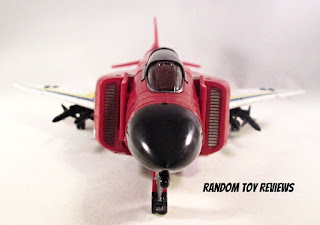 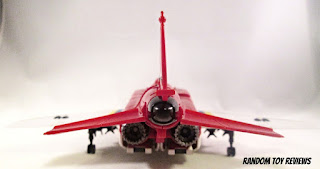 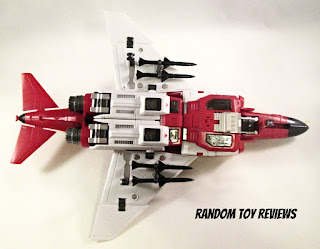 I quite enjoyed taking pictures of the jet. I knew I didn't have room to leave him in this mode so I wanted to have fun with him while I still had him transformed in his alt mode. 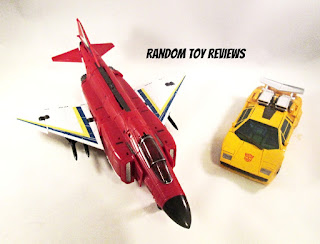 Scaling is always something that is hard to pin down with masterpiece-esque toys, however I like how Fly Fire in his alt mode looks with an official Masterpiece Autobot car. The scaling in robot mode is a little off however. I thought I took a picture of him w/ Masterpiece Optimus Prime, but apparently I either forgot to accidentally deleted the picture. 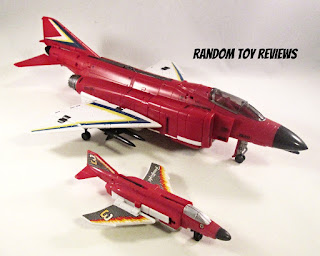 Side by side with his G2 self

Transformation between the two modes isn't far off from the G1 toy. Of course there are extra steps along the way, but the simple included instructions helped me out with a few steps that I couldn't figure out on my own.

Overall I'm really pleased with the figure. From the packaging to the design to the overall quality. Toss in a price that is well below the normal $100 mark that 3rd party combiners usually command and you've got yourself a great figure. I'm a little concerned that the robot mode is too large for an official Masterpiece collection. 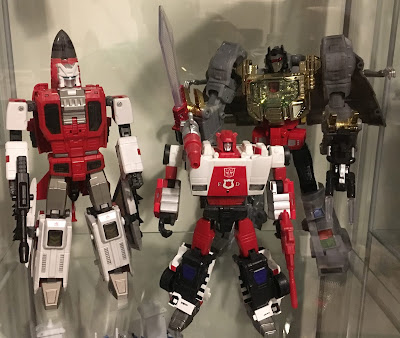 He's bigger than the Autobot cars, but smaller than Optimus. I haven't been able to find a good animation model of the Aerialbots standing aside fellow Autobots, but when I place the him in robot mode along with my other MP figures I think he's a tad too big. Perhaps once assembled in combiner form the whole scaling issues won't be an issue? I'm on the fence whether I'll continue to purchase the remaining figures in the Kronos set, but I don't regret my purchase of Fly Fire as he is a solid interpretation of the G1 Autobot, Fireflight.