I've used this blog over the last 6 or 7 years to share my thoughts and opinions on toys generally from my own collection or from items that interest me. I was recently asked to share my thoughts on a toy that I know very little of so this post features raw information. Usually I know what I'm getting into so this is new territory for me. 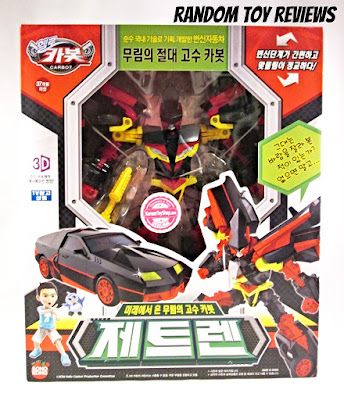 Introducing Zetren (or is it Jetren?) from Sonokong's line of transforming robots, Hello Carbot. From what I've been able to gather from information on line, this line of toys is supplemented by a CGI television show. This may be part of a larger series as well, but I've not been able to confirm that.

When I first saw images of this character, I figured he was one of the villains of the series...being mostly red and black. However I was wrong. In fact I'm not sure Sonokong even produced any toys of the villain characters. I know with Transformers in Japan, the Cybertron (Autobot) toys always outnumbered the Destron (Decepticon) toys due to the good guy characters always sold better. I'm guessing the same logic applies here?

The packaging for this toy is quite nice. The box roughly measures 12 inches tall, 10 inches wide and 4 inches deep. The cardboard is of typical thickness and quality. It features a nice large window for you to view part of the actual toy inside. 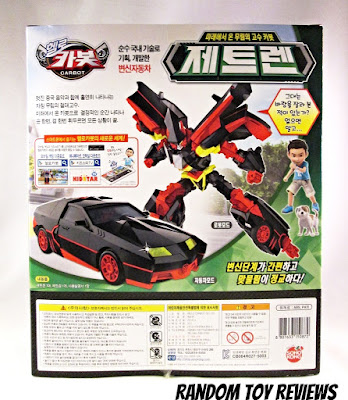 On the back of the box are some additional images of the toy, both in robot and vehicle forms. There also appears to be some sort of ad for a related app, however I assume this is exclusive for the Korean market. A good chunk of the bottom of the box features your standard safety warnings. 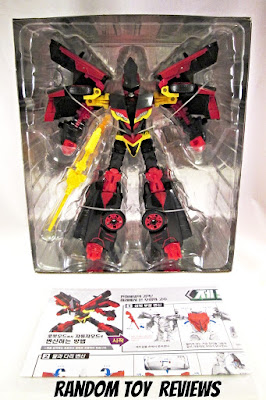 Packaged inside the box is a tray that houses the toy. The inner tray is lined with a reflective silver foil. This looks quote nice in person. The toy is held in place to the form fitting translucent bubble insert with traditional plastic ties.

The instruction sheet unfolds into 4 panels. Each transformation step highlights the moving parts in red to help ease the process. I used these instructions the first time I transformed Zetren from robot to his vehicle form, but after that I no longer needed the instructions as the transformation process very easy to figure out and perform. 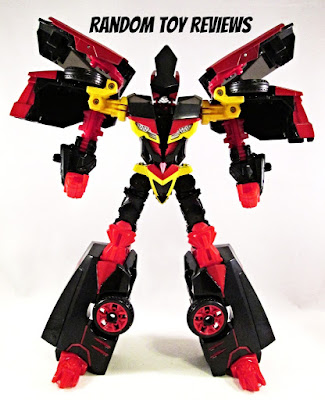 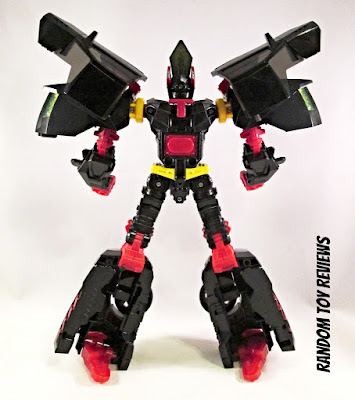 The first thing I noticed when I removed Zetren from his plastic tray was his heft. This toy isn't made of thin, cheap plastic. I guess I shouldn't be surprised as I know Takara has partnered with Sonokong in the past to distribute and market it's various Transformers lines. There aren't any stickers and for the most part all of the colors you see are molded plastic.

Now I do have to add that he is ever so slightly mistransformed in the above images. This is how the robot looks straight out of the packaging. The car panels on his shoulders actually peg down onto the center hole of the front tires, giving him a bit of a cleaner look. On the back of his legs the top portion of the rear car collapses a bit to fill in his hollow calves. I didn't notice this until after I had completed taking my photos and I never went back to correct my images. 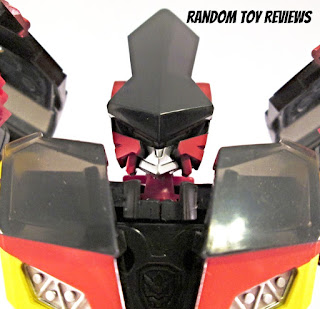 Zetren has a very nice, yet odd robot head. His large black crest if you will is very noticeable, but doesn't look that bad in person. It does however do a good job at hiding his eyes. It's hard to tell in above picture, but his eyes are made of translucent yellow plastic. He does have light piping that works quite well when a light source is directed onto the back of his head. In addition to his head crest, he has nice red wings on each side. I apologize for not doing a better job capturing this in my photos. The last step of his transformation from vehicle to robot involves pushing a red button on the back that splits open the windshield, revealing the head which also pops up into place. 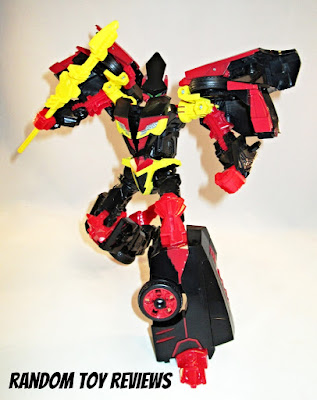 I know there maybe several people reading this that are wondering about the articulation of the robot. Surprisingly there are several points of articulation. His head can rotate a full 360 degrees, but it's unable to look up or down. His shoulders can rotate 360 degrees on ratcheting joints. The arms can swivel out side to side in a hinge joint. He has ratcheting elbows that are quite loud when positioned. His fists are molded into the forearm so they do not move. He doesn't have waist articulation either, but features tight, ratcheting hip joints. They allow the legs to go out and effective let him do a split. He has a light thigh swivel joint that lets you rotate the legs about 180 degrees. He has ratcheting knee joints that offer a fairly good range of motion. His feet don't offer any movement, nor do his ankles, but they are molded in a way to allow you some good poses.

Zetren comes packaged with one weapon, a yellow spear type weapon. At first I thought it was some sort of rifle, then I noticed there weren't any pegs on the weapon to slide into the fist. The bladed tip of the weapon appears to have molded teeth, giving the appearance it was modeled after the lower jaw of an animal, perhaps a T-Rex? I believe the weapon would have benefited from being larger, or at least having a longer pole. However I have a feeling it was made this size so it could be stored underneath the vehicle. More on that in a bit. 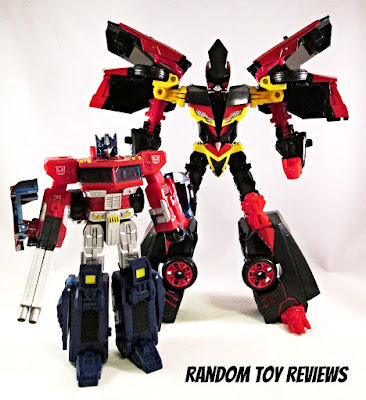 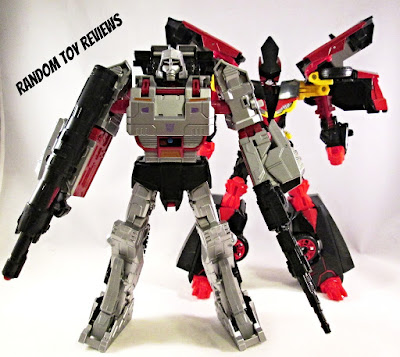 I'm happy with the overall size of the toy, in fact I'd say he's near the same size as the current Leader Class size of Transformers. You can see above he's a good deal bigger than the Voyager size Classics Optimus Prime and on par w/ Combiner Wars Megatron.

His vehicle form is really nice in my opinion. I noticed that many of the cars from this series are modeled after real world vehicles, many of them being Hyundais. I'm not sure of Zetren falls into this category or if his vehicle design is completely original. 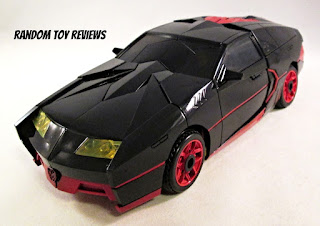 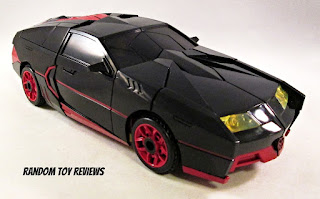 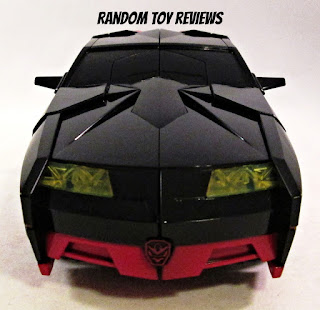 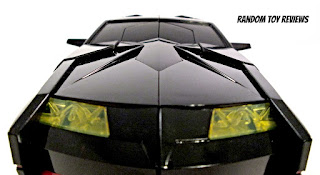 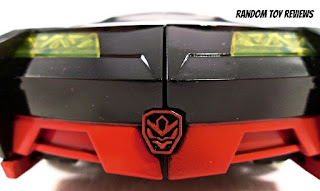 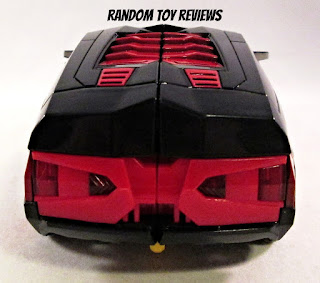 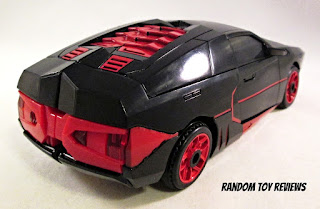 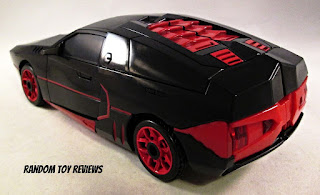 Is anyone else here getting an A-Team vibe?! I love his vehicle form. The shiny black plastic with the red highlights really make this car look nice. His windows are translucent, but are very dark and resembles that tinted window look. Both my wife and I thought the hood portion didn't snap together well, but upon closer inspection it appears that he has vents on each side of the hood. With all of the sharp lines this is kind of hidden. Both the front and rear lights are translucent plastic. On the front is a symbol of some sorts molded into the bumper. I assume this is some sort of faction symbol? His tires are molded plastic, but roll very well on a hard, smooth surface.

I'll also point out that this guy will show finger prints so if you are planning on picking him to display in car mode, make sure you wear gloves or are prepared to wipe him down afterwards.

Zetren's aforementioned weapon fits snugly underneath the vehicle and it doesn't effect the profile. The car will still roll freely with the weapon attached. Kudos to the designer for doing so. I love it when weapons can be cleanly integrated into the alt mode as such. 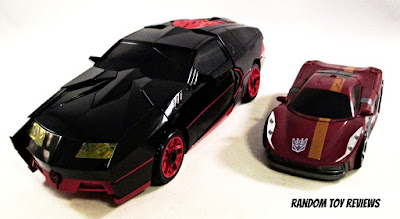 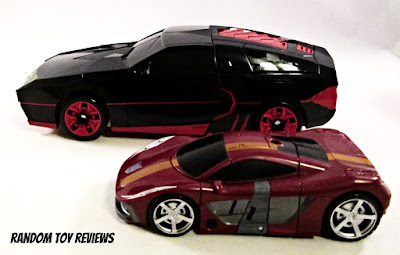 I really wish I had a Transformers Alternators vehicle to compare it's size, but I have very few of them and what little I still have left are displayed on my very top shelf in the back corner. However I did grab a few toys I had at hand for some comparison shots. 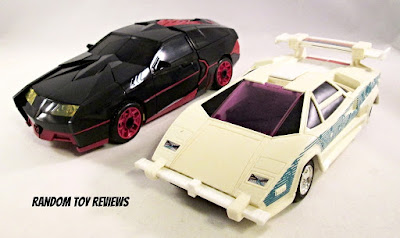 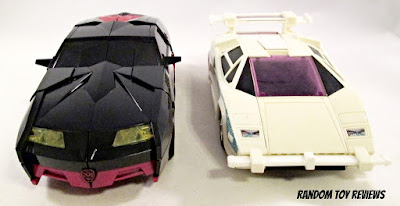 Zetren is a good bit larger (and heftier) than a modern deluxe class Transformer. I happened to have a M.A.S.K. vehicle near by and grabbed it to compare. Surprisingly these two vehicles are very similar in length and width. Hopefully that helps give you a better idea of Zetren's vehicle size. 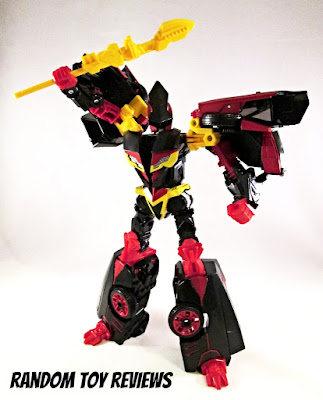 In closing my complete, unbiased opinion of this toy is positive...very positive. I'm impressed by the overall quality and engineering of the toy. Ratcheting joints with above average articulation, molded detail in both modes, a sexy deco and intuitive, yet fun transformation all help create a great toy. Whether you're buying this to play with or just stick up on your shelf for display, Sonokong has a made a very nice toy. It has me intrigued about other toys in the series. I noticed there are several different scales with some of the characters and some have animal forms over robots. You can find Korean sellers on eBay that offer up these items, but beware that many of them are marked up high in most cases. This toy as of this post currently retails for the equivalent of $60 USD. If you are intrigued enough that you want to pick up Zetren or something else from this series, check out my new friends at KoreanToyShop.com for all of your Korean toy needs.
at 7:12 PM No comments: