The problem that seems to be plaguing the new Robots in Disguise toy line is the lack of Warrior class (deluxe) Decepticons. Steeljaw was offered in the very first wave and after that it took a few waves before another Decepticon showed up. Why I'm not sure as there have been plenty of characters from choose from. I've enjoyed the television show and with each debut of a new Decepticon character I've secretly hoped Hasbro would give us a new toy. While I prefer the Warrior class, I'll take a Legion class figure...just give us something new Hasbro!! 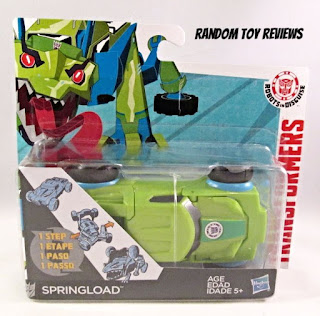 When the frog character Springload was introduced in the animated television series, he was on a quest to find the lost city of Dorado. He was a very quirky character, but there was something about him that I really liked. Perhaps that it's because his alternate mode is that of a large bullfrog? Whatever the reason I knew I wanted to buy any toy that was made...even the One Step that was eventually announced. 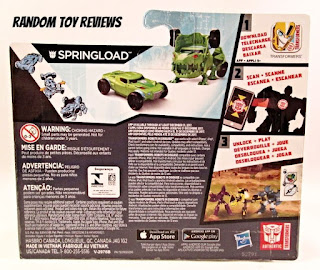 Up until now I had previously purchased only one other One Step toy, Thunderhoof. These are simplified toys with minimal paint apps meant for the smaller fans, however they still have something to offer the older guys like myself. Packaging is the same style used for this series with the backs offering very little information. No bio, no cross sells. There is a very small transformation sequence shown, no set of paper instructions are included. 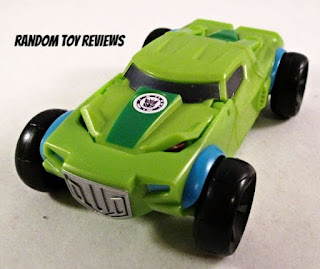 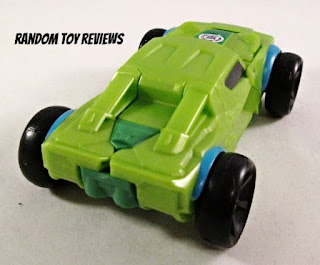 Springload underwent a change when he jumped from the television screen into toy form. In the animated series he transformed into a pickup truck as seen below. His One Step toy sports more of a muscle car type and in my opinion that is more fitting of Springload than that of a truck.

The car is decent looking and reminds me of a Dodge Charger a bit. It's molded in a lime green plastic with dark metallic gray paint on the windows. The vehicle carries over the blue trim on the finders. The dark green on the hood has a metallic look similar to the windows. The thing about the vehicle that bothers me the most is you can see his red eyes peeking out on the hood of the car. The wheels also stick out and immediately reminded me of Cybertron Dirt Boss.

The car rolls freely across a hard, smooth surface. Underneath the car you can see the frog legs, but if you didn't know he transformed into a frog you may not be able to figure out these are legs. 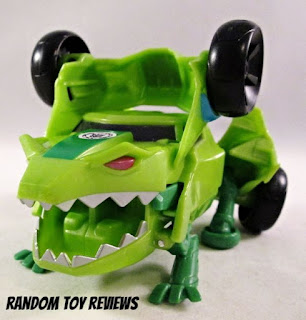 To transform Springload from vehicle to frog, simply split the legs and the toy unfolds with the top of the car flipping over onto the top. The legs are very small and basically just fold in and out. In frong mode the legs don't lock into place so if you're not careful the legs will try to fold back underneath the car.

There really isn't any points of articulation here so Springload just kinda sits there. His mouth can't even open or close as it's spring loaded for the transformation. 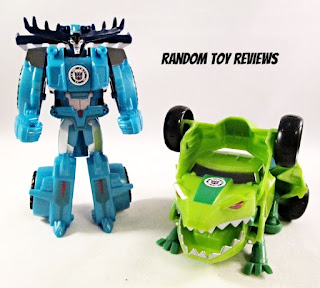 At this point in the game I'm not holding my breath for Hasbro to give me another other version of this character so I jumped on the One Step toy. It's not great, but it's not horrible either. If I'm being honest with myself I can see myself giving these One Step toys to my daughters to play with versus displaying them with the rest of my RID toys.

There aren't many frog Transformers toys so at least Springload has that going for him. Unless you are a die hard RID collector or just want to buy a new Decepticon, you may be better off skipping this release and holding onto your $10 for something else. 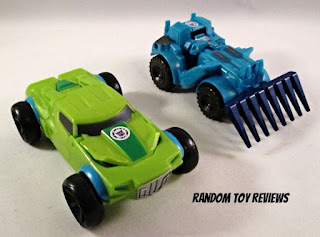 The new year always brings new LEGO sets to retail shelves and occasionally a new theme as well. For 2016 LEGO is launching a new series called Nexo Knights. Going into the new year I really hadn't heard of this new theme or knew what it was all about. However right around Christmas I received the winter catalog in the mail and I was able to check out some of these new Nexo Knights sets.

My first impression of this theme was Visionaries (the old 80's Hasbro property) meets Dungeons & Dragons (or LEGO Castle). From what I gathered from the catalog you have Merlok and the Knights of the Round, using modernized armor for the knights. I was intrigued enough to stop by the local LEGO store on New Year's Day while out celebrating my wife and I's anniversary together. I ended up grabbing a $20 set (which I plan to share very soon), but upon checkout this preview pack was placed in my shopping bag. I saw the promo in the catalog beforehand and perhaps that along was enough to warrant checking out a set.

The preview pack comes in your standard poly bag packaging. Other than a minifigure, I really wasn't sure what I'd find in the bag and I anxiously waiting to get home before opening the bag. Upon finally opening it up I found several goodies inside, but for me (and I'm sure many others) the real draw here is the included figure.

The figure doesn't have a name (that I could find) as it's just a general henchman type. The head is double sided with a different expression on the back. I accidentally deleted the other photo I had showing this. The only accessory he comes with is this black helmet. The figure itself as you can see has some great looking detail on both the chest and legs. I love both facial expressions and wouldn't mind having a few more of these figures to round out Jestor's evil troops.

The other included piece is a shield on a key chain. I'm still learning about the Nexo Powers the Knights wield, but this shield comes without the face plate (that shows the Nexo Power). It's got a square brick glued onto the back of the shield where the key chain is attached, so it can't really be wielded by a minifigure. Not sure what the real purpose of this piece is to be honest.

Two sheets of stickers, one for the heroic Nexo Knights and one for the evil Jestor and his monsters. I doubt I'll find a use for these so they'll probably end up in the hands of my daughter(s).

The last item inside the Preview Pack is a nice two sided poster. I prefer the 2nd image, the vertical poster layout. I often don't get too swayed by themes outside of the classic City/Town theme, but this is one for some reason that has really got me intrigued. I've watched the first few episodes of the series that debuted this week on Cartoon Network and have enjoyed it. Late last night I downloaded the free Nexo Knights app for my tablet to look into this game that is so heavily advertised on the packaging. So far I'm liking what I see and I think it's safe to say that I'll be back with additional reviews in this series.
at 12:20 PM 2 comments:

Many visitors of this blog may be familiar w/ Select's line of transforming toys released in the 80's, Convertors. What you may not be familiar with is the Japanese company behind many of Select's releases, Mark. I don't know much about the company known as Mark, however I do know that they had several molds that didn't make it to North America under the Convertors banner.

Mark had their own series of transforming toys in Japan called Action Robo. Every now and then I'll see one or two appear on eBay, but finding them in their original packaging with the toys intact hasn't been easy. Luckily enough for me I've got a few of these in my personal collection and I found it high time that I share one of them.

Gensen Robo is one of the molds that ever saw a release outside of Japan. If this transforming submarine looks familiar you may be thinking of the Machine Robo / Gobots release, Dive Dive.

I find the packaging to be quite pleasing. These are basically the same size as Machine Robo boxes, however these have a top flap with a hole to be displayed at retail. The plastic window is made of a very thin plastic and with age has become brittle. Use care when handling a boxed specimen. The back of the box has the transformation instructions. Yes, this guy transforms in just 3 steps.

The toy itself is housed in a form fitting styrofoam tray. I was surprised when this arrived in the mail that not only was the box in decent condition, but the inner tray was bright white and fully intact.

My first reaction to Gensen Robo is how cheap he feels. Select never used the best plastic with their toys. It's not knock off quality plastic, but it's definitely not Hasbro or Bandai type quality. Thankfully the limbs are fairly tight as I half expected them to be floppy and not poseable. The toy's stickers come pre-applied and amazingly after all these years the stickers are still holding on quite well.

The submarine is actually quite nice looking. Other than the compartment on the bottom that was added to house the gear for the propeller, it seems pretty faithful to the submarine it's based off, the USS-Barb. Turn the white knob on the bottom to wind up the chrome propeller. Select used this feature on the boats that were released in the Convertors series.

Often you can find toys such as these mixed in with lots for sale of Gobots as they are constructed very similar and are of similar size. I really wish I owned the Gobot Dive Dive so I could have compared the two, but Crasher will have to do for now.

Overall I really like this toy. It's got a unique design and it looks good in both vehicle and robot modes. I'm still trying to figure out just how many of these toys were released by Mark under the Action Robo banner in Japan. If you are a fan of these type of toys I highly recommend them, however they don't appear for sale very often unless you have a keen eye and can spot one in a generic lot of toys.

If you enjoyed this post please comment and let me know. I have a few more to share if I feel there is enough interest to warrant me digging into my closet to pull them out.