The members of the Kingdom of Death Sea are varied aquatic animals with individual personalities, however Guereu seems to be the first "army builder" of the Beast Saga series. Similar to how the Seacons were used in the Japanese animated Transformers show, multiples of Guereu can be seen in both the animated and manga versions of media. Whether or not this character has his own individual personality I have no idea. 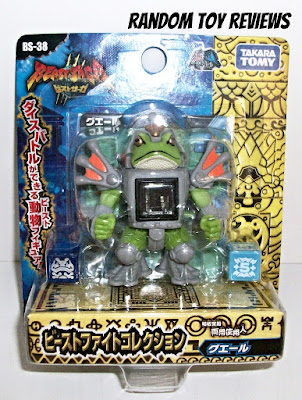 Guereu is a green frog in gray armor with a sword and shield. Maybe it's the head crest on the armor, but I feel as if the armor is modeled after an old Japanese Samurai? The armor has some nice touches, most noticeably the "frog feet" on the front of his shoulders. The paint apps are nicely done with a touch of bronze and orange on the armor. The skin is a light green with gold used for the eyes.

Very nice sculpt, but with all Beast Saga figures the articulation is very limited. Arms have a full 360 degree of rotation. Legs are hindered by the sculpt (mostly the dice launching gimmick) from the same free range movement the arms have. 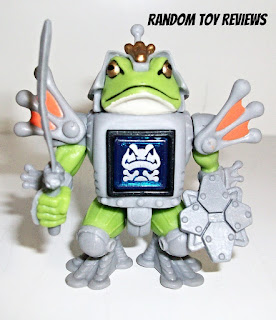 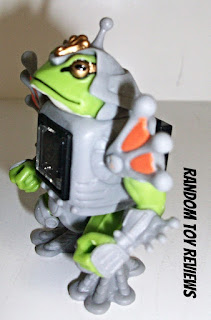 His sword is a simple weapon cast in a very soft plastic. A lot of the Beast Saga weapons came out of the packaging slightly warped. I'm sure I could use a hair dryer on low to soften the plastic enough to try and flatten it out, but I never bothered to try as the slight curve doesn't bother me that much.

Guereu also comes packaged with two dice, one translucent blue dice based on the character and light blue dice used in the game. I still don't know how the dice game plays so I just tuck the extra dice away. 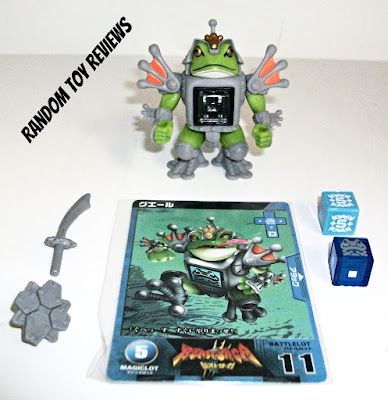 The Kingdom of Death Sea quickly became one of my favorite segments of the Beast Saga series based on some of the designs. Guereu isn't my favorite, but definitely stands out amongst his teammates. Beast Saga is a lot of fun and I wish it would have lasted longer than it did. Sadly if you didn't jump on the series when it was on store shelves in Japan, it'll cost you quite a lot now on the secondary market. These figures only retailed for a few dollars each and now most sellers want $20.00+ each. Ouch! However if you keep looking you can find deals pop up online from time to time so if you're curious about these Battle Beast homage toys, don't give up searching out those deals. **EDIT** I just released that Robot Kingdom still has many of the Beast Saga figures in stock for under $7 each, including Guereu.
at 10:20 PM 4 comments: