Knock off G1 Transformers are nothing new, however sometimes they can be hard to find. I'm guessing with the US' laws and such is why we don't see as many of these toys in the US, however people living in other countries seem to find a wealth of KOs. For this reason alone I love to follow certain people on Instagram because of the crazy toys they post. I've always found KO toys of the Transformers I grew up with to be oddly fascinating. My collection of KO TFs is small as not every one I acquire meets my requirements. Today's specimen is one of those that didn't quite make the cut. 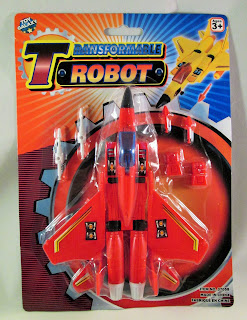 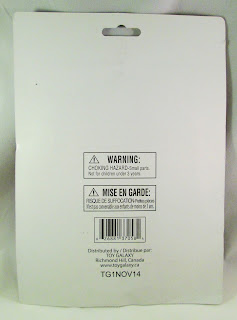 From what appears to be a Canadian toy company, Toy Galaxy, we have their line Transformable Robot. There is no individual name of the toy, but come on...this is the G1 character Sunstorm. I believe I picked this up off of eBay some time ago for right around $10. The blister card was cheap and flimsy and I have expected the blister bubble to be falling off the cardboard backer. I also just assumed it would be G1 size since the toy appeared to be based off the original G1 seeker mold. 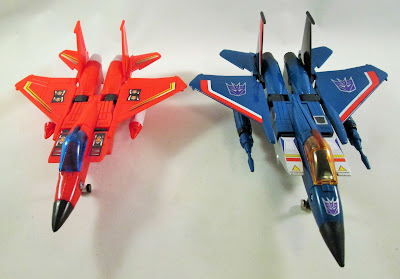 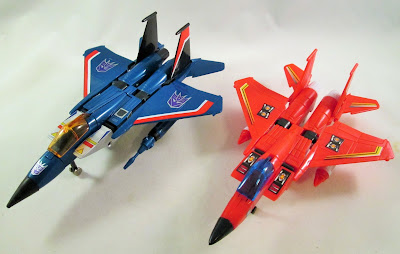 As you can see in the first picture, "Sunstorm" is just a bit smaller than an original G1 seeker. Plastic quality is sub-par as expected. There wasn't a sticker sheet included as all of the stickers were pre-applied. What's odd is the stickers that were applied to the wings should be applied to the legs/thighs of the robot. 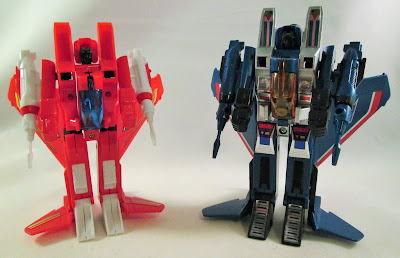 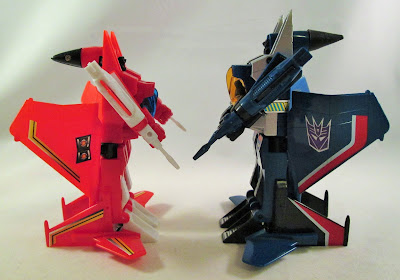 Transformation is the same as the original mold, albeit pieces don't always stay in place as they should. 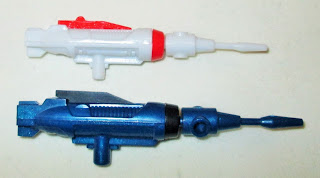 The accessories are near replications of the originals, just smaller. The launchers are not spring loaded, but I wasn't expecting that they would be.

While this was an interesting piece to play around with, I decided that since it was smaller than the original mold that it didn't quite fit into my G1 KO collection so off it went to my eBay store. Not surprisingly, someone else snatched it up pretty quickly. Since then I've seen this one and other colored versions for sale in the range of $10-20. I'm sure there are some collectors that love these and had it been 1:1 with the original mold then I perhaps would've kept it.
at 10:43 AM 5 comments:

April is the beginning of my business' busy season so I apologize for getting this post out so late, but I was excited to share some of this week's books...and a few stragglers. 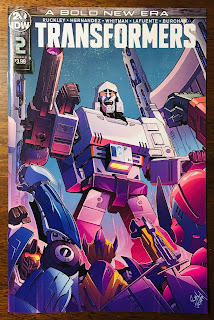 I was pumped back in the day when the now defunct Dreamwave Productions got the rights to produce new Transformers comics. While my relationship w/ the old Marvel series was sparse, these new TF comics came at the right time. I loved the art and while the stories left a lot to be desired at times, I kept buying. Eventually when the license ended up with IDW I gave it a try...but after a year or so I just didn't care for the direction my beloved 'bots were going.

I really haven't followed anything IDW did with Transformers. The only "new" book I red was last year's Free Comic Book Day issue of Unicron...something or other...and I don't even remember what went on in that book. When I heard that the franchise was going to get a reboot I thought now may be the time to give IDW another chance. While I still haven't gotten around to reading the first issue, I picked up the 2nd issue thinking I'd enjoy it. Well I haven't read this one either...but I'll be on the road this upcoming week traveling for work and I always take a comic book board box with me full of my backlog so I will be getting caught up. 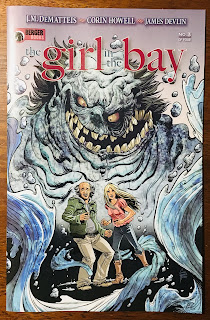 I've been giving non-Marvel titles a look here and there and The Girl in the Bay has been a fun ride. I really enjoyed the first issue and immediately couldn't wait for the 2nd issue to come out to advance the story. If you've haven't heard of the book - it's basically a murder mystery w/ a sci-fi twist. Very fun ride, highly recommended. 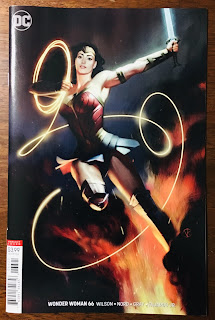 I loved Linda Carter as Wonder Woman when I was a little boy, but that was the extent of my "relationship" with the character. I try not to be one of those type of guys that buys a book for it's cover, but dang it if Jenny Frison didn't put out some awesome art. That alone got me hooked on the current WW title. Even those issue 66 wasn't done by Jenny, it's still a beautiful cover none the less. The story they've been telling isn't half bad either... 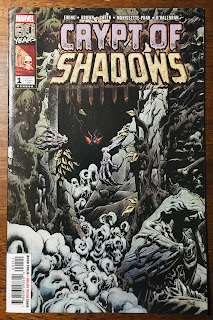 I recently picked up an old Crypt of Shadows book at a local show and loved it. I vaguely remember seeing this new #1 solicited in Previews, but I didn't order it. Well it was sitting on the front of the shelf as I was leaving the store the other day and caught my eye. I've already dropped this book in my box to read this week while I'm on the road...looks great based on the cover. 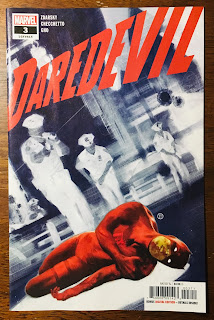 I don't know how I missed the 3rd issue of the current Daredevil series so I was glad there were still a few issues on the shelf. 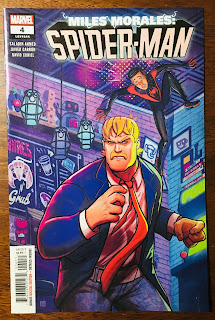 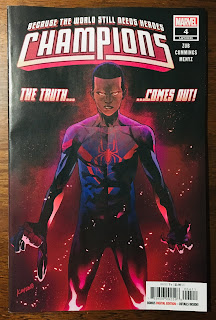 While I really enjoyed Miles' previous series, I haven't been able to get into his current book. I've decided it'll be dropped after this current story line wraps up. Same goes for Champions. I just don't have much of a connection to the characters and from what I've read, this version of Champions may not be around much longer anyhow. 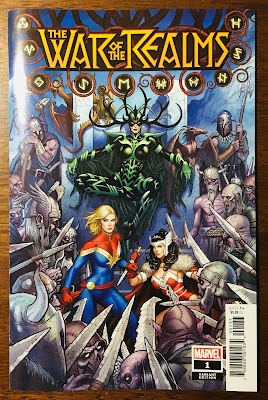 Finally after months and months of teasing, the giant War of the Realms miniseries is finally here. There were a bajillion variant covers and the shop I stopped at the other day just happened to have one of several of the different variants. I don't usually buy the same comic more than once so trying to decide which cover to buy was tough. There were a lot of great art - Oliver Coipel's Lady Sif and Ryan Otley's Spider-Man cover to mention just a few, but I ultimately decided to go with the Frank Cho variant. Simply stunning. Now I just hope this story is a good as Marvel has been hyping it to be. We'll see...
at 8:57 PM 2 comments:

I've been collecting Transformers since their debut in 1984. I've seen a lot of different product come and go over the years, but nothing quite like Transformers Alt-Modes. I'm finding it difficult to describe what these are and why someone thought these were worth the plastic used to make them. 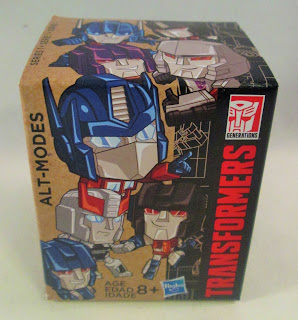 Alt-Modes come packaged in blind box like cardboard boxes and were packaged in a tray for retail stores. The first wave featured 8 different characters, but these aren't blind packaged like you may think. On the back of the box was a small hole that if you were patient enough, you could line the toy inside up with the hole to get an idea of which character was inside. The first time I bought one of these I thought I had Optimus Prime, but ended up with the Decepticon Thundercracker instead. It wasn't foolproof, but at least you had some sort of idea and weren't going in blind. 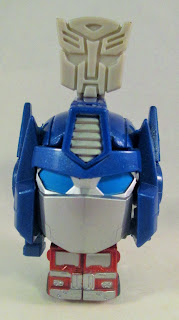 So what are the Alt-Mode toys? Well it's a giant head with either an Autobot or Decepticon emblem on the top. When you fold up the emblem (as shown) and pull it up, a spring loaded transformation of sorts happens and it switches from a chibi vehicle to a small robot body. It's an odd novelty, I'll give you that. They retailed for way too much ($6 or $7?) and they didn't sell well because eventually they would wind up in close out stores like Five Below and Ollie's.

I have two of these in my collection - Optimus Prime and Thundercracker. If I didn't collect those two characters I'm not sure I would've even kept these things. If you like odd toys then these may be right up your ally, but otherwise you may want to stay far, far away from these!
at 5:26 PM 5 comments:

Over the last few years the activity on this blog has taken a back seat to many things, but life in general. As a result I've noticed my readership drop off tremendously and I get it. Only one or two new posts per month doesn't give people the content that can be found on other social media type outlets. While I may never recover to the point where this blog once was, I've decided to re-dedicate myself (as much as I can) to producing more new content for this blog, more frequently.

Much of what I've been working on behind the scenes isn't new necessarily, but it'll be new to the blog. I've still got TONS of pictures that I took of Transformers and other various toys that I just sat on. I've been digging these out, cleaning them up and will start posting some new reviews/articles very soon. I'm not going for quantity over quality, but I do want to pump out more than I've been doing.

Of course there will be some hiccups along the way. Work, life, other hobbies, but this is something that I enjoy doing and I even like looking back on my own stuff I've posted in the past. If you're one of the few readers that have stuck around and still check the blog every once in awhile, thank you. If you're new to the blog, thank you.

Look for new posts of older toys and some new stuff sprinkled in as I look to get this blog kick started once again.