Today we'll look at one of my favorite gaming franchises on a handheld system that many may not be familiar with - Bandai's WonderSwan.  Designed by a former Nintendo developer & Game Boy creator Gunpei Yokoi this little handheld never caught much steam outside of it's native Japan.  Just like the Game Boy, the WonderSwan started off as a simple black & white console before getting a color upgrade model and lastly the Swan Crystal version.  I was able to track down both a B&W model as well as a color system for relatively cheap years ago, but English friendly games are hard to come by no matter what model system you have.  I remember finding out years ago that one of my favorite gaming franchises was ported over to the WonderSwan Color and I had to track it down.  It took me awhile before I was finally able to do so (and afford the game), but I'm happy to share a few thoughts now that I've had a chance to hold the game in my hands and play it. 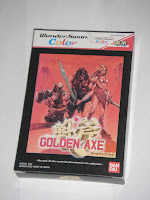 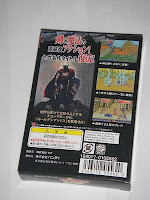 First off let me say how much I love the artwork for the packaging.  I already own the first Golden Axe game in several varieties and I don't think I have seen this art before purchasing this game.  All 3 characters are drawn very well and have that edgy look.  The back of the box features some very iconic artwork of the game's villain Death Adder along with some standard fare screen shots.

So what does this game look like on a tiny handheld system you may wonder?  Take a look at the video below I found on YouTube of the actual gameplay.


I do have to say that the graphics are better than what is shown in the video.  I'd say the graphics are on par with your average Game Boy Advance game.  I was playing the game on my WonderSwan Color handheld and the colors are very vibrant.  What surprised me when playing the game was the sound quality.  The system features one small speaker on the upper right hand corner, but it just belted out the iconic Golden Axe theme music when the titled rolled onto the screen.  The controls are also pretty good on this system.  It's a little odd getting used to using 4 buttons in the layout of a plus when most of us are used to having a solid plus shaped piece of plastic for movement of the characters and such.  The jump and attack buttons are also a tad on the small side, but they were very responsive none the less.

If you love Golden Axe then you should love this port of the game as it stays very faithful to the arcade version.  The game can be hard to track down and a tad pricey at times, but it is a great addition to anyone's handheld library.
at 3:42 PM 1 comment: