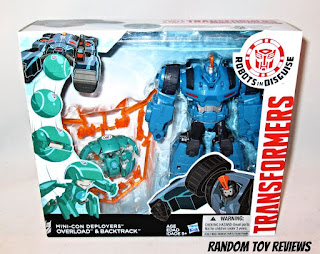 One of Hasbro's biggest issues it seems with the newest iteration of Transformers' Robots in Disguise line of action figures has been distribution. I picked up Overload & Backtrack, part of the second wave of Deployers back in January 2016 from HasbroToyShop. Just in the last 2 weeks have I actually started to see him show up on retail shelves locally in my area.

At the time I ordered Overload, I had no idea who he was as he hadn't made his appearance in the animated television show yet, but I liked the way he looked and then there is the whole Mini-Con thing...again. Some of you may know I used to be a big Mini-Con collector and at one point had a very large and lucrative collection of Mini-Cons and Microns. I sold off 95% of that collection, however these new RID Mini-Cons have their own unique charm that has been growing on me. 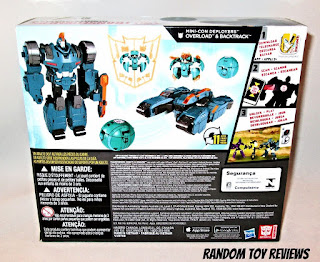 The first Decepticon Deployer released was Fracture. A lot of fans weren't too crazy about the toy for a couple of reasons, however it seemed like the consensus vote was the ugly Mini-Con launching gimmick that hung off the robot mode. Overload has been designed around a new form of Mini-Cons so his vehicle and robot modes are more slimline and pleasing to the eye.

While I like the animal themed Decepticons in RID, it's refreshing to see another "normal" Decepticon join their ranks. The inclusion of a new style Mini-Con is also refreshing, however there is something about Backtrack that reminds me of something else...* Bakugan anyone? * 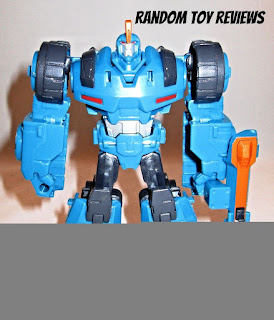 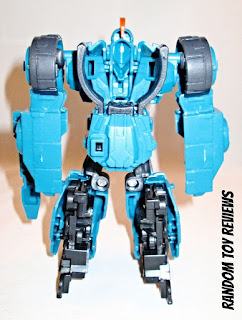 My first impression of Overload himself upon taking him out of the box was how light he felt. He seemed to have a solid overall design, but just didn't weigh much. Most of the vehicle parts are well hidden in robot mode with is a nice touch. Judging from the large wheels on his shoulders, you would think he transforms into some sort of off road vehicle. Kudos to the design team for not making him look so "tank-ish". The orange weapon you see him wielding is actually the launching mechanism when his Mini-Con is plugged into this tank mode. Again, clever way of integrating this play pattern feature into the toy.


(not sure what happened to the photo on the left...when I was editing the photo this is how it came out and I lost my original photo when I had to re-format my camera's memory card) 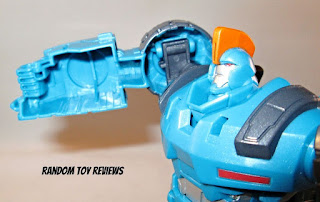 Once I began to play with the figure for a bit I noticed why he felt so light...several parts of him have been hollowed out such as this arms. I know it's just a cost savings move by Hasbro/Takara Tomy and it's nothing really new, however I don't like the effect it has on the figure. It makes them too light and feel cheap in some cases. 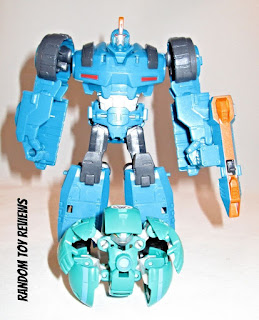 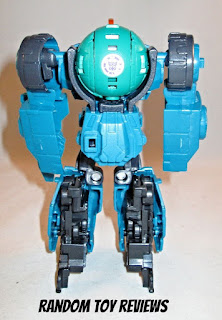 Backtrack pairs up with Overload nicely. I'm surprised however that his color wasn't matched to Overload's. Playing around with these figures I quickly started to get a bit of a G1 Soundwave vibe. In robot mode the Mini-Con can be transformed back into this sphere form and placed in the clip on the back of Overload's back. 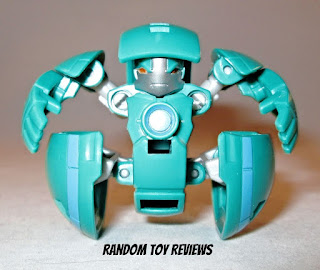 I have to admit that I had fun with Backtrack. I never owned any of the now defunct Bakugan toys, but I can see why he would remind people of that franchise. For me I was reminded of the spherical Transformers released in Japan under the Beast Wars II series. Backtrack features a very simple transformation and when all rolled up he holds the form quite well. 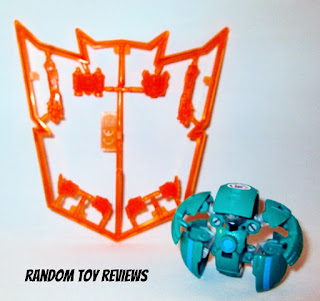 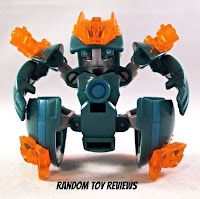 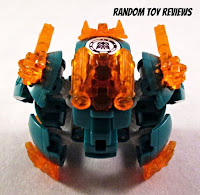 Like the individually packaged RID Mini-Cons, Backtrack comes with a translucent orange Deception symbol shaped "tree" holding on the various detachable weapons and armor bits. You get a piece that fits on the head, two shoulder mounted guns, what appears to be a jet pack of sorts backpack and two pieces that look like feet.

If I'm being completely honest - I really don't like these Energon bits. Maybe it's the translucent plastic that is used. I don't know, but these pieces really don't do much for me. Speaking of the parts, you can leave them attached when you transform the Mini-Con back into spherical form. 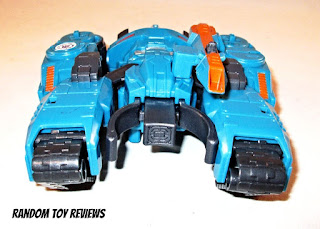 As I mentioned earlier, the designers did a good job at hiding the fact that Overload's alternate form was that of a tank. He transforms rather easily from robot to tank and I love how the tank treads are hidden in the back of the legs. Sadly though the tank treads are solid plastic and not rubber. At first glance of this form I was immediately reminded of Armada Megatron and his H style tank form. The little clip in the front also mimmicks the horns of Megatron as well. This clip in the center is what holds and launches the Mini-Con spheres like Backtrack. 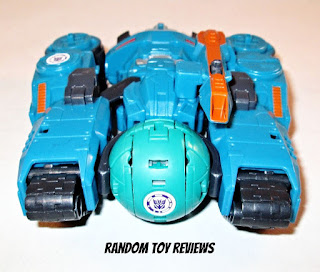 Loaded up, Overload may look a little odd however I like the overall look better Deployer Fracture. There is a small black button on top of the orange gun that when pressed, launches the Mini-Con forward.

Overload is a fun toy to play with. My youngest daughter has taken a real interest in the television show and the toys already enjoys launching Backtrack and watching him roll across the floor. Speaking of Backtrack, he has already been repainted and included in a 4 pack of Mini-Cons, current at retail. He seems more like a real Transformer and less of a gimmick toy. I couldn't say that about the Deployer versions of both Drift and Fracture. If you enjoy the show and you like the new style Mini-Cons, I encourage you to pick up this set. 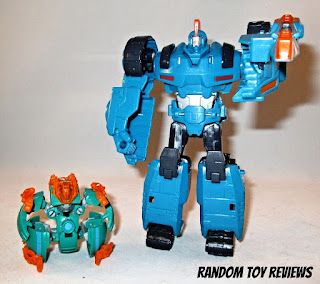 I would like to apologize for the less than stellar photography in this post. Sometimes my current set up works great and then there are times my pictures come out with a quality lower that what I'd like to use. However with my current backlog I just didn't have the time to start over and re-take all the photos. Hopefully my next post with feature better photos.
at 11:36 PM No comments:

I always gravitated to the bad guys of any toy series I was interested to. May have been the Mutants from Thundercats, the Decepticons from Transformers or in this case, Cobra from GI Joe. While I look back on some of the Cobra characters and their action figures from the original A Real American Hero series and laugh (Raptor), there is one that always stood out to be as a pretty bad a type character... 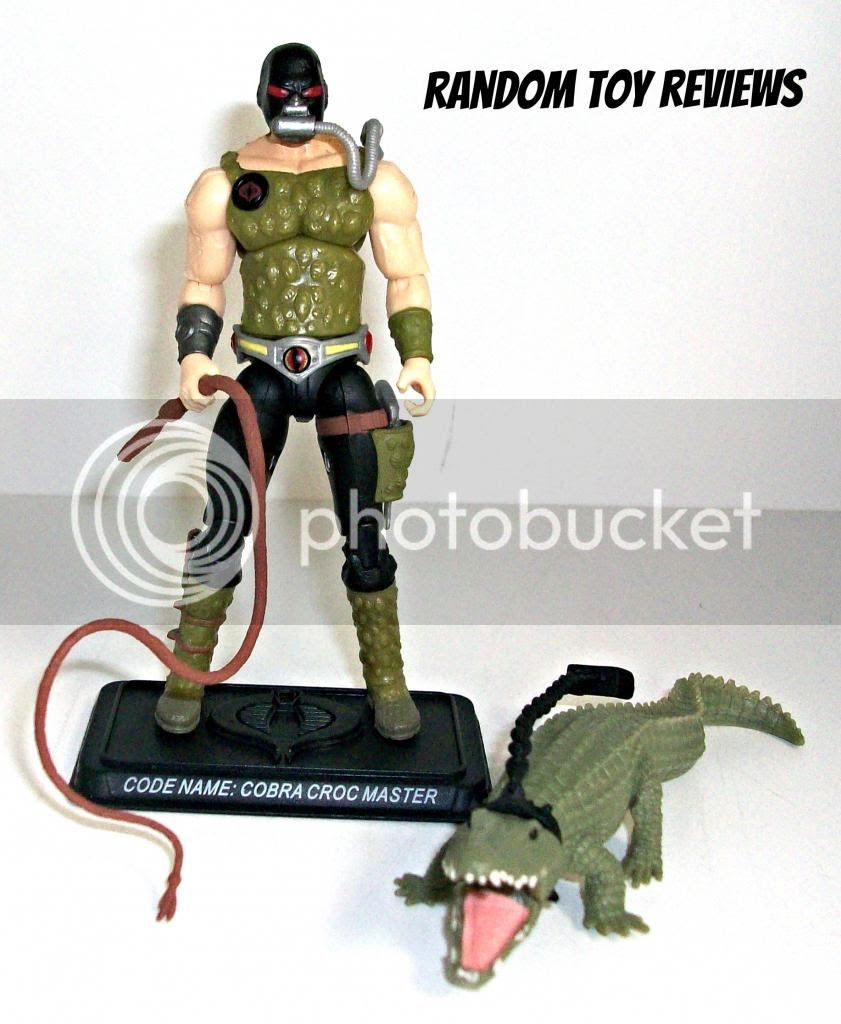 ...Cobra's Croc Master! What kid from the 80's would have wanted the figure of a guy that wrestles and trains alligators and crocodiles. Better yet, he came packaged with a crocodile! Sorry Snake Eyes; sorry Spearhead...your animal partners just can't complete w/ Croc Master!

The 25th Anniversary version of the character looks fantastic. Not much was changed to the overall costume, just updated. He has a six shooter pistol holstered on his left leg that he can wield, but I prefer the look of his Indian Jones like whip. 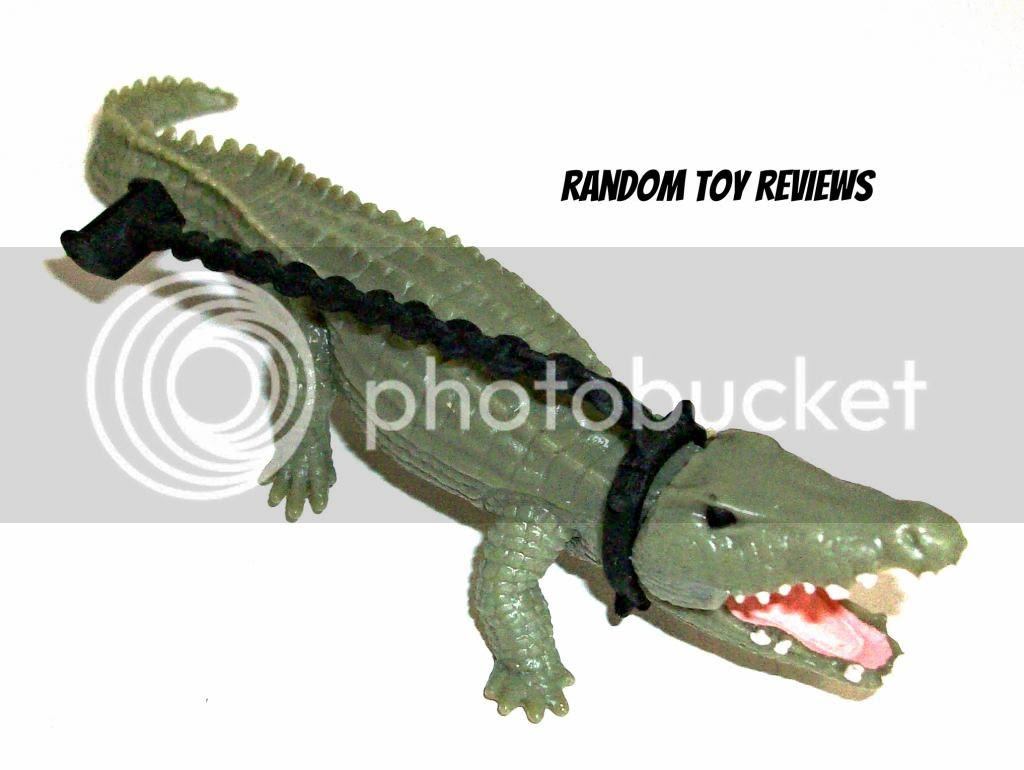 One of best features of this updated Croc Master is the fact that he comes with an updated crocodile toy. This thing has a good amount of detail sculpted right into the figure. The top of the mouth is hinged so it can open and close. The chain leash could be a little longer, but hey I can't complain too much from this release.

Since the 25th Anniversary version was released, this same figure has been used twice. He swapped his normal olive green shirt for a yellow shirt in the Pursuit of Cobra series. The figure would later be used in a 2 pack celebrating the 50th Anniversary of the brand, only this time in red. Even the crocodile was cast in red!

I get that some of the Cobra characters got to be a little far fetched, but Croc Master always seemed to be one of the more grounded characters and one that I could see a terrorist organization that hid in the Everglades employing. No matter which version of this figure you pick up, it's a great addition to your Cobra army.
at 4:12 PM No comments:

Back during my days of collecting every single Transformers Mini-Con / Micron figure, the Megalo Micron Team had to be hands down one of my favorite sets. The molds themselves were pretty cool, but I really loved the white/blue/red unified color scheme. Combine that with the fact that they were made to go side by side w/ Megalo Convoy (Cybertron Metroplex) and you had a winning combination. 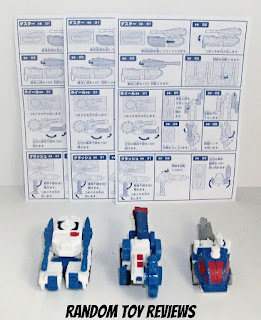 Like many of the Japanese Micron sets, these figures were released individually as store exclusives. Megalo Gritbit and Megalo Zapmap were made available on September 29, 2005 with the purchase of any new Transformers product. Megalo Gritbit was exclusive to Hello Mac stores while Megalo Zapmap and Megalo Zigzag were exclusive to Joshin Denki stores. Tokyo didn't have any Joshin Denki stores so you'll probably find that two of the 3 figures are harder to find and will command more on the secondary market. 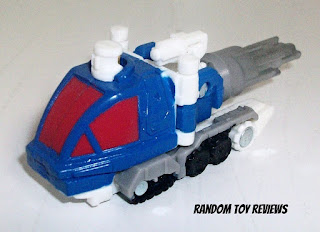 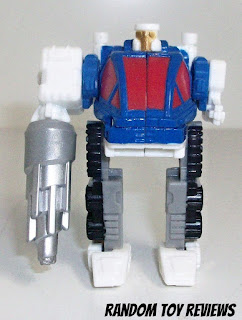 Megalo Gritbit is my favorite of the three. At one time I owned every single version of this mold, a task that took me some time and money to complete. I kinda wished I still owed a few of this mold. 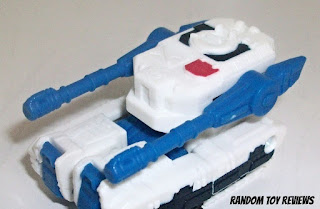 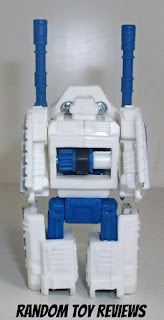 Megalo Zapmap sorely needs some additional paint apps on his robot form. I'm not sure why red wasn't at least used to highlight his visor. Something other than the blue is needed to help break up all that white. 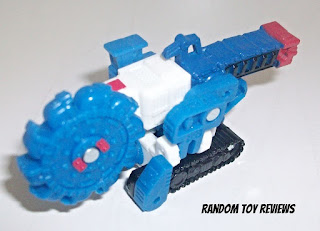 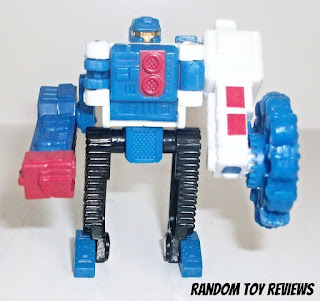 Megalo Zigzag is one of those molds that just takes some getting used to. I used to loathe this mold, but I guess when I started to accumulate the different variations of it the mold started to grow on me. He certainly is colorful in robot mode, more than I can say for Megalo Zapmap. 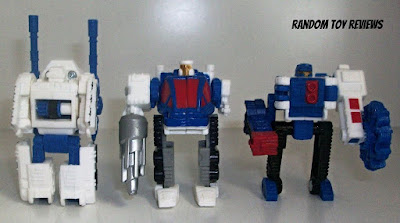 I haven't kept up w/ the secondary market prices of these exclusive Microns, but I know I had to shell out a decent amount when I picked them up new. My guess is that have gotten crazy expensive...if you can find them. Great molds, even better colors, the Megalo Micron Team really is a sight to behold.
at 2:53 PM No comments: