Rise from the Grave...

My good buddy had a little trouble lately w/ his Google products and a hacker recently and had to relaunch his awesome Transformers blog.  If you were following him before make sure to click on the banner above and press the follow link at the top.
at 3:43 PM 1 comment:

If you are like me and you only want a few of the figures from the various Mini
Figure Collections then you were probably let down when series 3 came out without those bar codes that identified which figure was inside the packaging.  While searching the 'net today I found a cheat sheet for both series 3 and series 4.  Gone are the bar codes - replaced w/ raised bumps.  Just flip over the package and look for the very small raised bumps across the bottom of the package.  They can be hard to see, but they are there! 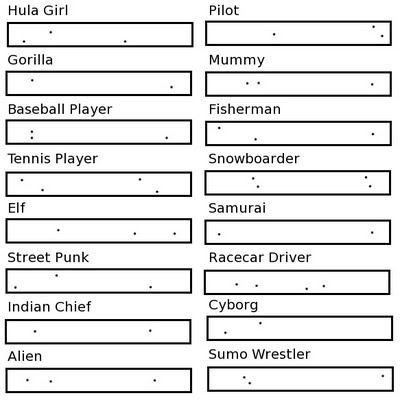 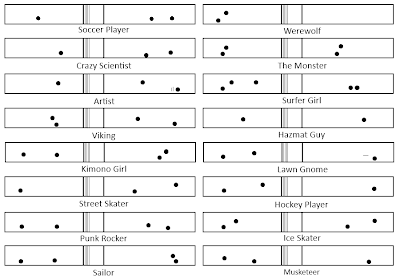 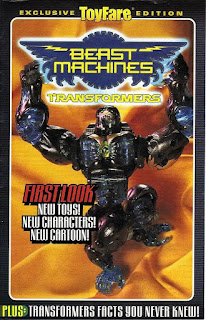 In January 2000 in the pages of the late great magazine ToyFare was inserted this neat little supplemental Beast Machines toy preview guide. I recently came across it again while I was looking for some Beast Wars tech specs for a friend. I don't know how many people remember seeing this so I thought I'd scan the pages and share it with everyone. Click on the images for a larger view. 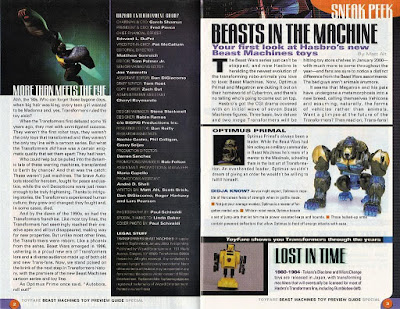 While Beast Machines may not hold the best memories for long time Transformer fans the series none the less was interesting. Thy toys sadly weren't so interesting...at least to me. One of the best things you'll see in this preview booklet is across the bottom of the pages. Simply titled Lost In Time you'll see some tidbits of Transformers information spanning the original G1 toy line, cartoon and the Marvel Comics issues. 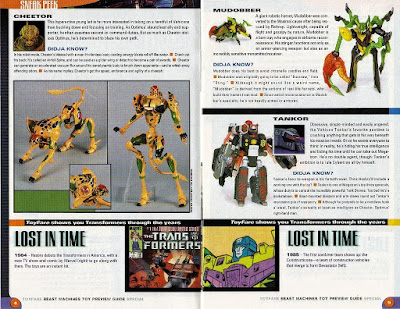 I hate that Cheetor toy with a passion! Just look at those goofy chicken legs in robot mode! I know cheetas are lean animals, but this toy is garbage.

The hornet toy in the top right corner I'm guessing is the single toy that turned off all long time TF fans since it was in the first wave that hit retailers. I was in college when it came out and yes I bought it. I also had instant buyer's remorse as soon as I opened it! Notice the name however? Mudobber eventually became Buzzsaw. What's odd though is in the body of text it says the toy was originally going to be named Buzzsaw, then Sting. I guess Hasbro had a hard time deciding a name for this crappy toy.

Tankor had one of the better Beast Machines toy, but it still wasn't spectacular. At least Tankor in the television show was interesting as the character continued to develop. 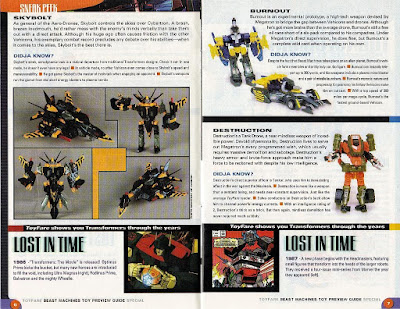 Skybolt here became Jetstorm as most people know. I actually prefer the Skybolt name. This toy wasn't all that bad...it just didn't look like the show character at all.

Burnout is another toy that was renamed before the final release. Mirage was the final name, but like with Skybolt I liked the other name. When I hear the name Mirage I immediately think of the G1 character, not some Decepticon wannabe Vehicon.

Destructicon seemed to escape the planning stages unscathed. This is one weird toy, but I love it. Sure the colors are a little crazy, but there is just something about this basic sized action figure that I like. 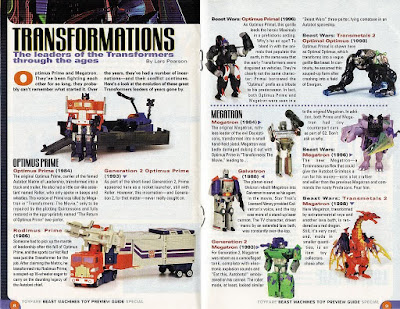 OK, here is where this little preview guide gets better. Lars Pearson did his best at showcasing the various Transformers leaders. Notice the big glaring Optimus Prime error? Powermaster Optimus Prime is labeled as G2 Prime. How can the self professed toy geeks of ToyFare allow this error to go unchanged?!

Megatron also gets some love hear with this various forms over the years. 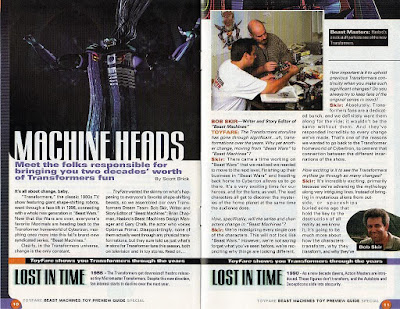 The next part of the guide is a interview with Beast Wars and Beast Machines writer Bob Skir. I know some fans gave him a lot of flak when the shows were still airing on television in the U.S., and granted Beast Machines was hard to swallow in the beginning I can appreciate what was trying to be done with both the overall story and characters. 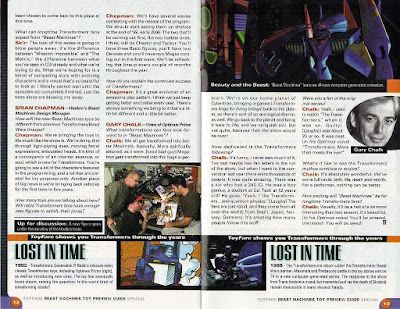 The next part of this feature interviews Brian Chapman, design manager of Beast Machines for Hasbro as well as Gary Chalk, voice actor of Optimus Prime. Gary also voiced Prime in Beast Wars for those of you that didn't know. 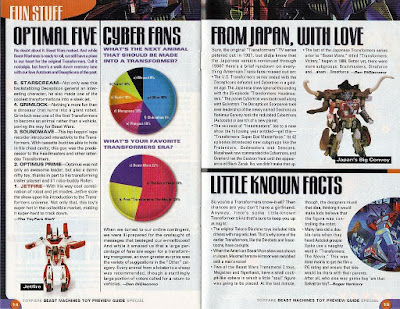 The last 2 pages contain some various poll results from fans and ToyFare staff as well as some info on Beast Wars in Japan (Beast Wars II and Beast Wars Neo - Big Convoy from BW Neo shown).

The Little Known Facts while fun to read doesn't really reveal any new information to long time and hardcore TF fans. Needless to say it's a fun read and I'm glad it was included as not everyone knew the tidbits of info since Beast Wars and Beast Machines helped introduce the Transformers to a new generation of kids and young adults. 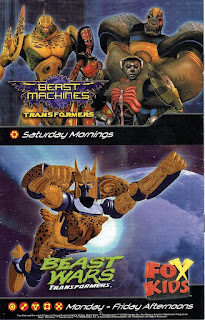 The back of the guide has 2 advertisements for the (at the time) current television shows. I've seen that Beast Machines promo art before, but the image of BW Cheetor flying through space is a new one to even me.

So there you have it, a short walk through of a little TF guide that may or may not have gone unnoticed by the masses.
at 11:26 PM 2 comments:

I have a lot of hobbies - too many if you ask my wife!  While most of my hobbies stand alone I do like it when they cross paths...such as trading cards and Transformers.  I've been known in the past to buy the Japanese version of a Transformer toy largely in part to obtain the included tech spec trading card.  While I can't afford to do that anymore I do actively seek to buy these cards from other collectors.  Occasionally I'll run across a new card to add to my collection (which I plan to share here eventually).  Even less I'll run across something I've never seen before.  Today I'll be sharing some Japanese G1 Transformers trading cards I picked up from who knows where.  I've never seen these before so I can't offer up any information on them outside of the 2003 copyright date on the cards.  I would love to find more of these, but I know that probably won't happen any time soon.  So for now enjoy the pictures.