Back in December of 2013, I posted a quick review of my first Robo Force toy, Blazer. I had forgotten the lot of toys I had purchased actually had two boxed Robo Force toys. These pictures have been edited and sitting in one of my "to do" folders for awhile so why not put them to good use? 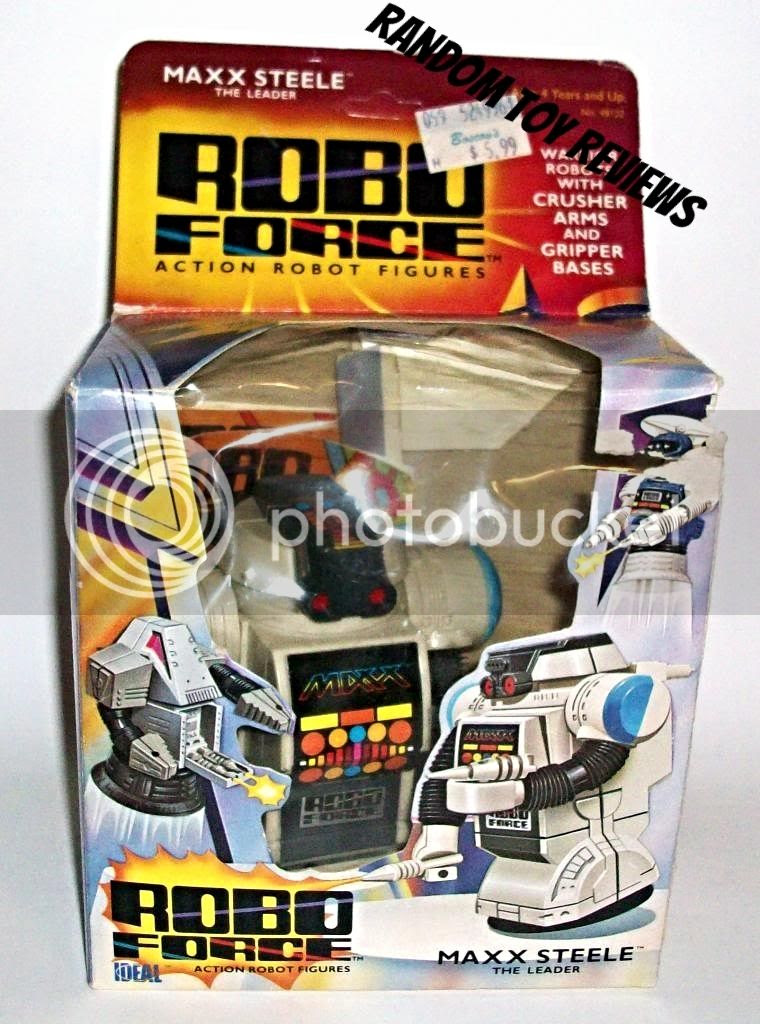 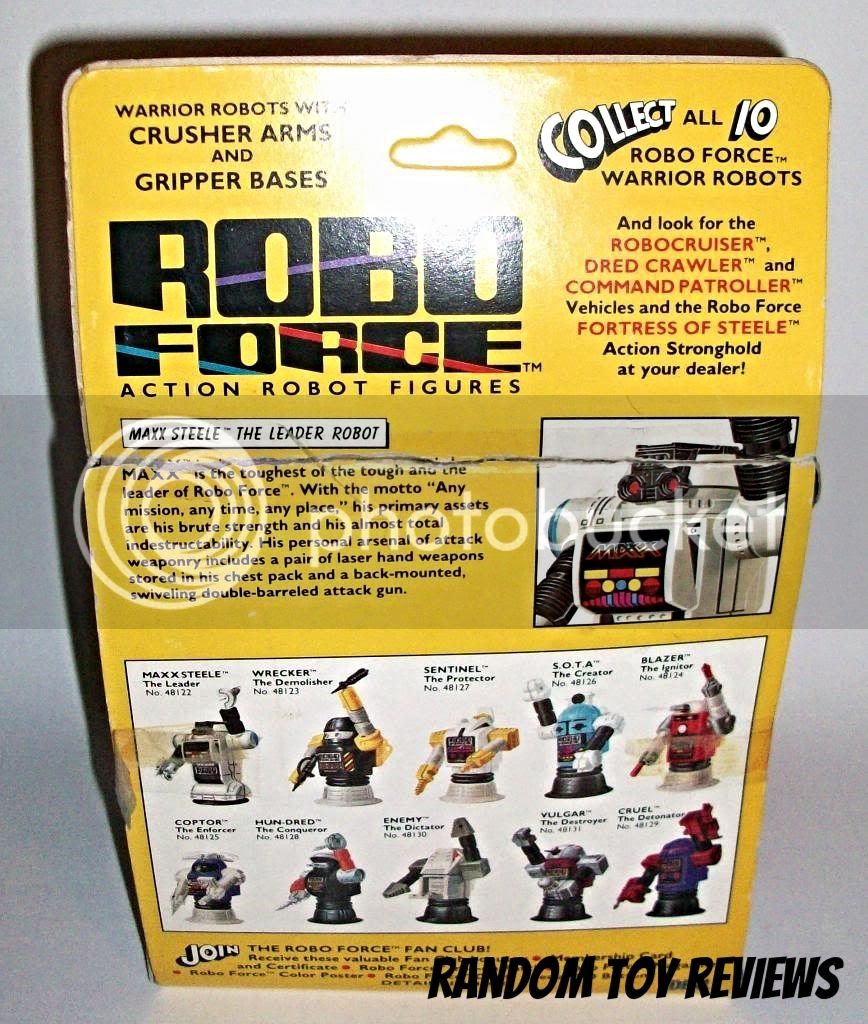 I vaguely remember these toys from my childhood, but I never owned any of them. I was surprised that Maxx Steele's box was in good condition as the other one in the lot I purchased had a very tattered box. Max Steele has a very boring design in my book, however some of the other robots released later looked really cool. 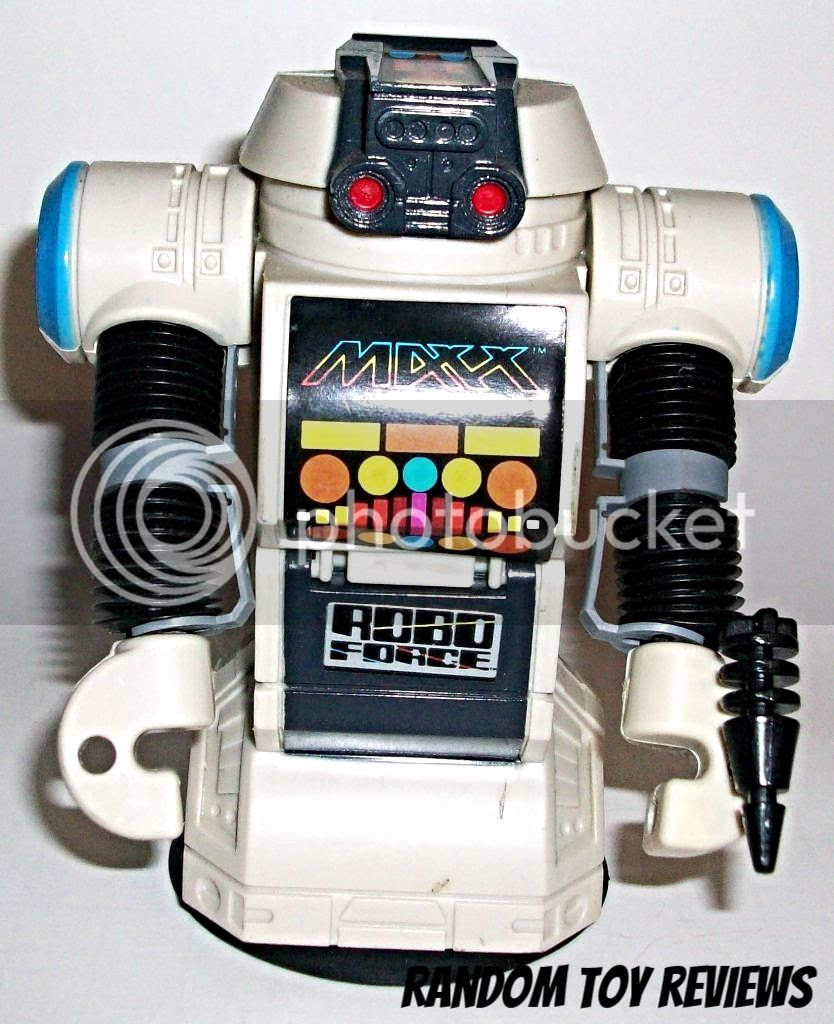 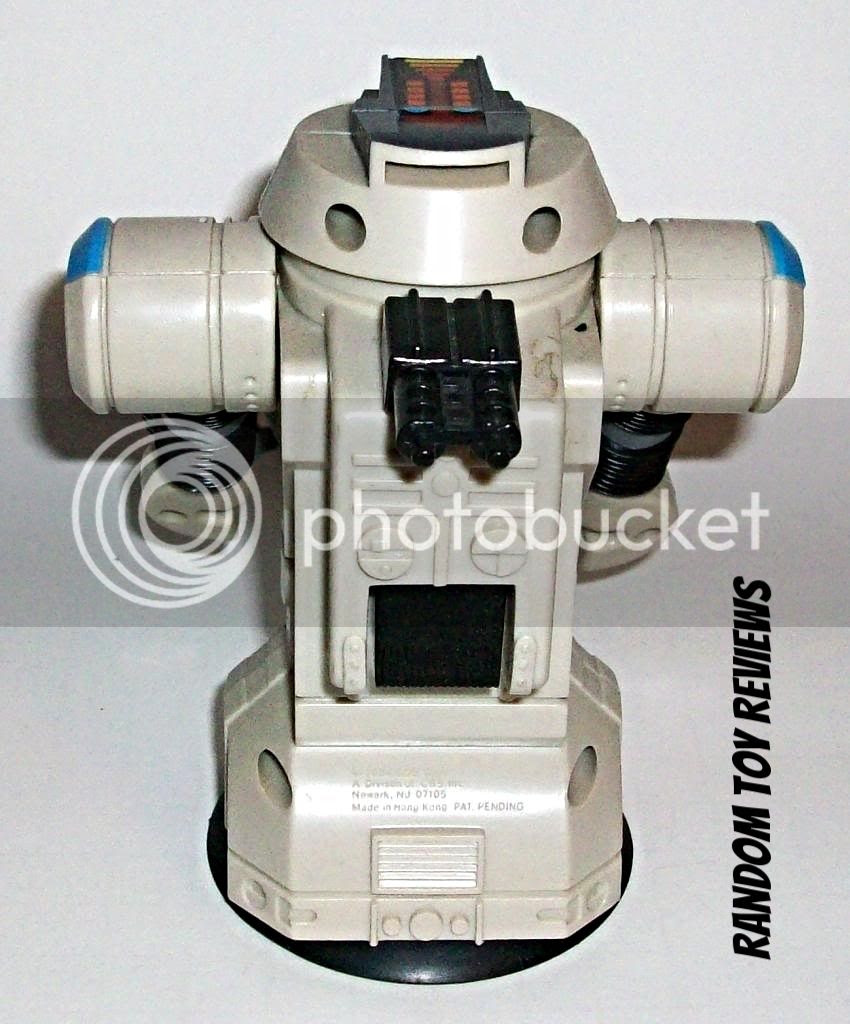 I think it's funny how people thought of robots back in the late 70's / early 80's. The suction cup bottom and the tube arms...this screams 80's. I do have to give it to the designs on the engineering of the arms and how they move with the press of the button on the back of the robot.

I guess I can see the collectible niche of these figures. While they really aren't for me, I was glad I had a buyer at Charticon in 2013 that was more than happy to take off my hands the two Robo Force toys I had at the time.
at 10:21 PM No comments:

I wasn't sure what I thought after I watched the first episode of the new Transformers Robots in Disguise animated show. It looked different and had a more "kiddie" feel to it, however I gave it a chance. With each new Decepticon that was introduced in the show the more I enjoyed it. It almost felt like the show writers were following the Scooby Doo formula...each episode featured a new scenario and villain. Once Thunderhoof made his debut he quickly became one of my favorite Decepticons on the show. I mean, what is there not to like about a mafia like tough guy w/ a New York accent that just happens to have antlers?

Sadly when it came to getting a toy of Thunderhoof fans had to wait. Eventually Hasbro released the character as a one step changer and then as a legion class toy. Thankfully Takara Tomy stepped up to the plate and announced a Warrior class (i.e. deluxe) figure was on it's way as part of their Transformers Adventures series. Finally, I have a great show accurate figure and I couldn't be happier! 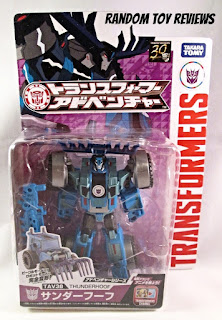 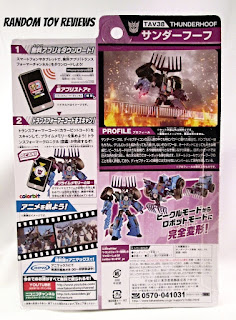 The packaging is your standard blister card with the bubble taped to the card. I was surprised it wasn't the type of packaging where the backing card could easily be removed from the plastic blister. None the less it's still some very attractive packaging. Packaged inside are a set of instructions as well as a poster/catalog. Sadly no character tech sec card. 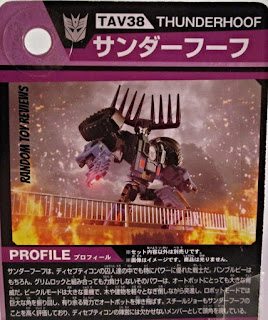 In place of a character card, the profile is posted on the back of the blister card. I'd love it if someone could/would translate this. 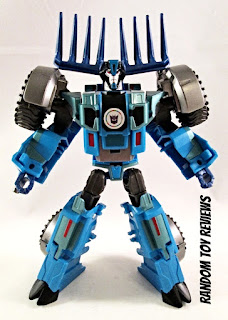 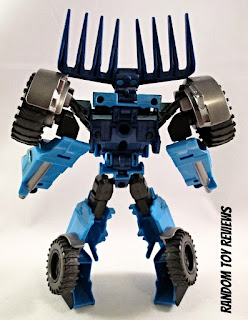 Thunderhoof is a beautiful figure, let me start of by saying that. It seems like the molds used for this series (Hasbro's RID as well) have been hit and miss. Some of the toys look nothing like their show counterparts, while others suffer from being hollowed out in places. While I still have a good many figures to open, this toy quickly jumped to the top of my favorite list. For starters the mold feels solid. The plastic doesn't feel cheap and I never thought any part of him was going to snap in half during his transformation. The figure is well articulated and is generally a fun toy to play with. Combine that with the premium paint applications courtesy of Takara Tomy and you have yourself a winner. 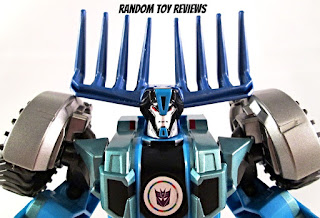 Thunderhoof's main color is that of a turquoise blue with black used for the limbs. On his chest is a nice metallic pearl turquoise. His wheelwells are a shiny metallic silver and when combined with the shades of blue he stands out as a great looking figure. 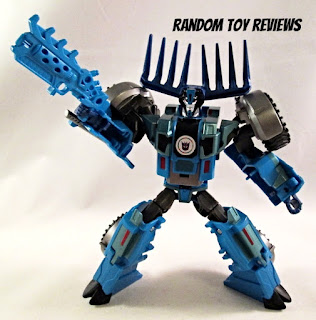 Thunderhoof is aptly named for his animal like features. His antlers are easy to notice, however check out his feet. Hooves...that has to be a first for Transformers. He comes packaged with a very interesting looking shotgun. Look carefully at the top of the gun and you'll see something that looks like antlers. Flip that around and it would look like one of the guns from the video game Gears of War. 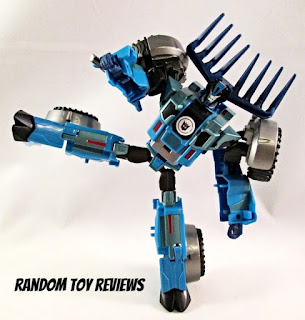 Articulation is pretty good on the figure, much better than the poses I came up with. His shoulders are on ball joints, but because of the wheelwells and the antlers there is some restriction. His waist can rotate a full 360 degrees, but that is mostly due to the transformation. Hips are on ball joints while he has a mid thigh swivel. Knees are hinge joints and the lower leg is on a pin. This gives you some movement, but again it's part of the transformation. 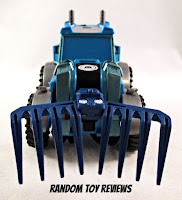 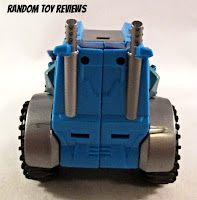 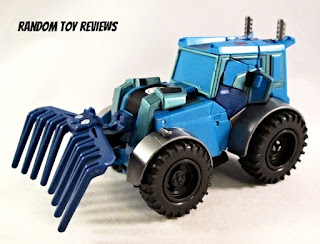 I was surprised at how small and compact Thunderhoof was when transformed into his alt mode. Everything snapped together and held in place just fine and his large wheels rolled across both smooth surfaces and carpet with ease. I love the fact that he transformers into a combine tractor and it's surprisingly fun to play with in this form. The "teeth" on the front can be lifted up a little. 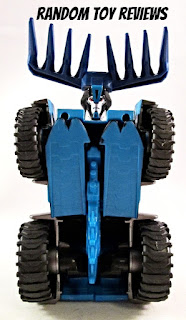 I didn't see this documented anywhere on the large instruction sheet, but you can place his shotgun right in the middle of the underside while in vehicle mode. It fits in perfectly and doesn't hinder the toy rolling on the ground. 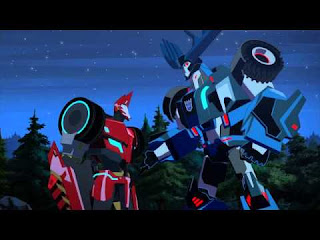 As much as I love this toy, Thunderhoof is a little undersized. Take a look at the screen shot above from the animated show. 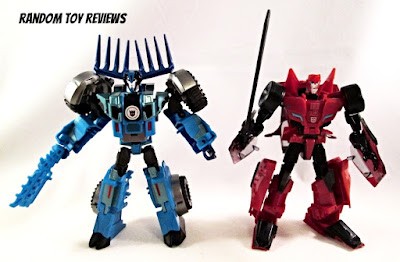 None the less this is one of my favorite RID/Adventures figures thus far. The Decepticons have sorely been outnumbered in Hasbro's series so it's great that more characters are on their way. The Hasbro version of this figure should be released to retail around the time of this post, however if you don't want to wait or just want a more show accurate deco look no further than the Adventures version. 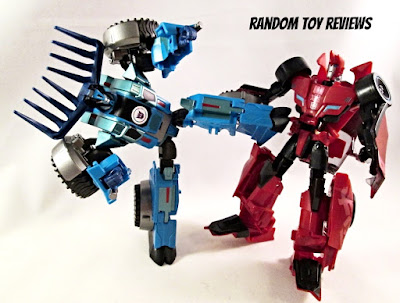 It doesn't seem that long ago that LEGO had the Teenage Mutant Ninja Turtles license for building blocks. Now said license has transferred to Mega Bloks and boy are they making good use of it. A quick stroll down the building block aisle at my local Target and I see several different sets of varying sizes for TMNT. 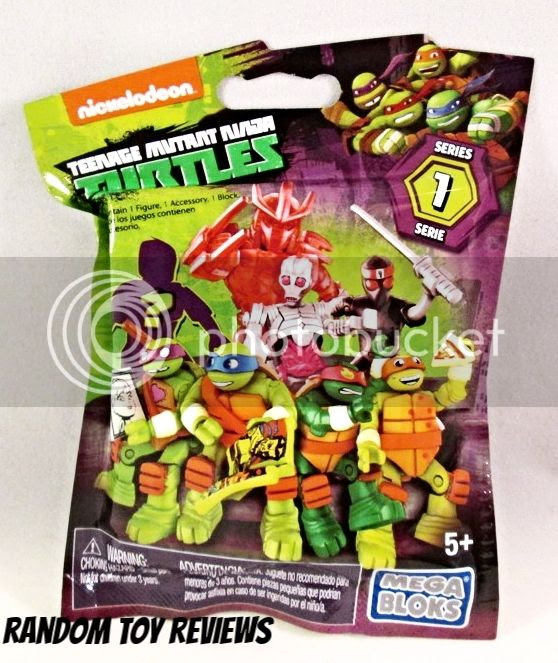 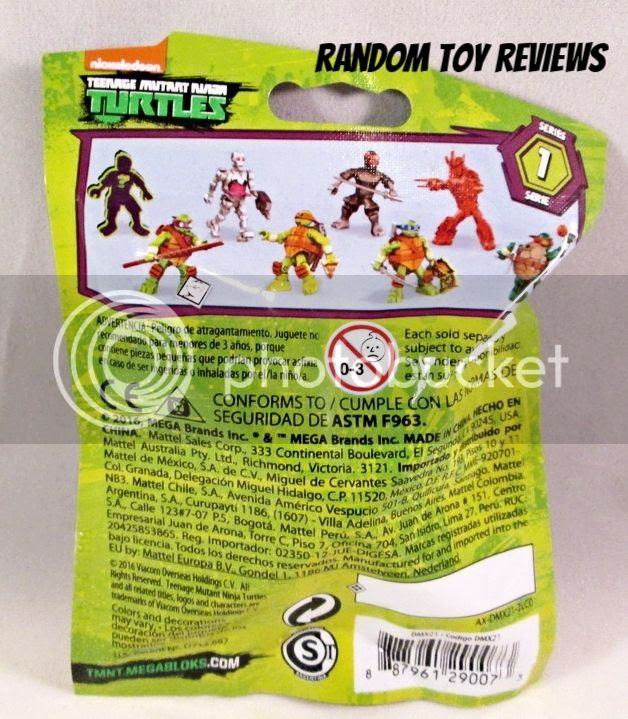 Being a sucker for blind packaged toys I had to pick up one bag (or maybe a few more!) to see what Mega Bloks was doing w/ the TMNT franchise. A quick scan of the back of the packaging and I see a total of 8 possible figures - the 4 turtles, Krang, a Foot soldier, a translucent red Shredder and a mystery figure. 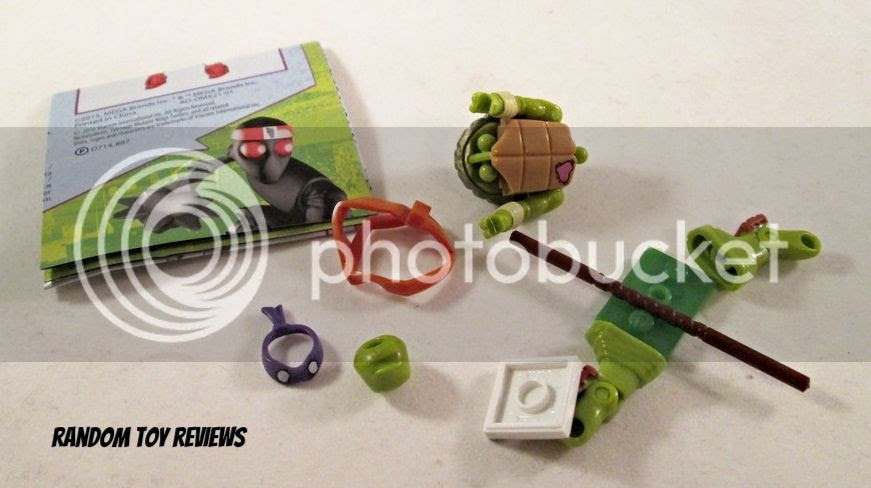 Finding a bag w/ one of the turtles is rather easy thanks to their rounded shell. Two (Donatello & Raphael) of the four turtles are easier to obtain than the others. I'm not sure what the significance of the red Shredder is and I still don't know who the 8th mystery figure is. 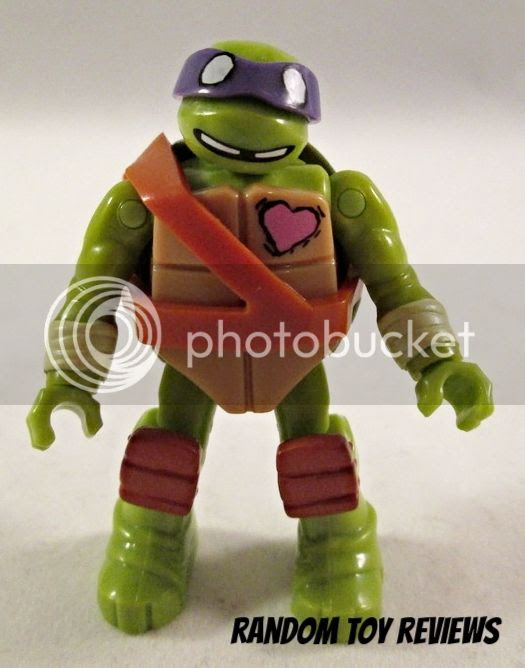 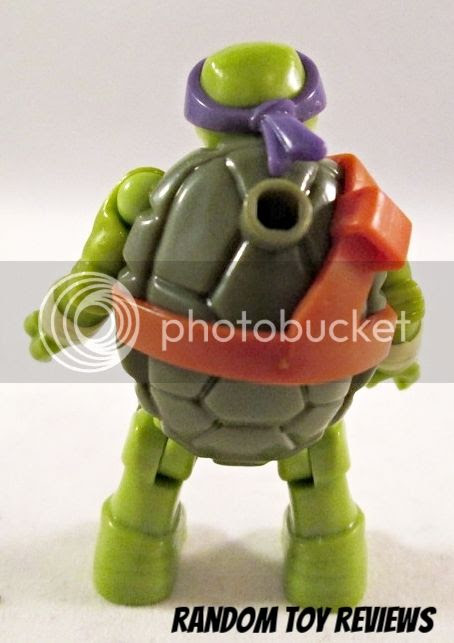 I have purchased a few of the Mega Bloks Halo sets so I kinda knew going in what these figures would be like, but I didn't expect the figures to be this nice! The level of detailing for a $3 bling packaged figure is amazing. The figures are based off the current Nickelodeon show so they have goofy facial expressions and the large knee pads.

The figures have to be assembled. The arms were already attached in the bag, but they do pop off. The turtle head has mold bumps for the eyes, this helps keep the bandana on, but it also makes it hard to fit the piece on the head. The belt is a rubbery plastic that you have to stretch to fit over the body of the figure. I like that you can sheath Donatello's bo staff on the back. 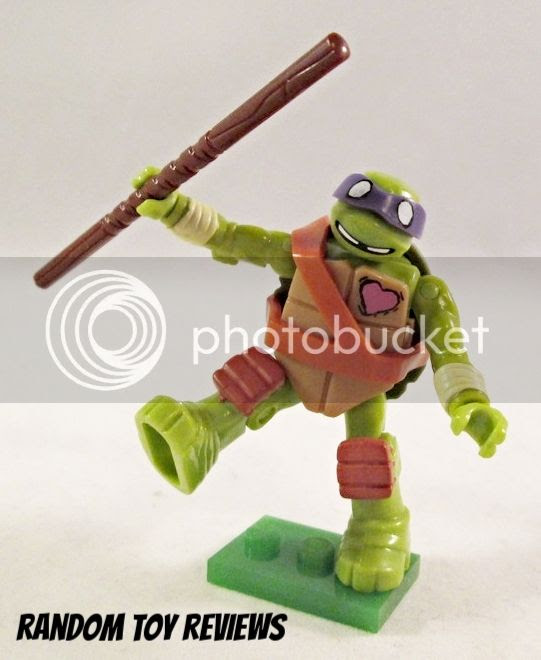 The figure has a good amount of articulation for such a small figure. Ball jointed shoulders and hips and hinge joints at the knees. Sadly no elbow articulation, but the wrists to rotate a full 360 degrees. 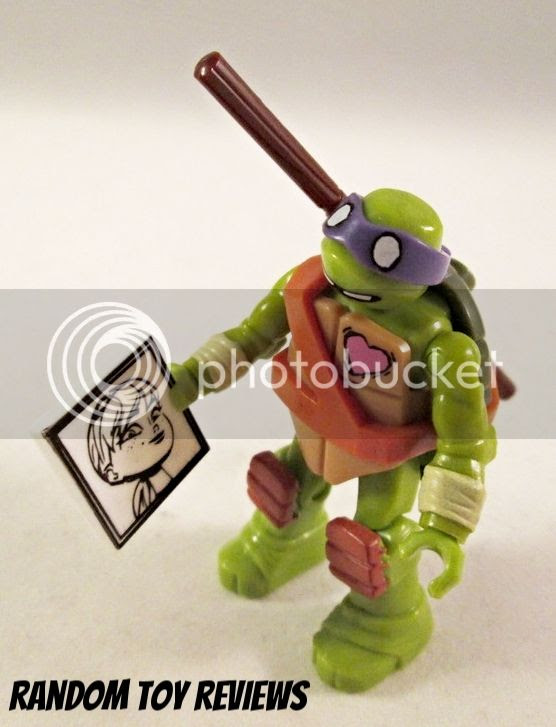 If you're wondering why Donatello has a heart painted onto his front side, it's because he's been staring at this sketch of April O'Neil he comes packaged with.

Overall I really like what Mega Bloks has done with these figures and I eagerly await the 2nd series of blind packaged figures. I don't know if I'll pick up any of the larger sets, but I do like how the Turtles that come in those sets vary in deco from these blind packaged versions. At only $3 each, I encourage you to pick up a bag or two and check out these fun little toys. 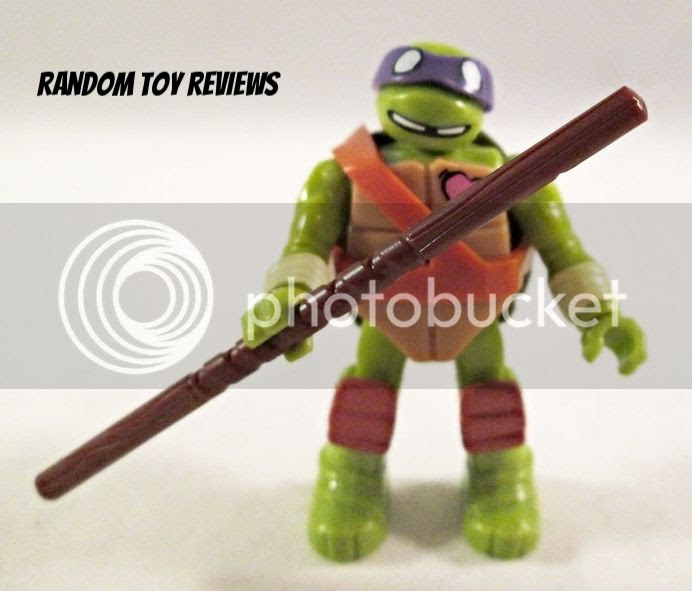