I love Hasbro's Power Core Combiners. Perhaps it's because the single packaged Transformers came with new Mini-Cons. Perhaps it's just the whole combining aspect, but whatever the case I loved the toys and bought just about every individual release. That said you can probably guess that my excitement was rather high when I heard that Takara Tomy would be releasing the Power Core Combiner toys in Japan under the United banner. What I wasn't excited about was the high price tag attached to most of the toys via online retailers.

I was happy to skip over the giftset type releases with the drones, although some of the paint and deco changes Takara Tomy made are quite appealing. I decided I would go after the new versus themed 2 packs because you know Mini-Cons are kind of like Pokemon in the fact that you gotta have 'em all!

I decided to make the EXP-03 set my first (and as of right now my only) United Power Core Combiner purchase. This was an easy choice as the original Hasbro toys were some of the best. Heavytread = Tankmaster and Undertow = Marinemaster.

Takara Tomy has done an excellent job with the packaging of these toys. The box is long and slender with no wasted space. The colors are very bright and vibrant and eye appealing. These boxes had to stand out on Japanese retail shelves.

The back of the box has the most language I've seen on Transformers packaging! The top half of the box features some nice original artwork as well as a story. Sadly I don't read Japanese and haven't found a good translation of the story online yet. The bottom half of the box gives you info and tech spec rankings for both characters.

Here is a close up of that spectacular artwork. You can see that the Decepticon Tankmaster (who looks a lot like the G2 Combaticon, Brawl) holding Grimstone in a headlock of sorts. Fitting since the box lists his function as Assassin. Behind him the Autobot Marinemaster is coming in to rescue his teammate. 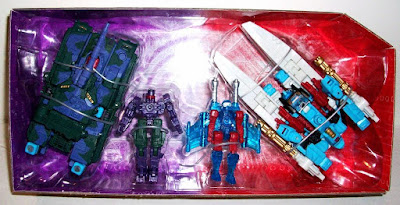 The versus style packaging isn't anything new. You can go back into the early 80's in the original Japanese G1 line to find Autobots packaged with Decepticons, however my first real exposure to this format was with Takara's Beast Wars. Open up the box and both toys are twisty tied down to a form fitting plastic bubble, resting inside nice cardboard insert; each side sporting their faction's respective color.

Moving on from the packaging, let's take a closer look at the Decepticon Tankmaster and is Micron partner, Wheezel. 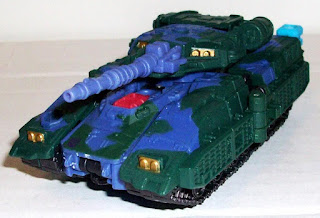 As much as I loved Hasbros' take on this mold as Heavytread, I absolutely love the new darker colors. I mentioned above that he vaguely resembled G2's version of the Combaticon Brawl, however Tankmaster's green is of a darker shade. Instead of purple camouflage there is now a blueish purple. The only aspect of the tank mode that I don't care for is the bright red plastic used for the robot's head (as seen up front, just below the turret) and of course the Allspark blue Power Core connectors located on the back of the tank. Takara Tomy didn't bother to change the color plastic used on these connection ports on any of the Power Core Combiner toys. Bummer. 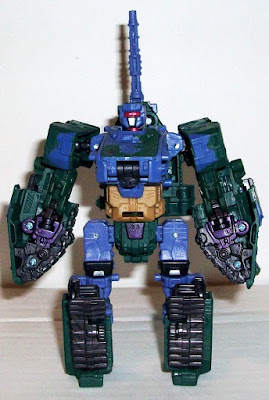 Tankmaster looks equally as awesome in robot mode as he does in tank mode. The beige midsection may look a little off and out of place, but it does help to break up all that green. The only drawback with the robot is the lack of light piping in the head. I love the square G1 looking head sculpt and with visor type eyes, but the designers really missed a good opportunity in using translucent plastic over opaque. 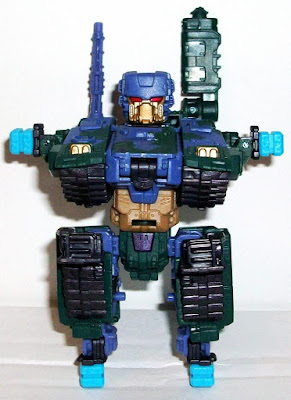 I've yet to attach any drones to Tankmaster's combiner form, but I'm thinking my newly acquired TFC Iron Army may look mighty nice paired up with him. 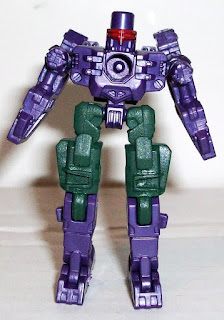 Wheezle, Tankmaster's Micron partner has to be the weakest Micron design I've seen in awhile. While the robot form looks OK, Takara Tomy did improve this toy by using non-translucent plastic and by applying some red paint to the face. Hasbro's Mini-Cons were devoid of any paint apps and the translucent plastic made most of the small figures just look weird. Now the alt form of this figure is very odd...so odd that I didn't bother taking a picture of it in weapon mode or in "power up armor" form. 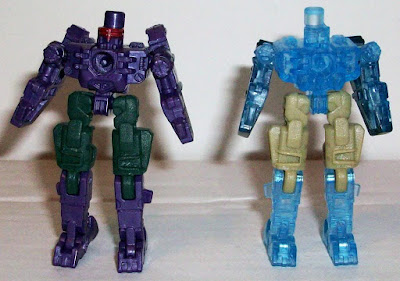 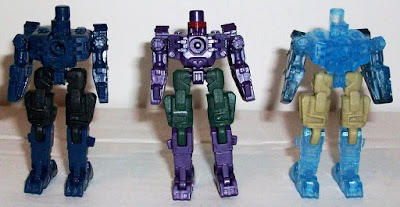 For completionist's sake, here are all 3 versions of this mold. The far left is from one of the Micron campaigns held over in Japan. 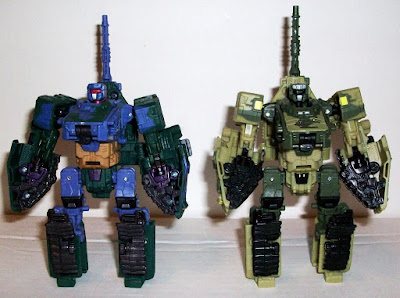 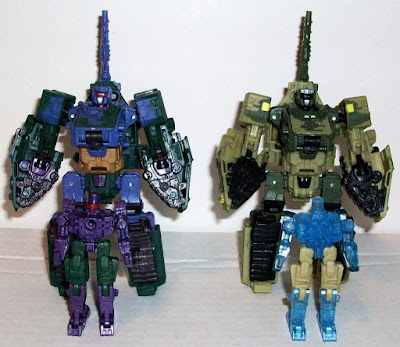 You be the judge.  Which version of this mold do you prefer. Takara Tomy or Hasbro?

Coming in a close 2nd as my favorite mold, this power boat looks fantastic as both a Decepticon and an Autobot. Marinemaster now sports a more friendly looking deco compared to his Hasbro Decepticon counterpart, Undertow. The blue and white and touches of red and gold all blend in well together. 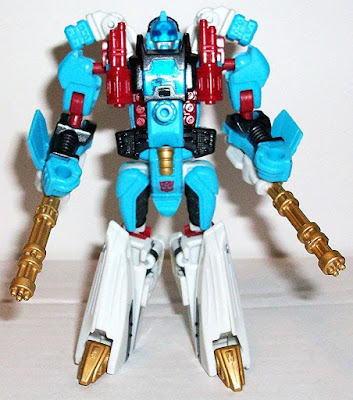 One of the nice things about the blue used for the majority of the figure is it is the same shade as the Powercore connectors. See how well they blend in (behind the head)? This is one of the better designed robots in my opinion as well. Not only is it well articulated, the hull of the boat forms the legs and feet and gives the robot good stability. The mini cannons mounted underneath the arms can be rotated a full 360 degrees so you can choose to display your Autobot well armed or have them stowed away. The robot's head sculpt also looks fantastic, though the placement of the Autobot symbol on his crotch seems a little weird. 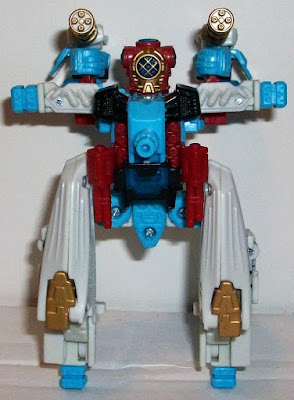 The combiner's head is hands down one of the best head sculpts I've seen. It reminds me of the G1 Decepticon Pretender, Octopunch. The only drawback is that of all the drones released none of them are seacraft. Attacking tanks, helicopters, jets and armored vehicles to this torso just seems a little off to me. 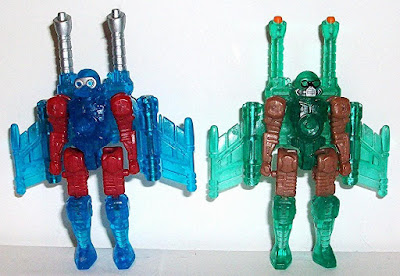 Marinemaster's Micron partner is Rotorbolt. He by far shares one of the best new Mini-Con/Micron molds. Interesting enough Takara Tomy decided to keep the translucent plastic in place that Hasbro used, only switching from a green to blue. This of course was to match the toy it was paired up with. I only wish Takara Tomy would have applied some silver or black paint to the mouth or breathing apparatus, similar to what Hasbro did with Waterlog.

All of these Power Core Combiner Mini-Cons/Microns were supposed to be Targetmasters, however not all of them look the part (see Wheezle). There is no doubt that Rotorbolt and Waterlog here are Targetmasters.

Left to right we have the Micron campaign exclusive, Pinpointer, Rotorbolt and Hasbro's Waterlog. 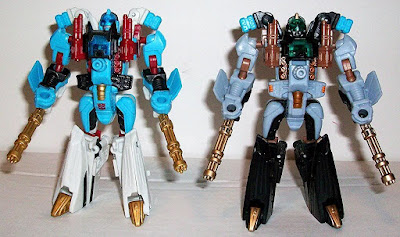 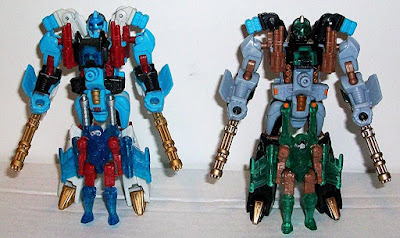 In my opinion you really can't go wrong with either version of this toy. Not many molds can pull off looking convincing as an Autobot and a Decepticon, but this isn't the case here.

I'm a little saddened that there doesn't appear to be any more plans by either Hasbro or Takara Tomy to use the Power Core Combiner characters. I'm sure the Japanese fiction would be a great read. All I can hope for now is for some of the IDW creative staff to use these awesome characters in some version of the Transformers comic at some point in the near future.

While these United versions of the PCC toys can still be a little expensive, this is a set worthy of importing. If you look hard enough this set can still be had for around $45. 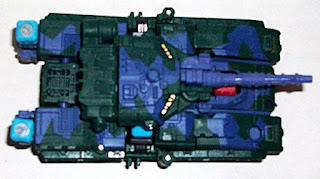 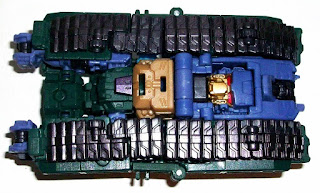 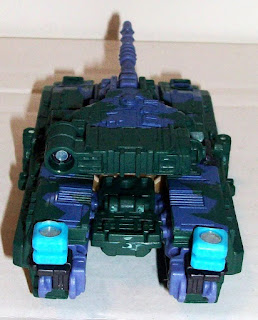 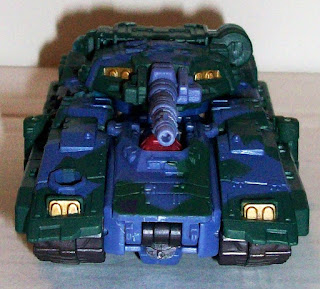 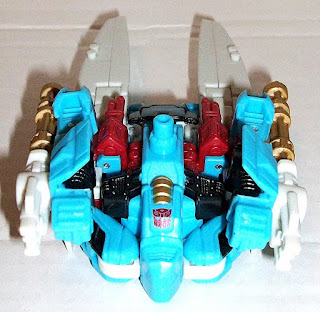