It's been awhile since I've featured an eBay auction, but I've got a good one here for you today. If you are a fan of Mini-Cons / Microns then check these out. 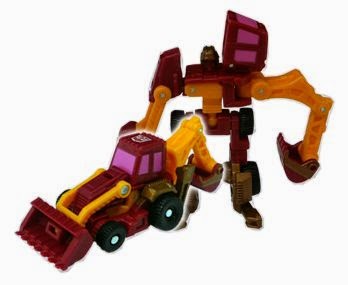 To celebrate the launch of the Revenge of the Fallen line in Japan, several stores gave away free exclusive Microns with a minimum purchase of 2,000 yen. The Mighty Micron Team. I took me awhile to piece these three little figures together as it seemed there just weren't as many floating around on the secondary market. Perhaps poor ROTF toy sales in Japan helps prove my theory of their scarcity?

Mighty Bull, Mighty Dozer and Mighty Stra - Microns that first made their debut in the Micron Booster series. These toys were never some of my favorite molds, but I love the orange deco on Mighty Dozer and the blue police car deco used for Mighty Stra.

Since I made the tough decision to let the majority of my Mini-Con / Micron collection go several months ago, these are some of the last of the campaign Microns I have left. I've had these in my eBay store for awhile, but decided to move them to the auction format for the next 7 days. I've also dropped my original asking price and made the opening bid only $74.99.

If you're not interested in these, but know someone that may be please pass it on. I'm gearing up for a local show next weekend (Saturday, 10/25/14) with lots of other Transformer goodies. Some of these items I may offer online via a "pre-sale" next week. Any unsold items at the show will be added to my eBay store.