With Pepsodent from India - Yo Joe!

G.I. Joe is known as being a Real American Hero, but the popularity of Joes has proven to be quite popular elsewhere...such as India.  In know that sounds odd, but one of the reasons for this is a company called Funskool.  At some point in the 90's Funskool purchased (or borrowed, not sure) some of the original Joe ARAH molds from Hasbro.  A lot of these figures feature different paint and accessories than their U.S. counterparts and the plastic used is generally of lesser quality.  The figures proved so popular in India that Funskool worked out some promotions with Nestle and Pepsodent (toothpaste).  I believe the Nestle deal fell through, but there 10 exclusive figures produced and packaged with a tube of Pepsodent toothpaste circa 2003. 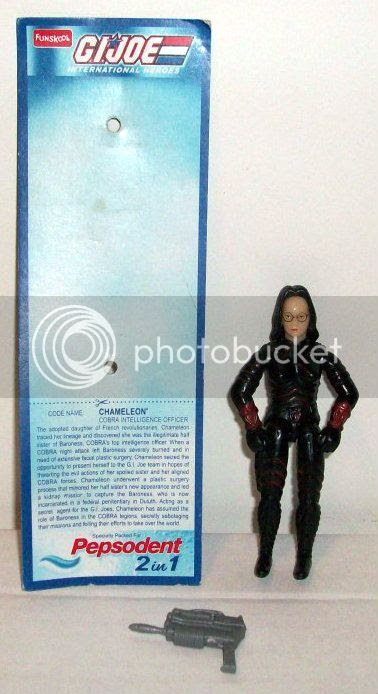 I bought this figure during my G.I. Joe glory days.  I had previously bought some carded Funskool figures and liked them for what they were (cheap & unique figures) so I thought why not buy a promo figure such as this.  Outside of the toothpaste these figures came tied to these flimsy cards with a random weapon.  I happened to get a fun that I believe originally belonged to Battleforce 2000's Blaster.

This particular figure is of Chameleon - Cobra's Baroness twin sister.  I remember first learning about this character in one of the Joe reissue line of toys.  From the included bio card it doesn't appear Funskool changed anything about the character. 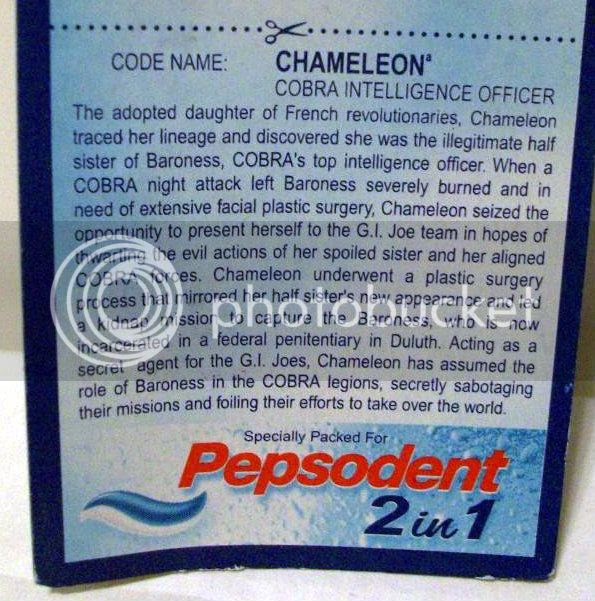 The figure itself is based on the 2000 release of the same character, but the build of the Pepsodent figures is different from the mainline figures.  Articulation is limited to the neck, shoulders and hips.  Outside of this the figure also looks different in the face/head area.  Of course the plastic and paint apps are sub-standard, but the hair looks as if it was glued too far back on the head giving her a rather large forehead.  The figure also lacks a painted Cobra emblem on the chest area.

I can only recommend this figure for completests.  I don't know how many were made, but she can easily be found on the internet for less than $5.  If you really want it just let me know and it's yours for the price of postage!