In my quest to expand my knowledge of Transformer toys I've often searched out information and websites on the history of the brand and pre-Transformers. I've found some great resources over the years - such as TF-1 and fellow blogger heroic_decepticon's blog.

I won't begin to try to go into any level of detail on the background of this piece as I'm still trying to learn it's history myself! What I do know is I stumbled across a beautiful piece of Transformers history.  his particular piece was right up my alley which made it that much more desirable.

Growing up in the early 80's the Sunstreaker was my first Autobot car from the initial 1984 series. I've always searched out every version of the character I could find, but I've had to draw the line when it came to the 3 pre-Transformers versions thanks to inflated prices on the secondary market. I would have loved to own the red version, but I'm just as happy w/ the yellow Countach LP 500S.

First off you may be able to tell this is the Italian version of the toy and not the Japanese. No big deal. What puzzled me was the red images of the toy when the toy was yellow. From what I've found this particular release was made during the time Hasbro was rolling out the actual Transformers brand. None the less the box is beautiful. Small, but beautiful. My specimen isn't free of damage however. The upper corner has a small ding and there is a small crease in the front bottom just to the right of  the "Auto Robot" block of text.

The back of the box in typical fashion shows other toys released. Here you can see the other two versions of the Countach LP 500S. Not sure why the white/black police version is labeled as Fairlady Z.

I love the image on the top of the box. "Sunstreaker" has got to have one of the best looking alt modes of all the Transformers. As much as I love the traditional black and yellow it doesn't look too shabby in red either. I so hope Takara Tomy finds a way to alter the upcoming Masterpiece Lambor/Sideswipe and make it into Sunstreaker. I can dream, can't I?

The box's bottom shows a diagram of sorts of the vehicle. Too bad all the text is in Italian. It appears there are some statical information across the bottom a la a tech spec. Can anyone shed some light on this?

Surprisingly the styrofoam insert tray was still fully intact and snow white. The two things about this picture that I had to get confirmation on was the missing Diaclone figure and the inclusion of the 3 chromed missiles. I was told this version never came w/ the driver figure, but the same insert was used from the Japanese Diaclone release. As for the missiles I'm still searching for an answer. The instructions show some goofy football shaped "bopper" missiles. Also included are two fists and two rocket boosters. 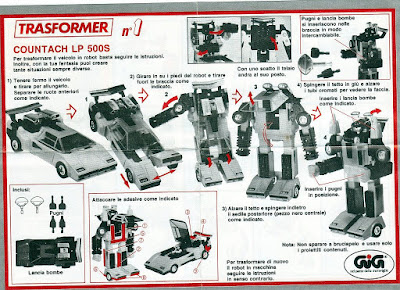 The instruction sheet doesn't offer really anything new, although it does show a Diaclone figure in the car. I'm guessing these images were re-used from the original Japanese release. What I wasn't expecting was anything printed on the back. 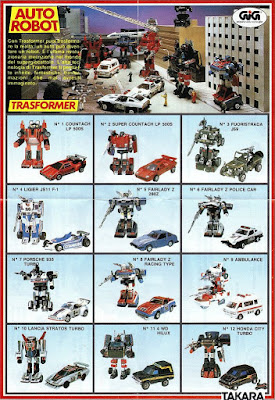 I love old toy catalogs / posters. I really like the blue & silver "Bluestreak". The Lancia Stratos Turbo aka Wheeljack looks really odd. From the head to the legs it just looks odd. I knew "Skids", the Honda City Turbo was released in silver, but black? Doesn't look too bad in black. Never had that mold as a kid, but always liked the look of the van and robot modes. 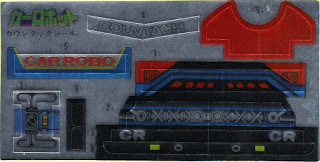 Behold! A beautiful unapplied sticker sheet! Someone asked me if I was ever going to sticker this toy up and I had to pause and just stare at them. Seriously I asked. Why on earth would I want to do a thing like that?! I don't necessarily care about re-sell value or anything like that, but this is a once in a lifetime find for myself so it's going to stay as is. In fact I probably won't even want to remove this toy from it's packaging ever again. 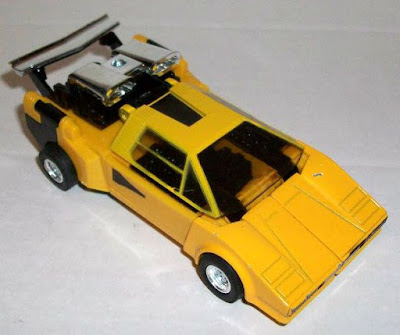 I can't tell you how bummed I was when I pulled the toy out of the tray and saw the small chip on the hood. Argh!!! It's not a huge deal. In fact for a toy that is nearly 30 years old it looks pretty darn nice. The rubber tires look great - no cracking. The silver chromed spoiler and engine are free of chipping or fading and the yellow paint is nice and vibrant! 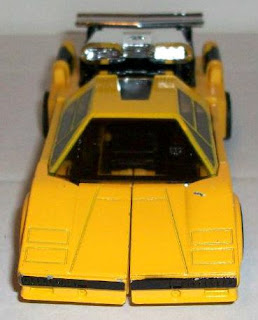 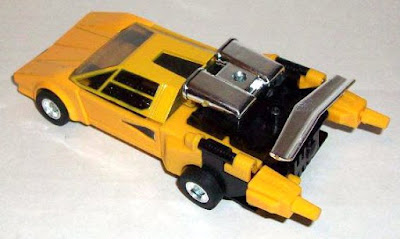 I never quite understood the rocket booster accessories - in either mode. They don't look that bad in vehicle mode, but was this ever shown in the old Transformers instruction booklet for Sunstreaker? I will mention these boosters fit inside the holes much tighter than on my G1 version. 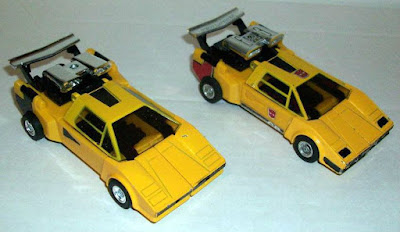 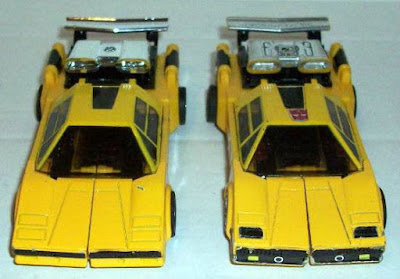 As nice as the stickers are, I almost prefer the natural unstickered look...especially on the chrome. 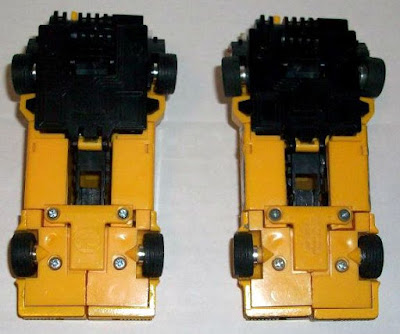 I tried my best to get a good picture of the markings on each toy, but my camera and it's focus just didn't want to cooperate. The Diaclone is on the left and the G1 version is on the right. You may be able to see the outline of a circle on the Diaclone version. Inside the circle is the traditional Takara stamp and Japan printed. On the G1 version it has some Japanese characters, Takara Co, LTD 1980 * 1982 * Japan listed. 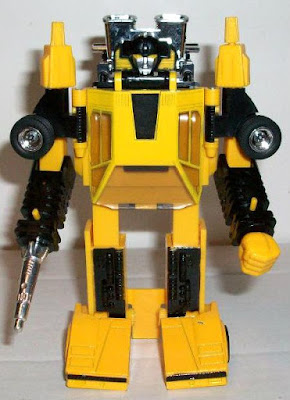 My only gripe about the robot mode are the "gorilla arms". I've never cared for the overly long arms, but I can overlook this issue after recently finding out this toy was the very first transforming car to robot toy designed by Kōjin Ōno.  Also of note are the inclusion of springs in the forearms.  These were removed for the Transformers release due to U.S. child safety laws.  After firing one of the missiles I an see why...the missile traveled a good 15+ feet! 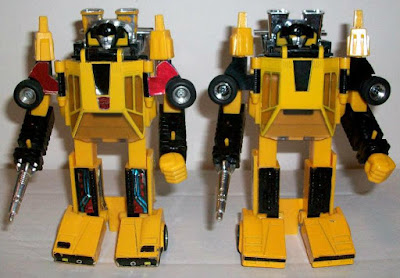 There aren't any real differences between the two toys outside of some of the decals.  My G1 Sunstreaker has seen better days (loose joints, sticker & chrome wear) so it is really nice to have such a tight and super minty toy!  I know this may not be the most desirable Diaclone piece, but with many Transformer collectors moving into the Diaclone collecting arena I'm glad I was able to add this piece to my collection.  I doubt I'll be buying anymore pre-Transformer toys anytime soon so for now I'll just sit back and revel in this awesome piece.
at 9:23 PM