Nickelodeon has brought the Teenage Mutant Ninja Turtles back to television for a whole new generation and Playmates has followed suit with a new line of toys.  In the first wave we were given all 4 turtles, April and Splinter.  To off set them were Shredder, Krang and a Foot Soldier.  In wave 2 some new faces were introduced for the Foot Clan and a familiar face for the Turtles...Metalhead! 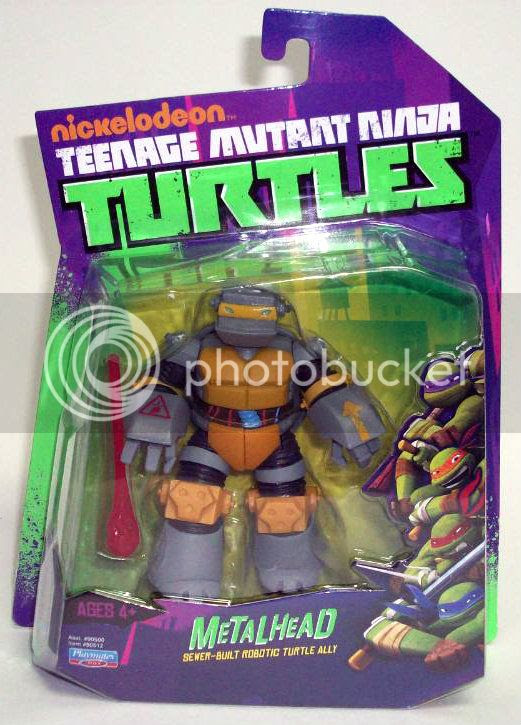 I grew up with the original line of TMNT and Metalhead was always one of my favorite characters and toys.  I was excited to hear he was going to be part of this line of toys.  Going in I drew the line at the 4 turtles and Shredder, but upon seeing Metalhead in person I knew he had to come home with me.

Metalhead comes in the same familiar blister card packaging that the rest of the figures have come in thus far. 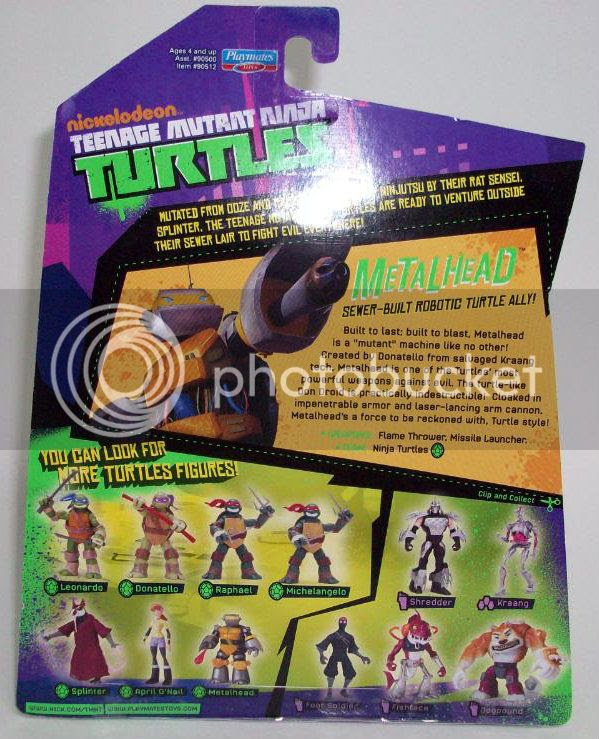 The back of the card gives you his bio along with a cross sell of other figures available.  New to wave 2 are Metalhead (of course!) along w/ Fishface & Doghound.  I don't know how many of these new characters are packed per case.  When I got Metalhead there was no sign of either of the new Foot Clan members.

Just like in the original series, Metalhead was created and built by none other than Donatello.  I like how Nickelodeon and Playmates are keeping some of the series true to its roots while putting a fresh spin on things. 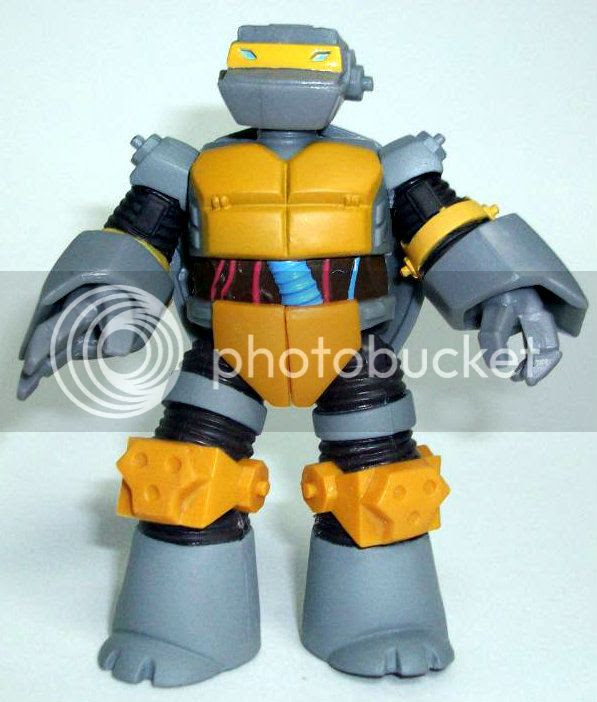 I absolutely love the look of this guy.  From the matte gray used for the robotic limbs to the exposed wires in his midsection...this guy rocks.  Playmates did a good job retaining some of the original look while giving the figure that fresh makeover the rest of the turtles received. 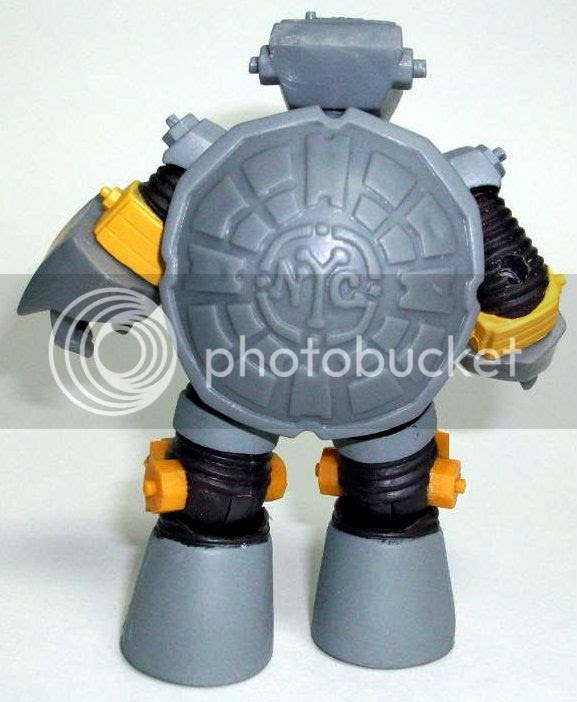 I love how his shell is modeled after a New York City manhole cover.  Sheer genius!  I guess the shell could benefit from some small paint apps, but that just may be me being nitpicky. 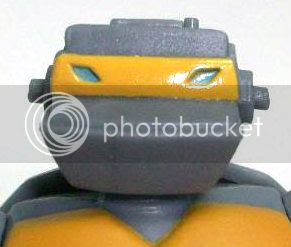 Metalhead retains his box shaped head complete with yellow bandana mask.  He even has those Frankenstein like bolts on the side of this head.  This awesome head sculpt does rest on a ball joint giving the head a small bit of range of motion. 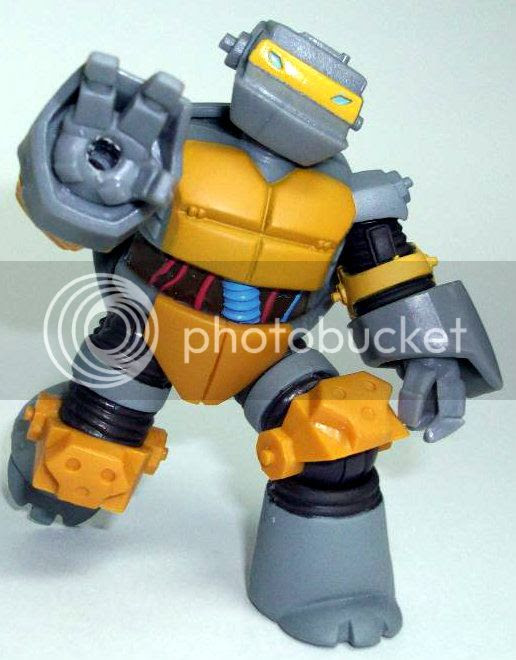 Metalhead isn't as near articulated as the turtles are, but that is to be expected since he is a robot built from Krang's scraps.  The elbows, hips and knees have hinge joints allowing back and forth motion.  The arms can rotate around a full 360 degrees. 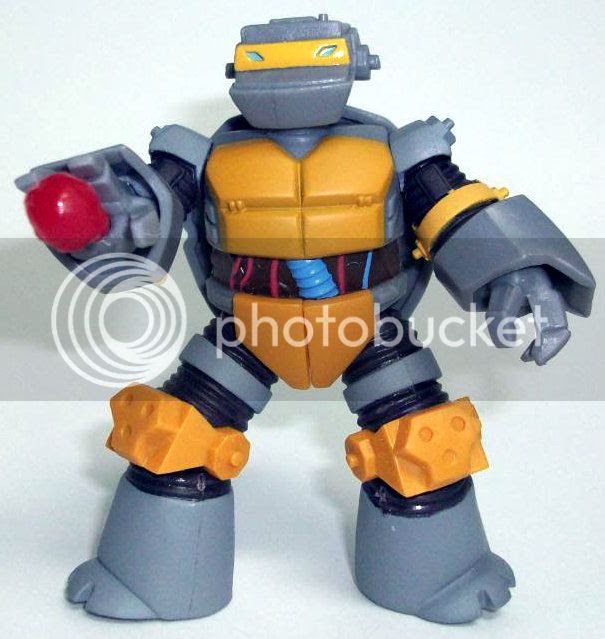 As you can tell he also wields a flame missile in his right hand.  Surprisingly this is not spring loaded - it's just a hole that runs all the way through his hand.  Once you insert the missile it gets a little snug - the back hanging out the back of the arm.  Then with a gentle push the missile shoots out.  Perhaps a spring was omitted for safety reasons or just for cost saving.  Either way I'm fine with it. 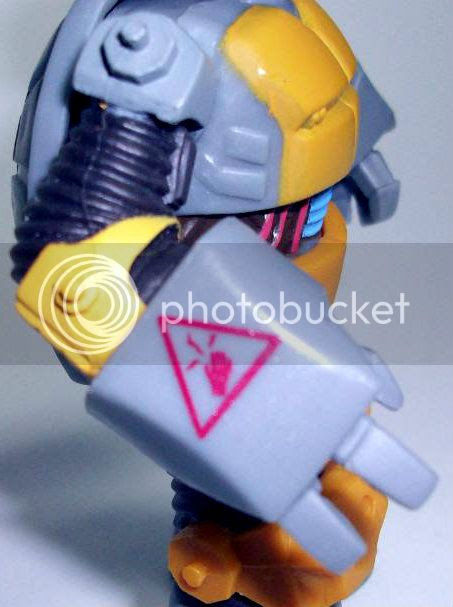 Outside of the abdomen area there aren't a lot of paint apps on the figure, but on the side of his rocket launcher gauntlet is a small warning symbol.  Outside of maybe some battle scar the figure really doesn't need much more paint.  Playmates has done an excellent job capturing this character in plastic form.

As I mentioned earlier I don't plan on buying many more figures in this line, but if you were going to buy a non-TMNT figure that isn't a part of the Foot Clan then make Metalhead be your first choice.  I doubt you'll regret it.