In 1996 Hasbro and McDonald's teamed up to promote the new Beast Wars line early on. Finding the regular Happy Meal toys isn't very hard, but one toy has eluded me for a long time. Simply known as Under-3, this toy was only given to parents that asked for the special pre-school toy. Now one may wonder why a 35 year old male would want a pre-school toy. Simple. It's Optimus Primal. 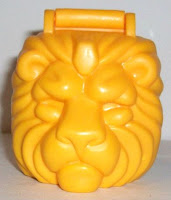 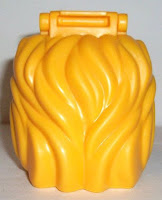 You thought the Happy Meal Transformers were simple? Under-3 is a large yellow lion head with a hinge on the top. Nothing more, nothing less. 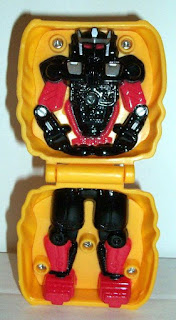 Flip the lion head open to reveal the robot. One of the easiest transformations ever! I still can't quite put my finger on why this simple toy is so cool and why I wanted it so much. I just know that I've (somewhat) actively searched for this toy since 1996. I've seen it in mixed Happy Meal toy lots and I've seen it being offered in a complete McDonald's Beast Wars lot, but the prices have always been ludicrous...especially considering it is a pre-school toy. Anyhow my search is finally over and Under-3 now resides in what remains of my Beast Wars collection.

I know the colors don't scream Optimus Primal, but a look at the robot's head/face tells you who this character was modeled after. I also find this toy to be cool for the fact that it was possibly the forerunner or inspiration for the Beast Wars II character Lio Convoy in Japan. Coincidence? We may never know.

Fun fact: the robot's toes double as latches to keep the lion head folded up.
at 9:51 PM