Bio:
Most Decepticons are so grim it's impossible to imagine they have fun doing anything, but not Decepticon Reverb. He charges into battle with a grin on his face, singing a happy song from the old days. Using the wash from his rotors, he can create a thudding sonic cyclone that traps those beneath him, shattering glass, twisting metal and destroying audio sensors. The ultra loud thump of his rotor has meant doom for many unfortunate Autobots.

I'm back with an all new review. Today we'll go back to the first line of Transformers movie toys and look at canceled Target exclusive! Don't ask me why it was canceled or where the seller I bought it from got it, but I'm excited to hold Reverb in my hands. So let's take a closer looks at one of my favorite helicopter Transformers. 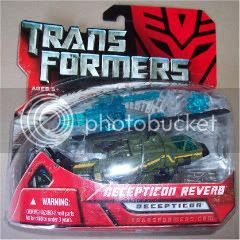 Decepticon Reverb comes packaged in the familiar layout used for all of the first movie Transformers. The toy was meant to be a Target exclusive, but was canceled before it saw a mass release. Note the familiar Target exclusive sticker is missing from the blister bubble. The only difference I noticed on the packaging is a small sticker was placed just under Ages 5+ that read 80402. There is also a large red sticker with a bar code covering the bottom of the cardboard insert with what appears to be Spanish. 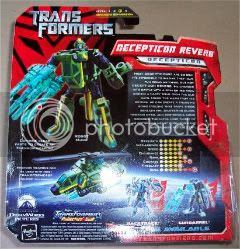 The back of the packaging has a very nice layout. You get a shot of the actual toy in both robot and vehicle modes, highlights of the toy, the character's bio and a cross sell of the other 2 canceled Target exclusive scout class figures, Backtrack and Gunbarrel.

As I mentioned earlier I love this mold. I love helicopter Transformers in general, but this is one my favorites hand down. I already own this mold 5 times over (both Energon & ROTF versions + the Transformers Collector's Club exclusive Topspin), but I didn't hesitate adding one more version to my collection! My first impression upon taking Reverb out of the bubble is that his color scheme just screams Waspinator. The olive green, yellow stripe down the sides and even the black on the legs. There are bits of "Allspark blue" on the toy that stand out, but thankfully the color was used sparingly. The intakes on each side of the cockpit and the tips of the robot's toes are the only blue bits. The helicopter's cockpit is cast in a translucent light blue.

I should mention that I forgot to fold up the tail fin to it's upright position before snapping the picture. How unprofessional of me! 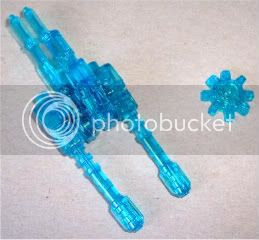 Just like the previous versions of this mold Reverb comes packaged with an Energon weapon and Energon chip. There are no changes made so if you've seen these then there isn't much else to look at.

Reverb weaponized with his Energon armaments. The gun can be attached in different ways. This is the default mode...basically how it comes out of the package. As you can tell with the gun attached the helicopter doesn't sit firmly on the ground...the nose wants to fall forward a bit. 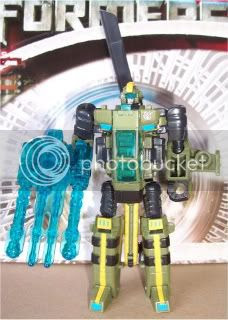 Due to time constraints I didn't photograph the Reverb in any action poses or from different angles, but let me go on the record to say the robot mode is fantastic. For a scout class toy there is plenty of articulation to go around. The head turns a full 360 degrees, the shoulders, elbows, hips and knees are all ball joints so some great poses can be pulled out. The helicopter's tail piece does hang down in the back, but it's never obstructed any of the poses I've displayed this toy in. The main helicopter blades do fold down and effectively make one blade so you can display it either way. I just forgot to fold it down before photographing the toy. What's wrong with me today?!

I think the Waspinator color scheme really stands out even more in robot mode! The olive, yellow and black work really well though. I could care less for the Energon weapon as it's too big in my opinion to make an effective hand held weapon. I do like the translucent blue light piping used for the robot's eyes. Here lately it seems like fans are on the fence when it comes to the light piping used in the robot's heads. It doesn't bother me and I think it's a great touch. 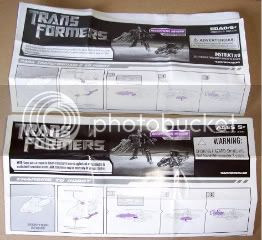 In closing I am so glad I decided to get in a group buy of this figure over @ TFW2005.com. With shipping it only set me back $27.00 which isn't too bad considering the chances of this figure having a mass release are slim. In hindsight I wish I had sprung for his "Combaticon" brother Gunbarrel. The mold is the exact same as the Energon, ROTF and Transformers Collector's Club versions so if you have those then there is really no need to buy this figure. Chances are it'll be overpriced if you come across it on eBay so just save your coins. It's a great scout class Transformer, but other than a new coat of paint nothing else is new.
at 3:56 PM