Day 2 at the Heroes Convention brought lots and lots of people into the Convention Center.  I haven't heard any attendance numbers yet, but I overheard several dealers early this morning talking about the disappointing crowd on Friday.

I for one enjoyed Friday thanks in part to the smaller amount of people in attendance.  Let's face it the price of the dealer's tables aren't cheap and not everyone setting up is "professional" - as in they do this for a living.  A lot of the smaller dealers had to get creative in how they set up their space and a lot of them utilized the space under their tables w/ 50 cent or dollar boxes.  That said its already hard enough to browse these cramped selling environments and boxes on the floor, but add in a LOT more people to the mix.

That's not to say the day wasn't fun or deals couldn't be had, but I bought far less today.  I think I walked out w/ 33 books.  Several of these however were key issues that I've been searching for for a long time.  Always a nice feeling when you finally get the chance to cross off on your list that issue(s) that has been eluding you for quite some time.


One of the perks that came w/ my 3 day advance ticket was early admittance to the convention and today I took advantage of it.  While my brother sat upstairs waiting for the doors to open to everyone else at 10:00 am I got to head downstairs early.  The line to get in this morning was ridiculously long so I headed over to the elevator for a little short cut!

I was on a mission.  Late yesterday I found a dealer that had just reduced his dollar books to 50 cent.  I only bought a few because he said he was going to mark the books down again to 25 cents just before closing today and for all day Sunday.  That said I grabbed 2 issues of the old Marvel series Super-Villain Team-Up.  I couldn't believe they were in a dollar box much less marked down to 50 cent.  I grabbed issues 6 & 7 yesterday thinking issue 6 was the first appearance of the character The Shroud.  I was wrong.  So I headed back to that table to grab issue 5 (which was the first appearance) and the rest of the books from that title.

When I hit the sales floor this morning however I was surprised to see how empty it was.  I just saw this incredibly long line to get in today so where was everyone I thought. 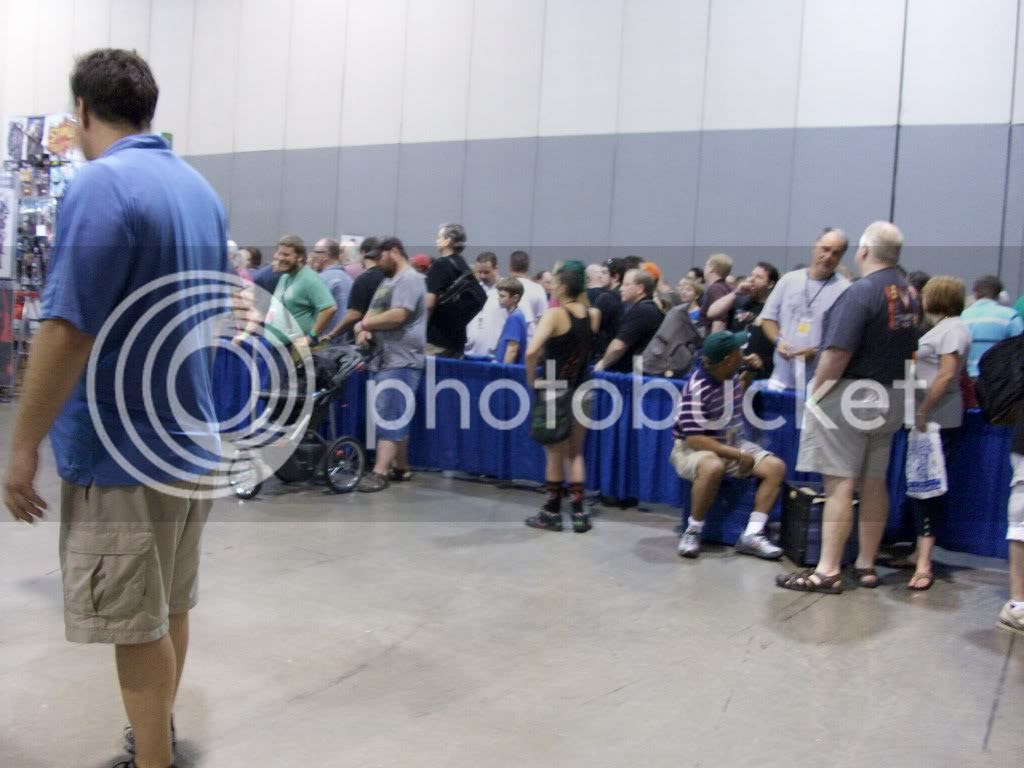 They where here - in line for a chance of an autograph and or picture of the legendary comic creator Stan Lee.  While it's cool that he was there and a host of many other creators that has never been my cup of tea.  I may try and get Mike Zeck to autograph an issue of Captain America tomorrow, but I won't go out of my way. 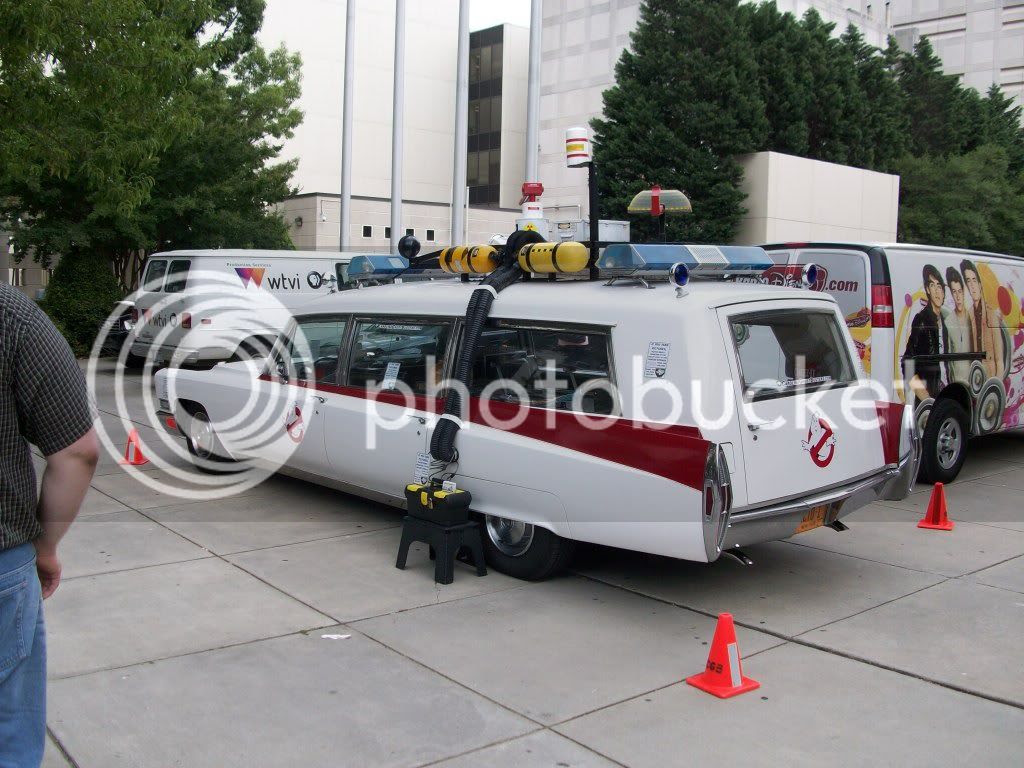 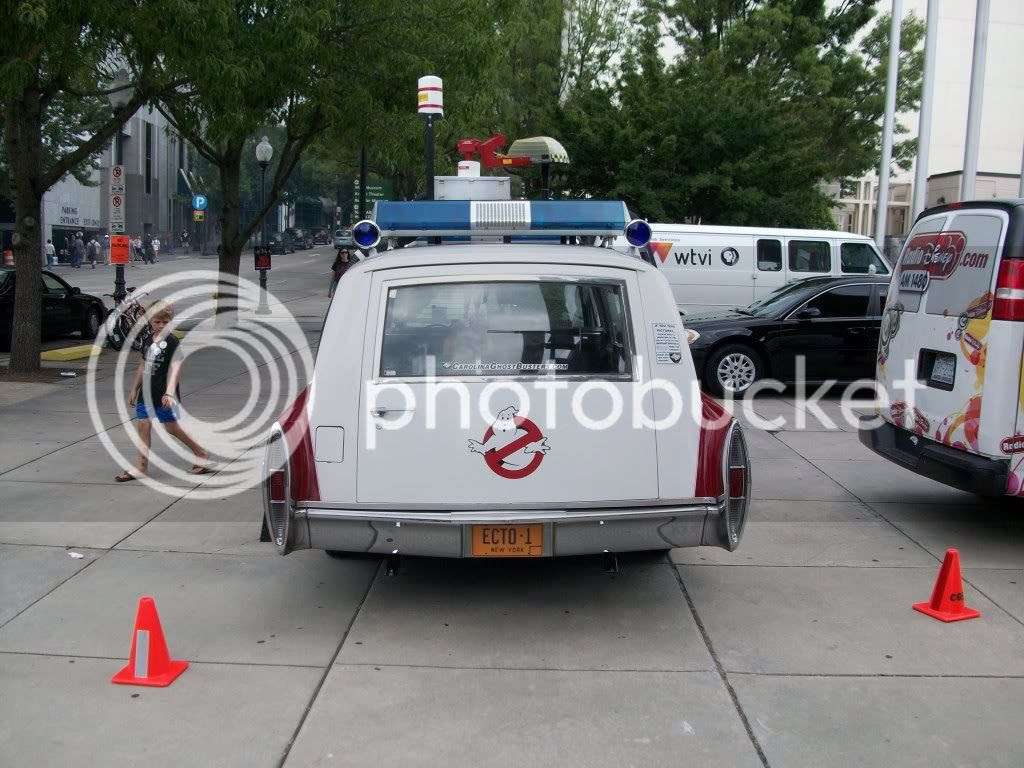 On the way out to drop off our comics in the car and grab a bite to eat we saw that the Ghostbusters' Ecto-1 was parked outside of the Convention Center!  These guys are local so I've see the car at other comic related functions, but I've never had my camera on me before.

I saw them pull up late Friday and the guys were posing in front of Ecto-1 w/ all of their gear on, but for whatever reason I didn't snap a picture.

The cosplay people were out in force today.  I saw a lot of great costumes and I'd love to have gotten pictures of them, but I still feel weird going up to them and asking for a picture.  Some of the more notable costumes I saw today were of Iron Man, the Black Widow, Spider-Man, a Umbrella Company soldier (Resident Evil), Sub-Zero (Mortal Kombat), Cobra Commander and Storm Shadow, Dr. Fate, several different Cat Women and I'm sure I've left off a few. 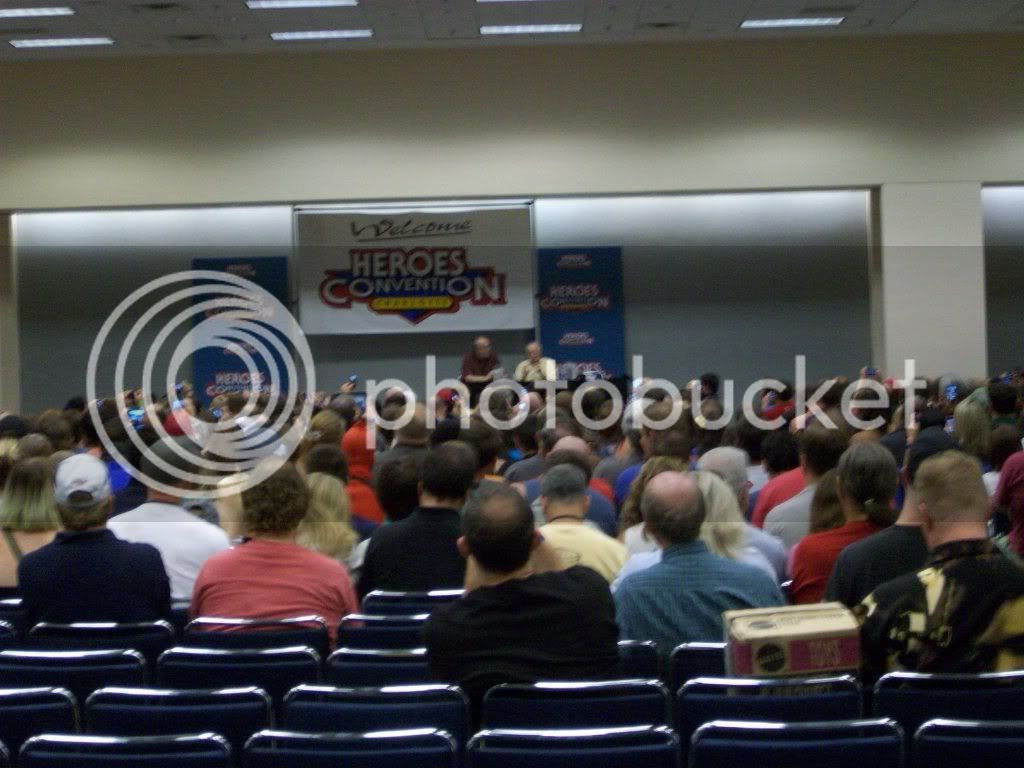 By the end of the day I was tired of the crowds so when we headed upstairs for the Stan Lee panel we purposefully sat in the very back of the room...so I apologize for the crappy picture!

The Stan Lee panel was basically a thirty minute Q&A session.  This was the first time I've seen Stan in person so it was cool, but the panel wasn't anything spectacular...at least to me.  I admire what the guy has done for comics, but I wasn't gushing over him like so many of the people that stood up to ask him a question.  I will say that Stan's wit and humor was fully intact and it made the short panel entertaining.

Two days in the books.  One day left.  I'm ready to seek out some deals tomorrow and sit in on the afternoon Marvel Comics panel.  I don't anticipate staying until the convention closes at 6 pm as my body is already feeling the effects of these last two days.  Plus I'm ready to pick up my little girls as I've missed spending time w/ them this weekend.
at 10:10 PM