A month ago (I think) I was fortunate enough to be able to pick up what the seller called junk via Yahoo! Japan auctions. I don't remember how I came across the listing, but when I translated the description the seller literally called this junk. 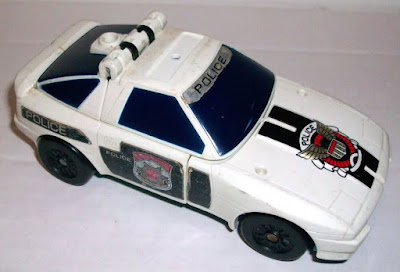 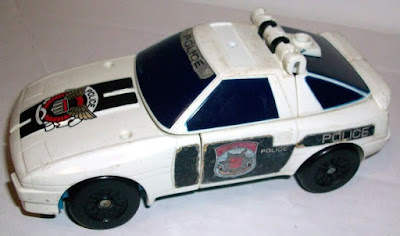 Go Shooter - from the 1988 Japanese exclusive Transformers Masterforce series. I'll take junk like this any day of the week! (I should mention the light bar was attached, but I removed it as part of the restoration process.)

Granted when I bought this item I didn't really have a good idea of it's condition. I was just so giddy when I saw that my bid ended up being the highest I quickly hit the check out button and paid. I know you're probably already wondering what I paid. Normally I wouldn't share that info, but in this case it's all part of story. How about $39? Yup, no kidding.  $39. Plus fees from the proxy bidding service I used. In the end he was still cheap. 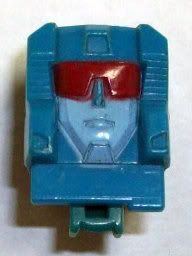 In addition to what you see I also got the seat/helmet and the Headmaster, Shuta Go. Once the toy arrived I was still excited, even though the condition was a little worse than I thought. The figure had wear to both the stickers and the plastic, especially around the roof, bumpers and the rear spoiler. What really took the wind out of my sail was when I turned him over and saw his beautiful blue plastic...was green. 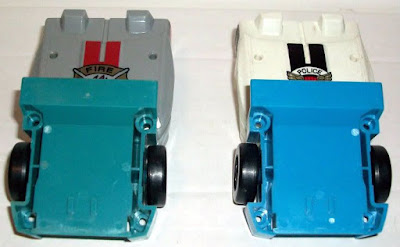 OK, it wasn't completely green. You get the picture though. I was determined to breath new life into Go Shooter and make him display worthy. I wasn't sure where to start so I bought a junker G1 Siren to experiment on since essentially the two toys were one in the same.

Upon closer inspection it appeared that all the blue plastic that doubled as the robot bits were just screwed on. Underneath the nose of the car I noticed 4 small phillips head screws so I decided to take Siren apart.  Thankfully the whole section disassembles really easy so I did the same to Go Shooter. Siren's plastic hadn't turned colors so I switched the two. Amazing the differences. The greenish plastic almost looks normal when matched with the gray plastic of Siren. 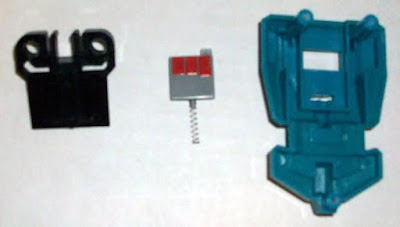 The next part I had to tackle was the chest. It was held on by 3 screws. This is too easy I began to think as I removed the screws. The black piece of plastic is where the arms/shoulder assembly attaches. I also got to see how the Headmaster tech spec gimmick works. 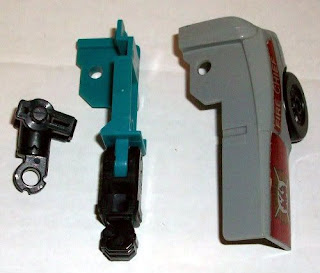 The arms were a royal pain to remove. Even though I didn't care about breaking this junker Siren figure I wanted to be able to safely remove and disassemble the arm. I didn't dare tackle this step on Go Shooter until I was comfortable. The small black piece you see acts as the shoulder assembly. On the other end of the round portion is a screw. Apparently you can tighten this screw and it has the effect of adding more resistance to the ratcheting portion of the assembly. Looks like you can do this to fix any sagging arm problem you may have with Siren or Go Shooter! 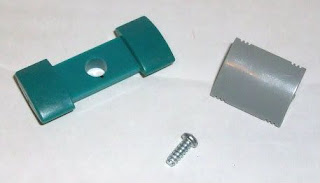 Earlier I mentioned that I removed the light bar. Underneath the cockpit was one small screw that held this piece in place. Even the blue plastic on the Go Shooter's light bar had discolored...and on my junker Siren figure. Luckily however my now naked Siren figure on my G1 shelf called out to me. No, not really. I did think to check him out a little closer however. Luck was finally on my side as the Siren I had in my collection all this time had perfect blue plastic!!

This is where I had to make a tough decision. Now I had already raided my Siren of his weapons for Go Shooter, but did I want to swap out parts of his blue plastic? Hmm. Would I rather have nice looking semi-complete Siren or a beautifully restored and complete Go Shooter? Actually it wasn't a very hard decision at all.

Now that I had all the blue plastic parts in hand and ready to reassemble the figure I could see the light at the end of the tunnel. I wasn't out of the woods yet though as I had two looming problems. 1) The small flap that covers the tech spec meter was missing and 2) The stickers needed replacing. 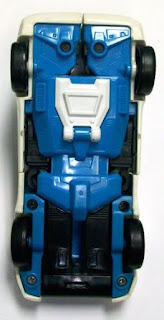 To try and remedy problem #1 I again went back to the junker Siren body and looked and looked and looked some more at this flap piece and the small metal pin that held it in place. I was at a loss of how to remove this. I posted a thread on the TFW2005 boards asking for help. I didn't get much credible help. So I kept looking. I ended up taking a small flat head screw driver and gently applied pressure to the metal pin. The more and more I slowly tried to edge it to the left I noticed it moving ever so slowly. I kept at it and after a minute or two the pin came out and the flap fell off!  Success!

Now of course Siren's body is gray while Go Shooter's body is white. Knowing I was lucky to already find a "junker" Go Shooter body I knew my chances of finding another w/ this flap attached were slim to none. That said I grabbed a can of Krylon Fusion Satin White spray paint and proceeded to paint the flap. If you've never used this Fusion paint let me tell you how great it is. Nice wide spray nozzle and dries to the touch in 15 minutes! Once it dried I added it to all the parts and proceed to put Go Shooter back together.  Sadly the flap and the pin didn't go back together as easy as it came apart, but I managed to get everything back into place. I still need to do some small touch up work to the bottom of the flap where it rubs against the chest piece. All in all though I thought it turned out wonderfully. The white turned out a nice bright white.  So bright in fact that you can tell the rest of the car has some very minor yellowing.

Problem #2 wasn't solved as easily. Unlike many G1 Transformers finding new repro labels wasn't going to be easy. To my knowledge no one had ever replicated Go Shooter's stickers...until earlier this year. The great folks that run Reprolabels gave away absolutely free exclusive sticker sheets for both Minelba (Minerva) and Go Shooter! All you had to do was register for their forums and show proof of owning either the original toys or the recent high quality KOs that had surfaced. Of course I only found out about this offer a month or so ago so that ship had sailed. I registered in the forum anyhow and began to see if by chance anyone that received the free stickers would sell me theirs. It didn't take long before someone responded to my plea and offered me up this awesome set of stickers for Go Shooter. He only wanted the set for Minelba's stickers so I quickly made an offer of $10. About a week later the stickers were all mine! 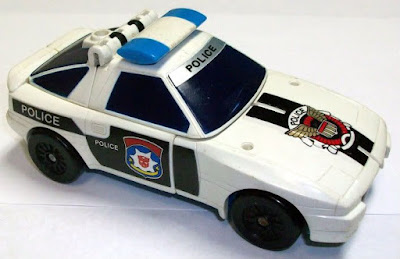 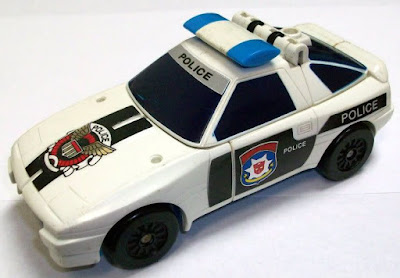 I was scared to clean the white plastic with anything but a solution of mild soap and warm water, but with a little elbow grease and some q-tips I thought he cleaned up quite nice. Add the new stickers and he was good as new. Well at least good as new for me. The police details on the hood of the car are the original. I didn't know the reprolabel sheet would contain the hood decoration, but thankfully I didn't need it. 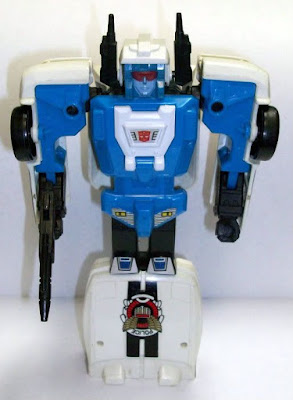 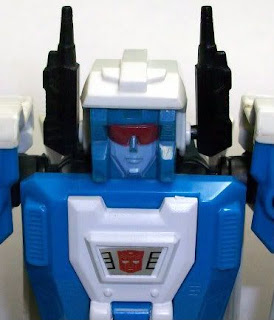