There comes a time in every collector's life when it's just time to let go. That time has come for one of my most elusive and coveted Japanese G1 Transformers...Black Zarak himself. This is post will be more like a love letter for myself to re-visit down the road than an actual review. However I will share as much of this figure as I can for everyone else's sake. Because of the fragility of this figure we'll only be looking at the robot mode. I've never transformed this figure and I wasn't going to push my luck transforming him just to take a few pictures. I hope everyone understands.

Before we look at the toy itself, let me tell a quick story of how this guy was added to my collection. It all started essentially with Botcon 2006. This was the 2nd year Fun Publications had been running the show, and my first year attending Botcon since 2004. The show that year was held in Lexington, Kentucky and I just happened to have family (sort-of) in nearby Lancaster, KY. The original plan was for my wife and I drive up to KY and stay with my mom's husband's family. However when my mom got wind of our plans they basically invited themselves and carpooled with us to KY. What fun! I just knew I was going to be "one of those guys" that had their mom in tow at the convention. After seeing the long registration / pick-up lines on Friday afternoon she decided (thankfully) not to hang around!

The silver lining to them tagging along was when I got to the convention center (Rupp Arena?) my mom bought me one of the Botcon exclusive sets - Darksyde Megatron and Darksyde Waspinator. Who would have ever guessed that a few short years later that set of two toys would be commanding such huge money on the secondary market? I wasn't looking to sell Megatron and Waspinator necessarily, but I was "shopping" them around online. This had to be maybe 2007 or 2008...I think. Anyhow I was approached by a fellow TFW2005.com member with a potential trade/cash offer for just my Darksyde Megatron. He offered me a "naked" G1 Black Zarak and $400 cash for my Megs. Knowing the GPS history of Black Zarak, I asked that he send me multiple pictures so I could look over the toy carefully. He told me that he had to repair the right foot/toe and the pictures he sent me showed that the damage was very minimal (especially when compared to what I had seen online on other Black Zaraks). I felt pretty confident that the toy was in good shape and it was a pretty good deal...if not a little lop sided in my favor. I agreed to make the trade and about a week later I received a huge box on my door step.

Of course I was literally holding my breath as I hoped the box. I wasn't sure what condition he would be in after his long trip. Thankfully he was just as described! At the end of the day I was very happy w/ the completed trade, especially when I stopped and thought that I basically received this toy for FREE! 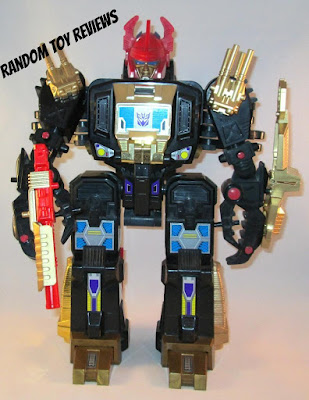 Black Zarak is a  retooled and recolored G1 Scorponok. While I think the Scorponok's green and purple works well let's face it, Black Zarak's black and gold just looks so much more intimidating. I also hated how Scorponok's Headmaster figure, Lord Zarak, was a creamy white cradled in the gray helmet. The over all look of the head was just blah in my opinion. Takara remedied this issue with the inclusion of a new red head/helmet that completely covers the attached Headmaster figure.

The rest of the figure is rather unchanged from Scorponok's release. He still retains all of the same accessories for use in both robot mode, base mode and scorpion mode. He does have one extra accessory, or shall I say weapon for use in robot mode. He features a giant red spear...but you don't see it in his hands due to it breaking a few months ago. Dang fragile plastic. It's actually my fault. For a long time he wielded the spear in his hand, however gravity played an evil trick on me. Both ends of the spear started to sag (thanks in part to their weight) and the spear ended up being bowed. Instead of using a hair dryer or boiling water to soften up the plastic first, I tried bending the spear straight. Stupid move. SNAP! If there was any consolation to this it was that the spear was actually a reproduction. Later I found out that even these hard to find repro parts were prone to breaking, especially the spear. 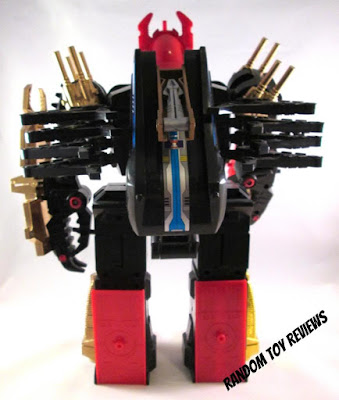 Most collectors know that this toy is riddled with GPS issues...or at least is prone to GPS issues. The gold tail section, the feet, the Headmaster figure, the gun guard, the shield/tower, radar pieces and his little partner, Black Roritchi are all susceptible to crumbling in your hands. The good part of making my own gold accessories and buying some high quality parts is that I don't have to worry about those pieces turning into gold dust. However I didn't want to take a chance with the gold pieces attached to the body, so I never transformed Black Zarak out of his robot form. 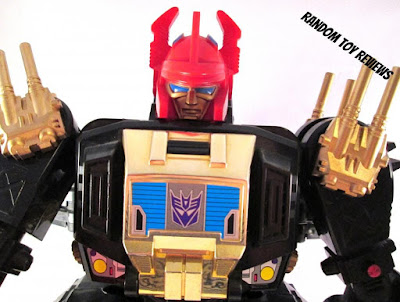 In addition to the new sculpted head, I love the gold chrome chest piece. 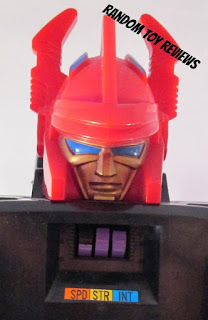 Like Scorponok and the rest of the Headmasters, the tech spec gimmick was still functional behind chest plate. I guess I should have compared and contrasted his rankings w/ Scorponok to see if they were the same or different. Hmm... 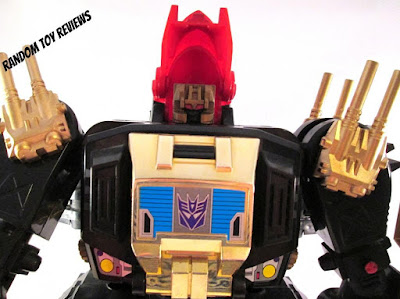 Not long after I got the "naked" body I found a different TFW2005.com member that had a vintage Zarak Headmaster figure for sale. The figure suffered greatly from GPS as his legs were missing as was one arm. I don't remember what I paid, but I wanted the figure anyway to "complete" the look. Looking straight on at the Headmaster I think it looks great. By the way, this was before that KO Headmaster set had been released. 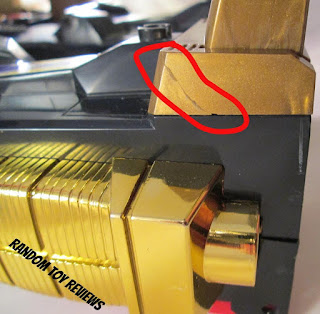 As I mentioned earlier on the figure had two places on the right foot that suffered from GPS. Funny thing is however when I went to take pictures of the two affected areas I had a hard time finding them. They are so small and insignificant they aren't easily seen unless you are specifically looking for them. Here you can see a small hair line crack on the side of the foot. This is a static piece so that crack shouldn't get any worse. 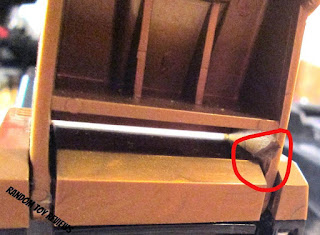 The other affected area was underneath the foot on the right hinge. You can see a small piece of the gold plastic is missing, however it doesn't affect the foot, the figure's stability or the transformation. I've seen far worse cases of GPS on this figure so I count myself fortunate that this is all my figure suffers from. 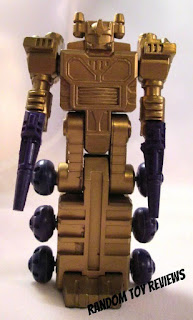 Where as Scorponok has a little partner called Fasttrack, Black Zarak's partner is called Black Roritchi. The entire figure is cast in gold plastic and is extremely fragile. Mine is a high quality reproduction so at least I could transform him without having any regrets. His wheels and guns are a deep purple and looks good against the gold. 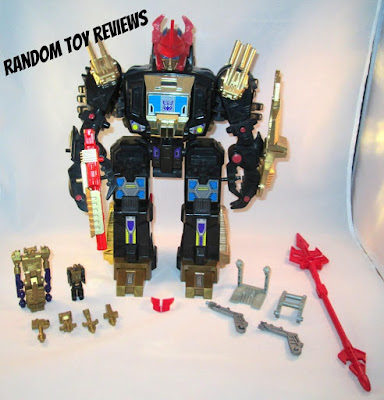 Long before I knew of TFW2005.com member Darkov and his great TF repro parts, I scoured eBay and other sites online looking for more parts for Black Zarak. I ended up buying one of his gold chrome leg guards, both pieces of the silver elevator and both silver repair bay arms from a very respectable TF collector/dealer. I never could find the other parts I needed so I set out to make my own. Using Scorponok's gun, gun guard, shield and 4 shoulder cannons, I proceeded to paint them gold. While the gold isn't an exact one for one with the original gold parts, it's very close and looks good...in my opinion at least. Later on I discovered the parts Darkov was selling and I bought Black Roritchi, the red visor piece, the red spear and all 4 of the gold radar things. In retrospect I wished I had bought the whole kit, but even these parts were understandably expensive.

So why am I selling him? That is the question I've been asked a lot lately. Well there are several reasons why and in no particular order here they are.

1) There is a KO Scorponok on the horizons and that means a KO Black Zarak may not be far behind. With rare/expensive toys (especially when they are fragile) a lot of collectors will settle with a KO. Just look at how many people buying all of these new Masterpiece KOs of Lambor, Tigertrack and now Grimlock coming up. I just figured now was the best time to try and move him before and if a KO is ever released.

2) I've heard there is a very good released that Scorponok is also slated to appear in Takara Tomy's Encore line of re-issues sometime in the near future. Of course that makes Black Zarak fair game for a proper re-issue as well. I usually would prefer to own an original over a re-issue any day of the week, but in this case I think it would be the opposite for me and many others. I'm basically afraid to touch Black Zarak. This makes it hard to enjoy the toy. If he was re-issued the GPS issues would most likely no longer be an issue and this alone would be a huge draw to buying the re-issue.

3) A change of my collecting scope. It's so easy to get caught up w/ trying to keep up with other collectors, especially in this day and age of database sites like Shmax and with social media. I no longer wish to "compete". I also would rather have a collection full of quality toys I can enjoy, rather than have a collection of toys that is more focused on quantity.

4) What collector out there hasn't had to sell some of their items (or even their whole collection) when real world issues arise? I'm not made of money and with my wife not working it puts a lot of stress on me to provide for my family. I've very fortunate and blessed to have what I have, but I'll never put a TF or anything else in front of my family's well being. That said I have a few bills I need to pay off and this is the easiest way for me to accomplish that task.

Truth be told I thought this would be a hard decision to make, but in all truthfulness it has been a rather easy choice to make. One of the best parts of having this blog is being able to re-visit at different points and look back on my own hobby life. I'm proud to have owned this spectacular piece for the time that I have, but like all good things in life the end is here.
at 12:20 PM