As much as I love Transformers, I also love toys in general.  One of the things about having this blog that I enjoy so much is using it as an excuse to see what else is out there that I might have missed from my childhood days.  After all I really had my blinders on as I was fixated on Transformers and to a lesser degree, G.I. Joe.

While I'm not made of money, I have grabbed a few toys here and there for the explicit purpose of this blog.  I have no desire to start up a new collection or anything, but from time to time I like to deviate from Transformers.  This is one of those posts.

To preface this post, I know very little of the topic - Bucky O'Hare.  I vaguely remember seeing the comics on the rack and I knew there was a 8-bit Nintendo game released towards the end of the NES' life.  Outside of that I'm going in blind! 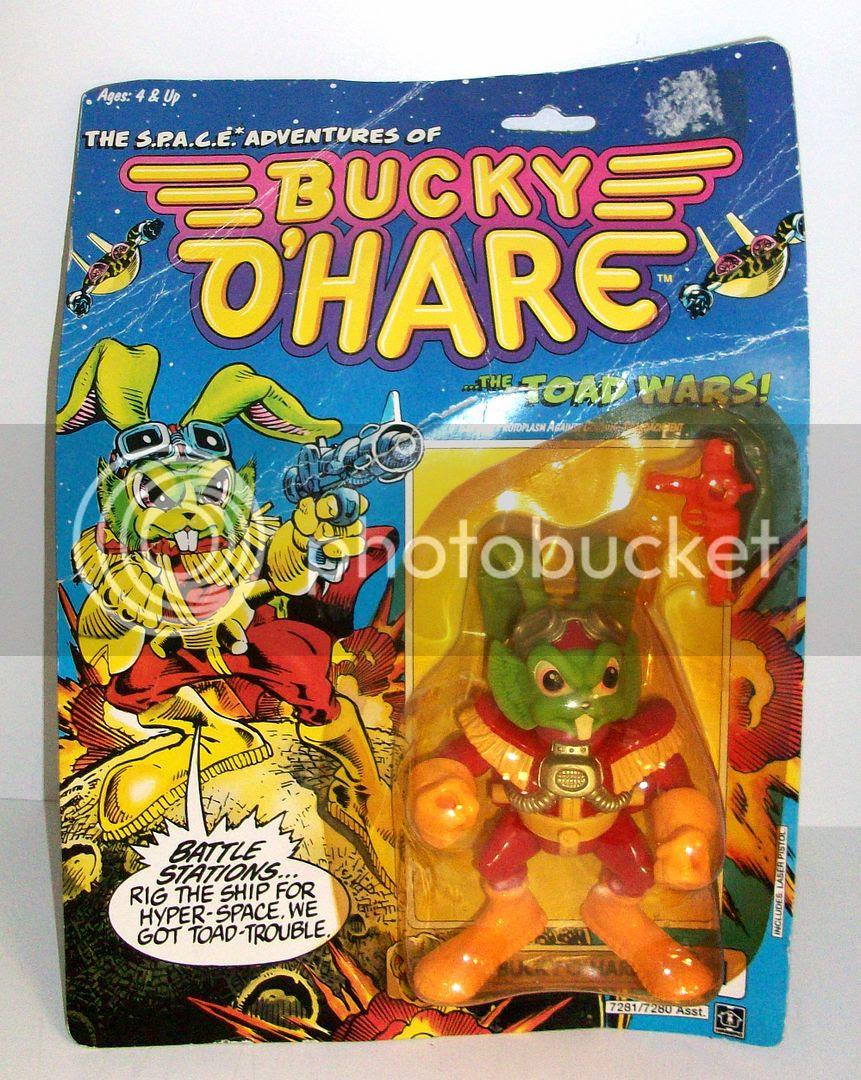 I grabbed this sealed Bucky O'Hare online for just a few bucks.  Once it finally came in the mail I can see why I got it so cheap.  Of course the blister bubble is horribly yellowed, but the card is all warped and bent as well.  Since I planned on opening him from day one I could have cared less for the packaging's condition.  I didn't want to settle for just a loose specimen though.  I like toy packaging and to me it's a part of the toy.  Besides, check out the great art work of Bucky.  I love how the packaging's front looks like it was ripped right out of the comic book.

Released in 1990 by Hasbro, the Bucky O'Hare line of action figures reminds me a lot of the old Teenage Mutant Ninja Turtles.  Crazy animal creatures battling each other...this time in space instead of underneath the streets of New York. 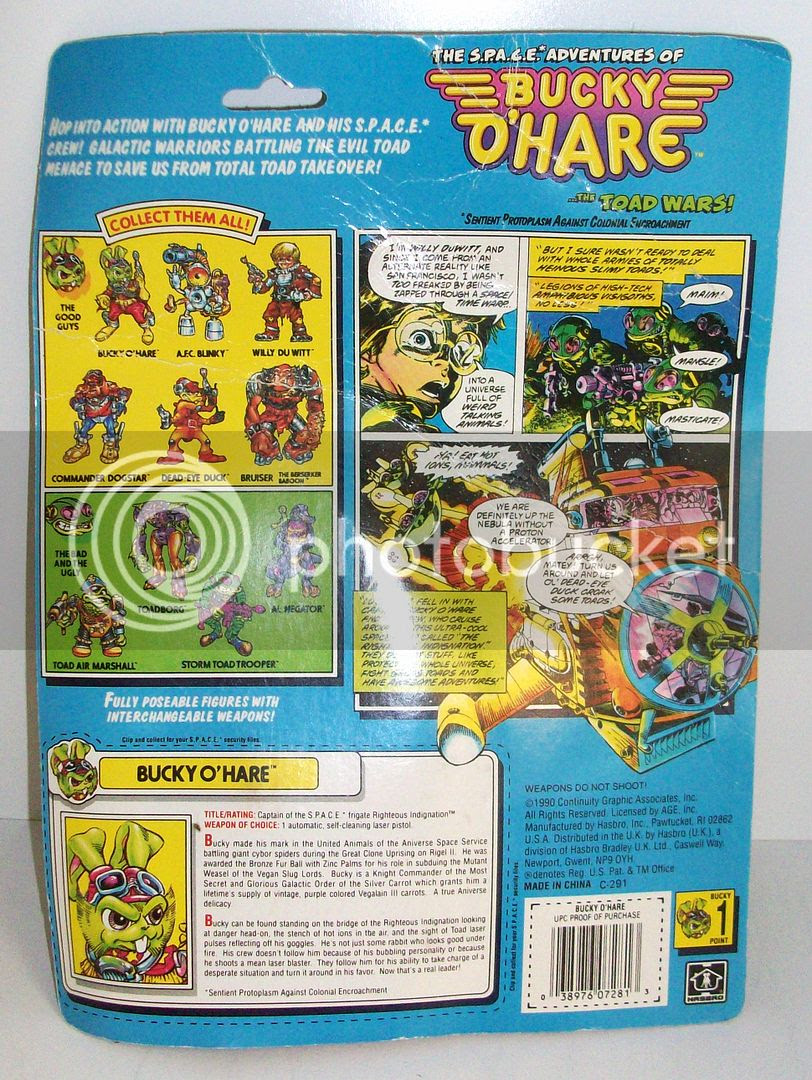 The back of the package has the obligatory cross sell showing off the other figures then available at retail.  I believe these 10 figures shown were the only ones released as the toy line had a very short lifespan.  What I find interesting is the little comic on the right side. Beneath the images is a little S.P.A.C.E. security file card you can clip and collect.  During a little research I found that the Bucky O'Hare character and world was created by Larry Hama!  Yes, the same guy that wrote the Marvel G.I. Joe comic and file cards for all the ARAH toys.  I wonder if he wrote these file cards too?  The artwork supplied was by none other than Michael Golden.  That's why the art looked so familiar to me. 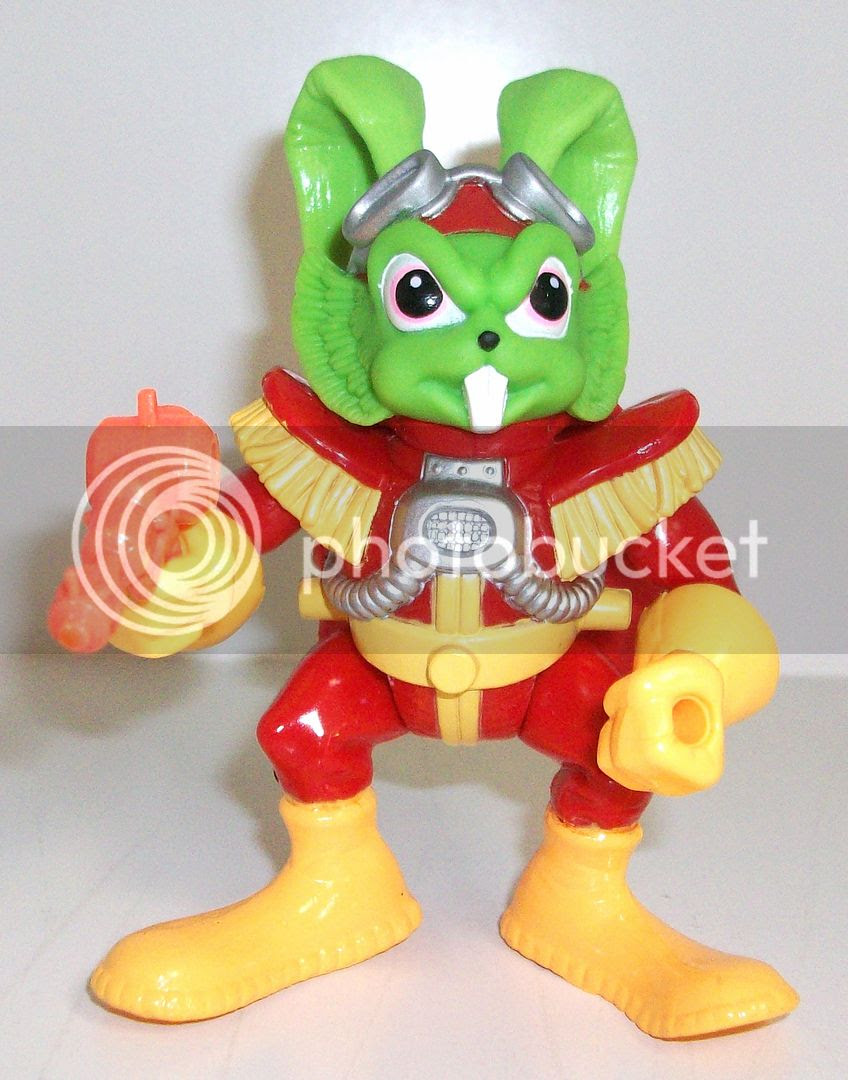 Out of the package I was surprised at just how brightly colored Bucky truly is.  He's also a lot smaller than I thought he would be.  I apologize for no comparison pictures, but at the time I snapped the photos I didn't have anything nearby to compare him against.

Despite the packaging calling these "fully poseable" figures, they really aren't that articulated.  Then again I guess for a figure from the early 90's this was considered fully poseable.  The arms & legs move back and forth a bit, but the molding of the toy prevents a full 360 degree rotation.  His wrists swivel a full 360 though.  Weapons are interchangeable between the different figures in the line.

I can honestly say this toy has intrigued me enough to seek out some of the old comics and maybe even the NES game.  Knowing Larry Hama was behind it makes me want to read the various stories.  From a toy perspective Hasbro did a good job with these.  As I mentioned earlier, the toy line is rather small and would be somewhat easy to collect - loose or packaged.  I've got a few more Bucky O'Hare posts for later if you enjoyed this one.  If not, just sit back and wait as I'm sure there is another Transformers review on the horizon!
at 12:00 PM