This has been a post I've wanted to bring to the blog for a very long time, but I've always been a little hesitant handling the toy(s). Over the next week or so I'll be sharing one of the most prized items in my Transformers collection, the entire Dinoforce team! 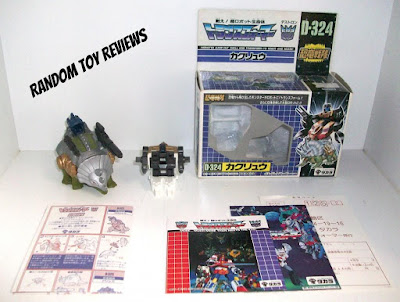 Early on one of the collecting goals I had set for myself was to collecting the various combiner teams, but not just loose and complete. I upped the challenge and wanted to collect the Japanese versions of all the combiners, including the exclusives. Now one may say I was crazy for giving myself such a lofty goal and I partially agree, but part of the fun of collecting is the thrill of the hunt. If someone has enough money they can easily purchase one of the combiner gift sets and be done with it. I wanted the characters individually packaged. 1) I like the look of the entire team together, individually packaged. 2) The chase to complete the team just feels more satisfying.

Thankfully I started this endeavor of mine many, many years ago when prices on the secondary market for Transformers in general weren't that crazy. In fact I pieced together my Dinoforce set for just under $600! Try accomplishing that feat in today's market!

In no particular order, we're starting off w/ Kakuryu. According to TFWiki, Kakuryu is easily the dumbest of the Dinoforce team. His U.S. equivalent is the Monster Pretender, Slog. Kakuryu is packaged with Dinoking's head and rifle, the Dino Blaster. 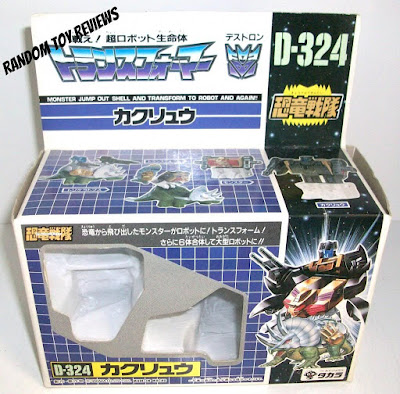 You'll have to excuse me for not re-packaging Kakuryu before taking the pictures. The less I handle the figure and the dinosaur the shell, the better I can rest! The box features a very familiar layout, though the addition of the space like stars in the black vertical stripe is a nice new touch. Unlike with the Scramble City combiners, the inner tray is made of a thin white plastic versus the familiar and more favored styrofoam. There is also a narrow small piece of plastic that is taped down over the tray to help hold the toys in place.  This piece is often yellowed. While I didn't photograph this piece, I do have it and thankfully is not yellowed. 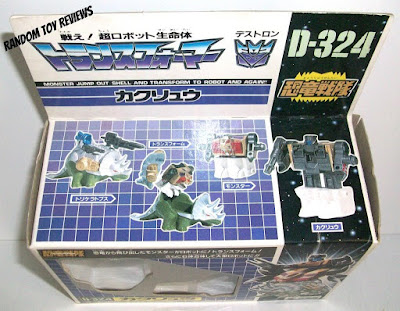 The top of the box features a simplistic transformation sequence. According to the box, the inner robot is still a monster. 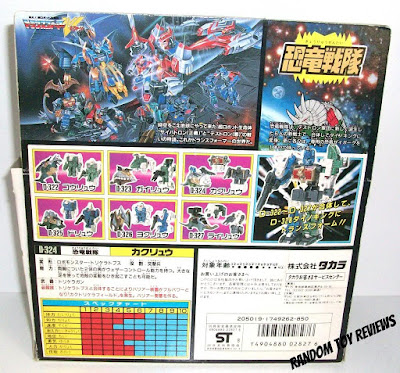 The back of the little box is kind of busy if you ask me. You've got the awesome Victory battle scene art, animation style art of Kakuryu's Pretender shell, all 6 Dinoforce members including Dinoking and his tech spec. 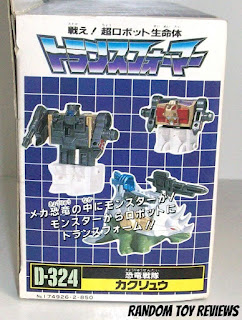 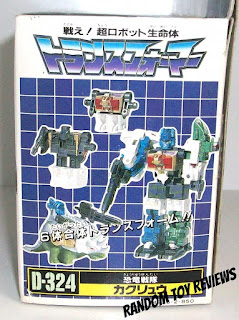 The often overlooked bottom of the box features a nice large image of Kakuryu's Pretender shell. Worth the price of admission alone! 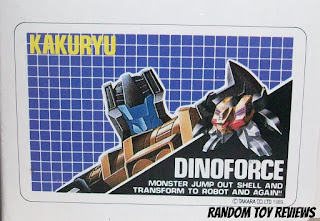 I love the earlier Japanese releases that featured the tech specs as a small trading card. Towards the end of the G1 series in Japan the cards were moved to the inner box flaps. The "cards" were actually printed one sided, meaning you had to cut the tape on each end of the box if you wanted to remove them. 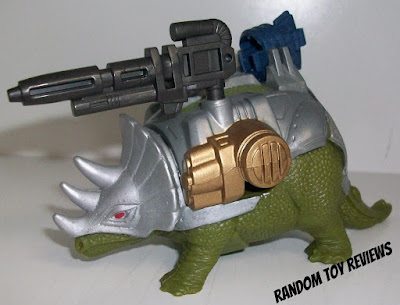 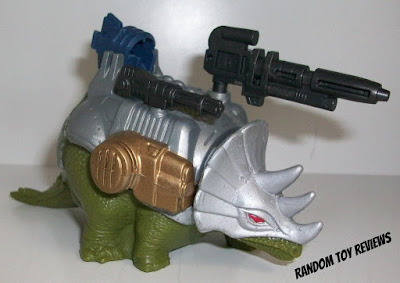 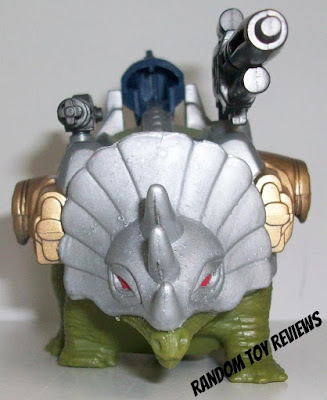 I've always thought the Dinoforce Pretender shells just screamed Dino-Riders. I guess it's all the armor plating that covers the dinosaur. Just like the U.S. Monster Pretenders, these shells are made of a rubbery plastic with a hard plastic shell that covers and conceals the robot inside. The problem with these shells, both U.S. and Japanese, is that it seems there is a chemical breakdown of sorts happening which leaves the shells very slimy to the touch. This is one of the main reasons that I don't like to handle the toy much. The shells also feature some gold paint applications that were applied directly to the rubbery plastic. This paint is much more prone to wearing off as opposed to the paint on the hard plastic armor bits.

Probably one of my favorite aspects of the shells is the fact that they can hold all of the accessories. Not just the individual robot's weapons, but Dinoking's combiner parts as well. I'm betting this helped a lot of Japanese kids from loosing the small guns and parts. 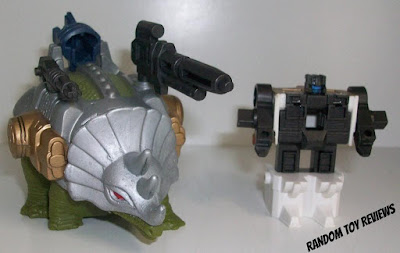 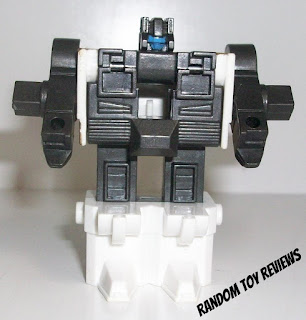 Kakuryu is small and blockish, but the black and white fits the mold nicely. The blue on the face really helps draw in your attention to an otherwise lackluster robot. Kakuryu forms the upper torso of Dinoking. 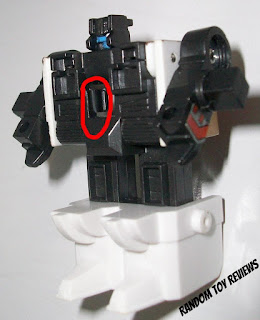 Another fear of mine was realized when I disassembled Dinoking for this series of reviews.I've circled in red what I discovered that nearly made a grown man cry. There are two tabs in Kakuryu's chest that are utilized in combining to form Dinoking. As you can see the left tab has a major stress mark. For this reason alone I urge you caution when combining or disassembling Dinoking...or even Monstructor. I know I won't be messing around with him anymore! 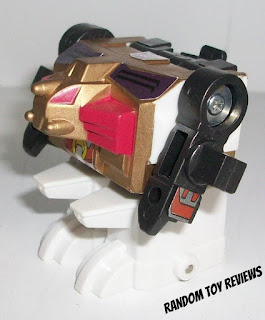 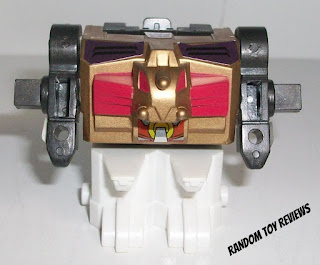 Just like with the U.S. Monster Pretenders, the Dinoforce robots feature a monster like alternate mode.  That's the best description I can come up with!

I do want to dispel a rumor or myth about Kakuryu. Unlike his U.S. equivalent, Slog, Kakuryu does NOT feature any gold plastic. Of course this is welcome news since most collectors are more than aware of Gold Plastic Syndrome (GPS). This toy is molded in black plastic, then parts of the mold painted a metallic gold. 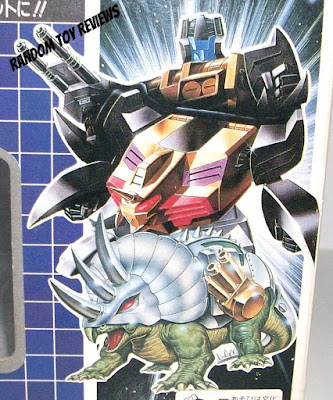 I can't say I really have a favorite Dinoforce toy as they all are really cool. Simplistic, yes, but that is where the dinosaur Pretender shells come in to play. These toys don't come cheap anymore and as individual toys you may even find it a little underwhelming, but once joined with the other members and Dinoking is assembled there is great fun to be had!

Fun fact: Kakuryu did eventually join the Autobot cause as a Dinobot. He even participated in the Power Core Combiner program and was given his own squad to command as Grimmaster!
at 3:39 PM