I haven't been excited about new G.I. Joe toys in quite sometime after the 25th Anniversary line dwindled and the Rise of Cobra movie line was lackluster at best...and then I saw pictures several months back of the new Pursuit of Cobra H.I.S.S. tank.  I'm pleased to bring you a review of one of my favorite Cobra vehicles of all time. 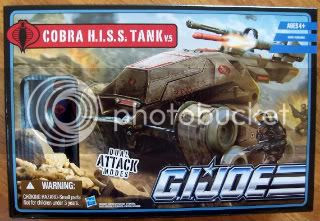 I've you've been reading my blog since I started it earlier this year then it should come to you as no surprise that I'm a big fan of how toys are packaged.  Right off the bat I've got to say Hasbro has hit a home run.  The art work is beautiful.  From the G.I. Joe logo to art of the H.I.S.S. tank...simply stunning.

The top of the box features a smaller rendition of the same art work found on the front of the box.

Bottom of the box features the driver's file card. 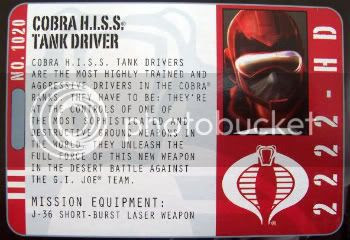 I love the new look of the file cards.  I would imagine if you were skilled with an exact-o knife you could cut out the cards and even laminate them to make them look "official". 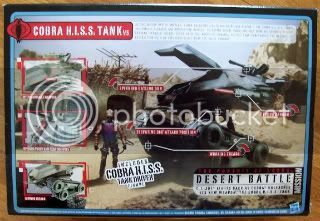 Back of the box shows off the toy features.  Also note in the bottom right corner - this vehicle is part of the desert battle sub-theme.  Each figure/vehicle is part of a different theme as the concept features the Joes chasing Cobra and their forces all over the globe.

Here's the desert battle story for the H.I.S.S. 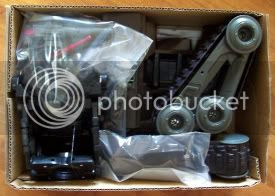 I believe one of the biggest announcements regarding the new line of G.I. Joe toys was that the vehicles would come partially un-assembled!  One of the biggest draws to the old A Real American Hero vehicles was the fact you got to build the vehicle yourselves similar to a model kit.  Here is the insert tray with all the parts. 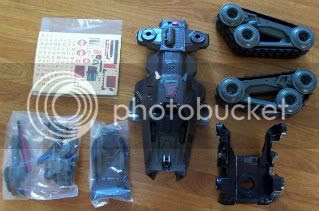 Here are all the parts laid out.  You've got the main portion, elevated harness, tank tread assembles with rubber treads, cockpit cover, bag full of smaller weapons and accessories and a bag with the instructions and sticker sheet.  Let me go ahead and mention one thing that I was a little disappointed with once I took all the pieces out.  The body of the H.I.S.S. tank is NOT black!  Come on Hasbro.  We all know the H.I.S.S. tank should be black and looks best in black.  This new version is a dark brownish color.  From a distance (and in some of my pictures) it does look black so it's not a horrible color - I was just surprised that it wasn't the classic color. Also the cockpit doesn't have any translucent parts so don't ask me how the driver sees out the cockpit of the vehicle! 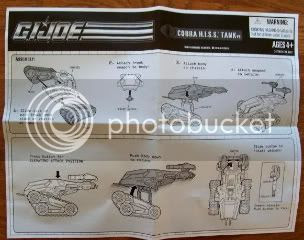 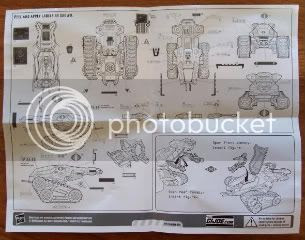 The instructions are black & white and do a good job showing you how to assemble the vehicle and apply the numerous stickers. 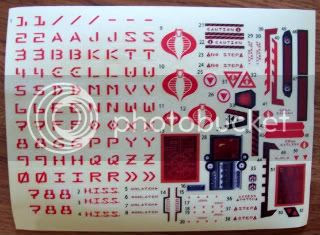 Yes - that is a lot of stickers!  Notice all of the letters and numbers on the left side of the sheet?  Those are used to customize your new H.I.S.S. tank.  Nice touch Hasbro. 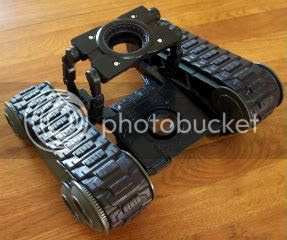 Assembly is rather easy.  Each tread simply attaches to the elevated harness on each side. 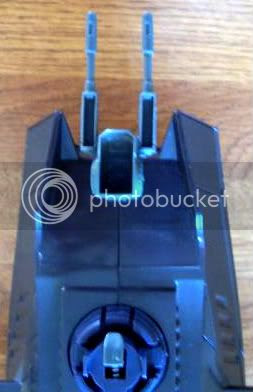 Next you take the small double barrel machine gun and snap it into the hole of the underside of the tank's front portion. 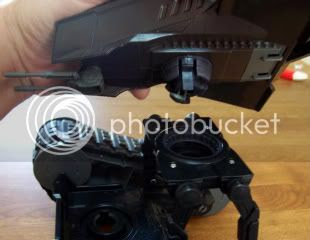 Take the upper portion of the tank and snap it into the circle of the elevated harness.  This will allow the upper part of the tank to rotate a full 360 degrees. 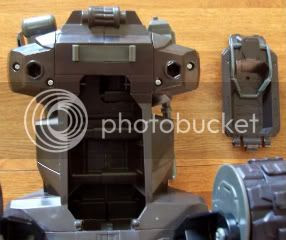 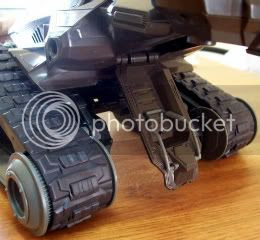 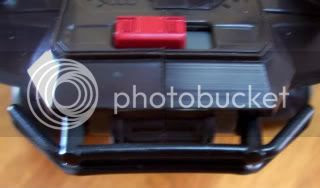 There is a small roll bar that attaches to the back of the tank.  The red button when moved from left to right will rotate the cannons that attach on the top. 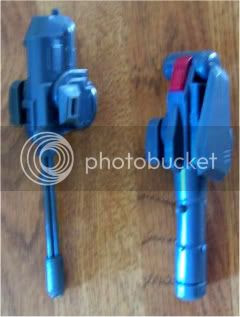 Here are the aforementioned guns.  The missile launcher on the right is spring loaded and fires red missiles.  There is a small belt of bullets for the machine gun that fits into one side of the gun and the tank. 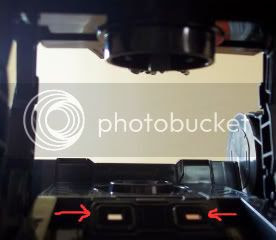 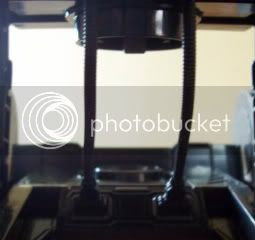 With the tank raised the next step is to attach two rubber hoses.  I've marked the bottom notches in the left picture where the hoses attach.  This gives it a nice look when elevated. 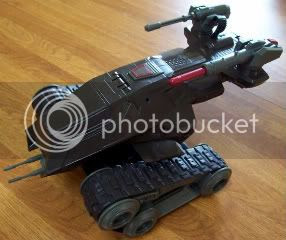 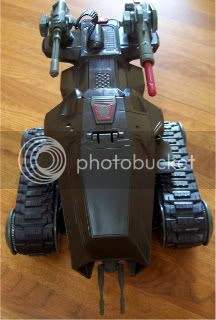 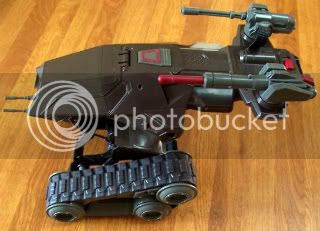 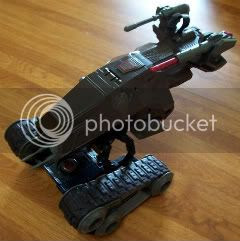 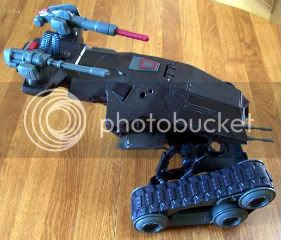 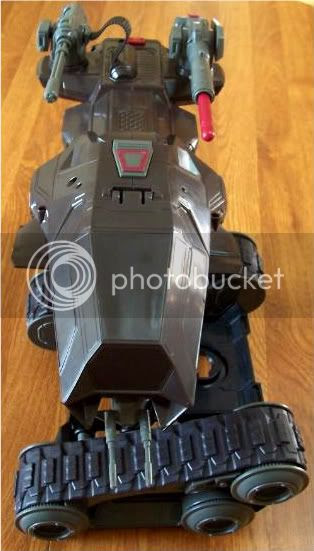 When the center button on the top is depressed the tank is elevated.  The top portion can rotate a full 360 degrees allowing good poses and a fun way for kids to play.

Now let's take a look at the included H.I.S.S. Tank Driver.  The figure features the iconic head of the driver we all know (and love?).  There are a few things that long time collectors will notice right away.  First off the figure is sporting a maroon color instead of the classic bright red.  The other change is the chest harness.  I believe this is the same harness that came with the Resolute Destro figure in the 25th Anniversary comic packs.  The rest of the figure's construction differs from the most recent H.I.S.S. Tank driver which was a nice touch.  This is a very nice looking figure. 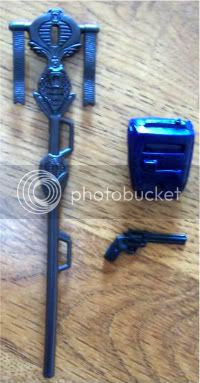 A lot vehicle figures in the old A Real American Hero line didn't come the weapons or accessories.  If they did it was a small hand gun or knife.  Rarely did they come with any substantial gear.  I say that to say I was surprised when I opened the part bag and 3 accessories fell out for the figure.  You get a small backpack, hand gun and a staff.  I personally find the staff an odd fit for a tank driver, but I'll take it. 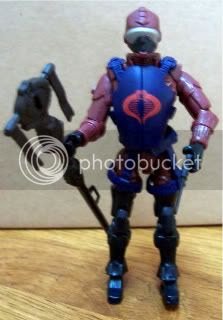 H.I.S.S. Tank driver all geared up. 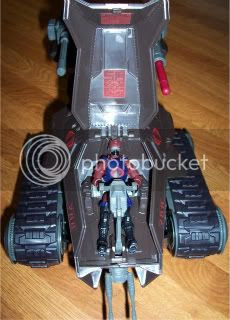 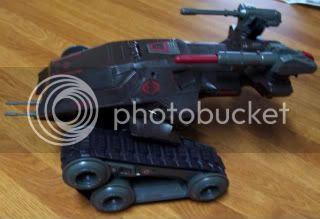 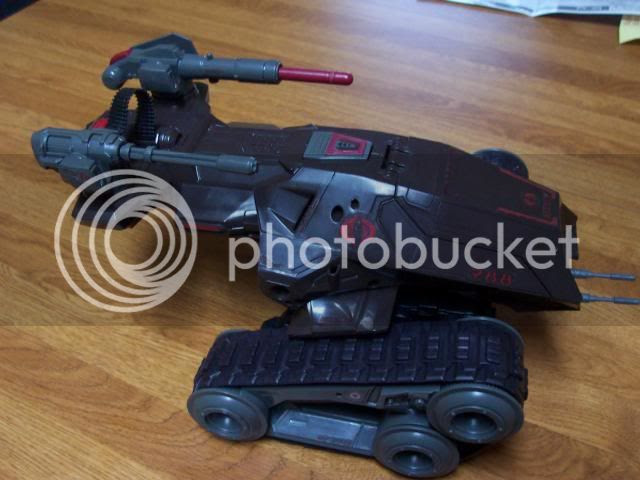 As I mentioned earlier in the review it comes with a rather large sticker sheet full of stickers printed on a clear background.  Most of them were easy to apply, but in typical G.I. Joe fashion a lot of the stickers are very small and when applied in certain places are very hard to see.  I ended up applying all of them, but some of them are so small I questioned why I even bothered once I was done.  I went ahead and used the classic 788 stickers, but you can creature your own vehicle designation using the supplied letters and numbers.  Once all stickered up the tank looks rather good.  I'm so glad the Cobra emblems are red and not white or silver. 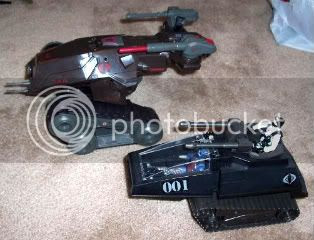 Finally we have a comparison with the iconic H.I.S.S. tank (25th Anniversary version).  As you can see it's larger, longer and wider versus the classic version.  This is a fantastic update of the vehicle and one of my favorite Cobra vehicles released in some time.  Like a lot of collectors I don't have a lot of room for bulky vehicles, but this is a must for a Cobra collector.  It's different, yet has a nostalgic feel.  Prices at $20.00 I feel you get a good value for your dollar and I highly recommend this toy.