In full disclosure I've been sitting on the edited images for this post for awhile. I had hoped to have it ready for the movie's premiere, but between vacation and trying to get caught up with work it just didn't happen. None the less, here were are with our first look at a few Jurassic World Dominion toys to be featured on the blog. It seems fitting with start off with THE beast, T-Rex himself. 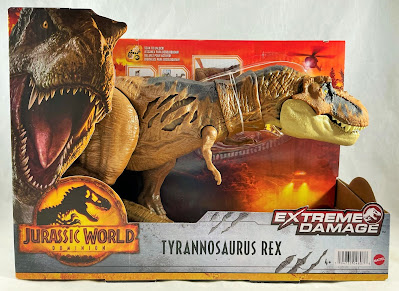 In light of a lot of companies being more conscience about the amount of plastic being used in their packaging, Mattel opted to go with a windowless box where most of the toy is displayed. I'm not overly crazy about this...I guess I don't like the idea of people "handling" the figure I'm about to buy. However it is a lot nicer than closed box packaging that is also becoming the norm in certain toy lines.
The Extreme Damage subline isn't new to the Jurassic Park/World toys and since it has a gimmick the open packaging makes a little more sense. In the packaging you have access to the button that flips the damage on the dinosaur. There is also a few small diagrams at the top of the packaging showing how this play gimmick works.
The packaging itself features a large image of a T-Rex on the left side, while the background has a cool landscape, complete with a helicopter depicted in the sky flying over our toy dinosaur. Underneath the large dino head is the new JW Dominion logo, complete with the dinosaur's name across the bottom. Just above the name on the right side is the Extreme Damage logo. I believe this is the same logo Mattel has used before in previous lines. Flip the packaging around to the back and you're greeted with a large product image of the dinosaur, along with how the Extreme Damage gimmick works again. On the left side is a section that talks about the embedded DNA chip (QR code essentially) and how it works with the new Jurassic World app. I had planned to share some screen shots of the app and how it works, but decided to focus on the toy itself. The app is free to download and with the open packaging you can scan most of these DNA chips and interact w/ the app without having to spend any money. The bottom left corner does showcase some of the additional dinosaurs offered in the Extreme Damage subline. 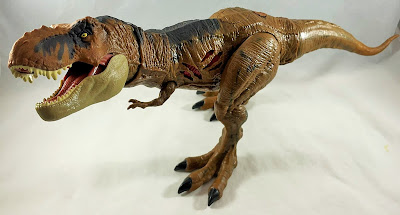 Upon removing the dino from it's cardboard prison there is a bit of assembly involved. The tail has to be attached to the rear of the dino which is easy as it simply plugs and snaps into place. From head to tail he measures approximately 19 inches long. With his overall length I did have some difficulty fitting this guy in my light box without having the side seams of the background exposed. There are much larger versions of the T-Rex toy, but this one is a good size and more budget friendly in my opinion.
The majority of the figure is cast in brown plastic. Additional paint apps bring the figure to life however, such as the splotches of black used on the face (around the eyes) and down the neck and back of the figure. The lower jaw I believe was made of a lighter color plastic and not painted, however the molded tongue and teeth have been painted as well. Finally his claws on his large feet have also been painted black. Mattel isn't new to making dinosaur toys so by now they've nearly perfected the molded details such as the way the skin looks. They did a good job at capturing a leather look while also having reptilian features. It's been awhile since I've handled a Jurassic Park/World toy of this size and I have to say I am impressed.
From an articulation standpoint, I counted 10 points. On the head, only the upper jaw moves. There are two neck joints that allow the head great pose ability. Both arms have have a ball & socket joint and move freely. The legs move at the hips and the feet have a cut just above the ankle. The tail has just one joint and that is where it connects to the body. 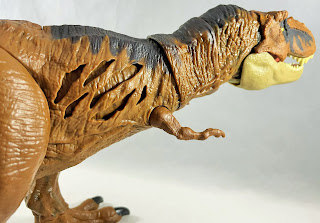 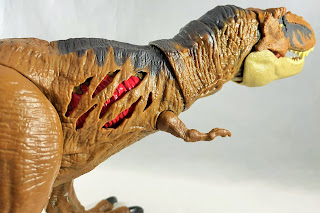 Located on the top, right above the hips is a small integrated button. This is what triggers the Extreme Damage gimmick...basically revealing torn, red flesh through the exposed sections of the skin. These exposed sections appear on both sides of the T-Rex, though each side has different shapes for the tears. Upon pressing the button, a section "rolls" back and forth between normal skin and the bloody skin. I don't know why I find this little gimmick so amusing, but I do.
Overall I think this is a great representation and fun toy of the Tyrannosaurus Rex we all know and love. Kids will like the Extreme Damage gimmick as well. It's got some great molded detail and some good paint apps. I am a little disappointed that some of the black detail on the back doesn't carry over to the tail more. Also it would have been nice for the claws on his tiny hands to be painted. There is also one claw on the inside of each foot that escaped paint. He also scales pretty well with some of the other figures in the line. Otherwise this is a really fun toy and at basically $20 it won't break most people's budgets. If you're looking for something bigger however, check out the $60 priced Super Colossal version. 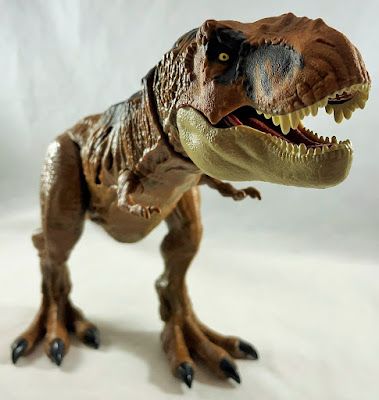 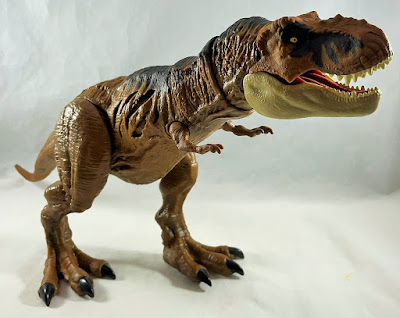 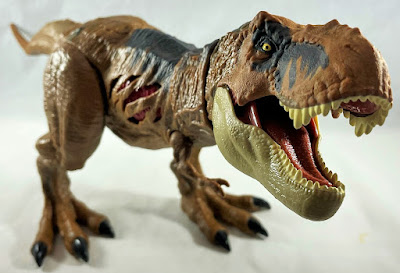