When the Masters of the Universe: Eternia Minis first debuted, they came blind packaged in small plastic Castle Grayskull packaging. Wave 2 used Snake Mountain packaging, but all subsequent waves moved to a more traditional (small) blister card packaging.
Wave 3 was released in 2021 and consisted for 7 figures. The two that I didn't purchase were the black/red repaints of Ram Man and Teela, released as "Anti-Eternia" versions of themselves. I wasn't too keen on these so I passed them up. 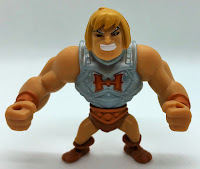 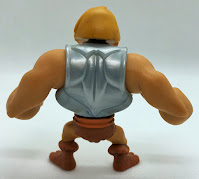 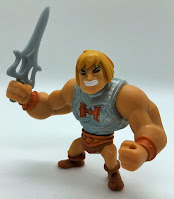 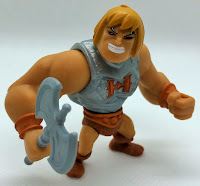 We'll start off with Battle Armor He-man. Like with most of the variants to He-Man in other MOTU lines, this mini version is basically the same as the original version sans the battle armor. He comes packaged with the same Power Sword and battle axe as before. The molded piece of armor is quite detailed and features the familiar logo on the chest, however this version (obviously) doesn't have the same battle damage gimmick as say the original 80's figure or even the deluxe Origins figure. 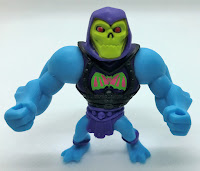 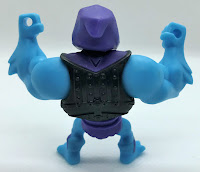 Like with the above He-Man, Battle Armor Skeletor is also pretty much the same figure from wave 1, just with the addition of his black armor. He comes with his part of the Power Sword and his iconic Havoc staff. The pink w/ green outline bat symbol is present on the armor chest piece. 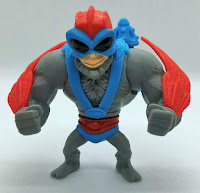 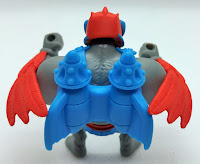 Stratos looks like...well a smaller version of himself. The little figure has a fair amount of detail, complete with his beard and hairy chest. Sadly his soft plastic wings were warped inside the blister bubble, but if you're an action figure collector then you know how to straighten out soft plastic accessories as such. This non-removable jet pack looks fantastic and helps complete Stratos' look. 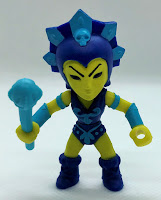 Harkening back to the original 80's toy line, Evil-Lyn has her pale yellow skin hue. I prefer her appearance in the 200x show/toy line, but overall I don't really care. This figure is probably one of my least favorites in the Eternia Mini series. It's a dainty figure overall, but I think it's her face sculpt that keeps this figure from standing on the same level as others. Unless you're a huge Evil-Lyn fan, this one is an easy pass. 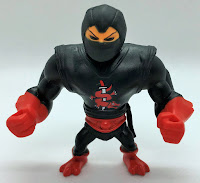 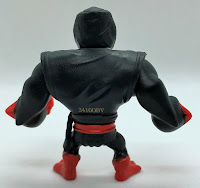 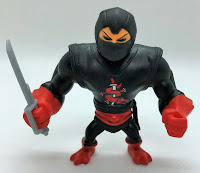 Growing up my main exposure to Masters of the Universe was through my older brother and our oldest cousin, so a character like Ninjor is practically new to me. I love the character and his look, so I was happy to see him added to the Eternia Mini ranks. He sports the same overall design as his 80's or Origins counterpart, which is a black garb with red gloves and boots. He comes packaged with a simple gray sword that he can easily wield in either hand.
I'm one that loves to display my toys, even though rarely does anyone outside my immediate family see my collection. That said, space is always at a premium so these small figures are awesome as they retain the look of their larger brethren, but take up way less space in your collection. I'm glad Mattel moved away from the blind packaging (even though they were coded) because as I mentioned earlier, I opted to skip on a few of the releases and being blister packaged made it easy to do so. This series would go on for a few more waves, even adding in small vehicles and adopting whatever the current animated show was. Perhaps I'll get to some of those in the near future? 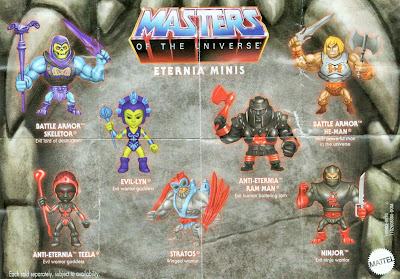 Email ThisBlogThis!Share to TwitterShare to FacebookShare to Pinterest
Labels: Eternia Minis, Masters of the Universe