Ah, Beast Wars...the segment of the Transformers brand that literally saved the brand from fading out of existence, at least at retail. Being released after the failed attempt of the Generation 2, the Transformers got a face lift and injected new blood into the brand. Gone were vehicles, replaced with dinosaurs and other animals. The line was a hit, especially with younger kids and created a whole new era of fans. However how would the "Geewuners" like myself react to the line? Would they embrace it? Hate it? Or just be indifferent? Stick around as I walk down memory lane with the latest line of reissues from Hasbro, celebrating 20 years of Beast Wars. 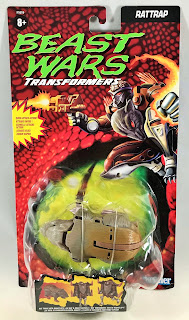 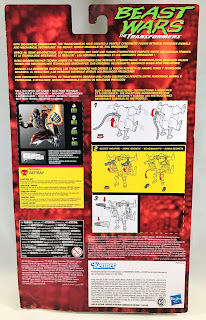 The tread of what is old is new again is played out again in the Transformers brand with the latest relaunch of the Beast Wars brand. Exclusive to Walmart stores in the US, the first wave featured 4 toys:  the "Ultra" class Optimus Primal and Megatron, "Deluxe" Cheetor and "Basic" Rattrap.
The line seems to have been met with mix reactions and ho-hum sales. The first wave seemed to warm the shelves pretty good in my neck of the woods with all of them eventually hitting clearance, some deeper discounted than others. I actually paid full price ($24.99) for Rattrap, but eventually would find him at local retail on deep clearance ($7). I liked the spring loaded transformation gimmick of the early Basic size Beast Wars toy and Rattrap is a character you must own if you are building out your Maximal ranks.
Hasbro chose to mimic some of the early Beast Wars packaging w/ the rocky type shaped blister bubble. Kenner would later phase this blister out and go with a smooth bubble. The card back reuses the red reptilian scales with the large classic green eye behind the toy itself. Even the classic Beast Wars logo remains at the top of the blister card. 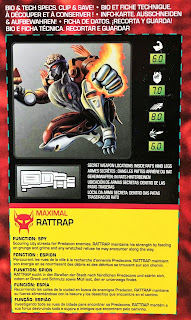 Flip the blister card over and this is where we have some obvious changes to the original. Like with most modern Hasbro toys, multiple languages have been shoehorned onto the packaging. So much so that we've lost his original Bio...which is a real shame because as a kid this is how I determined how their character would be when pulling out my toys and playing on the floor of my bedroom or in the living room. The category stats have also been reduced from 8 categories to just 4, however the individual rankings of these categories remain the same.

As mentioned above, I was a fan of the early wave of Basic sized Beast Wars figures for many reasons. 1) The original price point of $5 was friendly on my high school senior wallet. 2) The designs, while a little more simplified than the Deluxes were still fun. 3) No complex transformations - just left a lever (or tail in this case) and instantly you have your robot mode.
Hasbro did a good job capturing the deco of the original toy. While I don't have an original any longer to compare it to, this figure is mostly how I remember in terms of paint applications. the feet look a little more like a pastel pink than I recall. The figure seems solid with good strong plastic. Outside of a copyright mark on the mold, I'd be hard pressed that many would be able to tell the difference between this reissue and the original. 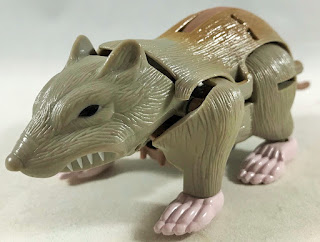 The only real drawback I've found with this toy, and it seems to be the case with others that I've seen reviewed, is that the front legs don't hold together well. You can see in the image above the rather large gap just behind the neck. It's not a deal breaker, but still a little disappointing. 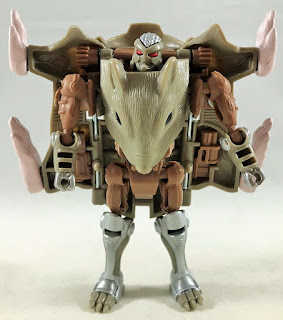 Transformation from rat to robot is as easy as simply lifting Rattrap's tail. This will trigger the spring loaded transformation, pulling the sides of the beast mode out and folding the animal head down. All that is left is folding down the legs the rest of the way and posing his arms.
Rattap comes with a small gun and like with the rest of the early waves of Basic figures the weapon can be stored on the toy itself. If you look carefully at the image above you'll see that the gun is actually made of two pieces that are stored on each side just above the back feet. I love the idea of accessories being self contained within the figure. I can't tell you how many small action figure accessories I lost as a kid. 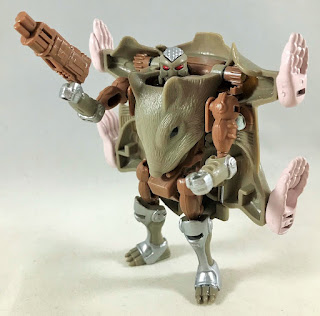 This version of the iconic character is far from perfect, but it's a great rendition despite being the first toy. The Kingdom version scales the figure down even more and is a fantastic toy, but if you're like me and were with Beast Wars from day one, this is a must own toy. While this reissue was overpriced in my opinion (which probably hurt the sales), it's a mighty fine version of the toy if you aren't one of those who has to own the original. I found no issues with the robot mode and he now stands proudly amongst his fellow Maximals in my Beast Wars display. Most Walmart stores have already moved away from this first wave of toys as their Spring reset has been completed at the handful of stores I've visited, but if you luck out and find him on clearance for $10 or less, jump on it. Even after all of these years, it's still a fun toy.
at 5:41 PM