Leave on the Light

Just in time for Friday the 13th! Since I've moved to ordering my comics online my horizons have been broadened. What I mean was that I've always been a Marvel superhero comic fan and I've often ignored other genres such as horror. A few months back I saw an title solicited by Antarctic Press, a small comic publisher that I somewhat follow. Simple titled Leave on the Light, the cover image and description of the book immediately had my attention. 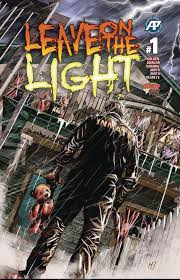 I've always been a fan of horror movies, especially the 80's slasher sub genre, and this book looked really appealing. The description straight from the Previews website:

Brace yourself for a shocker of a horror story! In a small town near New York, an undead serial killer has begun claiming the lives of children by using the city's electrical system.

I received the book in last month's shipment of comics and I sat the book aside, originally wanting to wait until all 3 issues had been released before I sat down and read them. However with Halloween just around the corner I've been on a little kick of late, watching horror flicks and even re-visiting Dead Rising 2 on my Xbox One.

I thought with today being Friday the 13th it would be a great day to go ahead and check out issue #1. While the book was short, it was great! You're immediately introduced to the story's villain, a old prison inmate that is back from the dead? If you like gore and violence then the opening few pages will be right up your ally. While not overly graphic with gore, the violence is right up there with your typical 80's slasher movie. 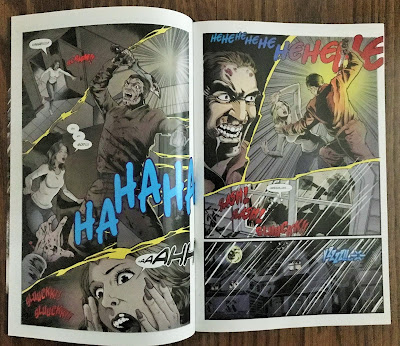 After the initial opening scene, the reader is then introduced to the other two main characters (police officers) which have been assigned to the case. The lead detective soon learns that things are starting to look a lot like a case he had years ago and that something wasn't right.

The book is 21 pages long, filled with some gorgeous art and coloring. Leave on the Light is the creation of Bradley Golden. What I didn't know going in was this project originated as a Kickstarter campaign. Similar to another Antarctic published horror book, Rags, somehow the creators got a publishing deal w/ Antarctic Press for a wider distribution.

I've already got issue #2 on order and after reading the first issue I anxiously await to read the next part of the story. The book has a cover price of $3.99 and there is a gold foil variant you can chase down if you wish. The book also features a flip cover and I believe the other two issues will feature flip covers as well.

If you are a fan of horror in general, especially in comics then you may want to give this book a try. Even though comics aren't necessarily rated like movies, this is definitely not a book for the kids. At the time of this post I've seen several reasonably priced listings on eBay, however larger online shops my MyComicShop.com has both the regular issue and the variant currently in stock without a mark up.
at 3:47 PM