It's been a long journey, but we've finally arrived with the culmination of the last 6 posts...Dinoking! Now for those of you reading that follow Transformers and know a little about these toys specifically, you already kind of know what to expect here. However I know I have several readers that aren't as well versed in G1 Transformers (especially the Japanese stuff), so Dinoking may not knock your socks off. I guess in some ways these toys are an acquired taste, especially since you'll have to put a lot of effort and money into acquiring them.

I've had a lot of fun documenting these toys. Because of the slimey shells and my fear of breaking the toys in any way, I don't handle these guys much. In fact if I hadn't transported them to Charticon 2013 a few months ago for display, I'm not sure if these series of posts would have ever happened!

I should mention that all of the Dinoforce characters in the Victory anime didn't use guns, but used blunt type melee weapons. Of course these guns are the same weapons that the U.S. Monster Pretenders came with, only in black. I'm not sure why the toys come w/ guns while their animated selves used melee weapons. Perhaps a cost savings move? Takara and Hasbro worked together back then so perhaps the plan from the start was to use these molds in both the East and the West. 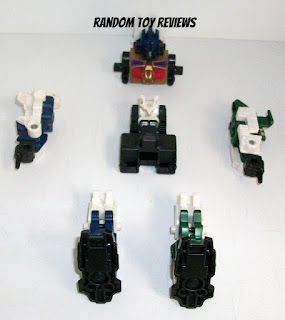 Dinoking and Monstructor join Devastator & Liokaiser as the only other Destron/Decepticon combiners that are comprised of 6 members. Dinoking uses Kakuryu and Rairyu to form the chest and torso. Because of their unique designs they cannot be switched out. The arms can be switched with each other as well as the legs. However you can't use a leg as an arm and vice versa. 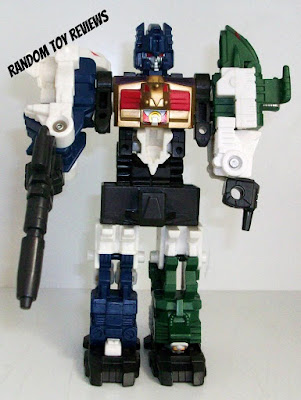 I personally love the combined form.  Yes the toys are small and as a combiner he can barely compete with the likes of Devastator or Predaking. I like the uniformity. What I mean by that is the limbs all look fairly similar, while yet different. It's not like one arm is an eagle while the other arm is a panther. The unified deco also is very nice. 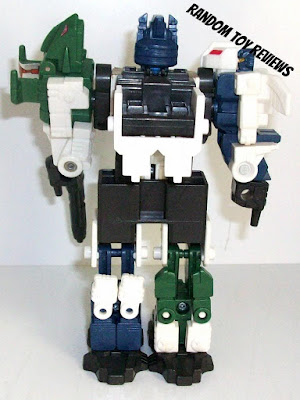 While some may think the gold stands out too much, it helps break up the darker colors. Just like the dinosaur Pretender shells being a huge improvement over the U.S.'s monster Pretender shells, the colors Dinoking sports completely blow Monstructor's wild colors out of the water. I wanted to have a few comparison shots of the two combiners, but true be told I'm afraid to handle Monstructor much because of his GPS issues. 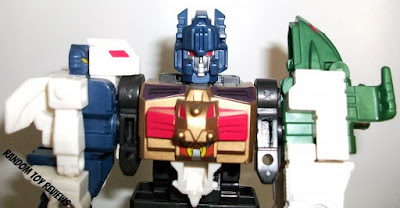 The Dinoforce team was the first Japanese combiner that I managed to build by buying each individual boxed piece. It was a challenge and ultimately set me back several Benjamins, but he was worth the time and money spent. With him being my first "holy grail" I really hope that I don't part ways with him anytime soon. While he may not be the rarest Japanese G1 TF out there, he proudly owns a place in my TF collection.