Let's face it.  There are a TON of 3rd party companies in the market now making add-on sets for Transformers and completely original figures now.  Trying to keep up with all of them can make the most organized person's head spin.

Last year when newcomer Toy World entered the market with their version of Megatron, Hegemon, I and many other collectors were blown away.  The quality of the toy blew my expectations away.  I'm happy to report that I had the same impression with SXS' newest release, Continuously Variable.

Setting aside the very odd name, I wasn't sure what to expect with this release.  After all I had never heard of SXS despite of their previous add on sets, and the announcement / pre-orders went up online after iGear's version of the character Gears.  All that aside once I saw some colored pictures of the near final product I was intrigued.  Thanks to a recent contact on Facebook I was able to grab this new version of Gears for a little less than the typical Transformer online re-sellers. Since the official name takes me longer to type than the character's name the toy is based on, I'll just refer to the toy as Gears from here on out.  The packaging is a little plain from what I expected.  Toy World used a window box for their version of the Throttlebots so I expected more I guess.  The original art used does a good job capturing the look of the G1 character.  The front and top of the box are identical as you can tell. Spin the box around and you've got a better look at the toy inside.  Of note SXS made sure to show off the light piping in the robot's head and just how articulated the figure is. 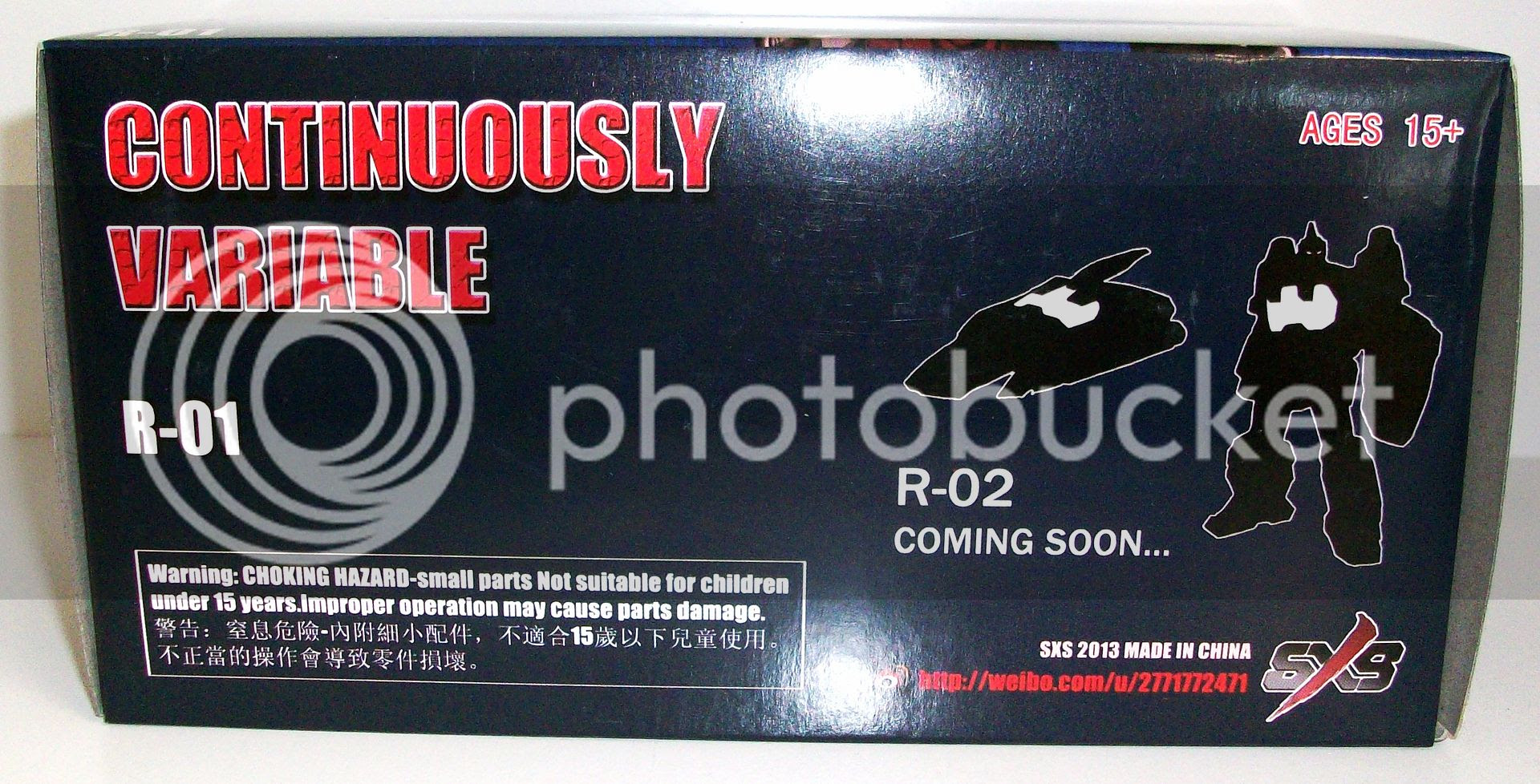 The image on the bottom of the box completely caught me off guard.  The next released planned appears to be none other than Blurr.  Not sure why part of the silhouette has the white area, but I can't wait to see how R-02 looks in finished form. Gears surprisingly is housed in a form fitting clam shell like tray inside the box.  I like this.  1) it protects the toy very well and 2) it helps give and keep the box's firm shape.  This also makes it very easy to return the toy back to it's packaging to transport or sell later on down the road. 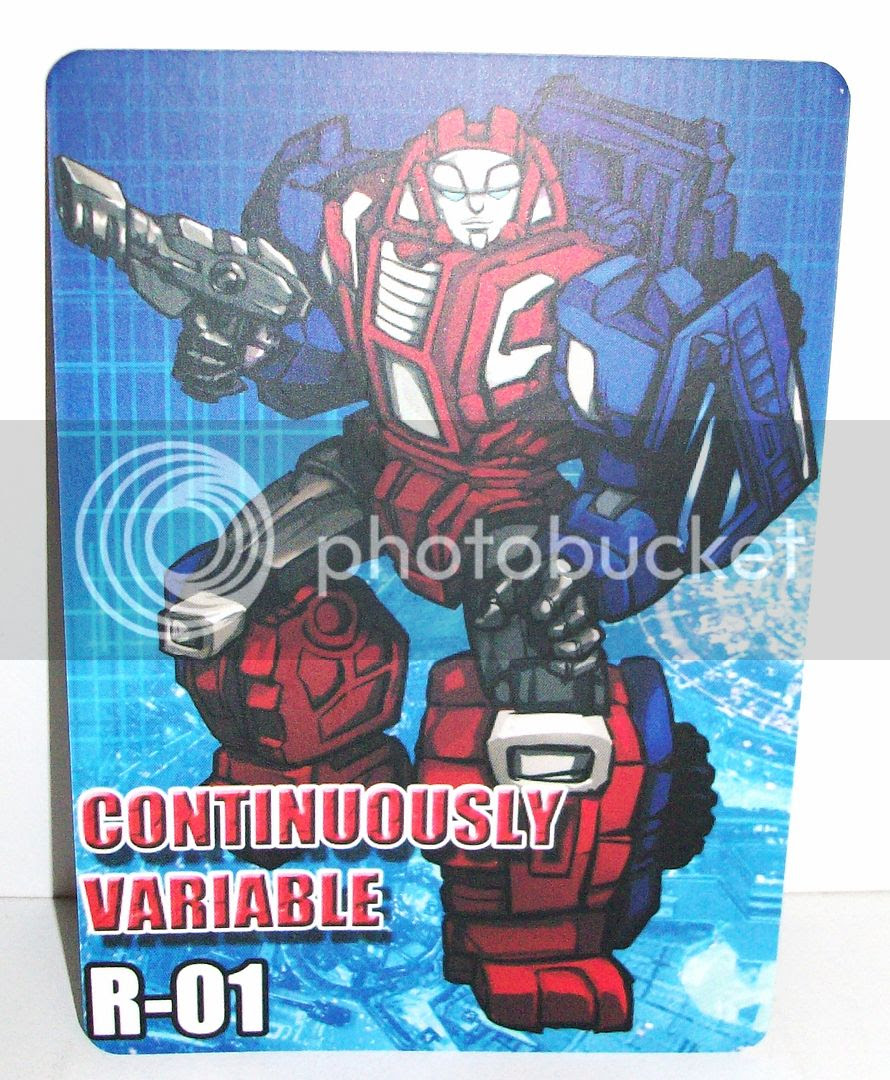 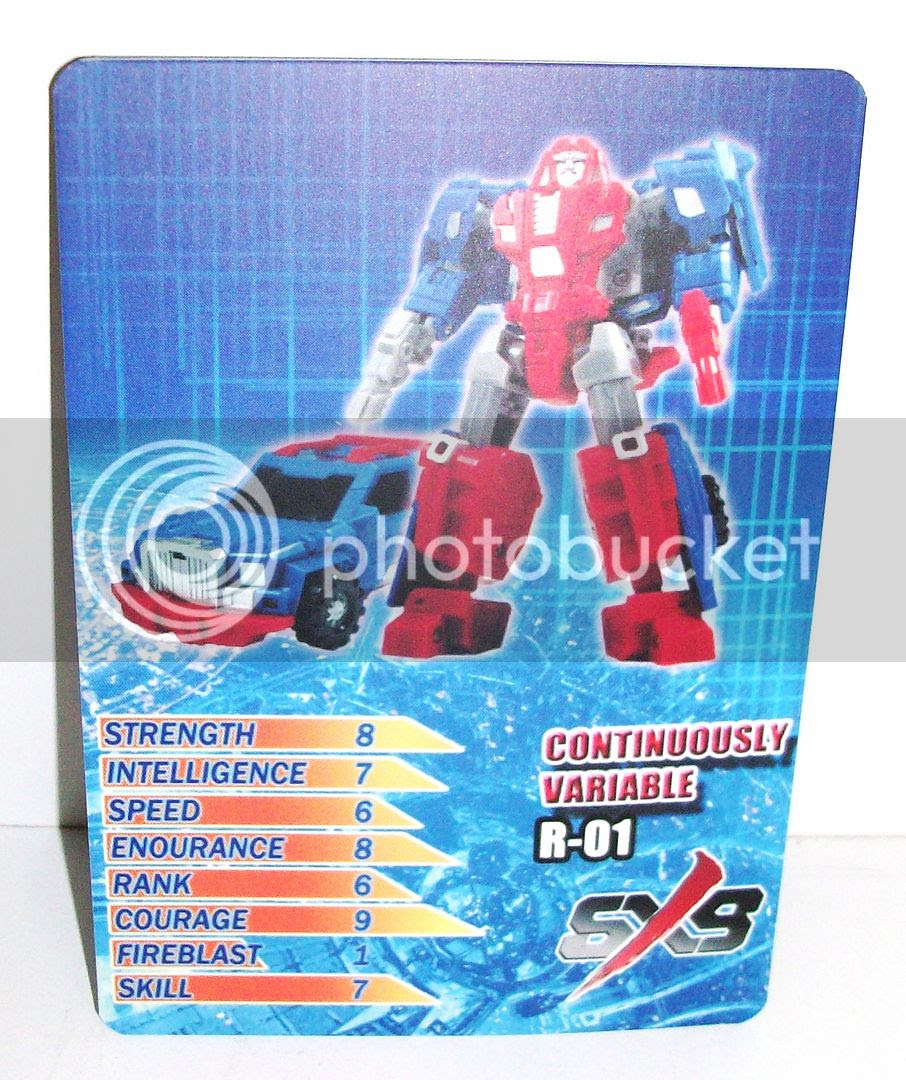 Just about every 3rd party company these days includes a trading card style tech spec...and I love this.  The card's front features the same new original art from the box, while the card's back features shots of the toy along with the individual power rankings. 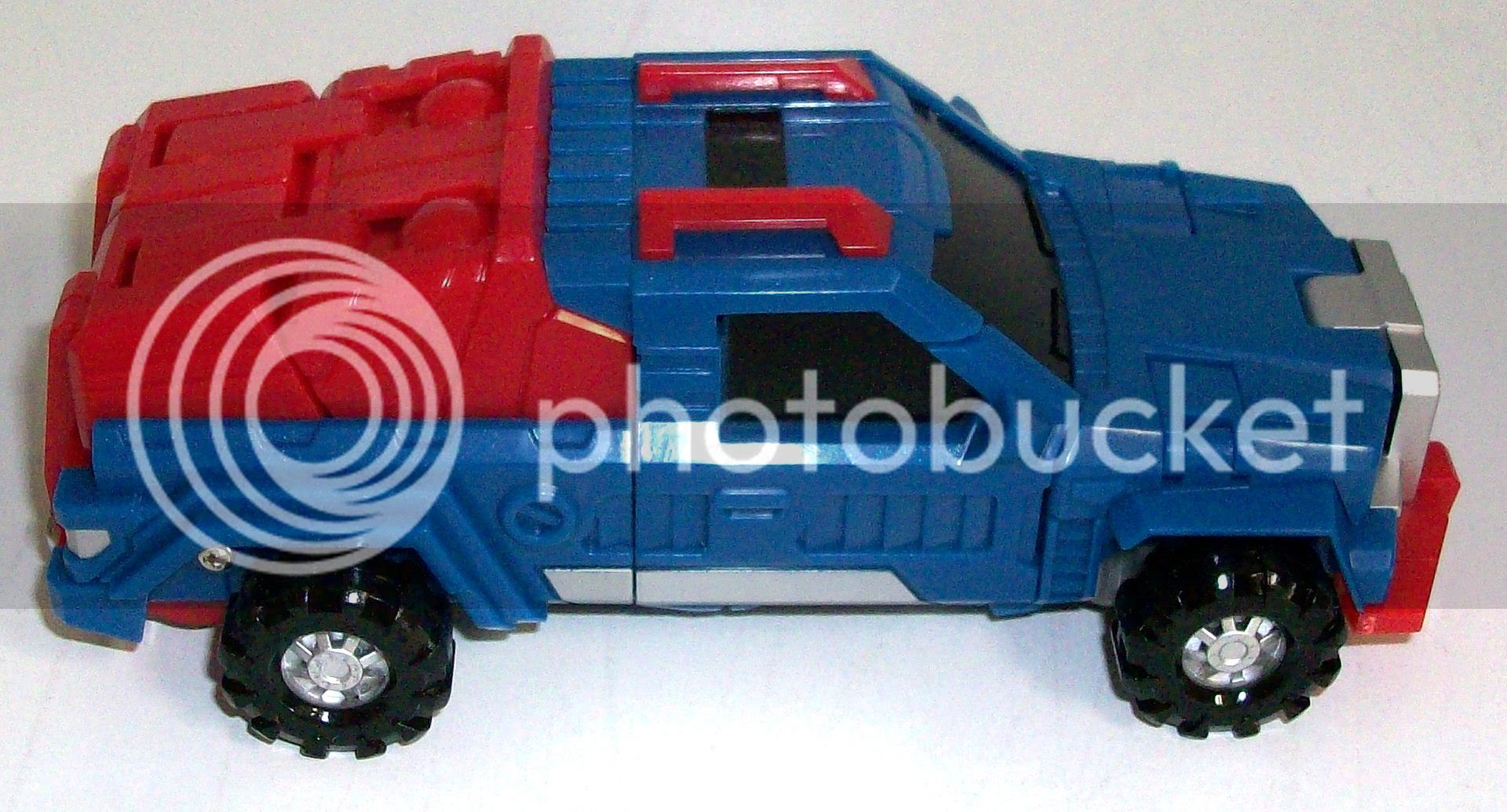 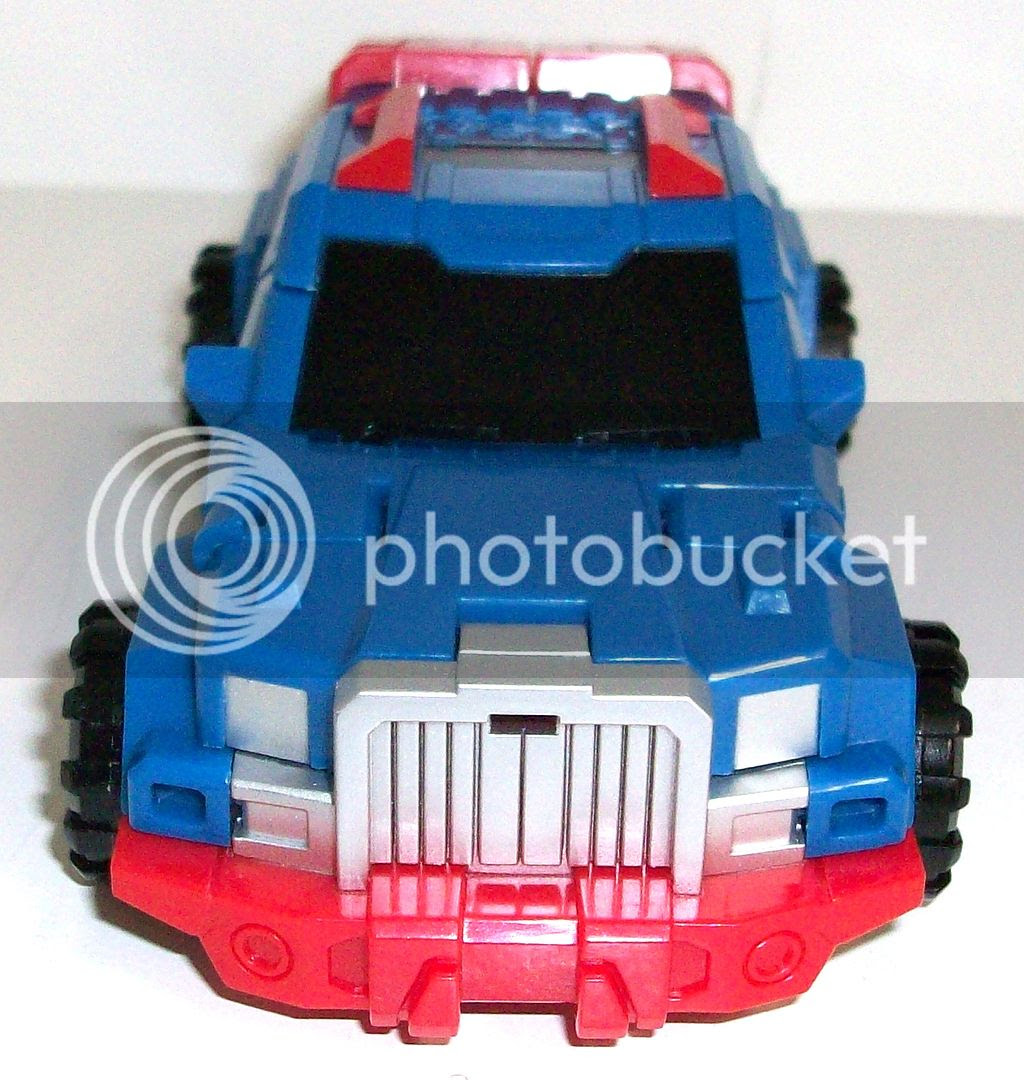 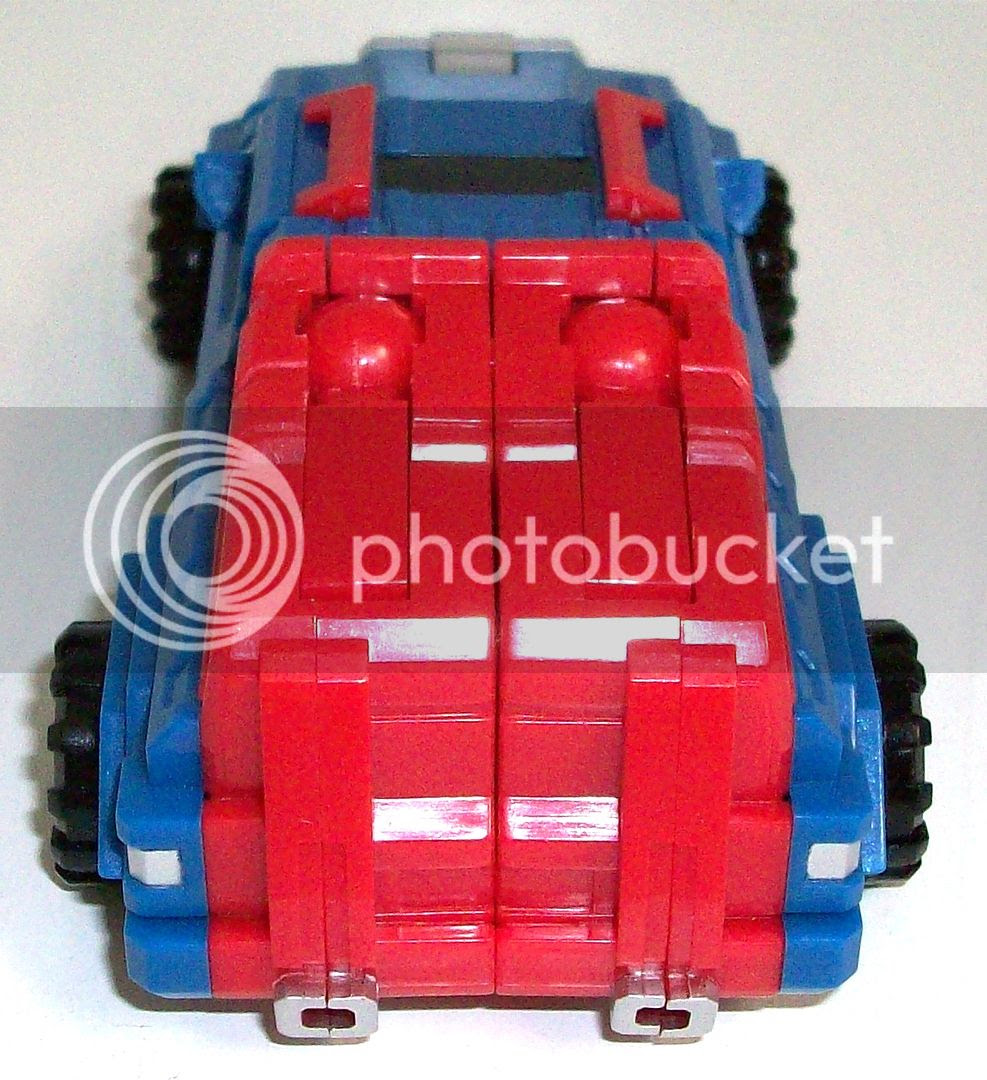 I am very happy with the overall look of Gears in vehicle mode.  Granted this version of Gears doesn't look just like his G1 toy, but that's OK since his G1 toy is basically a "super deformed" pick up truck.  As you can see Gears is no longer all squished up, but he still retails the same blue and red color scheme and the same red cargo in the bed of the truck.  Black windows and a silver grill finish off the G1 look.

The plastic used is very good.  Not too soft, but not too hard.  The knobby wheels roll really well on a hard, smooth surface.  All of the panels fit nice and tight and makes the toy feel really solid. 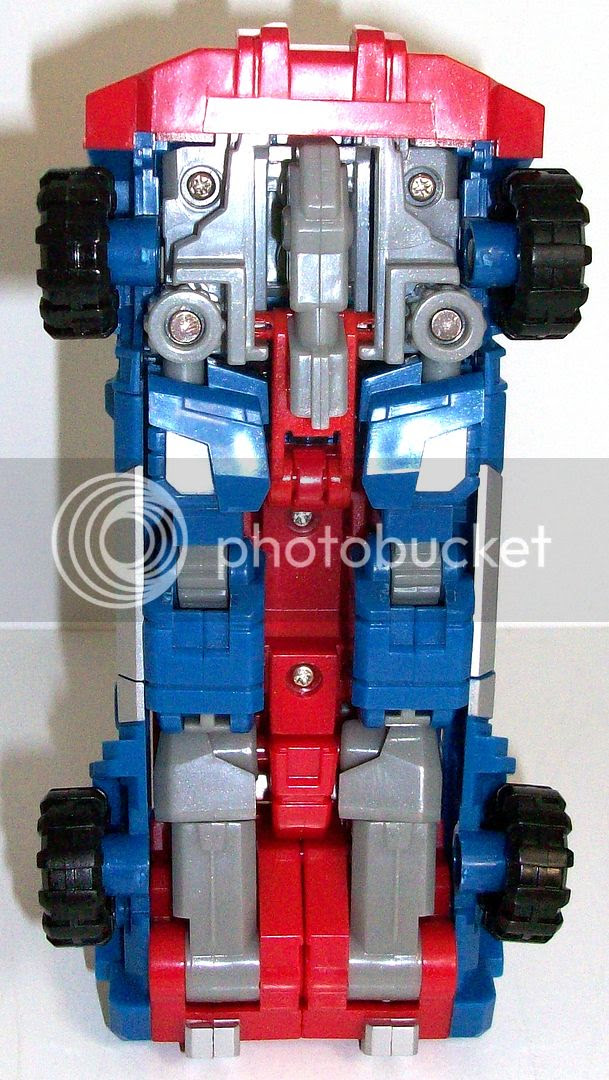 One aspect of Transformers I really can appreciate is when the designers find a way to hide and conceal all of the robot bits.  SXS has done a great job here looking at the underside of Gears.  Even one of the two included guns can be stored underneath.  Win! 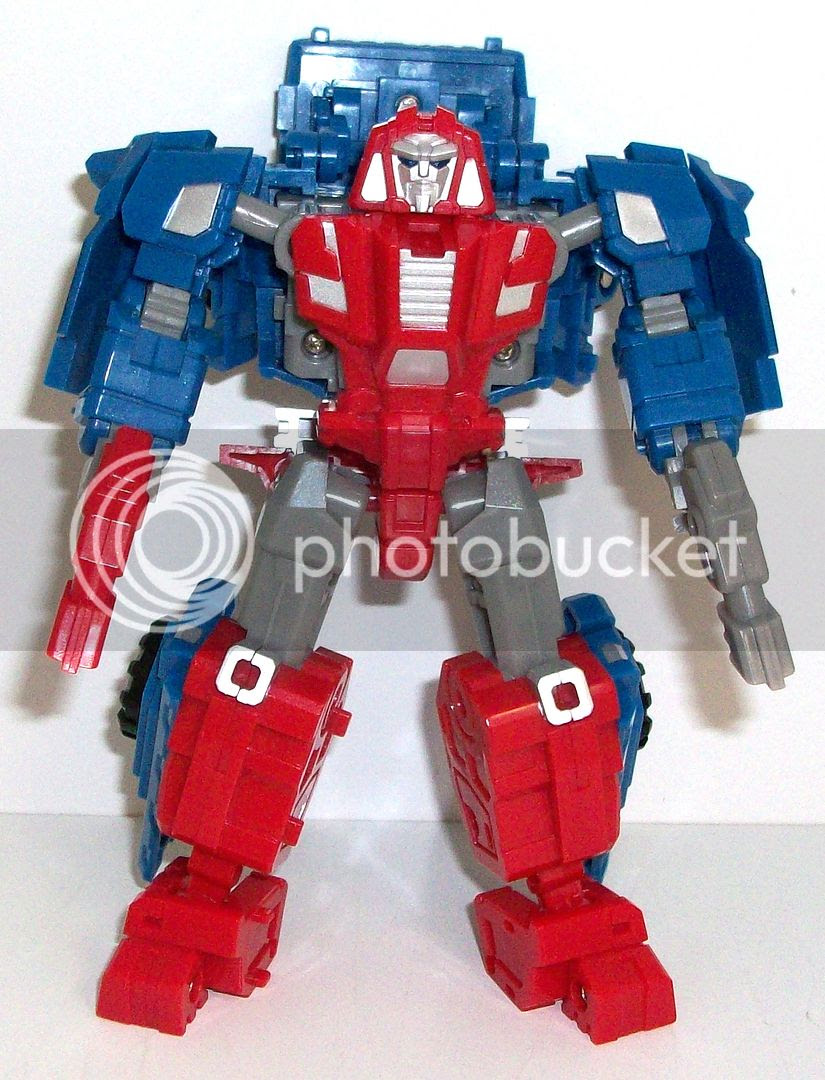 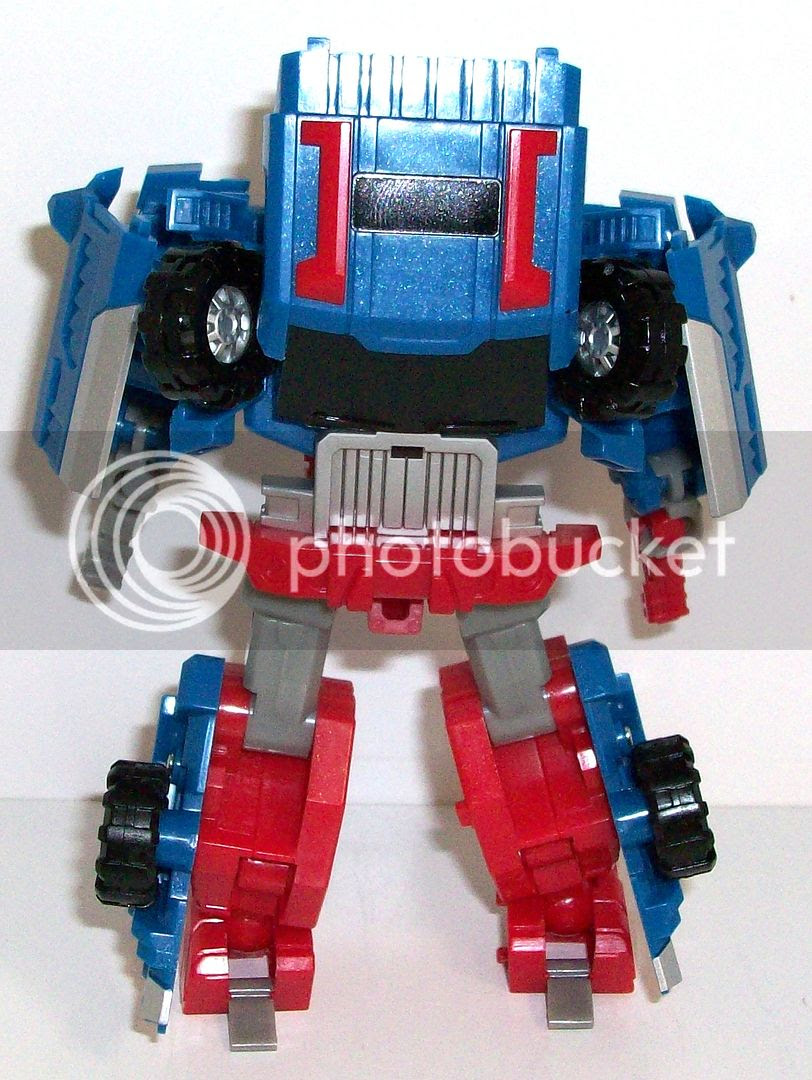 I forgot to take a picture of the simple instruction sheet, but it's very well laid out with easy to follow instructions to help you through the transformation process.  Gears unfolds slowly with tight joints and makes a great looking robot.  Look closely and you can see the blue paint has a slight metallic look to it.  It's not overly noticeable unless you hold it up to light (or a camera flash).

The designers did a bang up job at capturing the likeness of the Gears character.  All that is missing are some recorded lines from the G1 cartoon of Gears whining and complaining! Gears' head sits on a ball joint that is flush with the body, but the joint allows the head to be rotated a full 360 degrees.  I turned the head all the way around so you could see the entire back of the head is cast in translucent blue plastic that aids in the light piping for the eyes. 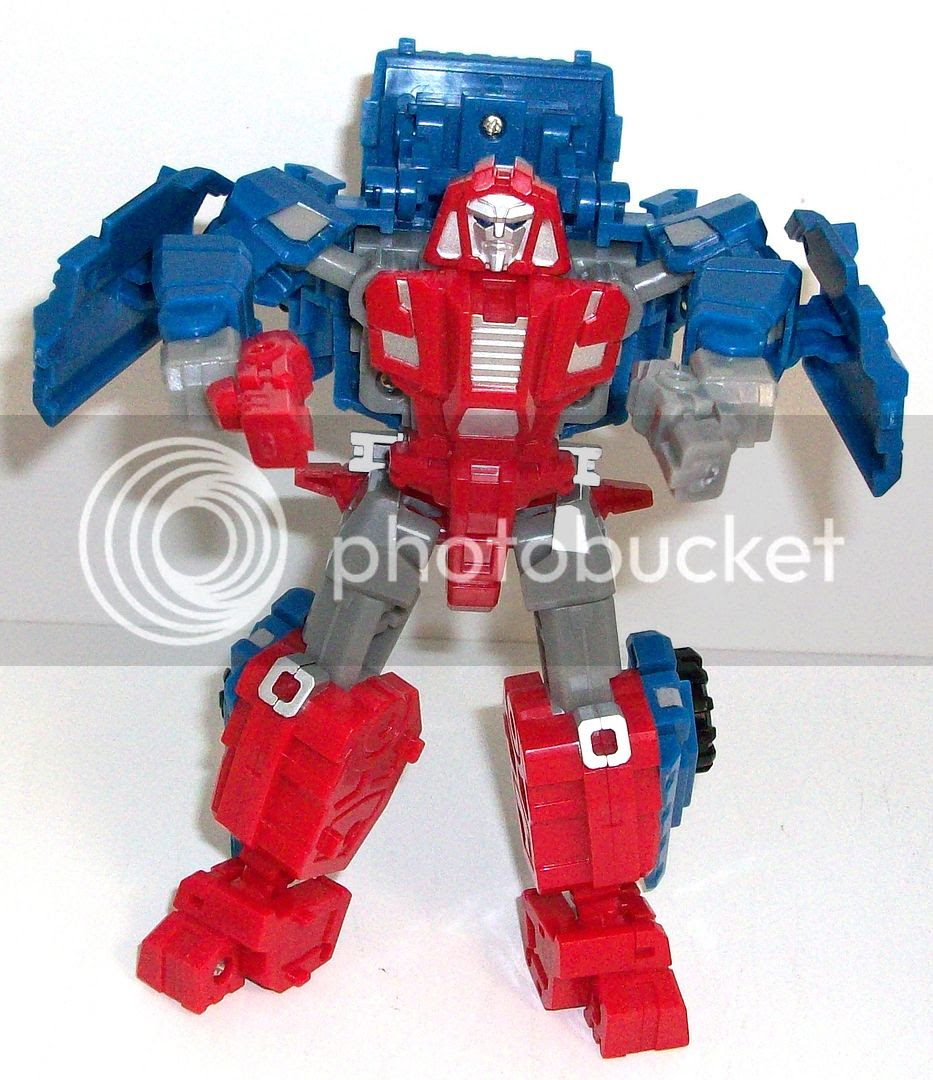 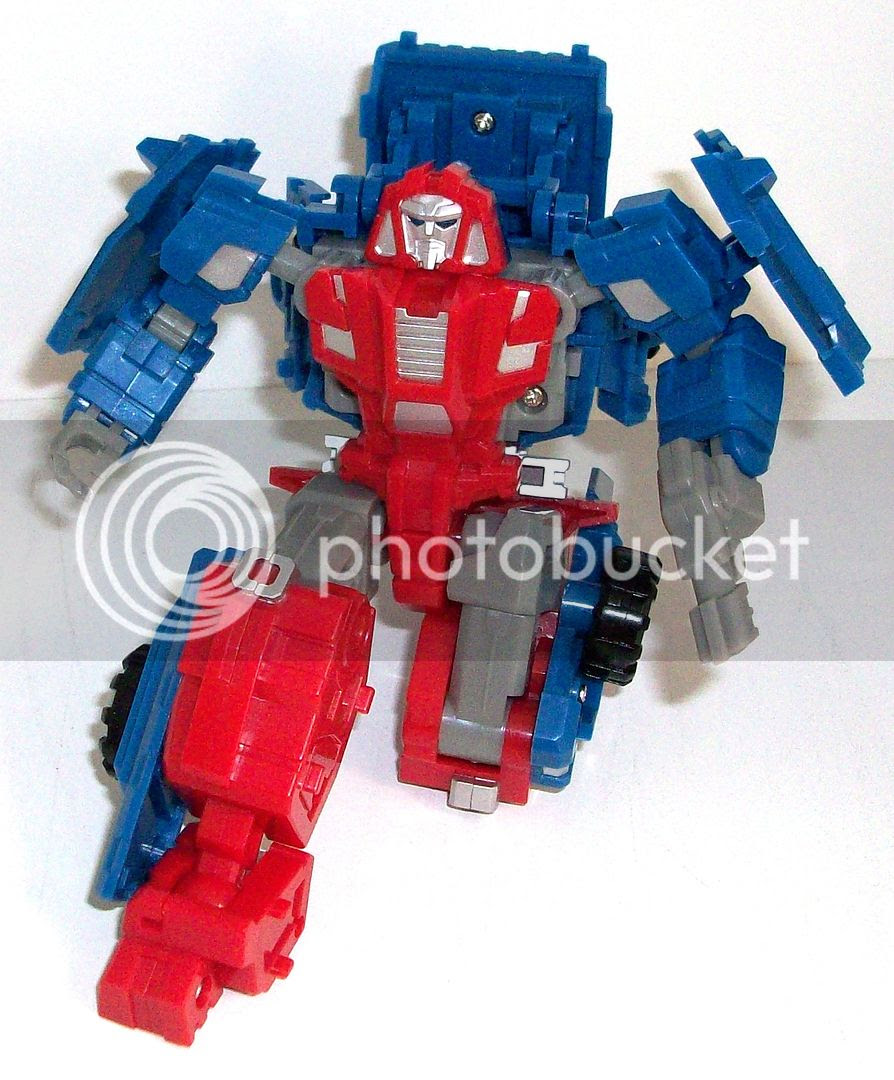 Don't judge Gear's articulation based on my lack of imagination of dynamic poses.  If you can think up the pose, I'm sure you'll be able to pull it off!  Most of the joints used in the figure are ball joints.  Right out of the package all of the joints were really tight.  I can't express how impressed I am here. 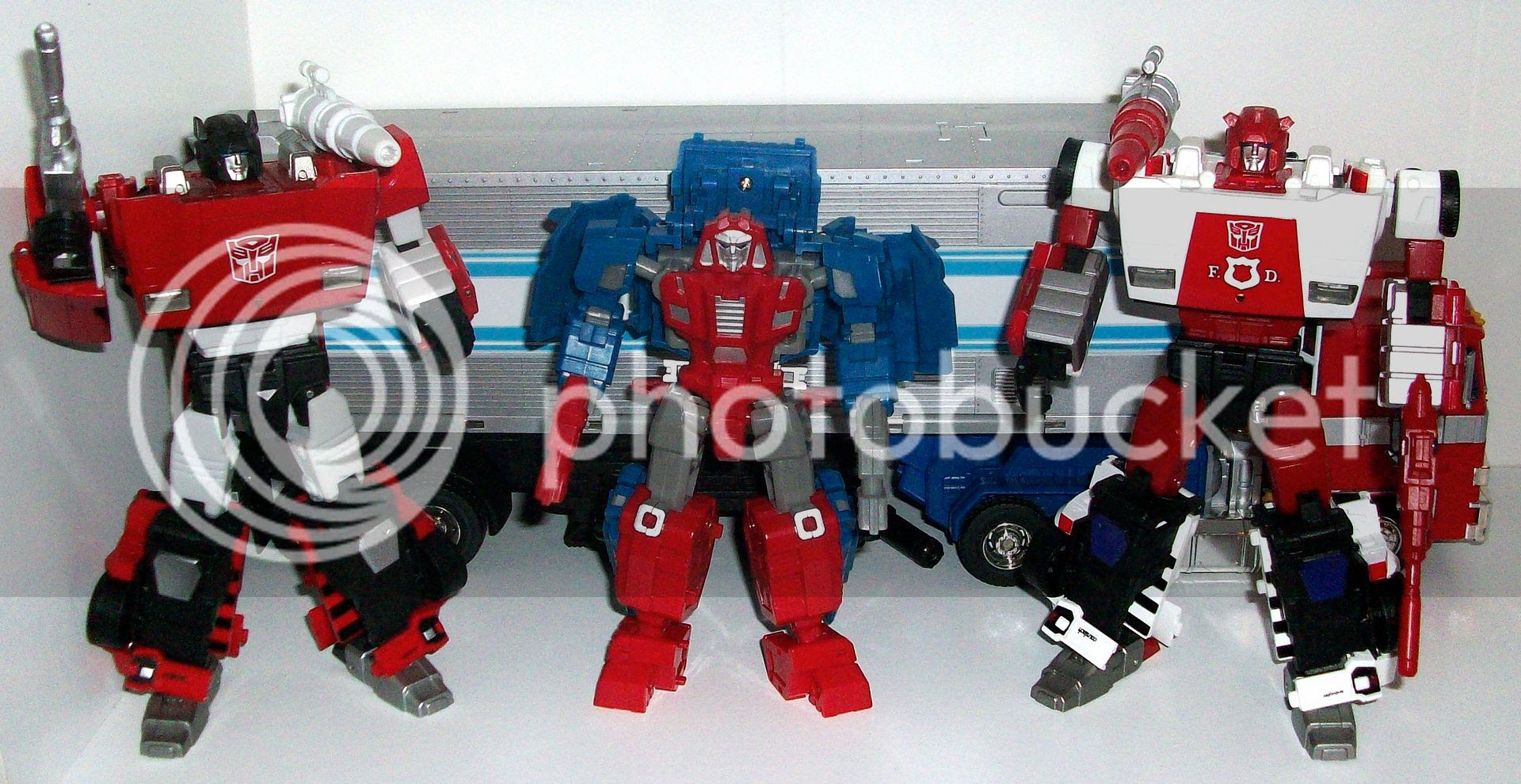 I know the burning question many will have is "How does he scale with other Transformers?".  Personally I think he is too big to go alongside your Classics / Generations Autobots.  Granted the Classics Bumblebee by Hasbro is about the same size, the iGear Mini Warriors fit the bill better.  I think Gears looks really great alongside the new Masterpiece figures as you can see above.  He's smaller than Sideswipe and Red Alert, but not tiny.  He should blend in well wherever you decide to fit him into your collection.  I haven't seen many pictures from other collectors yet so I'm not sure how everyone is displaying this new version of Gears.

In closing I have to say I'm very impressed with this release.  He's not the cheapest 3rd party Transformer (expect to pay around $70-$75), but for a figure that has seemed to fly underneath everyone's radar he's very, very good.  Toy World's subsequent releases have been stellar so I really hope that SXS follows suit with their next release.  Unless you just love the iGear Mini Warriors, I say grab this toy...he's that good.
at 10:19 AM