This week's assignment for the League is rather a simple topic - what are some of your most prized possessions.  What collector hasn't thought of this before?  We've all had those hypothetical situations brought up where you only could grab one item from your collection before your house burnt down, was wiped out by a tornado or fell into a black hole.

Believe it or not I've really never given this much thought.  However that is not to say that I don't have specific items that would fall into this category.

It should come as no surprise that my most prized (toy) possessions are Transformers...after all Transformers make up at least 90% of my toy collection.  The bigger my collection has grown the tougher this decision was. 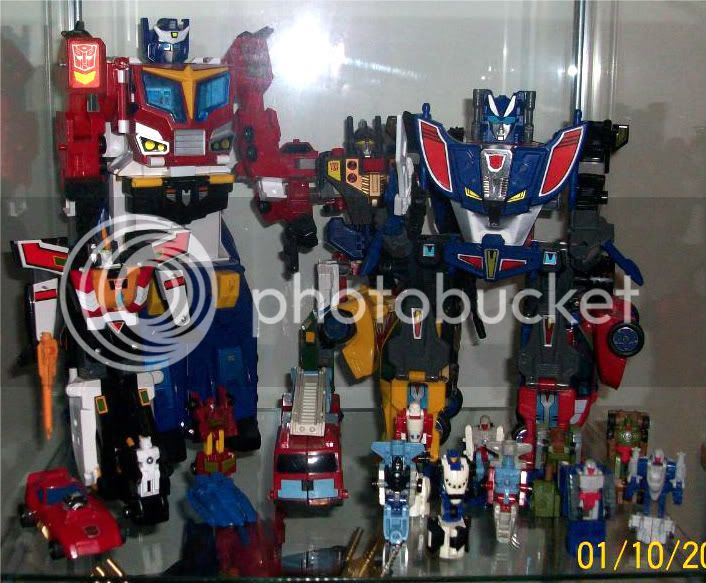 Immediately G1 came to mind for several different reasons.  Do I choose my vintage Star Convoy that I got boxed and for a steal years ago?
Was it Road Ceasar - the first Japanese exclusive combiner I managed to piece together?
What about Sonic Bomber that I bought sealed a few years back for a mere $50?
Or Hotspark since I love Corvettes and the exclusive red deco only found in Japan?
As much as I love these figures and they rank up there at the top they still aren't #1.  So who could beat out these titan Autobots?  Keep reading. 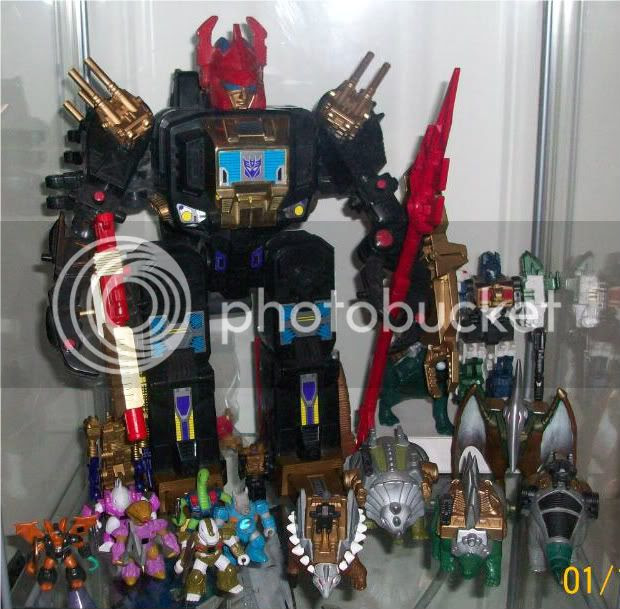 After much consideration and debating this came down to two items being tied for first place.  Black Zarak and Dinoking.  Why a tie you may wonder?  Let me explain.
I traded away the highly sought after 2006 Botcon exclusive Darksyde Megatron for Black Zarak (plus cash).  This was an awesome trade in my book while other collectors have look dumbfounded when I've shared this story.  Black Zarak was one of those TFs that I never thought I would own for many reasons.  1) his high price tag and 2) the GPS (gold plastic syndrom) issue. Black Zarak despite his short comings is an awesome G1 brick.  I love the new head sculpt and the addition of the large red spear makes him look so menacing.  This is the proper way to take an existing mold and make it better.  I'm scared to death to ever transform him let alone touch him so don't expect to see an in depth reviews of this any time soon!
Dinoking was another one I knew I'd have a slim chance at owning.  Thankfully however I proved myself wrong when I discovered Yahoo! Japan auctions years ago while I was still in college.  I worked full time while I was in school so I did have some "disposable" income.  I managed to pick up each individual Dinoforce member complete in box for no more than $100 each...some even cheaper.  Dinoking is comprised of 6 members - you do the math - I have a lot invested in him.  It helped that it took several years to acquire all 6 toys and I'm glad I'm not trying to buy him now as the secondary prices are crazy high now.  In addition to the cost involved I'm also a huge fan of the TF Pretenders.  Take dinosaur Pretenders and the fact that they combine to form a combiner and you've got yourself a winning combination!

I can't wait to find out what my fellow bloggers' most prized possessions are.  Cavalcade of Awesome already touched on this in last week's topic.  I'm sure the Lair of the Dork Horde & Toyriffic (among others) will offer up something good.
at 1:52 PM