Botcon 2012 is upon us.  While I'm not able to be there this year (I'm at Myrtle Beach, SC w/ my family) I wanted to share this idea of a post I've had since the character selection was announced for the box set of exclusive toys. 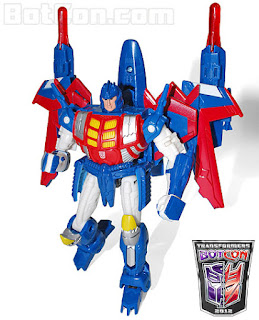 First of all I'll go on the record applauding Fun Publications for trying to modernize the character Metalhawk.  Being a huge fan of the G1 Pretenders I was excited to hear he was going to be in the box set...then I saw the early pictures of the toy.  Needless to say I was underwhelmed.  I understand what they were going for, but man did they ever miss the mark.  At least that is my opinion.

If you aren't already in the know this new "Classics" version of Metalhawk was made from the Generations Thunderwing mold.  Yes, Thunderwing was a fellow Pretender, but the problem is this mold was so character specific.  The mold just doesn't lend itself very well to make another character.  Fun Publications did sculpt a new human head for the body which is a nice touch.  The colors are bright a vivid as well.  But I still have a hard time looking at this toy and calling him Metalhawk. 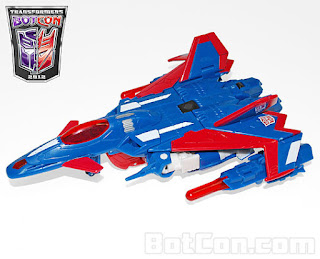 In alt mode I'll say that Metalhawk does look a little better.  I'll at least give him a passing grade for his jet.  Takara tried something different with the inner robot for G1 Metalhawk in that the body was partially die-cast metal.  The robot also didn't share the transformation that a lot of the other G1 Pretender inner robots had.  Changing this up allowed for a different kind of vehicle, but it still looked small and simplistic.  This new version is modern and sleek.  The more I look at it the more I like it.  Before I give too much praise however let's take a look at the real Metalhawk. 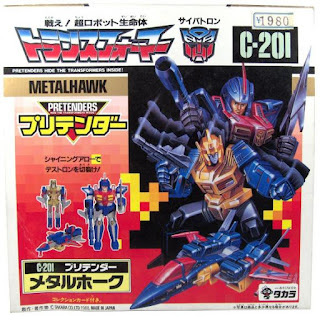 Before I get started here let me thank the staff at TFW2005 and their great Resources section.  If you read a post of mine earlier on about my packed closet then you'll know that I can't easily put my hands on a lot of the boxes for my TFs.  Metalhawk is one of these so the packaged pictures you'll see come courtesy of TFW's Resources database.

It should be no secret that I love the vintage Japanese G1 packaging.  Takara did a stellar job at creating some beautiful boxes for their line of Transformers.  They really knew how to present the toy in a way that made you want to immediately grab it off store shelves.  I particularly like the boxes they used for their Pretenders. 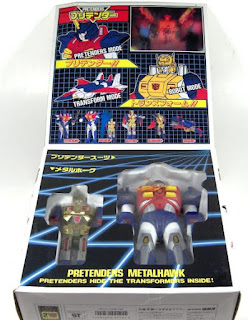 It seemed that as the years passed in Japan the boxes seemed to evolve a little.  What I mean by that is the box art slowly started to dominate the front of the boxes.  The little blister window that showed a glimpse of the toy eventually was overtaken by beautiful artwork.  Click here for a larger look at the awesome artwork of Metalhawk.

Since the artwork now dominated the front of the box Takara decided to give the box a flap that could be lifted up to reveal blister windows showing the toy inside.  The upper part of the flap featured more art and if I'm not mistaken this art was taken from the Masterforce cartoon.  You also get the traditional transformation "instructions".

From what I've been told this window was important to the Japanese consumer as they wanted to see what they were buying.  Makes sense to me. 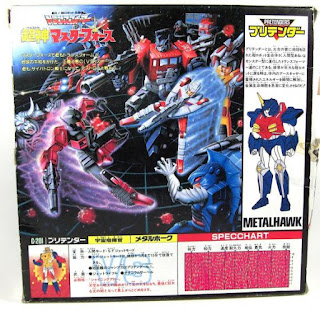 The back of the box features the same beautiful space battle art work.  I've always thought this was one of the best looking art work on the back of any Transformers packaging - G1 or otherwise.  I particularly think Lander (Landmine) looks so awesome.

The valiant, daring commander of the Cybertron Pretenders. He gave the Headmaster technology, received from his fellow Cybertron Chromedome, and Headmaster Jr. transtectors to some Earth children.

Abilities:  In jet mode, can travel from Earth to the Moon and back in 15 minutes. Has the highest short-range jumping power of all the Pretenders.

Final Attack:  "Shining Arrow" - while in midair, he aims and fires an arrow of light at enemies on the ground. The arrow becomes a giant sword of light, striking a final blow from right over the enemies' heads.

Released in 1988 exclusively in Japan Metalhawk has always been a hard figure to track down.  Because he is a Pretender I'm sure that knocked him down on a lot of collector's priority list since Pretenders don't usually get much love.  With Fun Publication and Botcon bring a new modern Metalhawk to the masses the desire/demand for the G1 character has increased tenfold.  I saw a eBay auction in the last few weeks for a complete boxed G1 Metalhawk sell for over $700!  I'm glad I didn't invest that much into either Metalhawk.  Yes, I said either.

You see when I first discovered the internet as I was getting back into collecting Transformers again in the mid 90's my brother told me about newsgroups.  If you don't know what I'm talking about newsgroups were similar to today's forums and message boards, but in a simple and stripped down way.  I believe I was browsing the toys.transformers.rec group (or something like that) and I ran across a girl selling a complete boxed Metalhawk for $50.  Shortly before this I had set a goal to collect all the Pretenders before I actively searched for other G1 toys.  I had no idea who Metalhawk was, what he looked like or that he was a Japanese exclusive.  I just knew he was a Pretender toy that I didn't have and I had the cash at the time.  A money order and 2 weeks later and I had my first Metalhawk!

At some point while I was still in college I must've needed some money so I parted w/ Metalhawk.  I don't remember what he sold for, but it was more than the $50 I paid for him.  Of course I regretted my decision to sell him so after a short period I was back in the hunt looking to acquire him again.  The one I own now I actually bought in 2 different transactions.  I paid a little more than $50 for the toy minus the box and all the paperwork.  I had the tray and all the pieces so I was happy.  Literally just a few days after I found an empty box w/ the instructions, catalog, tech spec card and unused sticker sheet on eBay.  I believe I won the auction for around $20.  Seriously.  I'm not making this stuff up!  Man, I really miss those days when you could score some good (cheap) deals on eBay.

OK, now that my trip down memory lane is done let's take a look at the actual toy.  This has to be the best looking humanoid Pretender shell hands down.  The armor is awesome.  Heck even the head sculpt ain't half bad!


I can't believe it's never dawned on me before today, but could Star Convoy's colors been based on Metalhawk?  I know Convoy has always been red and blue, but the what about the white and yellow?

One thing that I really like about this Pretender shell versus others from G1 is the lack of a belt.  I don't know about you, but I hated trying to remove the belt from the small little hip tabs.  The shell is basically held together by the helmet.  Speaking of the helmet is more like a half helmet...similar to the one Lander (Landmine) wears.  I should also mention the red piece on the helmet is soft flexible plastic.  Before doing this post I've been trying to play catch up watching Transformers Prime on Netflix so this red piece reminded me of Starscream a little.

His weapons are large and impressive.  The gun is nearly as tall as the shell, but my favorite is his sword.

Metalhawk himself fits snugly inside his Pretender shell.  Like most Pretender robots his legs fold up and his arms fold in to make the robot compact enough to fit inside.  I'm not sure if the robot is compatible with any of the other Cybertron (Autobot) Pretender shells.

I assume he gets his name from the fact the robot is partially cast of die-cast metal.  All that gold that you see is heavy die-cast metal.  By the late 80's metal was being used on Transformers.  My guess is that it was a cost savings move.  I could actually care less...I'm just glad the robot doesn't look like all the rest of the Pretender robots.

My only gripe with Metalhawk's robot is the head.  In the Masterforce cartoon you can clearly see "antenna" on the side of his head.  Since the head on the toy is cast of metal this feature doesn't come off all that well.  If you look closely you can see the antenna, but the area between the head and the antenna is filled in w/ excess metal.  Small gripe.

Metalhawk wields his rear tail fins as guns in robot mode.  This is very similar to Pretender Classic Starscream.

Metalhawk's jet mode is small, heavy and a little clunky...but still awesome.  As you can see mine is a little naked.  I didn't dare sticker this toy.  He's only missing a few stickers and they are mostly on the wings.

Transformation from robot to jet is simple.  The blue part of the legs fold up and the feet stay folded out as they form the top tail fins.  Fold out the red wings from behind the arms.  Before you pull the arms behind the chest flip out the jet nose piece and fold it down.  There are flat pieces of plastic on the arms that when folded up hide the cavity that held the jet's nose piece.  Attach the guns into the side holes for the rear fins and you're done.  He does have retractable landing gear.

I wanted to pull out Phoenix (Cloudburst) to compare sizes of both the robot and vehicle modes, but my G1 shelves are pretty tight and I just didn't want to take the time.  Sorry.  I'm lazy.  So I grabbed the Triggerbot Dogfight instead. As you can see Metalhawk is just a tad bigger and wider in jet mode than Dogfight.

Since I'm not going to Botcon this year and I loathe the whole Shattered Glass gimmick the TF Club is bringing back to the box set I won't be adding the new updated version of Metalhawk to my collection.  I'm fine with that.  Honestly I am.  I don't hate the toy and if I didn't already own the real deal I may not feel the same way.  That said I may eventually pick him up, but I'm in no hurry.  If you are a fan of G1 Pretenders then I can't recommend this guy enough.  Like I said earlier though prices of this vintage piece have gone a little crazy on the secondary market.  I don't know if the prices will ever come down though as the vintage stuff continues to grow in popularity.  Hopefully you enjoyed this look at Masterforce Pretender, Metalhawk.