You may be familiar with the term "Lucky Draw" if you collection Japanese toys. From what I know the term coined thanks in part to contests that people could enter to win one of usually only a few special toys. Takara did this a lot with various series of Transformers.

In late 2003 Bandai continued the current re-imagining of the Machine Robo brand with the creation of Mugenbine. By the time 2005 had come around Bandai had created a figure for just about every letter in the alphabet. Through the company's official website (http://www.mr-club.jp) you could somehow enter a contest for several different limited toys. One of which was Mugen General 3. The toy is comprised of Airleon, Buildgiraffet and Carryeagle and each figure was made in a chromed silver. From what I could gather off the website at the time only 3 sets were made. Years ago when I was crazy about Mugenbine I ran across an auction for this silver "Lucky Draw" Carryeagle and I could resist the opportunity at adding such a limited toy to my collection. Because of it's limited nature I'm a little leary handling the figure much, but since I had to move my toy room I decided to do a proper post on this awesome rarely seen figure. 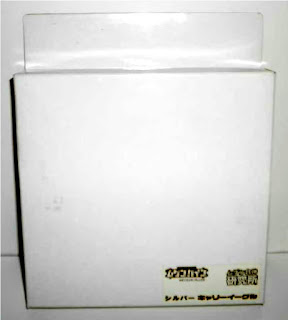 The box is rather boring being a plain white box with a black and white label. The box is the same size as the majority of the 'alphabet' series toys. 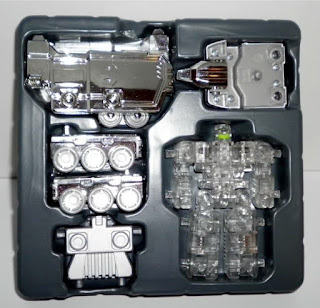 Inside the plain white box you'll find a plastic tray containing all the shiny chrome parts including the clear translucent Mugenroid figure. 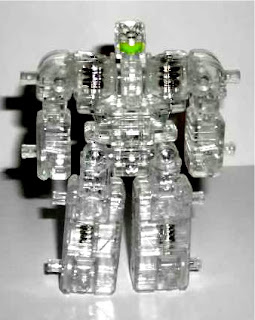 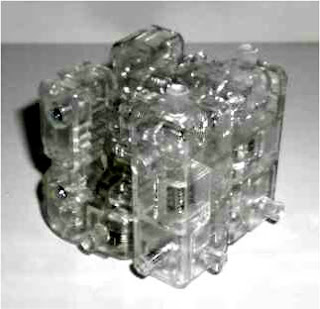 The only paint apps on the figure is the lime green used for the eye visor.  The rest of the Mugenroid is entirely made of clear plastic. 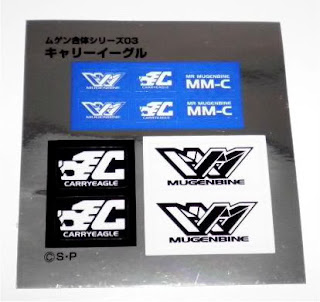 The set came with it's own sticker sheet and other than the colors being different from the one included with the normal release of Carryeagle they are the same.  I of course had or have no intention of ever using these however.

There aren't any real changes to the toy other than the silver chrome so I'll just share a few pictures of each mode.  We'll start with the animal mode: 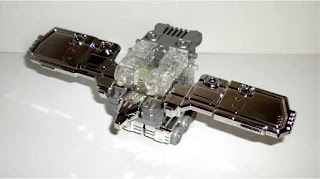 I was never too fond of the eagle mode.  The large wheel sections that double as the feet are just too big for my tastes.  You can tell that Carryeagle was one of the early Mugenbine releases as the modes got much better with subsequent releases. 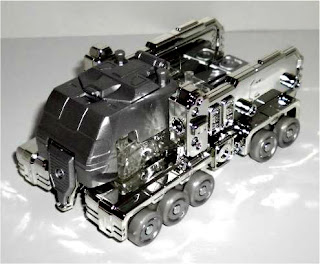 The dump truck mode is by far my favorite.  Being a big Transformers fan I would have loved to see this set released in neon green and purple!  You can see in both modes here that some of the Bine parts aren't chromed.  The silver pieces does have a metallic look, but overall it's more flat than shiny.  Surprisingly they fit in well overall with the silver chrome and the translucent Mugenroid. 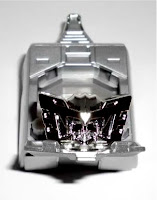 Carryeagle comprises the top half of the Mugen General 3 gestalt so it's appropriate that his combiner head has the chrome treatment as well.


This is a fantastic toy in it's own right.  Throw in the silver chrome and the limited nature of being 1 of 3 in existence and it puts it over the top.  Since I acquired this piece I have sold off most of my Mugenbine collection so this figure can be had if you really want it.  Price is negotiable so if you are serious please don't hesitate to contact me.