The Transformers Cyberverse line of toys seemed to start off a little flat in my opinion. The designs of core characters such as Bumblebee took design elements from other iterations of the character, but put a new "kid friendly" spin on things. Initially I dismissed most of the gimmick filled releases and focused more on the Transformers War for Cybertron: Siege series instead.

As later waves of figures begin to hit store shelves, I started to pay the series a little more attention, starting with Shockwave. Suddenly Cyberverse began to at least gain my attention. More and more classic characters were starting to be introduced into the series. While they all had a twist on their look, many of these classic characters were modeled after their Generation 1 (G1) selves that I grew up with. 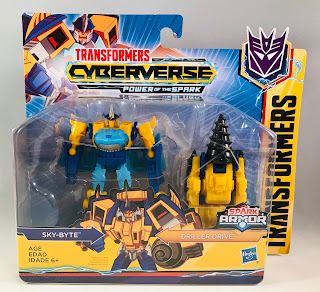 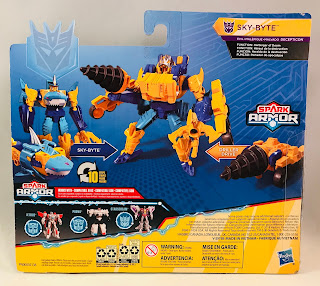 The most recent wave of Cyberverse toys includes characters from other "universes" such as Cheetor from Beast Wars / Beast Machines appeared, followed by Sky-Byte from the Robots in Disguise universe. When I first saw these images solicated online I didn't know what to think of them. Silly maybe? Out there? Creative? Maybe a little of all of the above? When I finally found the Spark Armor releases at retail I just stared at them. I looked them over and over and before you knew it I was headed to the checkout with several in my hands.

While I never liked the Transmetal 2 Cybershark mold that Sky-Byte's RID toy was based on, I loved the goofy character he was portrayed as in the animation. The more I stared at Sky-Byte in the store the more I became intrigued with this toy. Sky-Byte comes packaged on a blister card and retails for $14.99. Starscream, Prowl and Jetfire are his wave mates. 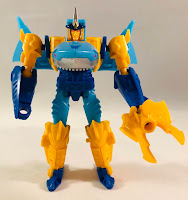 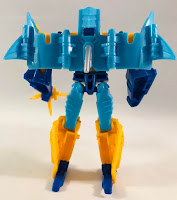 Hasbro has used so many terms to describe their various size points of Transformer toys that I don't even know what this size toy is called. It's smaller than a standard deluxe scale figure, but a little bigger than the old basic size. For me it's the perfect size of figure to fiddle around with. In fact, he became my desk-bot for several weeks after opening him for this post.

Sky-Byte resembles his Robots in Disguise self pretty good. While not as big or detailed as his original toy, there is no mistake who this character is. This size Spark Armor toys are a little more simplified than some of the other larger releases, but that doesn't mean the toy doesn't pack a punch. The design is simple, but gets the job done. Paint applications are limited, but well applied. Articulation is much better than I anticipated as well. There are hollow parts on the toy, but that is the new norm when it comes to Hasbro. 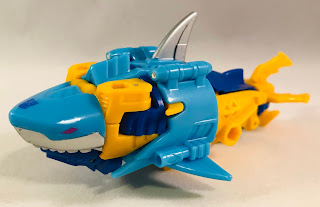 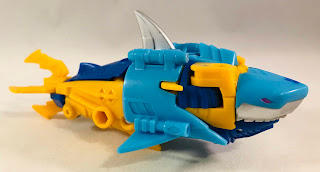 Transformation into shark mode only takes a handful of steps (10) before you are done. I was able to go between the two forms rather easily without the use of the instructions. In shark mode Sky-Byte resembles a submarine more than a cyber-shark. Actually I love this new look. 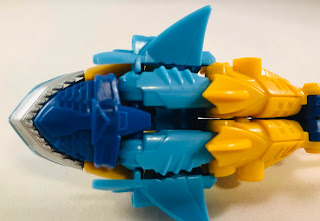 One of my pet peeves is when you can see the robot parts or kibble in the alternate mode, especially the robot head. The designers did a good job at concealing most of the robot parts in shark mode. Here on the bottom you can make out the robot's waist and legs, but they are glaringly noticeable. 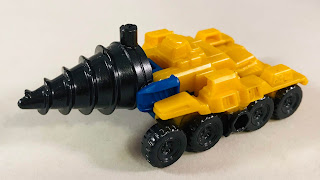 Sky-Byte's Spark Armor is Driller Drive. While I've not yet watched any of the Cyberverse animation, I'm going to assume these armor pieces like Driller Drive are not sentient robots and just weapons. My first impression of this piece upon pulling it out of the packaging was it immediately reminded me of Bandai's Machine Robo Mugenbine toys. If you're not familiar with Mugenbine, those were transformable toys that had a core robot that could form a cube and all of the included pieces could be assembled with the core robot to form various animals, vehicles and more.

Sadly the wheels and drill piece on Driller Drive do not move. In fact you can't do much with Driller Drive on it's own other than to use your imagination. However his real purpose is to form a set of battle armor (or Spark armor) for Sky-Byte. 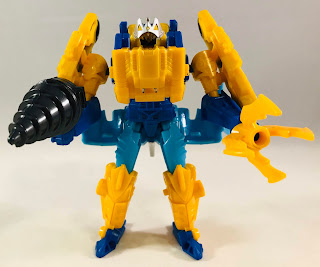 Driller Drive easily separates into a few pieces, mainly the drill piece, each side of the drill vehicle and the center portion. The two side pieces simply attach to the sides of the upper arm, while the center portion folds in half to reveal the battle helmet. This piece fits over top of Sky-Byte to form armor for the chest and back. The drill piece can be wielded using the attached 5mm peg. 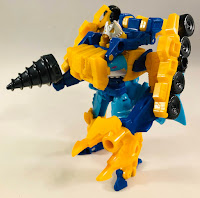 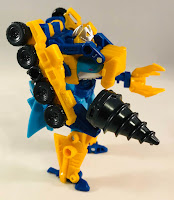 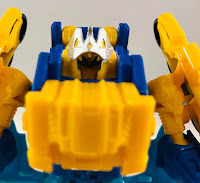 While I've only opened one other Spark Armor release, it seems as if the battle helmets all have some sort of theme that matches the main character. In this case the battle helmet has a fish motif...fitting for Sky-Byte. I like the look of the helmet, even though the Sky-Byte's actual face sets back in the helmet and makes it a little hard to see his face. 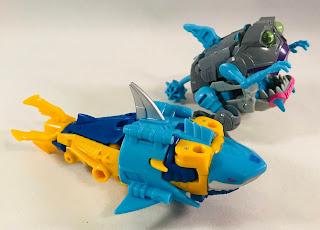 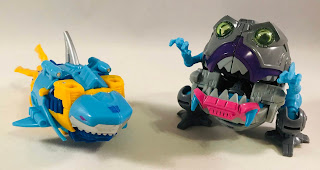 Here you can see Sky-Byte compared to a Legends class Sharkticon from Titans Return. While the figure is small, it's a fun release. I know the Cyberverse series isn't aimed at me, but this toy has reminded me that it's OK if my Transformer isn't super detailed or super articulated. Toys are meant to be fun and if I was a kid I would be all over this toy as well as others I've seen in the series.
at 10:38 PM