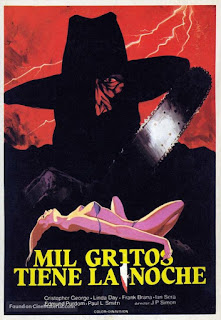 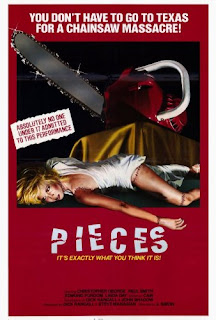 I remember seeing the VHS jacket for Pieces in our local Video Visions movie rental store back in the 80's. I knew my parents would never let me watch a movie like this when I was young, but I've always been curious about this movie for some reason. Thanks to TubiTV, I was finally able to watch this movie in all it's 80's, grainy (and bloody) glory.

What I didn't know before watching this movie that it was a Spanish film, pretending to be American. The movie is set in Boston, MA and was partially filmed there, but the producer (Juan Simon) was Spanish himself and most of the movies he's known for were filmed in his native country.

The movie opens in 1942 and you see a little boy sitting on the floor of his room, singing a line from Humpty Dumpty while working on a jigsaw puzzle. When the camera pans up over his shoulder you can see the puzzle is a painting of a nude women. The boy's young mother stands at the door of his room, watching. When she enters and sees the puzzle, she instantly goes beserk, hitting her son. She starts tearing apart his room looking for more "filth", while threatening to kill him if she ever finds this sort of items again. She commands the boy to go get a trash bag so she can clean up this mess, only he returns with an axe and brutally kills his mother. A concerned neighbor goes and gets the police after no one answers the door bell and while that is happening, the young boy begins to cut up his mother with a hand saw. Yup, this movie is "exactly what you think it is".

The movie fast forwards to 40 years later (1982), to the campus of a New England college. A young female, studying out on a lawn somewhere on campus is attached by a masked man wielding a chainsaw, decapitating the girl. When the police show up to investigate, the find the body...but the head is missing. Hmm...

The police detective, Lt. Bracken is played by Christopher George. His assistant was Sgt. Holden, played by Spanish actor Frank Brana. I immediately recognized Christopher George, but I couldn't place him in any other movies I had seen. Then later it hit me as he played Peter Bell in Lucio Fulci's cult classic, City of the Living Dead. George's wife, Linda Day, also plays a roll in the movie as the undercover cop, former tennis pro.

While I like Christopher George as an actor, the rest of the cast wasn't that great. Now knowing that it's a Spanish film makes a little more sense with some of the casting. There are several plot holes and goofs in this movie that it's hard to take it seriously. That and some 80's movies just haven't aged that well. However the special effects and gore, while tame to today's standards, were really good. I can imagine this movie causing quite the stir with audiences and the media when it was original released in 1982.

Obviously the idea behind the killer wielding a chainsaw as their weapon of choice had to come from Tobe Hooper's classic Texas Chainsaw Massacre, however don't mistake Pieces for just being a knock off as the two films are quite different from one another. Texas Chainsaw wasn't that gory of a movie, cameras cutting to a different view at the last scene so the viewer could imagine in their mind what was happening. Not in Pieces. If you're squeamish in the least bit, then there are a few scenes you'll want to close your eyes to or turn your head.

I'm glad I finally watched this movie because while it was silly and comedic at times (which I believe were unintentional) it was a fun ride. I can see why this movie has a world wide cult following and has become a horror classic. It's gritty, dark, gory and centers around a perverse and corrupted killer (who has style...they wear a fedora!). If you like 80's slasher movies and you've never seen this movie, then do yourself a favor and head over to TubiTV using this link and watch the movie for free.
at 7:39 PM