If you aren't that familiar with Alpha Toys' Screechers Wild!, I wouldn't be surprised. Even though there was a CGI series that aired on YouTube, I believe this line mostly flew under everyone's radar. Or at least mine. I didn't find my first toy until last Christmas while shopping a K-Mart that was going out of business. I later found a few others on clearance at Walmart and the eventually they landed at Ollie's stores. 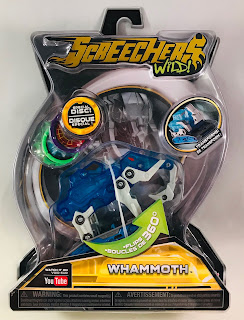 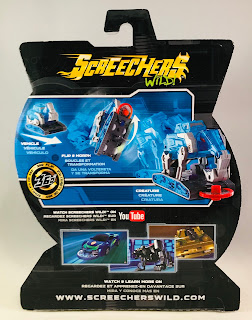 The concept of Screechers Wild! can best be summed up by saying it's an amalgamation of: Hotwheels, Transformers, Pokemon and Yu-Gi-Oh!. The animated show does a good job at blending these concepts as it features young kids that use these "toys" in a battle arena type setting. However these Screechers also are found in the wild of sorts as fully autonomous robots.

Pretty much all the toys released across the 3 series were cast in translucent plastic with minor paint apps added here and there. I would have preferred an opaque plastic with more paint apps, but I gathered Alpha Toys was a rather small company so I imagine their budget was limited. 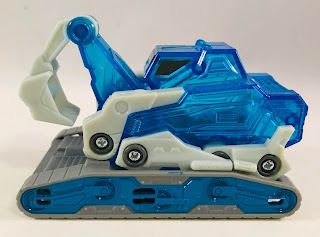 One of my favorites so far of all the ones I've acquired is Whammoth. He hails from series 2 and sports a back hoe construction vehicle. This was a departure for the more common sports car theme prominently used in the first series. As you may be able to see, this mold has some decent design in the treads as well as the body itself. For the most part the animal bits are integrated quite well into the overall design. Of course the name gives away it's alternate form, but just looking at this you might think it's a regular Hot Wheels type toy. 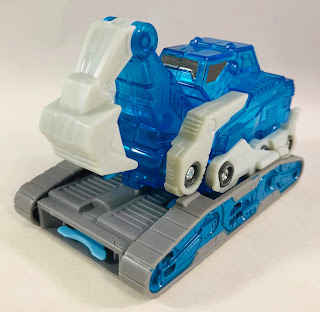 I don't know what scale these would be considered, but they are a tad bit bigger than your traditional die-cast vehicle like Hot Wheels or Matchbox. Whammoth does have free rolling wheels on the underside and the gray bucket piece does move forward and backward just a bit. The paint apps are limited overall, but in vehicle mode the only paint I see is the blue used on the side of the treads and the black for the windows. The rest of the toy contains molded plastic in either dark gray (treads), light gray (animal bits) or the translucent turquoise blue.

As you can see in my video, you can simply push the vehicle along a flat, smooth surface towards the disc to trigger the transformation. You can also purchase one of the Screechers Wild! launchers that are sold separately to launch the vehicle I believe there is also a disc launcher that you can use to aim and launch the discs towards the actual vehicles. The one time I saw that for sale at Ollie's I passed on it and I haven't seen another one since.

I would not recommend holding the vehicle and inserting a disc manually as the spring underneath is under quite a bit of tension and if that plastic piece on the bottom of the vehicle were to snap and hit your finger it will hurt. Think of it as a loaded mouse trap. For this reason along these toys are not meant for children under 6...and even then I would think adult supervision would be necessary. 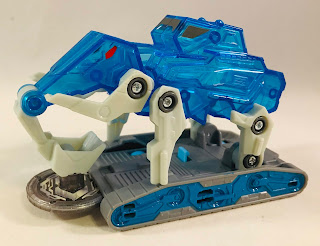 Once transformed Whammoth looks pretty awesome. I love how he's standing on the tank treads with his head ever so closely arched up. The red paint used for his eyes really pops on the translucent body. Because of the transformation you can move the tusks up, but why would you need to do that? In the animated show the animals like Whammoth here that transform and are standing on the base of the vehicle are not depicted that way, but as free running animals. I guess they could have made some of these detachable from their base, but honestly I like the way it looks in this mode as-is.

I have acquired the majority of my Screechers Wild! collection at Ollie's thus far. Most of the toys there can be had for $3.99 with the larger 3rd series ringing up for $5.99. Every toy line seems to have a gimmick and this one is somewhat original. I know it's not the first toy line to feature a spring loaded transformation, but Alpha Toys did a good job with this line in my opinion. 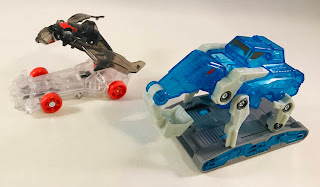