By now most retro video game collectors and enthusiasts know that Nintendo's patent on the old 8-bit video game technology has expired. For some time now various companies have been making different variations of consoles using Nintendo's 8-bit platform. Some have been better than others (Messiah's Generation NEX comes to mind as being one of the better clone systems), some of them are down right garbage.

I myself use a Hyperkin clone system to play my NES games for a few reasons. 1) Its size. The thing is tiny, about the size of a few CD jewel cases stacked on top of each other. 2) It was cheap. I think I paid maybe $20 for it 10+ years ago. 3) Its reliable. I've owned many "toaster" NES consoles and even replacing the 72 pin connector would only go so far in reliability for me. I like the top loader version, but the lack of AV inputs still makes me scratch my head.

When I decided to branch out into the world of collecting Famicom games, I looked at the various Famiclones as they are called to see what was the best option. I looked at the Generation NEX as well as some of the consoles manufactured by Hyperkin and Retro-Bit. I ultimately went with a genuine Nintendo Famicom AV console I scored for a great price direct from Japan. A little later I even added the Disk Drive add-on. All set now, right? Well kind of.

After watching several reviews online of the portable Super Nintendo handhelds, I wondered about a portable Famicom. Was there such a thing? Sure enough there are several entries in this category, none of the official though. No surprise there. After trying to do my home work and find something that was of a half decent quality AND find something that I could afford using my eBay budget, I landed on a handheld manufactured my a company called Subor...or Zhongshan Subor Educational Electronics Co., LTD. Man that's a mouth full!

This handheld (I believe) is officially called the Subor Mega Drive Portable, SB-Z12. Not sure why the Mega Drive name is included as this only plays Nintendo 8-bit Famicom games. I was able to purchase this direct from Hong Kong via AliExpress.com. For a mere $30 bucks shipped I'm now the proud owner of a working, portable Famiclone system! 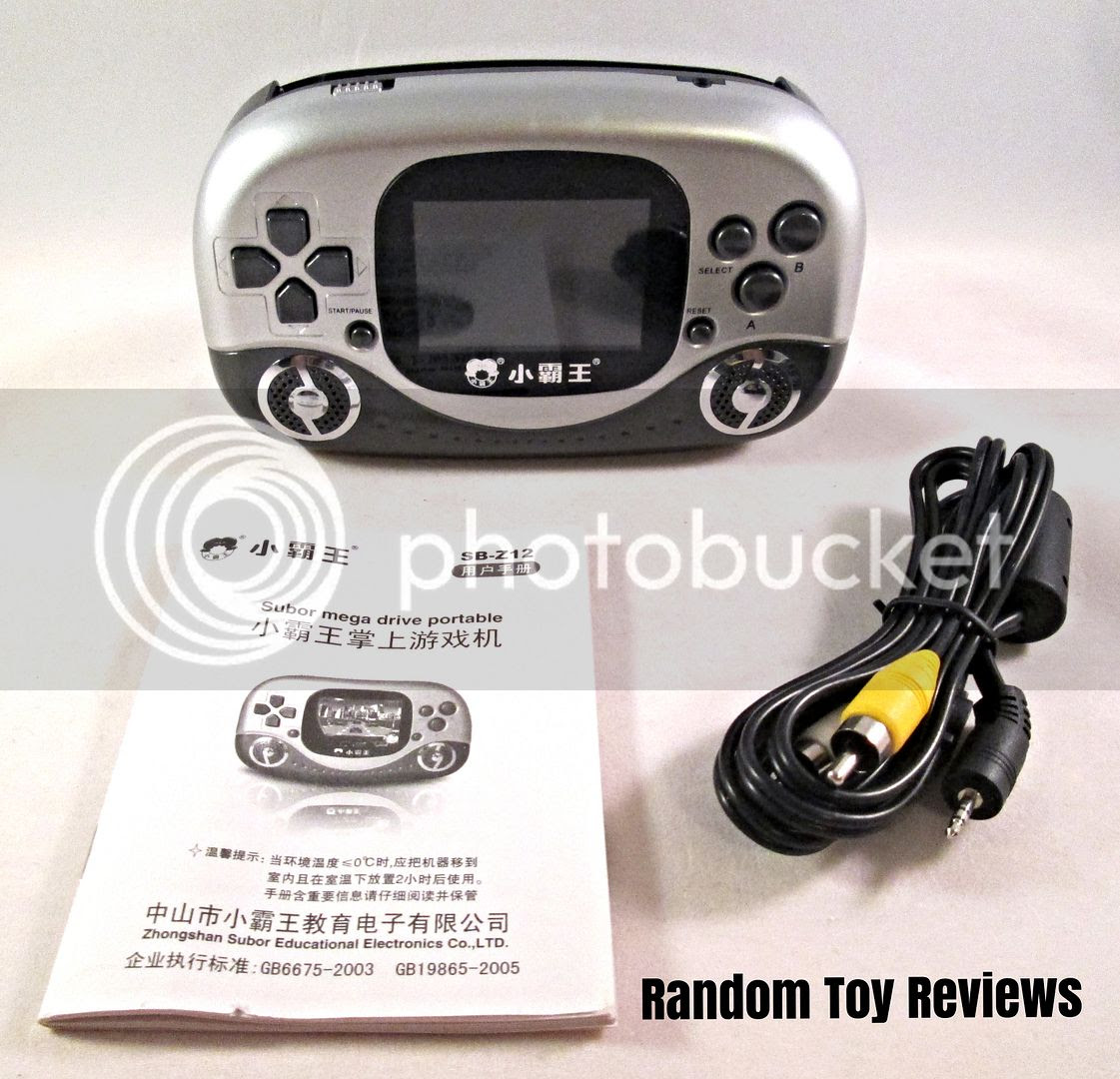 The system was shipped to me in a small cardboard shipping box. No outer packaging whatsoever. I saw the same system recently being sold by a seller on eBay and his had some decent looking packaging, so I'm not sure what gives here. For what I paid I really can't complain though. In the shipping box was the console, instruction manual and a cord that allows you to connect the console to a TV. The console operates on 4 AA batteries and of course these were not included.

Upon opening the box I was surprised at how small, yet how big the thing was. Remember the very first Game Boy and how small, yet big/chunky it was? The system itself measures approximately 6 inches long, 3 inches tall and 1 1/2 inches thick. Yeah, it's not that little. However even with batteries installed, it's not that heavy. On the face of the system you'll find a 1 1/2 x 2 inch color LED screen complete with 4 button directional pad on the left and Select, A & B buttons on the right. The two small buttons are Start/Pause and Reset. Some reviews complained about the small Reset button being located so close to the A & B buttons, but in my use with the system I haven't come near accidentally pushing the Reset button during game play. Underneath the button layout are two small stereo speakers.

On top of the system is the On/Off switch on the left and the A/V out port on the right. The cartridge slot itself has a dust cover flap that completely covers the 60 pin connector inside. This is one of the features that I really liked. The door features a spring and smoothly disappears when a cartridge is inserted.

On the bottom of the system is a stereo headphone jack on the left and the volume control knob on the right. 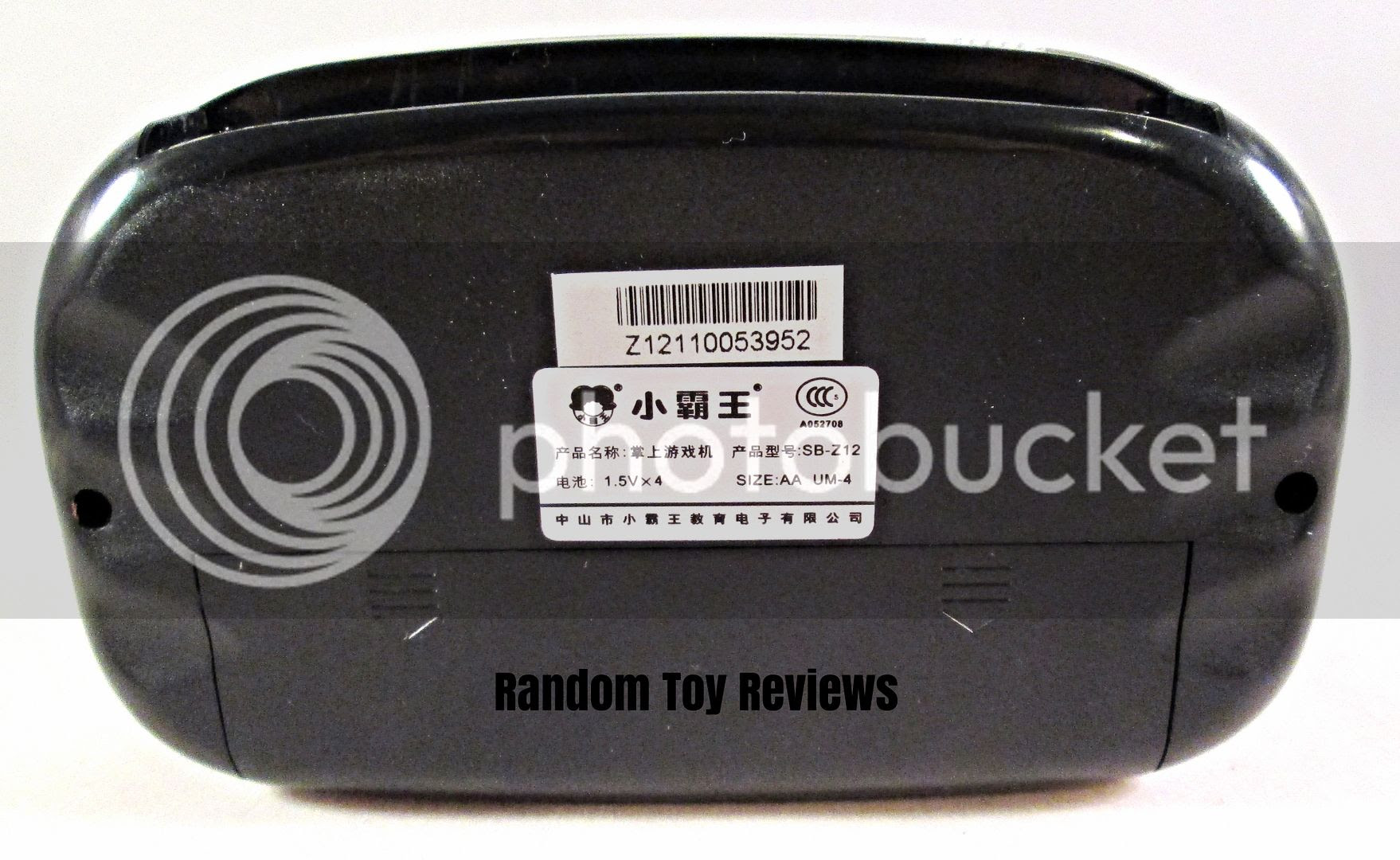 Another nice feature that surprised me was found on the back. There are 3 little indented finger tip grips if you will on each side of the system. While not covered in rubber or anything like that, it does make it a little more comfortable gripping the device. So far the longest I think I've played a game in one sitting was about 45 minutes and never did my hands start to cramp or feel uncomfortable. 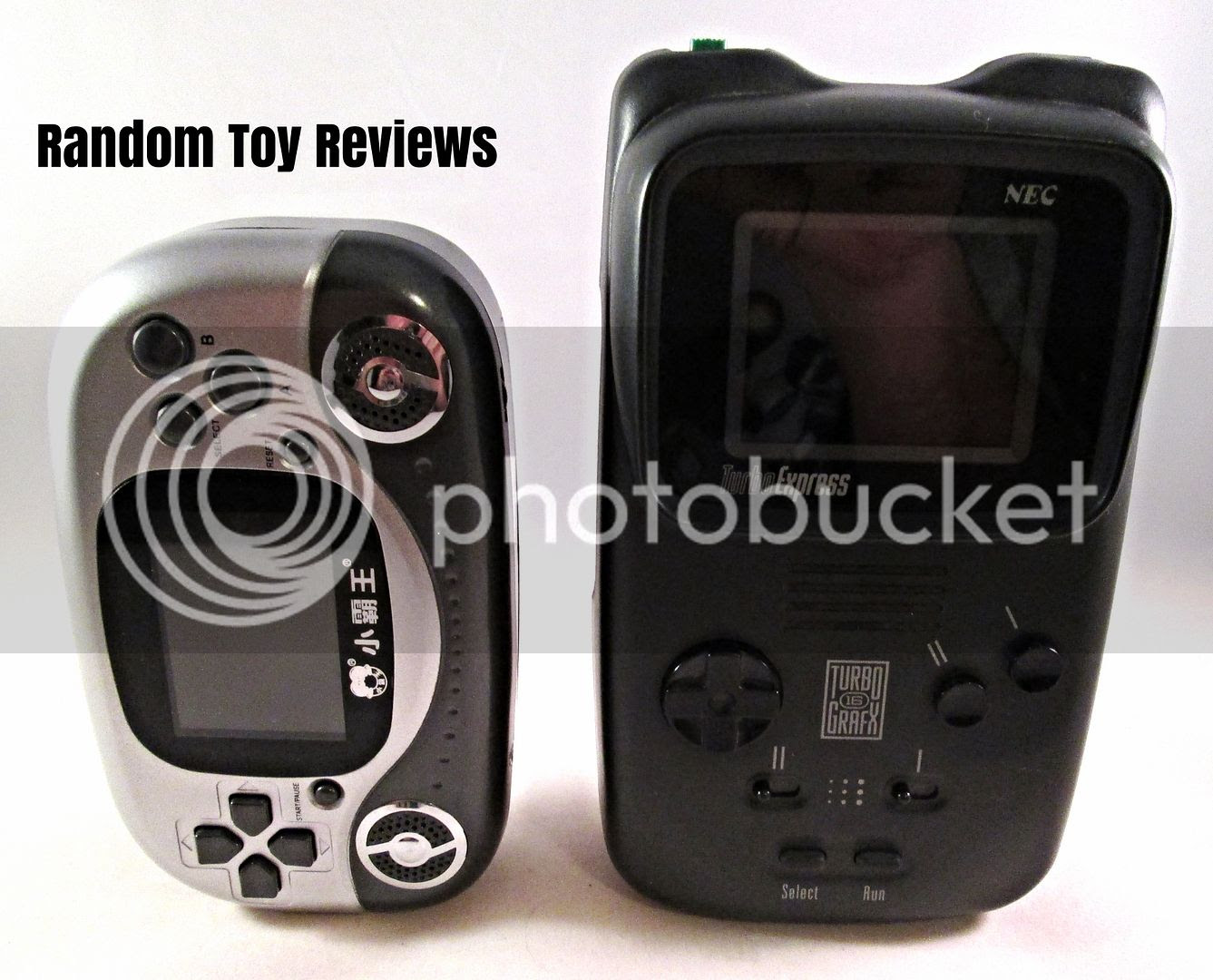 Here are a few comparison shots to hopefully give you an idea of the system's overall size. I apologize that I didn't pull out any of my Nintendo handhelds as most of them are currently scattered across the house. I did have my recently recapped NEC Turbo Express handy though. If you've seen the Turbo Express in person, then you know it's not a little system.

OK, so it looks good enough, but how does it play? Is it good? Or better yet is it worth buying? So far I have to say Yes to all accounts.

I've got near 40 authentic Famicom games in my collection and while I haven't tried them all yet, everything I've thrown at it has worked. My first attempt was playing Konami's Parodius. The small screen may not be ideal for shooters, but it looked, sounded and controlled good. Next I tried a few other random games including Downtown Nekketsu Koshin Kyoku: Soreyuke Dai Undokai (it's a game in the series that gave us the awesome River City Ransom!). Again everything worked perfectly. The only glitch I had was when I played Tokkyu Shirei Soruburein (or Super Rescue Solbrain). It's the Famicom version of the NES classic, Shatterhand. The game ran fine, but it seemed like the cartridge rattled around in the game slot a little more than the the games. Eventually the screen was garbled and it froze. I got it working again, but I don't think the problem was with the handheld. I popped the same game into my Famicom AV console and pretty much had the same problems with the game not loading or having jumbled images on screen. With a little fiddling of the cartridge on both the Famicom and the handheld I was able to get it working and enjoy some robust game time. 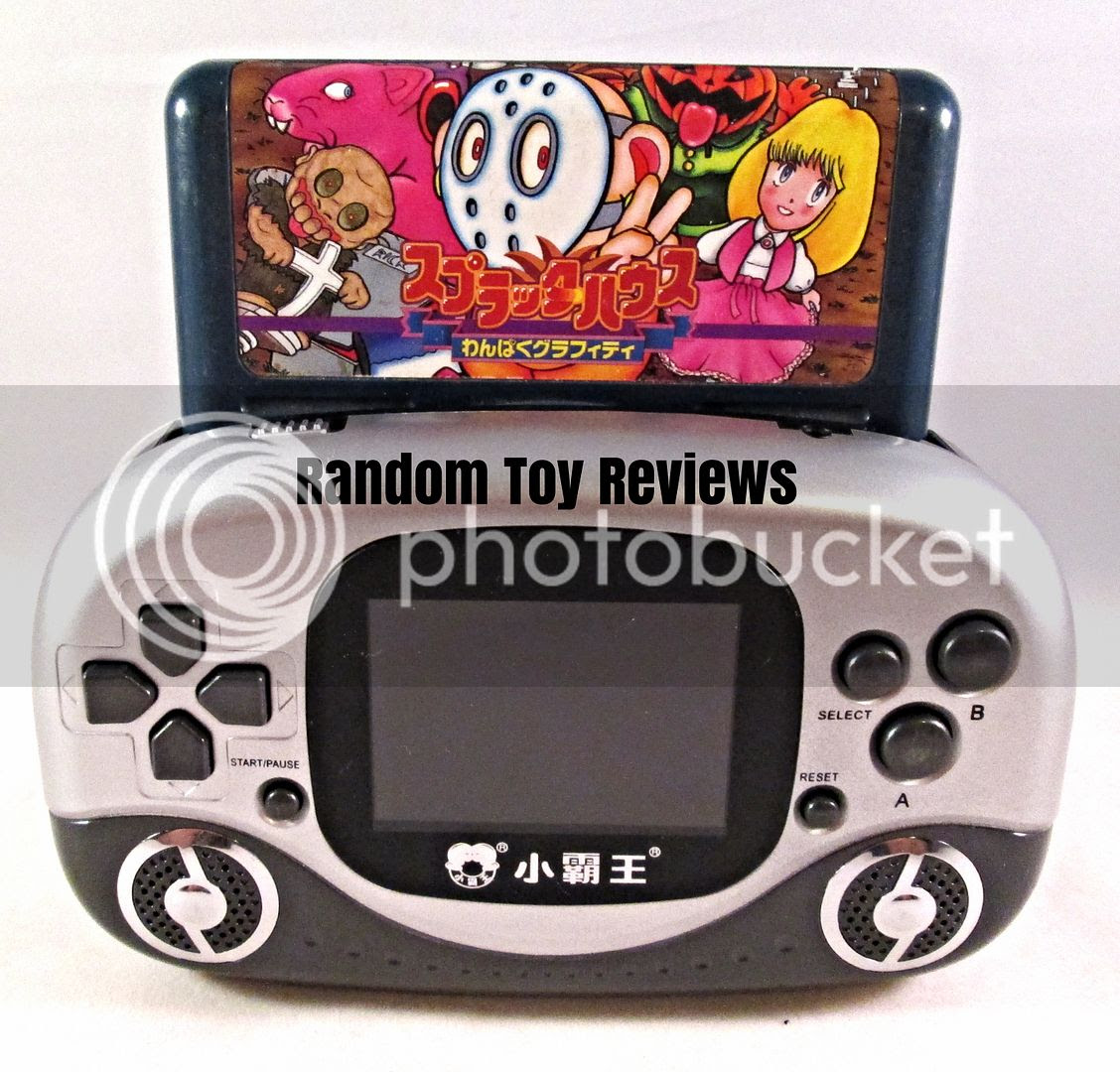 Another nice feature about the system is the height that which the cartridges stick out when inserted. Some of these handhelds I've seen just look goofy with their extra add-ons inserted or even with a big 8-bit NES game sticking out. Thanks to the smaller Famicom carts, you don't have to worry about having some obtrusive game sticking out the top. Even the slightly larger Namcot carts don't look too bad.

I would have rather the system had a traditional solid D-Pad instead of the Sony Playstation like 4 directional buttons, but the controls were rather responsive and the buttons didn't seem to be mushy feeling. Same goes for the larger A & B buttons. They felt comfortable underneath my thumbs and the on screen actions seemed to happen at the same time the buttons were pressed.

I will say that I haven't tried out the A/V hook up yet as every single A/V input on the TVs in my room are strategically set up. Having near 20 consoles hooked up at the same time means lots and lots of cords with multiple switch boxes everywhere! I do want to try this out however as I'm curious to how well it translates over to the big screen. I also have tried out the headphone jack either. It's rare that I play my handhelds with the volume at a level it may disturb others so I just don't have headphones just lying around. I would assume the feature sounds good as the speakers on the system itself pass my test.


I don't have a good video camera and I couldn't find what I did with the old trusty Flip Video Camera we have, so I haven't been able to capture any game play video.

Overall I've got to say that I'm impressed. The quality of the build isn't Nintendo quality, but it's far more solid than the little Hyperkin clone I use to play my NES games on. For the price I paid of $30, which included (overseas) shipping, I think it's a great deal. If you like to play your games on the go and are tired of playing dedicated portable games, then why not give this a try?