When Hasbro unveiled the Bot Shots line I didn't know what to think about them. Small, super deformed like toys that transform when crashed together. OK, I can dig that. Figures can be used in both online battles and as part of a game to play with your friends. Mix in a paper, rock, scissors type game play. Hmm. Honestly I never thought these would get that far and here we are with Series 2 recently being released at retail.

Series 1 featured all the same style crash and transform mechanism, no matter the style of vehicle. The front of the vehicle would be depressed and release the spring. Out popped the arms from the sides and the feet would pop out from underneath, effectively launching the figure up to land on it's feet...most of the time. 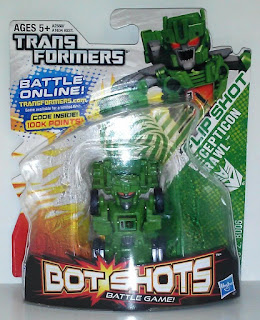 Series 2 however mixes it up a bit and introduces Blitz Shot, Flip Shot and Spin Shot. Gone are the molds used in Series 1. Now you have better sculpted robots and a variation to the way they transform when crashed. Personally I was glad to see Hasbro change things up a bit because otherwise this gimmick could have gotten stale.

I haven't really played the game with anyone in person, but I am looking into creating a Bot Shots tournament for a Transformers convention coming to my hometown of Charlotte, NC (Charticon) later this summer. I don't know if kids really play with these much, but I like the concept better than Hasbro's last attempt at Transformers figure game, Attacktix. 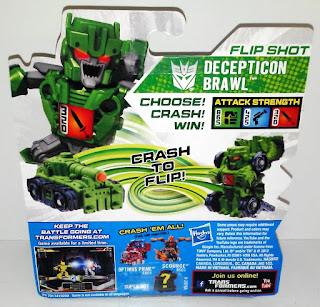 The packaging hasn't changed much since Series 1, however the back of the blister card does a better job explaining how (in this case) the Flip Shot gimmick works. The bottom also points out that the game can be taken online at Transformers.com and there are other Bot Shots so you can "crash 'em all!". 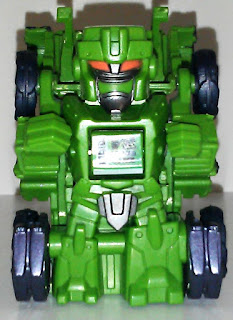 The best thing about the different types of transformations now is that you get more unique, character specific molds. Deception Brawl here for example looks great. With his square shaped head and green color I'm going to say he is based on the G1 Combaticon character. At this point I'm only buying the G1 characters.

In robot mode Brawl has his fists up and in front of him as if he's ready to go toe to toe with Floyd Mayweather. He also has a great facial expression as if he's laughing in some mechanical tone. If you look at his legs carefully you can tell they have been sculpted as if his left leg is placed just a bit in front of his right leg. This sculpting couldn't have been done with the Series 1 Bot Shots due to the transformation. His stats are the following:

Paint apps are kept to a minimal, but what do you expect from a $4 toy? I just wish Hasbro would've included some black paint or to the inside of the mouth...the exposed green plastic just looks weird. 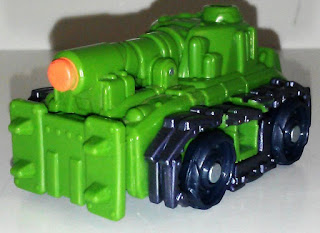 Brawl's alternate mode is a tank, but obviously some liberties were taken here as he doesn't quite look like his G1 self. I have to say that this is one of the best looking Bot Shot alt modes released so far. Even though he has 4 free rolling wheels, the designer did a good job working in tank treads around the wheels. The toy needs the spring loaded plate on the front to trigger the transformation - hence the large "spiked" plate on the front. As for the rest of the tank there is quite a bit of detail sculpted included. You can tell Brawl was the love of some designer's labor.

Any time you have a spring loaded transformation gimmick there will be times when it just doesn't want to operate as designed. Lord knows a lot of my earlier figures wouldn't land on their feet when crashed together. This new Flip Shot gimmick however is all over the place. I crashed Brawl several times and he only landed on his feet once. Maybe it's just because the spring is still so tight since its new and perhaps with subsequent crashes this tension will improve. As you can tell from my cell phone video Brawl just didn't want to cooperate and land on his feet.

This is a great, fun little toy. I like how Hasbro has taken these to the next level. From what I've seen of Series 2 it appears some of the Beast Hunter characters will be making their introduction into the line. While I'm sure some people will be excited, I just hope they continue to release more G1 characters.
at 3:08 PM