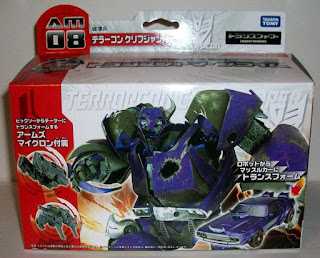 When TakaraTomy sent out solicitations for AM-08 how could you not want this figure? Even though Cliffjumper didn't quite look like this in the Transformers Prime cartoon (being purple and all), this figure immediately jumped up on many people's want list - including me.

Exclusive to Japan, Terrorcon Cliffjumper is a translucent purple "redeco" of the First Edition Cliffjumper mold. Throw in a new Micron, C.L. and you've an excellent new toy to place on your Decepticon/Destron TF Prime shelf. 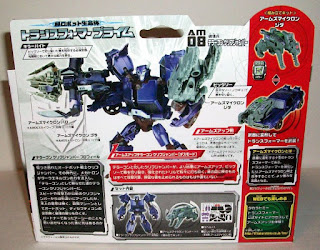 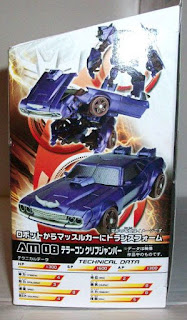 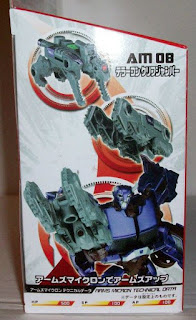 Terrorcon Cliffjumper comes packaged in the now standard Arms Micron boxes. Not only does it show his Micron, C.L. interacting with the toy, but other Microns (sold separately). 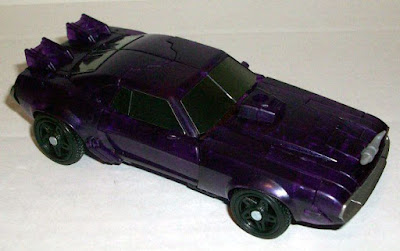 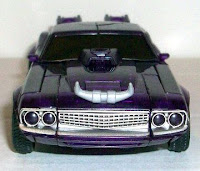 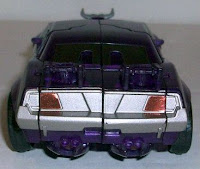 As you can tell there are a few mold changes for the Arms Micron release. Added are Micron ports to the car's hood and rear of the vehicle. I personally don't mind these small additions. If anything it just gives the car more "character".

Being an Arms Micron release means stickers. The windshield and windows are all black metallic stickers along with the tail lights. These stickers were nice and heavy feeling and nicely cut - they were very easy to apply. Thank you TakaraTomy for that...the stickers have deterred me from opening a lot of these Arms Micron toys. 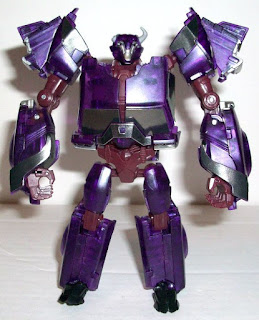 Outside of the purple translucent plastic, maroon was used for the other robot bits. This all comes together nicely and gives off an evil vibe. A few more stickers were added to 'bot mode - around the hands, above the waist and on the shoulder pieces. 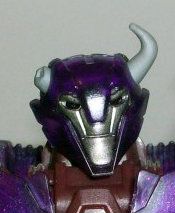 The new head sculpt looks equally as impressive as does the rest of the figure. I love the look of the broken horn. 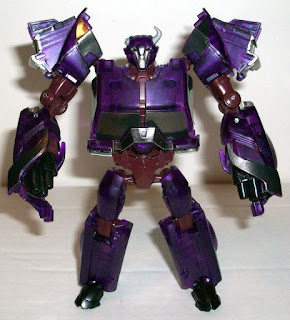 Cliffjumper still retains his blasters that are hidden underneath this forearms. Simply lift up the forearm panels and rotate the fists around and wha-la! 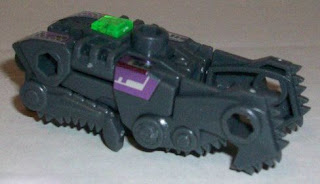 The included Micron is an interesting one. C.L. transforms into what appears to be a double chainsaw type on weapon. At first I wasn't sure about him from the pictures I saw online, but once in hand he has become one of my favorite of these new snap together Microns. 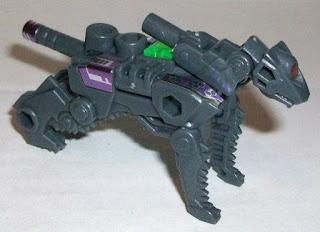 The little guy was challenging to assemble. The sides of the figure are actually two large pieces that attach to the center via clips. These were very tight and hard to snap on.  I want to pick up the red recolor of this figure, but I hope he goes together easier than C.L. A lot of people early on dubbed this little guy Ravage and I can see why. He does resemble some sort of feline. Like with most of the Micron figures the majority of the stickers on the sticker sheet go on him. Thankfully his stickers are fairly big and apply easy. The only sticker you may need a toothpick to apply is the little red sticker for his cyclops eye. 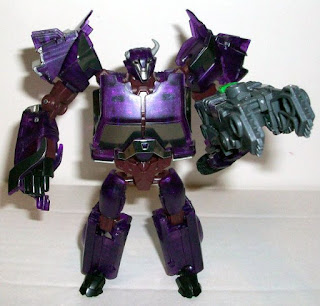 Now that there has been a Terrorcon Bumblebee figure released in Japan, Cliffjumper will have another Terrorcon to pal around with. I'll eventually get that BB opened, stickered and photographed as well...just depends on how many dang blamed stickers I'll have to mess with!

Being an exclusive to Japan this version of Cliffjumper may set you back a little more than a typical Arms Micron release. I can't necessarily recommend him to everyone, especially with the SDCC and the upcoming First Edition Terrorcon versions floating around out there. It's a great figure none the less with in my opinion one of the best new animal based Microns.
at 10:00 AM