In my never ending quest to arrange my cave at home like I want it I present another toy that I needed to open to review and display. I miss those days when some of the non-U.S. released TFs could be had at a bargain. Thankfully I was able to pick up Falcon and a few other UK exclusives fairly cheap in one lot. 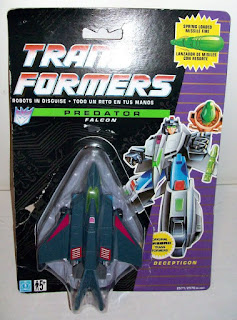 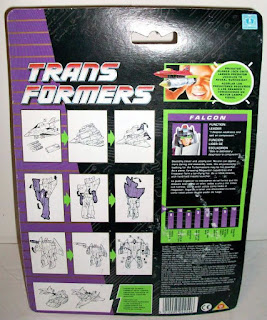 Falcon is part of the Predator subgroup of Deceptions. Only released in Europe and parts of Australia (and later released in Japan as part of a versus set) these jets were some of the last toys released under the G1 banner. 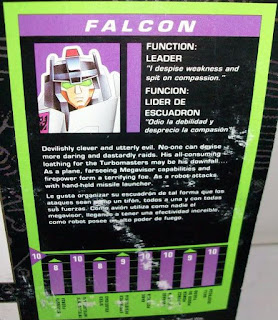 Falcon is the leader of the Predators (I always thought it was Skyquake) and apparently doesn't think too much of the weak.

Each Predator jet features a gimmick like their cohorts the Stormtroopers. Underneath is a flip down Megavisor target reticule with a picture of an Autobot. Alone you can't really activate this feature - you need either Stalker's missile or Skyquake. 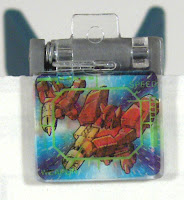 Once plugged in the Megavisor is flipped down and you can see the Autobot just waiting to be obliterated. 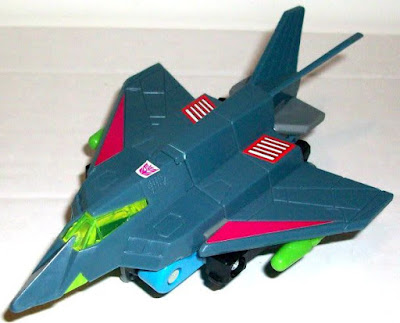 Falcon transforms into a Lockheed F-117A Nighthawk stealth jet. It's not my favorite jet of the group, but still impressive. I can't help but think this toy should have been released in the G2 series thanks in part to the colors used. Now the blue gray for the jet is fine, but the neon yellow plastic in the cockpit, bright stickers and neon green missiles are a bit much. How you can be all stealthy w/ neon colors everywhere?! 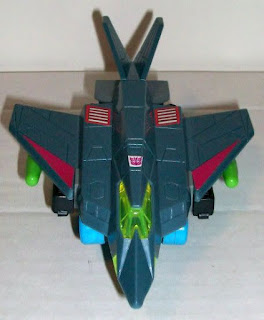 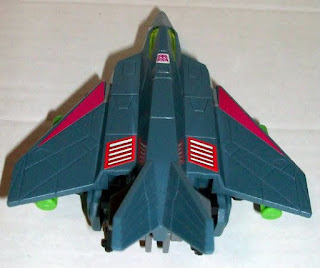 The 4 small Predator jets are small. They aren't even comparable in size to a modern day deluxe Transformer. 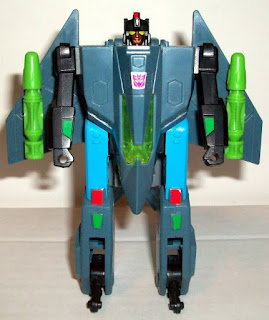 Like with most G1 TFs the transformation is very simple. Articulation? What articulation?! The arms move up and down and that is it. Falcon features a nice head sculpt and some great light piping on the back side of the head. 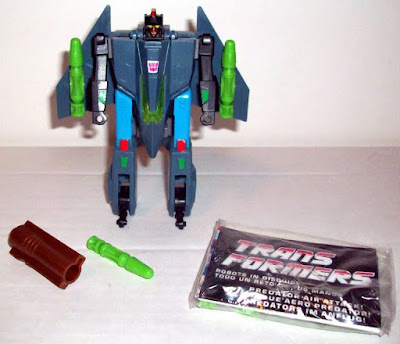 Falcon comes packaged w/ 3 green missiles, his bronze/gold launcher and instructions/catalog. It's been said many times before beware of the launcher. The launchers are notorious for suffering from GPS (Gold Plastic Syndrome). I won't even plug the gun into his hand let alone load a missile inside it. If you are brave enough (or stupid as I to think) the gun can be pegged into jet mode as well.

While the Predator toys certainly won't win any awards they are fun little toys and represent some of the last G1 toys released. They aren't extremely hard to find nor are they expensive so if you get the chance go ahead and jump on it.
at 10:00 AM