This is probably one of the few times a Beast Machines toy will make this blog. Ever. While it took me awhile to be able to 1) watch the animated television show and 2) appreciate the show the toys were a whole other animal.

Towards the end of the line when it was branded "Battle of the Spark" we got some decent toys like the excellent Motorcycle Drone, Tank Drone or even Battle Unicorn. We also got Hammerstrike. 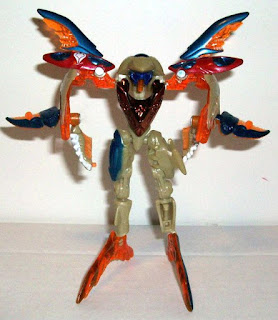 Bio: Not known for his intelligence or cunning, Hammerstrike is the best there is at what he does - destroy Vehicons. Of all the Maximals, Hammerstrike is the most battle hungry. Insatiable appetite for combat; devastating "frenzy" assault leaves few Vehicon survivors. Knows no fear, feels no pain and has an endurance second only to Cheetor. Calculating and fearless, Hammerhead gives the Vehicons a good reason to stay out of the water.

For some reason I was so excited about getting this toy when it was released in early 2001. Now I look at the mess of a toy and wonder "what was I thinking?!" We'll start off with the bad (i.e. the robot mode) so we can get it out of the way.

Hammerstrike has to have one of the most spindly robot modes I've ever seen on a Transformer toy. The only defined limbs are the legs and the tail fins which surprisingly provide some stable feet. The upper torso including the shoulders, arms and hands are a complete mess.

The lower jaw of the shark doubles as his hands and are utterly useless. I use the word arm very loosely here. There isn't a defined elbow and the arm is hinged rather high on the shoulder. The shark fins on the arms and back of the shoulders are very annoying and just get in the way. I suppose you could pop them off if you wanted to. Didn't really try much w/ this craptacular figure. 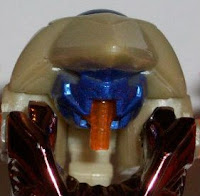 The other low point of the robot is the head. Just look at this thing. Can you even tell you're looking at a robot's head/face? I'm guess the eyes are the two indentations on the sides. You're guess is as good as mine what that translucent orange piece is hanging down.

With the toy being a modern Transformer there is a bit of articulation to be had in robot mode. The legs attach to the hips with ball joints and there are hinged joints in the knees. The feet/fins rotate a full 360 degrees. The range of motion in the top half is very limited which really hampers this already suffering robot mode.

The one redeeming quality of this figure and the only reason worth buying it is the alt mode - a techno-organic hammer head shark. 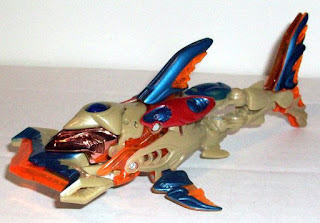 Surprisingly the colors work well for this toy. Between the primary beige, translucent orange plastic and the metallic blue paint it all blends well. He does have a small section that has been chromed in a metallic bronze color a la the Beast Wars Transmetal 2 toys. So far mine has aged well and shows no signs of the chrome starting to peel or flake.

In shark form you can move his side fins up and down while the rear section that forms the robot's legs has a greater range of motion. Hammerstrike also features an attack mode so the speak. His spark crystal on the top (blue orb) also functions as a trigger that activates a battering ram on the crest of the head. Mine doesn't work all that well. Even if it did the orange plastic doesn't extend very far. 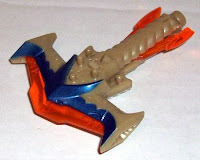 The head portion of the shark removes to form a weapon of sorts while in robot mode. Whether it's a gun or some sort of melee type weapon I'm not sure. Either way I'm not a fan. 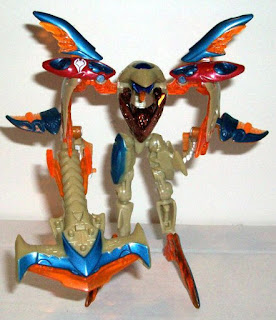 Unless you are a Beast Machines completionist I really can't recommend this toy. Yes the shark mode is a fairly decent (albeit small) the rest of the toy just isn't that worthy of adding to your Transformers collection. That said I only bought this toy to review and warn others! 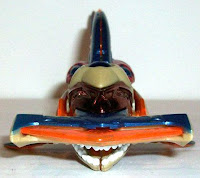 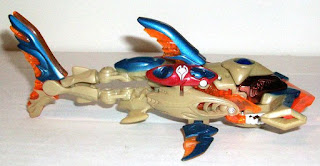