Masters of the Universe Origins: Roboto 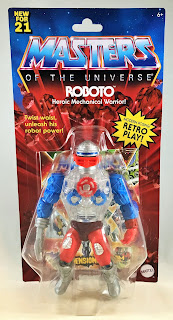 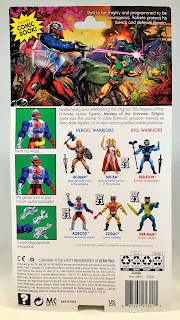 It's no secret that I'm a fan of robots so when I first learned of Roboto as a kid in the 80's I was instantly a fan. Mattel has faithfully recreated this heroic mechanized warrior for the Origins line. The packaging is your standard Masters of the Universe design complete with exploding red lava rocks in the background. The yellow starburst talks about "Retro Play" which I assume is referencing the toy's gimmick...which happens to be listed on the other side of the blister bubble. 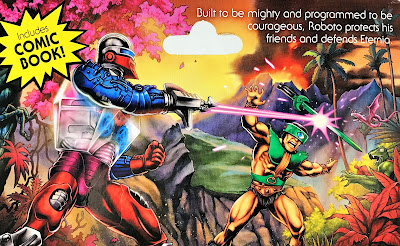 The card back features some gorgeous artwork across the top, while the left side demonstrates the gimmicks. In the center is a cross sell featuring other figures released in this 2021 wave. 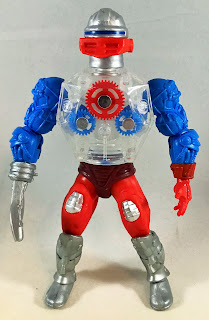 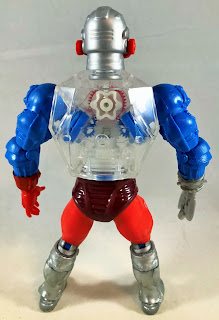 The original Masters of the Universe line was known for re-using body parts to create new characters, however Roboto has a lot of original parts, including the chest. Cast in translucent clear plastic, you can see the gears inside the chest. When I first saw pictures of this I was glad to see the gears were intact, but I had wondered if it would impede the removable head and limbs that the Origin figures feature. Surprisingly this feature on this version of Roboto is still intact! Roboto has so much cool stuff going for him, from the circuitry molded into his arms, the removable weaponry to the head sculpt. 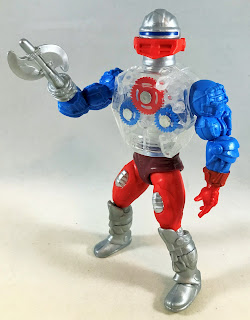 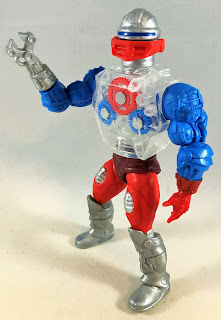 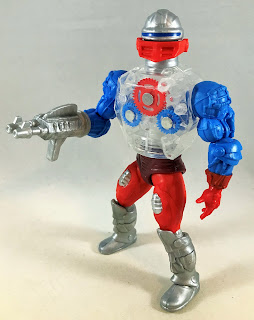 While you can swap the hands on any Origins figure, Roboto takes this one step farther with detachable weaponry. Out of the package he comes with his battle axe already attached, but if that type of bladed weapon isn't your cup of tea you can switch it out for a claw or a laser gun.
I found this figure to be a lot of fun, a highlight of his wave. He seems to also be a fan favorite and I can see why. Now I'm eagerly awaiting to see if he'll get a figure in the new Masterverse series. 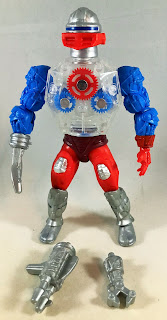