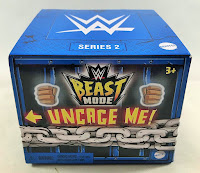 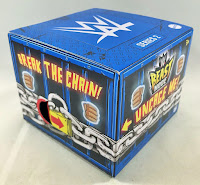 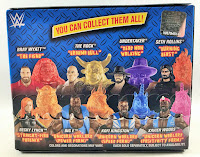 Back in February of 2021 we took a look at the new WWE product, Beast Mode. These blind packaged figures come in a box with a perforated strip around the sides that looks like a chain. The idea of this release is that the wrestler's "beast mode" is caged inside the box. Part of the draw here is being able to "uncage" the mystery creature inside. While series 1 came in red boxes, series 2 came in blue boxes. I only found them at my local Walmart on one occasion, then they seemed to dry up until I started seeing them show up at Ollie's discount stores.

Series 2 seems to have some hold overs from the previous series (but with a different colored beast shell), but does introduce new figures such as Becky Lynch, Bray Wyatt and all three members of the New Day. 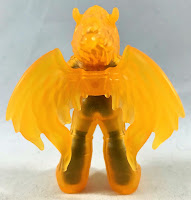 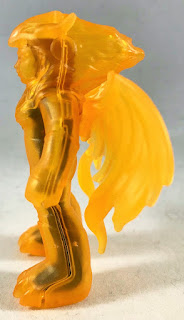 Each package contains one small WWE wrestler figure along with a plastic animal shell that can house the figure. The included insert refers to Becky's beast mode as "Straight Fire Phoenix" and to be honest I'm not sure what to think of it. It's a cool mold, but how does it tie to Becky? Wouldn't a Beth Phoenix figure made more sense? Becky moves more merch so I get why she was chosen, but I think Mattel may have tried a little too hard with this paring. 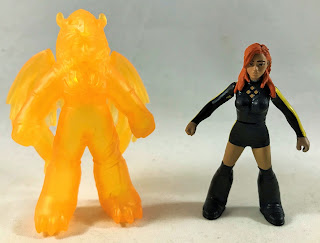 The beast mode shell is cast in a translucent orange plastic. The details in the plastic don't really come out on camera and have to be held in hand to appreciate the overall look. The small figure of Becky is based on her days when she was known as "the Man". It does a decent job at capturing her likeness. I believe most wrestling fans will know who this figure is mean to be.

The figure stands at about 1 inch or so tall and is non-articulated. The paint apps are decent and Becky has way more paint than the Rock did that I pulled from the first series.
Overall these are fun little toys to unbox, but not something that I'd seek out or really want to buy many more of. I was tempted to grab another when I saw them at Ollie's as I wanted at least one member of the New Day, but that is for another day
at 10:04 PM