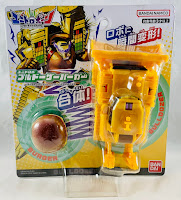 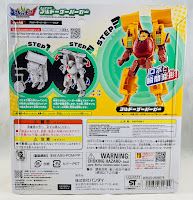 When I first saw the solicitations for this new line of transforming/combining toys from Bandai I wasn't sure what to think. Then I heard they were in the Machine Robo universe I was a little more intrigued. All of the designs in the first wave were wild...a combining taxi and Christmas tree, a beetle and a locomotive? Well the combiner bulldozer and hamburger was enough to pique my curiosity so I sought it out and ordered it.
Once it arrived from Japan I was a little surprised that the packaging was basically a large blister card. In typical Japanese fashion, the blister wraps around the cardboard backing, allowing the card back to be slid up and out of the plastic once cutting the tape that holds it all together. I do like this type of packaging as it allows you to re-package the figure after opening.
The card art is a little crazy and busy. There is a music vibe that carries through the line which plays into the art. Both the burger and the bulldozer toys are easy to see from all angles. Flip the package over and there is a 3 step transformation/combination sequence. If you're a old school Transformers an as I am, these are reminiscent of the Decepticon Duocons in that you have two pieces that combine to form the robot, complete with spring loaded assistance. 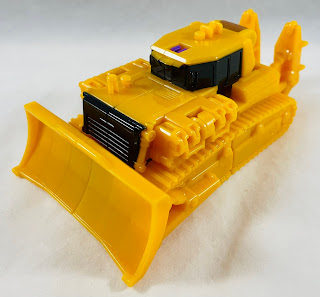 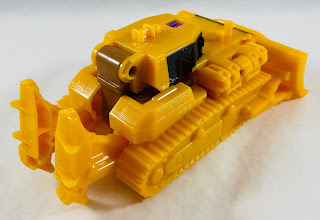 The bulldozer is larger than I thought it would be, falling somewhere in between the size of a current deluxe and voyager size Transformer. The only paint apps on the dozer are around the canopy and the front grill, both featuring black paint. I would have been nice to see some paint apps on the treads and other places, however the molded detail will suffice. There are four small brown wheels on the bottom of the treads that allow the bulldozer to roll freely on a smooth surface. On the top of the dozer you'll find a small peg and tab where the burger combines. The Transformers fan in me wouldn't mind seeing this piece repainted in Constructicon green! 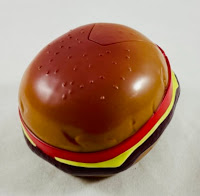 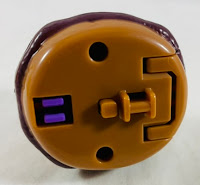 At first glance the hamburger looks like a beefed up (no pun intended) McDonald's McChangeable toy...however this burger doesn't have a mode of it's own. The top bun as some small sesame seeds while along the edges you can see what appears to be a tomato slice on top of a slice a cheese, all sitting on top of the hamburger patty.
On the underside of the hamburger you'll find the same two type of connection pegs that are on top of the bulldozer's canopy. These are basically a male and female connection that once lined up and pushed down/together will activate the transformation/combination. 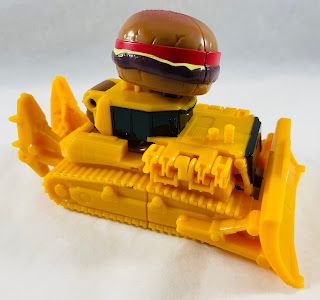 Yeah, I know, it looks silly. Once you have the two pieces in place, push down on the burger and it'll activate the spring loaded transformation. Be ready though as it will spring out of your hands, literally! 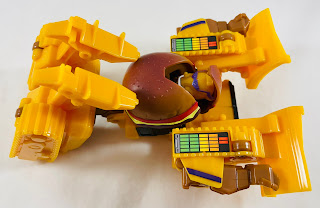 The sides and the back half of the bulldozer will spring forward giving you a better glimpse of the robot mode. The robot's head pops out of the burger which is now firmly attached to the robot's chest. To complete the transformation you just simply fold down the arms and fold out the legs. 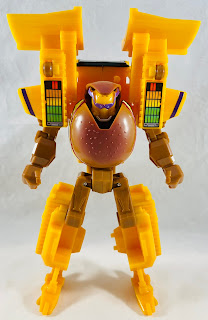 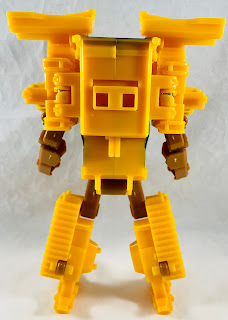 Once you unfold the arms and legs you have your completed robot form. The arms, crotch and thighs are molded in a light brown which matches the darker brown of the burger. These shades of brown blend well with yellow of the bulldozer. 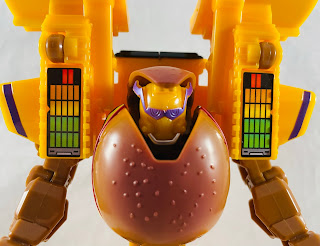 On each shoulder are stickers of a small audio equalizer bar, which goes with the musical theme of the line. This is even carried over to the eyes of the robot. Look carefully and you'll see the eyes are actually two music notes! It looks as if he is wearing a pair of metallic lilac shades.
To go back to bulldozer and burger forms, simply pull the burger from the robot and flip the head back in. Fold up the arms on the dozer and flip the legs back over until everything tabs in together firmly.
This has to be one of the more zany toys I've purchased form Japan in some time and I love it. I'll be honest when I say I wasn't sure what to expect, but once I got my hands on this set I went back and forth combining the set multiple times. I'm not completely sure how Bulldozerburger will look in my Machine Robo display, but perhaps I'll give them their own display as I definitely look forward to purchasing more from this line. 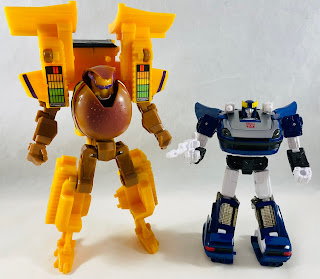 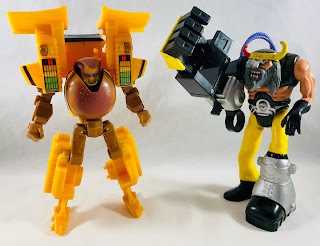 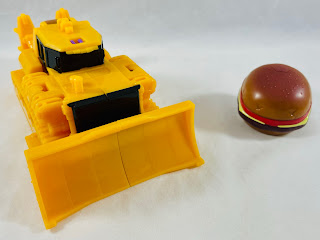