Masters of the Universe Origins: Stratos 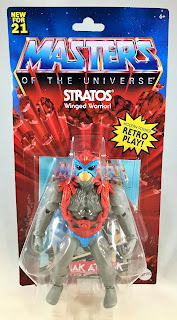 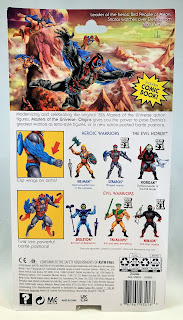 I don't recall the time period in 2021 that Stratos was released in the Masters of the Universe Origins series, but he was another of the "core" characters from the MOTU world that I remember as a kid. It wasn't until the Mike Young Productions cartoon series and accompanying 200X toy line that I came to really appreciate the character.
Like with all of the Origins releases thus far, he comes packaged on the iconic MOTU card with the exploding red rocks in the back ground. He comes packaged with the "Sneak Attack" mini comic that all the figures in his wave had. The back of the card has some beautiful artwork across the top, while the rest of the back showcases the features of the toy along with a cross sell for additional figures. 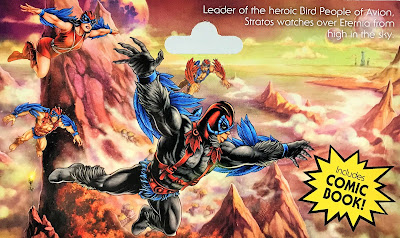 The Origins line seems to be performing well at retail for Mattel so I wonder if any of the other Bird People will ever see action figure form as depicted in the beautiful card art? 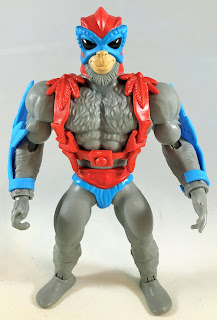 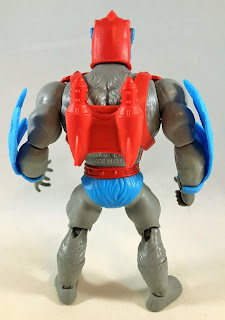 Stratos, the winged warrior, sports the original color scheme from the 80's. There is a comic version that has since been released that sports a different color, but I just haven't been compelled to pick up that version since this is the one I'm more familiar with. The original toy used the Beast Man body, but I'm not sure if that carried over to the Origins figure. Regardless, Stratos still has his hairy chest he's known for. His removable red jet pack makes a return and looks nice. I wish the engines on his back had some paint detail. His blue wings come unattached in the package, but easily attach to his wrists. If you prefer red wings, you can swap them out from the Masters of the WWE Universe Rey Mysterio figure.
Articulation is standard and the limbs and head are removable which is par for the course for the Origins series. If you are fan of MOTU or Stratos in general, I can see no reason why you wouldn't enjoy this modern update of the character. 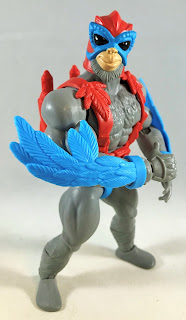