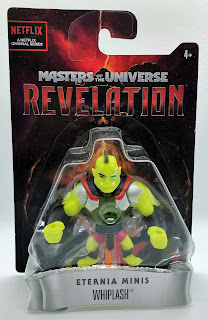 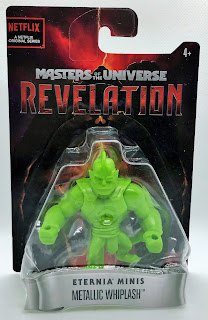 Mattel's Eternia Minis line returns for the new Netflix animation show, Revelation. These small PVC figures are based on the new character designs, of which we'll take a quick look at one of Skeletor's henchmen, Whiplash. Also included in this first wave of figures was a chase version of Whiplash, cast in a metallic green. I'm not sure what the significance of this color is, but since I like the character I grabbed it anyway.
The packaging went a darker route for the Revelation series, which is fitting since the show is a little darker, more serious than the old Filmation show. In the background you have Castle Grayskull from a looking up perspective. The darkness is only broken up by a patch of ominous looking red sky with a single lightning bolt coming down. Across the bottom of the blister is silver ribbon with the character name. 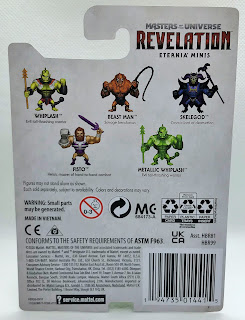 Flip the small package around and you'll see the entire wave of figures including Beast Man, Skelegod and Fisto. The latter is the only character that I didn't pick up as I opted for the version packaged with Stridor, but more on that later. 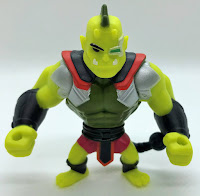 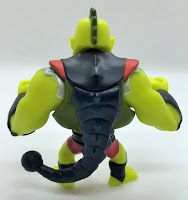 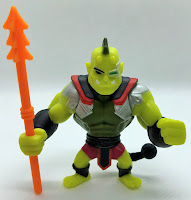 For the Revelation series Whiplash (like a lot of the character) got a make over if you will. Most likely thanks to Tri-Klops, Whiplash now has a techno like eye and sports some more sophisticated armor. The applied paint apps are done well for a figure this size. He still comes packaged with his familiar orange spear weapon. 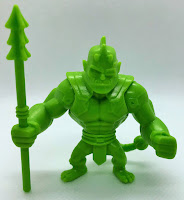 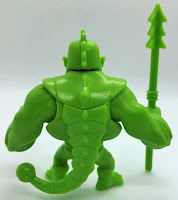 The Metallic chase version is devoid of any paint apps. The green plastic comes off a little darker in my pictures than the way it looks in hand. I ended up seeing his figure way more often at retail than I should being that it's supposed to be short packed, but I'm guess people just didn't care for it. 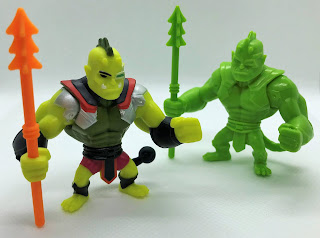 I really dig all of the Eternia Minis thus far and find them to be fun little "desk toys" to distract me from my real job. While the regular release of Whiplash is fantastic, I can only recommend the chase version if you're a completionist or just love the character. 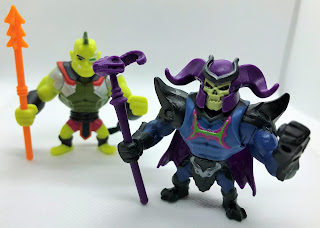 Email ThisBlogThis!Share to TwitterShare to FacebookShare to Pinterest
Labels: Eternia Minis, Masters of the Universe, Whiplash