The Cyberverse series of Transformers has been pulling in characters from other TF series and even though there are plenty of characters based on their G1 selves, I didn't see a new Gnaw toy coming. Last released in the Titans Return series, this version of the Decepticon Sharkticon shares a lot with his "little cousin", but also brings a few new tricks to the table. 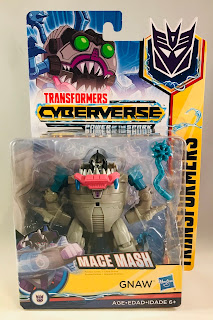 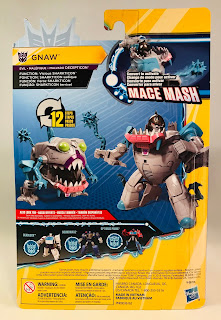 I was a little shocked to find Gnaw at a Target a few weeks ago. He must have just been put out on the sales floor because when I went to check out the toy didn't scan at the register. While I don't go hunting for toys like I once did, I still have yet to see another Gnaw at local retail.

Gnaw is part of the Power of the Spark subseries in the Cyberverse series. Like other Warrior class toys, he has a gimmick called "Mace Mash". We'll look at that in a bit. Packaging is your standard fare for the series, however I'm digging the new artwork at the top of the blister card.

Upon taking Gnaw off the pegs, I could immediately tell that this toy looked a lot like the Titans Return version, only bigger and beefier. In the G1 animation / movie, he was always portrayed as a hefty 'bot in both robot and beast mode. I'm glad that this toy takes those cues as he has more girth than the smaller Legends scale Titans Return mold. 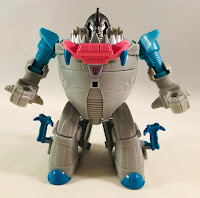 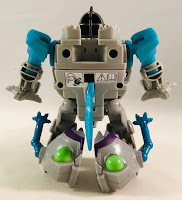 Out of the packaging you can really tell Hasbro "upscaled" this mold in some ways. The figure's construction is similar to the Titans Return mold and transformation is pretty much the same. Looking at the rear of the figure however you'll see some changes. First of all the shark fin is much bigger/longer as this acts as a lever for the Mace Mash gimmick. You can also see two stickers on the back of the figure - one is an instructional sticker for the gimmick while the other is a warning. I thought about removing these, but once you transform Gnaw these stickers are concealed.

Articulation is limited this time around. His head does turn side to side, but the plastic that houses the hinges for the mouth does restrict some of the movement of the head. His arms are attached with ball joints at the shoulders so you've got a good range of motion there, but at the elbow are these odd joints. It's possible to pull the arms off at this joint if you aren't careful. The stubby little legs attach to the torso using ball joints. The knees are on a hinge, but the Skarkticon kibble on the back of the legs make it tough to pull off any good action poses. I do want to point out that the little Sharkticon arms on the sides of the legs are not poseable. 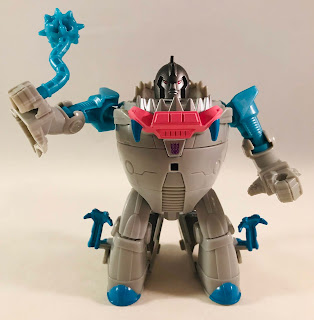 Gnaw comes packaged with his mace which also acts as his tail in beast mode. He has a great head sculpt and his colors are pretty spot on to his G1 self. Overall he has a great look and I wouldn't mind picking up another one for the collection at some point.

I mentioned his Mace Mash gimmick before. Basically you unclip the lower jaw on Gnaw's chest to disconnect the top half of the figure from the lower half. Then you reach around to the rear and push the blue shark fin down/in. It's on a spring so it'll come back up and you can keep pressing this down/in as much as you want. With each press of this fin the top half spins around. If you're old enough to remember the Berserkers from Thundercats, Gnaw spins around a lot like Topspinner. 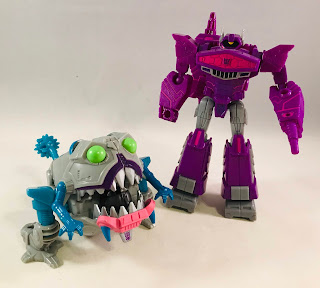 I only own one other Warrior class Cyberverse figure, but he seems to scale well here with Shockwave. 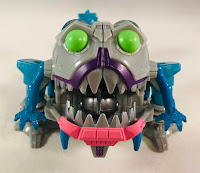 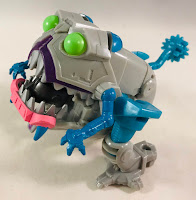 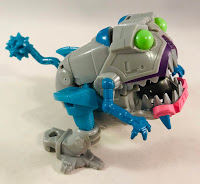 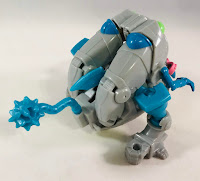 Transformation from robot to beast mode is basically the same as the Titans Return version. You collapse the upper and lower jaw around the head, folding up the legs behind the figure to form the main body of the Sharkticon. Position the arms, which are now the legs as you like and clip in the mace to form the tail.

Again I love the colors and the big, beedy green eyes are awesome...however I just can't get past how the robot head is still visible in the mouth of Gnaw. I also wish the blue shark fin on his back would stand up a little higher in this mode.

If you can look past these minor issues this is a great looking Sharkticon figure in my opinion. I really wish I could have got to the cabinet where my G1 Gnaw is on display so I could have provided a few comparison shots, but alas my office/toy room floor is/was a mess and I didn't have a clear path to him. However I was able to grab the aforementioned Titans Return version so let's check that out. 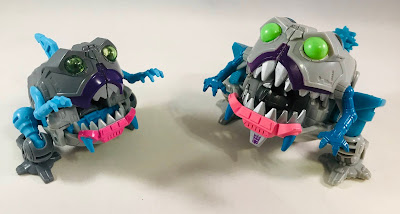 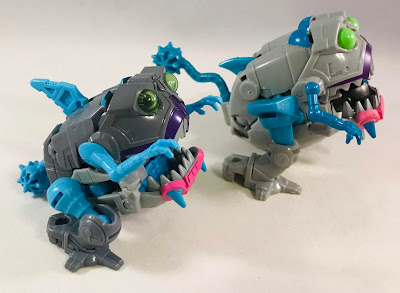 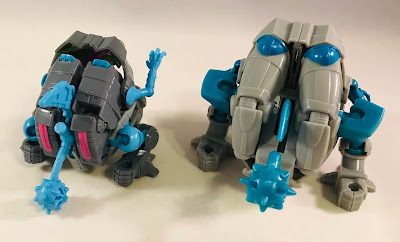 Other than the size differences, the other major difference is the shade of gray plastic that was used. The Cyberverse version of Gnaw uses a much lighter gray and better resembles his G1 self. The eyes are opaque lime as opposed to a translucent darker green. There are additional paint apps to the upper row of teeth. Mold wise, the arms/legs attach to the body much higher than the Legends version. 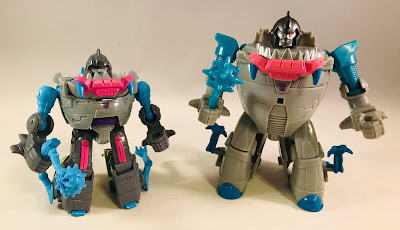 In this shot you can see why I said the Cyberverse version has more girth. The body itself is wider and longer than the Legends version. The robot head is more prominent as well.

Overall this is a great Cyberverse toy. I know this line is aimed at a younger Transformers audience, but a character like Gnaw had to be thrown in to appease the older generation of TF fans. While I don't care for the gimmick, it doesn't detract from the figure too much. Gnaw in my opinion looks great in either mode and most importantly is a fun figure. Since I opened him he has been one of my deskbots and has often been fiddled with, going back and forth between robot and Sharkticon. 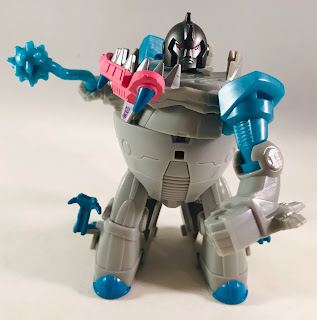