Hasbro's Transformers Cyberverse series of toys moves into a new phase, subtitled Power of the Spark. With this new series of toys comes Spark Armor and a new sizes: Battle Class and Elite Class. I was quick to dismiss these new toys and their gimmicks, but I when I saw them on store shelves I was intrigued enough to at least give one a try. I chose Cheetor as he was a Target exclusive. 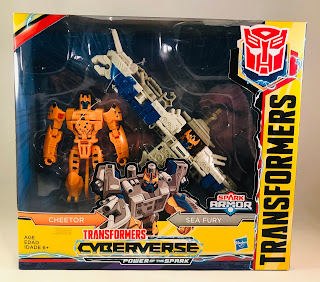 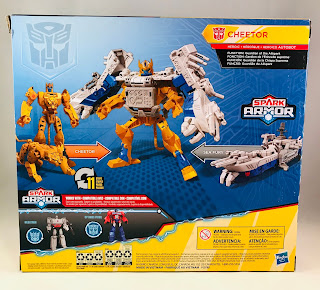 Cheetor is part of the new Elite Class size and comes packaged in a big window box. This allows you to clearly get a good look at the toys. Strange to see Cheetor again, but it's a welcomed sight in my book.

One side of the box has generic Cyberverse artwork of Optimus, Grimlock and Bumblee, while the other side features new artwork of Cheetor himself. 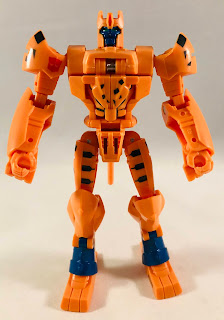 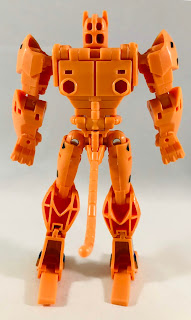 Cheetor was pretty light once I was able to free him from his plastic and cardboard prison. Hasbro continues to leave many of the limbs on the toy hollow. It's a nice sculpt however, especially the face of Cheetor. He's got a very slim and sleek look to him, something his original Beast Wars toy couldn't do. He has a few paint applications in robot mode. He retains his animated green eyes and blue face. There are a few black spots on the figure, but not as many as their should be in my opinion.

Articulation is limited, but surprisingly better than I would have anticipated. He features ball joints so if you put too much pressure on a limb it'll safely pop off. You can rotate his arm at the shoulder a full 360 degrees. His elbows have a swivel joint allowing about 180 degrees of motion, but some of this is because of the transformation. Hinge joint at the elbow. No waist swivel, but the legs can fully rotate forwards and backwards and he can even pull off a full split. There is a little bit of swivel to the legs, just enough to rotate the legs outwards a little. Hinge joint at the knee. No ankle rockers, but thankfully he does have large heels that fold down to help stabilize the figure.

If you were wondering, Cheetor without his Spark Armor is close to a Warrior Class (deluxe). My only real gripe of Cheetor's robot mode is his tail. It's just there. It doesn't fold up, in fact if you do fold it up it stops at a 90 degree angle. If you leave it down it shows too much through his legs. Small gripe, but valid none the less. 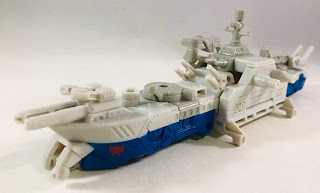 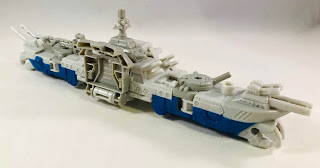 Cheetor's Spark Armor is called Sea Fury. I have no idea if these armor suits are controlled by the Transformer partner or what. I doubt they'd be sentient robots themselves. Either way Sea Fury is more impressive than I figured he'd be. The battleship is just over 6 inches in total length so it's not a small toy. Unfortunately none of the guns on the ship move. There is an anchor piece that flips out, but that's about the play value of the ship itself. I do want to point out that on the front hull of the ship is a red Maximal faction emblem. Cheetor himself sports an Autobot faction emblem. Interesting... 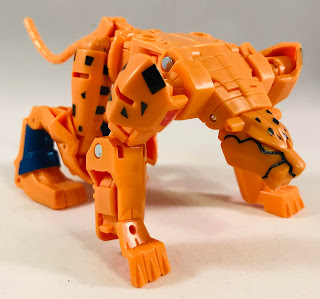 Transformation from robot to cheetah is pretty straight forward with 11 steps. I couldn't help be reminded of an old Playskool GoBot, Preditron, while I was transforming Cheetor. A few more steps of course, but I guess it was how the robot head flips into the chest and the beast head rotates up and into position. I do like how the legs collapse to form the rear legs. They look very powerful. Other than the robot fists showing on the side of his front legs, this is a pretty nice (stylized) beast mode. 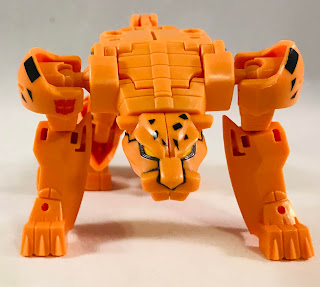 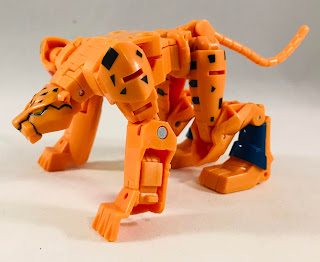 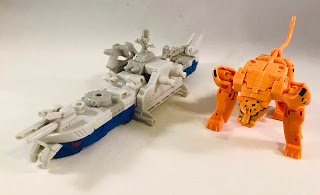 What does a cheetah and a battleship have in common? Nothing...but there is "more than meets the eye" here. 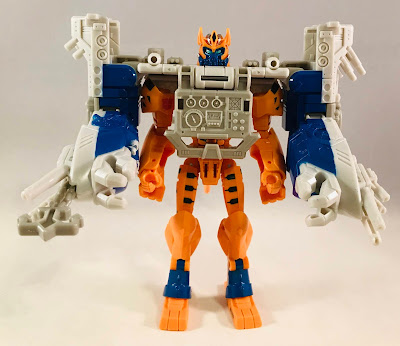 Sea Fury basically fits on the bag of cheetor like a large backpack using two pegs. As you flip the ship/armor down over Cheetor's head, the ends of the ship fold down into position. This I wasn't expecting! The armor more or less gives Cheetor an armored helmet and two large gauntlet like arms. The Spark Armor does hinder the articulation of Cheetor's arms, but he can still move them a bit. 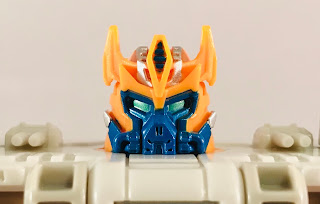 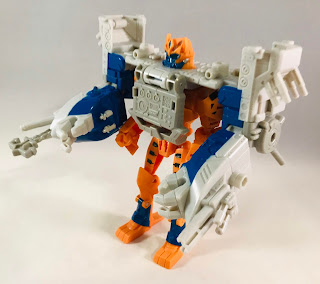 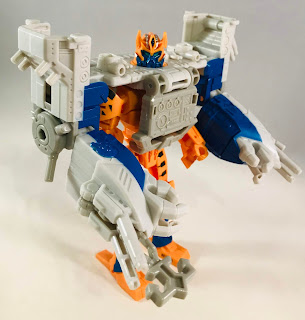 Once Cheetor is all armored up he's pretty menacing looking. I thought that when combined with Sea Fury he would be top heavy, but those large flip out heels he has really helps to stabilize the figure.

I would think younger Transformer fans will really like this toy and some of the other Spark Armor releases. I know this figure isn't necessary aimed at my demographic, but I found this to be a fun figure. He'll most likely become my new deskbot for awhile. I don't know if I'll chase down the Bumblebee figure as it's too similar for my tastes. Cheetor here is an odd choice on many levels, but it's fun having a new Cheetor toy regardless.
at 3:50 PM