A few years before transforming robots would captivate this young kid of the late 70's, I would become a fan of Hasbro's GI Joe franchise. I still have several vivid memories of my childhood, receiving certain figures, vehicles and playsets. While I may not have stuck with GI Joe all the way through the Real American Hero's life span, I was always a fan.

Hasbro introduced so many different play patterns with the original A Real American Hero (ARAH) toy line that I believed helped the line's overall longevity. One of these play patterns was the introduction of different themed subgroups within the Joes or the enemy, Cobra. One of these that I always enjoyed was Destro's Iron Grenadiers. I never saw Destro as firmly a Cobra character, but one who was just along for the ride, leeching off Cobra to get what he wanted. Eventually Destro would form his own army that he dubbed the Iron Grenadiers.

As a kid I only owned a Destro and his Despoiler vehicle and the A.G.P. vehicle. I wanted more of course, but money and space were always an issue with the ARAH line. Hasbro would make several different vehicles for the Iron Grenadiers, but most of them I'd never own yet alone see in person. Eventually I lost my desire to play with most of my GI Joe toys, giving way to Transformers.

Several years ago I decided to try my hand at customizing some old GI Joe vehicles, re-purposing them for Cobra. I had seen a lot of cool customs at that time in the forms of HISSTank.com and on YoJoe.com. I really had no idea what I was doing at the time, but it was fun. I did 4 different projects of sorts before I had to call it quits due to the change in seasons. I quickly found out that spray painted plastic did not do very well once the temps outside started to drop, so I hung up my spray cans...that was until earlier this year. By the way, I have galleries of my previous custom jobs over on the main GI Joe index page.

I decided to go with more of a theme this time around with my custom vehicle painting. No more would I stick to Cobra blue and black, but I'd try my hand with the Iron Grenadiers theme. I had to think long and hard about what vehicle to choose to start with. Preferably I wanted to try a vehicle I never owned as a kid, but one that wasn't too costly and didn't have too many parts. I eventually settled on the Cobra Parasite from 1992. This gaudy neon colored troop transport had potential, but those colors had to go. Once I was able to find a near-complete vehicle in my price range, I pulled the trigger. Once it arrived I removed all of the accessories and parts and gave them all a bath in warm soapy water. Once dried, I started to tape off sections and get to work painting. I decided to stick with black as the base, highlighting the various parts in red and gold. For being my first custom project in a few years I was very happy w/ the final outcome. 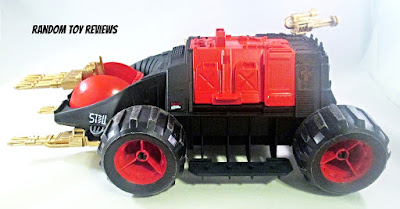 I chose to use the red on the vehicle itself, using the gold for the various weapons of the vehicle. While the shade of gold isn't a direct match with the gold plastic Hasbro used in the 80's, it's close enough for me. If you're wondering what those gold round things are on the side, those are landmines. Originally there was a catapult on the top that would actually fling the toys, but mine was incomplete and I eventually had another idea on how to use the now mostly flat top of the vehicle. 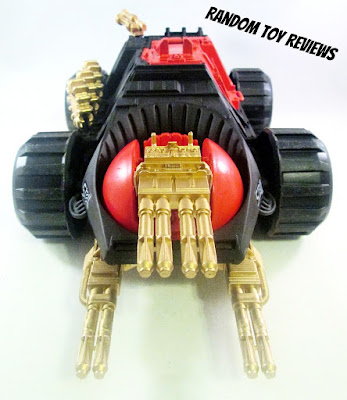 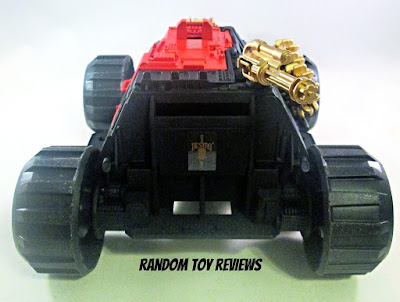 At the time I decided to go with the Parasite as the base for this project, I didn't realize their was a tow hook on the back bumper. This lead me to doing another project, which I hope to share very soon. 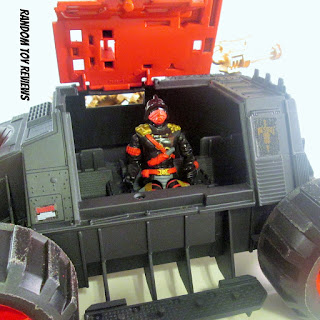 After I completed this vehicle I actually had to go out and purchase an Iron Grenadier action figure! Like most adults who grew up with stuff like this, my childhood toys were sold off long ago and due to space constrictions just haven't re-bought many old ARAH vehicles.

I have come to like this vehicle however and I think it makes a pretty decent trooper carrier. There are six seats in the inside, but I'd image it'd be a tight fit if all the seats were occupied. There are also plenty of pegs around the vehicle for additional figures to "hang on" to the vehicle. 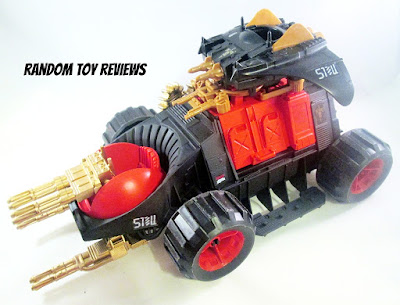 Since my vehicle was lacking the catapult on top, I began wondering if this vehicle I was "creating" could also double as a transport of sorts for Destro's Despoiler? Turns out the top of the vehicle was a near perfect fit for Destro's chariot. 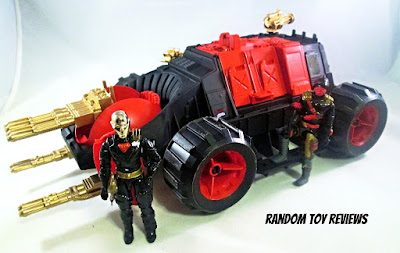 I rounded out the vehicle with a few replacement decals I had and a few Iron Grenadier logo decals. I used flat black Walmart brand black paint for the base, Krylon Fusion for the red and Valspar metallic gold paints. Because I'm still a novice at this I didn't try to seal coat anything because I wasn't sure if it would ruin what I had already painted, but thankfully there aren't a lot of moving parts on this vehicle so if I'm careful, the paint should hold up fairly well.

I had a blast painting this toy over the course of a several weekends this summer. I had so much fun that this project gave me even more ideas that I would eventually see through. I have one large project still in the works, taking a lot more time (and money) that I originally anticipated. I'm not sure if I'll keep this or part with it, but with the Joe brand essentially dead at the moment I find it fun to revisit a line that brought me much joy as a kid.

P.S. - I've been asked how I came up with the name Iron Sycophant and honestly it was pretty easy. Since the original name of this vehicle was the Parasite, I just searched for a simile to parasite and I thought sycophant sounded cool!
at 12:39 PM